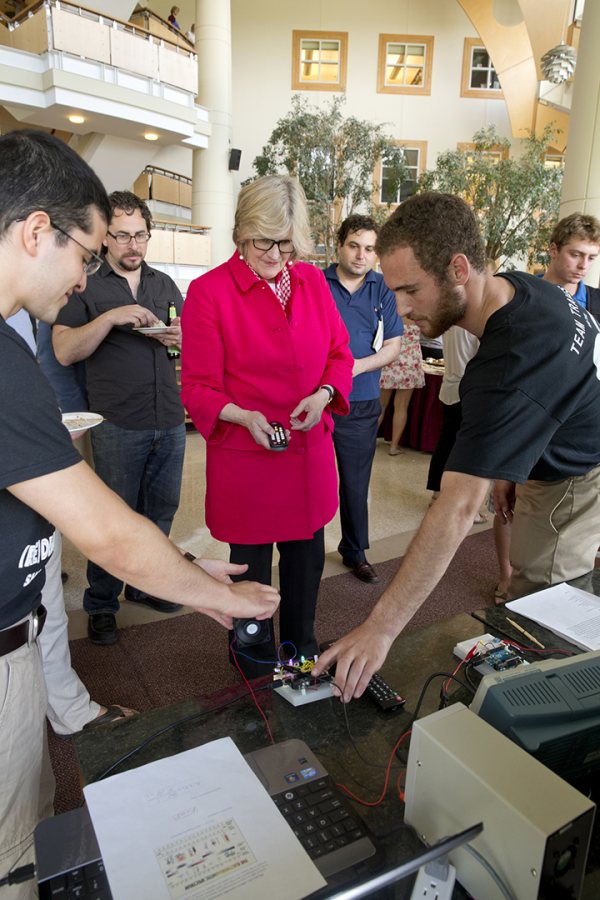 Was it déjà vu all over again?

The easels in Perry Atrium with eager students standing by, ready to discuss what they learned in class projects. The crowd of faculty, friends, and fellow students avid to hear those presentations. The breakout session ready to go in a nearby Pettengill classroom.

Not to mention the hustle and bustle around the buffet. But if a visitor was reminded of another academic bonanza, the signature Mount David Summit nearly two months ago, this end-of-Short Term gathering was its own kind of happening: The second annual Curricular Innovation Showcase.

Introduced by a droll President Clayton Spencer as a “wild rumpus,” the May 27 showcase was a window into two academic programs that debuted last year in pursuit of major Bates goals — and that have taken Short Term to the next level as an incubator for curricular development.

Involving students as integral partners, the Course (Re)design program speaks to a comprehensive effort to make the curriculum more current and relevant than ever. Meanwhile, as part of the Purposeful Work initiative, the Practitioner-taught Courses give students a chance to learn about real-world work from non-faculty teachers, mostly alumni, who have built robust careers in disparate occupations.

Both programs generated a slate of Short Term courses distinguished by bold thinking and deep student involvement. And the outcomes of those courses, exploring topics from music production to environmental geochemistry, were on ebullient display at the Curricular Innovation Showcase. 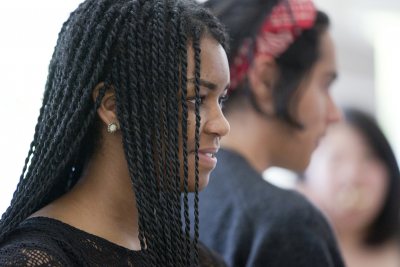 Shannon Griffin ’16, a double major in Chinese and psychology from Philadelphia, took the “Practicum in Restorative Justice and Mediation,” one of the five practitioner-taught courses. Griffin was attracted by the theme of restorative justice, but ended up intrigued by the mediation piece, taught by Elaine Bourne of the Community Mediation Services Program, Volunteers of America.

The class envisioned scenarios that could bring Bates students into conflict — with each other, with local residents, even with the college administration — and worked with Bourne to understand how formal mediation could alleviate the conflict.

“It’s about being nonjudgmental, not taking sides, not making decisions, but basically being there to facilitate the conversation, have ground rules about respect and make sure both sides feel they are being represented equally,” Griffin explained.

Her particular interest lay in a topic current in Lewiston: the impact of student voters on local elections, with some residents feeling that people who aren’t in town for the long haul shouldn’t have a say in major issues. 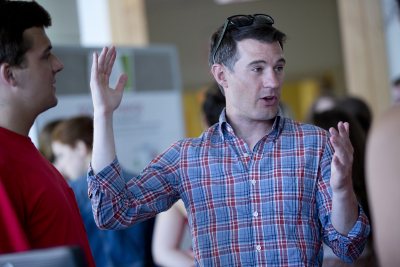 Mike Lydon ’04, principal at The Street Plans Collaborative, led the “Practicum in Urban Planning,” which included the creation of a bike lane in downtown Lewiston. (Phyllis Graber Jensen/Bates College)

The course “just gave me skills for daily life,” she added.

Also on the practitioner-taught side, students in “Entrepreneurship,” taught by Darrell Williams ’86 of HealthTech Maine, pitched business ideas in a nearby classroom. In the atrium, two practitioners communed as a headphone-wearing Craig Saddlemire ’05 (“Social Change Organizing and Advocacy”) grooved to sounds fine-tuned by students in “Music Production, Recording and Mixing” as engineer-producer Jonathan Wyman ’97 pointed out nuances.

When Matt Auer, dean of the faculty and vice-president for academic affairs, looks at the Course (Re)design program, which uses Short Term to develop courses that will live on for years as part of the fall-winter curriculum, “it’s hugely renewing and exciting,” he said in his showcase welcome.

Intriguing in and of themselves, each of the five course-design programs addressed a different curricular need. Recognizing the need for Bates to better address the looming role of Big Data in academe and beyond, for instance, economist Nathan Tefft met it head-on with “Big Data and Economics.” 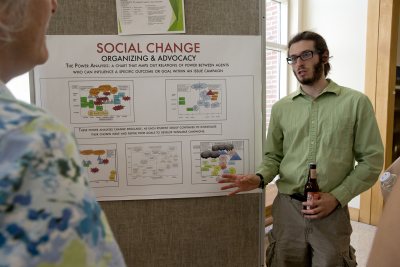 Physicist Travis Gould, meanwhile, worked with students to design new laboratory projects exploiting the Arduino line of open-source microcontrollers. His goal: updating the longstanding Short Term course “Electronics Laboratory” — which Gould happened to be teaching even as his (Re)design students were designing new projects for the next time around.

His early goal for the Short Term course was to create two new lab units, Gould said. “In the end, the (Re)design students produced six new labs in total. Considering that none of them had any previous experience with microcontrollers or the programming language we used, this is impressive.”

“This is enough material for about half of a full course based on modern electronics,” Gould explained, adding, “The students absolutely blew me away with the level of maturity, thoughtfulness, and hard work they put into this course.” 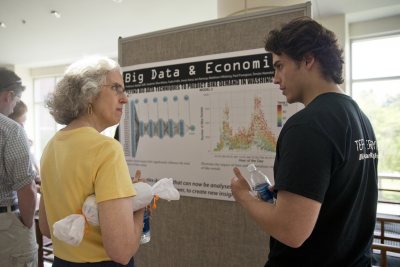 The student role in Course (Re)design is huge, said Kirk Read, professor of French and francophone studies and associate dean of the faculty. “The luxury of having students right there in the class to say, ‘Boring! Here’s why that’s not going to work, or here’s how it would work better’ — in real time as you redesign something, or build it from the bottom up — is an incredible benefit,” he said.

And the students gain as well as give. “Having small groups of students work with professors on designing or redesigning a course,” Read said, “teaches them so much about teaching and learning — not to mention the content of the course.

“I just think in terms of going back to the roots and principles of Short Term and what it was originally all about: experimentation, cooking up new ideas, intensive experience, a close-knit group of people. This is the total answer to that.”