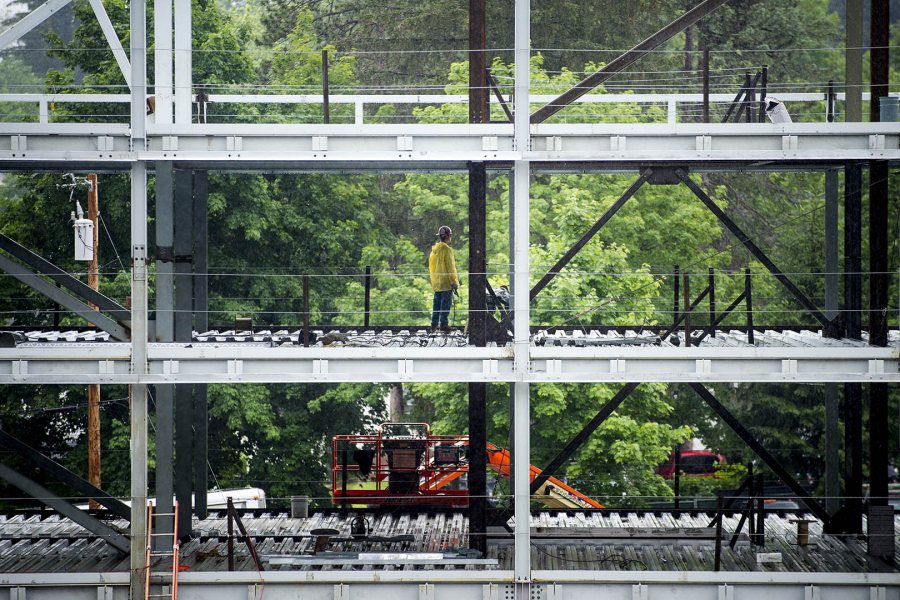 Work continues through the rain at 55 Campus Avenue on July 1, 2015. (Josh Kuckens/Bates College)

Getting Here From There Dept.: As Campus Construction Update’s mother always says, “Underground utilities work is like a box of chocolates. You never know what you’re going to get.” 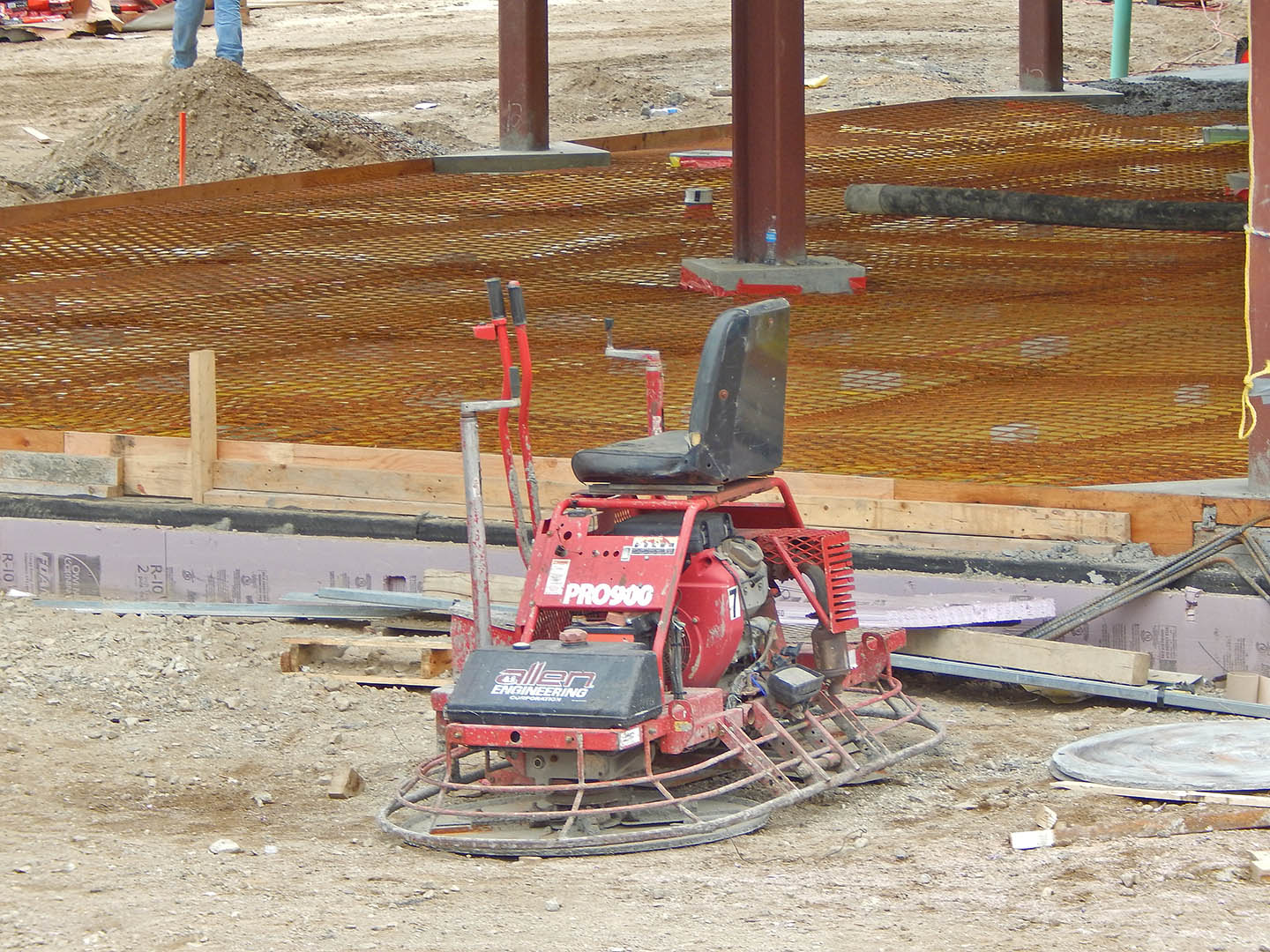 The Allen Engineering Pro900 ride-on trowel, photographed at 65 Campus Ave. on June 12, 2015. The rusty material in the background is steel mesh reinforcement for the concrete floor slabs. (Doug Hubley/Bates College)

This was borne out in the preliminary stages of a street excavation related to the Campus Life Project during the week of July 6. When workers opened up Campus Avenue, explains Bates project manager Chris Streifel, “they found sewer lines that aren’t at the elevations that they expected, water lines in locations different than expected, other utilities that aren’t shown on any plans — presumably abandoned utilities, from a bygone era, that didn’t make the maps.”

Construction management firm Consigli Construction will work with the city and the college to figure out what those abandoned pipes might be. So a new plan is being developed for the utilities work. Updating what we told you in June, a full closure of the Campus Avenue entrance to campus (between Chase Hall and Muskie Archives) is now planned for July 13–17, with sporadic partial closures into August. 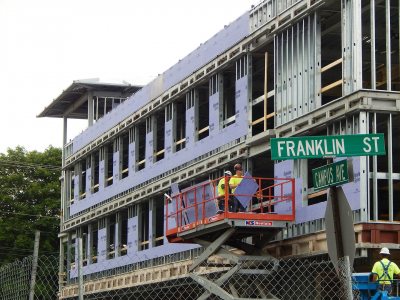 And readers should expect to encounter frequent partial and full closures of vehicle traffic on Campus Avenue throughout July.

Hello, walls: In mid-June, Campus Construction Update was bemused by the sight of something resembling a bumper car zipping around on the second floor of the 65 Campus Ave. residence.

It turned out to be a “ride-on trowel” — a riding machine used to smooth freshly poured concrete. It moves on two whirling rotors or fan-like arrays that both propel the machine and treat the concrete. The blades drive down the coarser elements in the concrete mix, leaving the smoother “cream” at the surface. 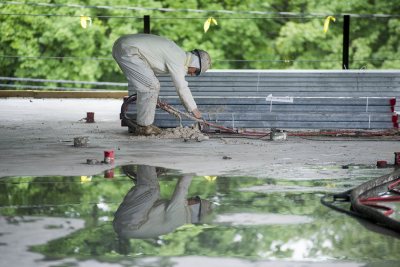 Steering with joysticks that cause the rotors to tilt on their axes, the operator can send the machine in any direction. And it moves pretty fast. Fun.

Along with pouring floor slabs and riding around on them, workers made good progress spraying sections of the steel framework with fireproofing, a cementitious plaster that preserves structural integrity in the unlikely event of a fire.

But there’s bigger news at 65 Campus. The dramatic views through the open framework of the new student residence are fast disappearing. Workers have installed many of the metal exterior wall studs and, starting around July 7, have made quick progress in covering the studs with gypsum wallboards on the side facing Campus Avenue.

The wallboards, an attractive purple resembling grape bubble gum, will later be coated with a thin moisture-blocking skin, and finally sheathed with either granite, high-performance Taktl concrete panels, or bricks. (If you’re out strolling with your 8-foot stepladder, as we often are, peek over the construction fence at 55 Campus Ave. and take a look at the wall mockup for a visual representation.) 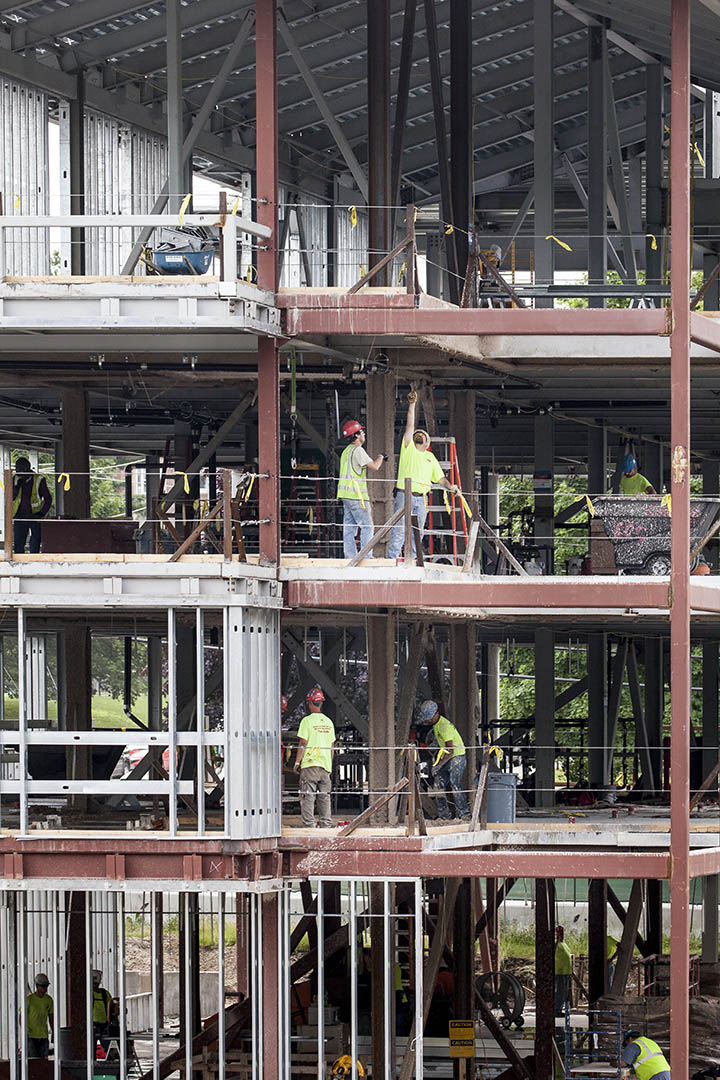 The bricks are especially interesting, and should be coming out of the kiln any day now at Morin Brick, a firm located in Auburn, across the river from Bates. As project manager Streifel explains, “They’re really working hard for us to make a new brick they’ve never made before”: an elongated style called the Norman brick.

The Norman is the same width and height as a standard brick, at 3 5/8 and 2 1/4 inches respectively, but is nearly half again as long — 11 5/8 inches. Visually, the Normans will further emphasize an already pronounced horizontality in the new dorms, but they’ll be laid in a pattern that provides contrast.

This so-called Flemish bond pattern alternates full-length bricks, aka stretchers, with short bricks, or headers, in a contrasting color. Bates’ Chase Hall is a good example of Flemish bond (not to be confused with the Ian Fleming Bond pattern).

Streifel estimates that some 160,000 bricks, counting headers and stretchers, will end up covering the two dorms. Bricks will be tested for size and strength as well as salt content, which indicates the potential for efflorescence — that phenomenon when minerals bloom out whitely onto the brick’s surface in response to moisture. 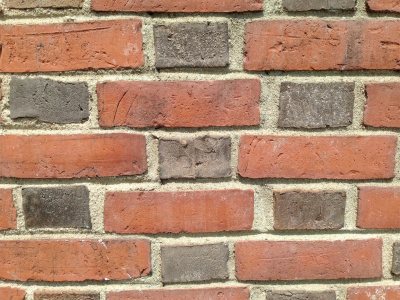 Morin bricks are abundant at Bates, including in the 2008 dining Commons and the renovations of Hedge and Roger Williams halls, reopened in 2011. Founded in 1912, Morin serves the Northeast and Canada, with its products visible on such landmarks as the Boston Harbor Hotel and Toronto’s historic Fort York.

Between No. 65 and No. 55, Streifel suggests that exterior wall work and window installation is likely to progress into early winter. Getting the buildings weathertight, of course, is a priority that only gains urgency as the cold weather approaches. 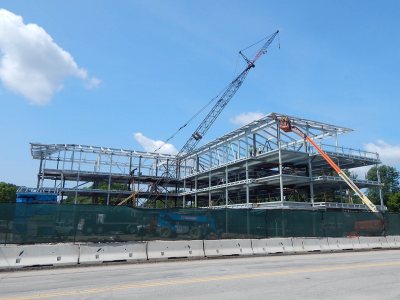 Beaming with pride: As recounted in words and pictures by a Bates Communications team, a topping-off ceremony at 55 Campus Ave. during the afternoon of June 26 symbolically marked the conclusion of steelwork for the two Campus Life Project student residences.

Covered with signatures from members of the campus community, and embellished with the traditional evergreen tree (and the increasingly traditional GoPro camera), a beam was hoisted by the Link-Belt crane and fastened into place on the 55 Campus Ave. dorm by workers from Stellar Steel. Bates President Clayton Spencer and others spoke during the event, which drew more than 100 people.

“It was a great event — very successful,” Streifel says. “It marked a poignant transition for the project. We had great participation from faculty and staff, the contractors, and the community. It was what we wanted.” Though a traditional practice in the building of steel-framed buildings, the celebration was the first such event at Bates in recent memory.

As noted, though, the ceremony was symbolic. Heavy steel work continued the following week at 55 Campus, while installation of shiny corrugated roof decking and finish work will likely go on a bit longer.

And then watch for the concrete truck and the ride-on trowel.

Can we talk? Campus Construction Update welcomes your questions and comments about current, past, and future construction at Bates. Write to dhubley@bates.edu, putting “Campus Construction” or “I don’t get the Ian Fleming thing” in the subject line. Or use the 21st-century commenting system below. 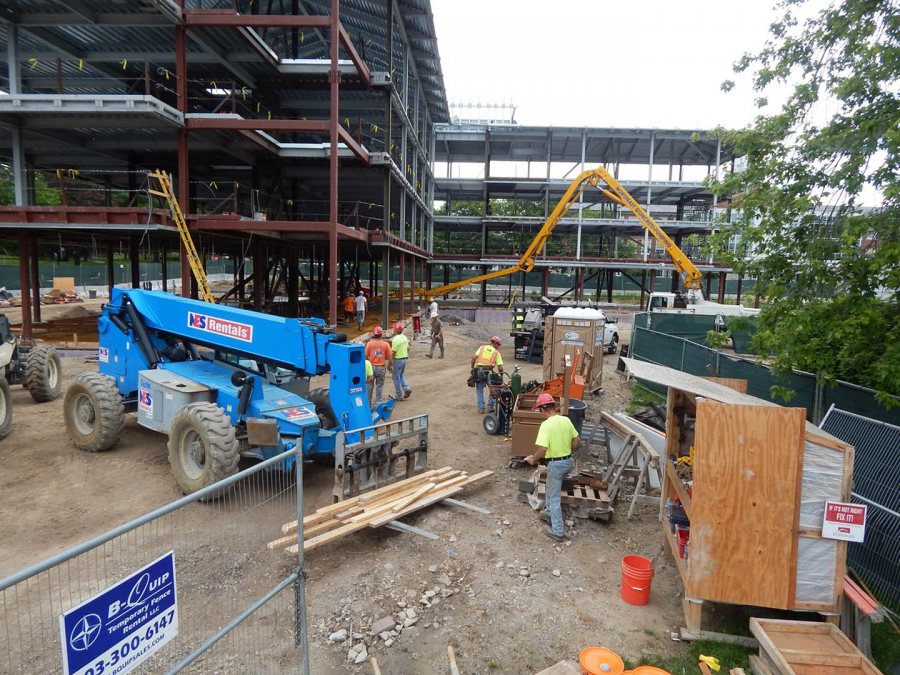 Getting to work at 65 Campus Ave. on June 12, 2015. The yellow arm is a boom for pumping in concrete for floor slabs. (Doug Hubley/Bates College)