Dozens of Bates staff, faculty, neighbors, and friends celebrated the June 19 “topping off” of twin residence halls under construction on Campus Avenue when workers bolted into place a steel beam emblazoned with signatures and well wishes of many of those in attendance.

Applause and cheers rippled through the crowd as the beam twirled toward its destination along the roofline of the building going up at 55 Campus Avenue. 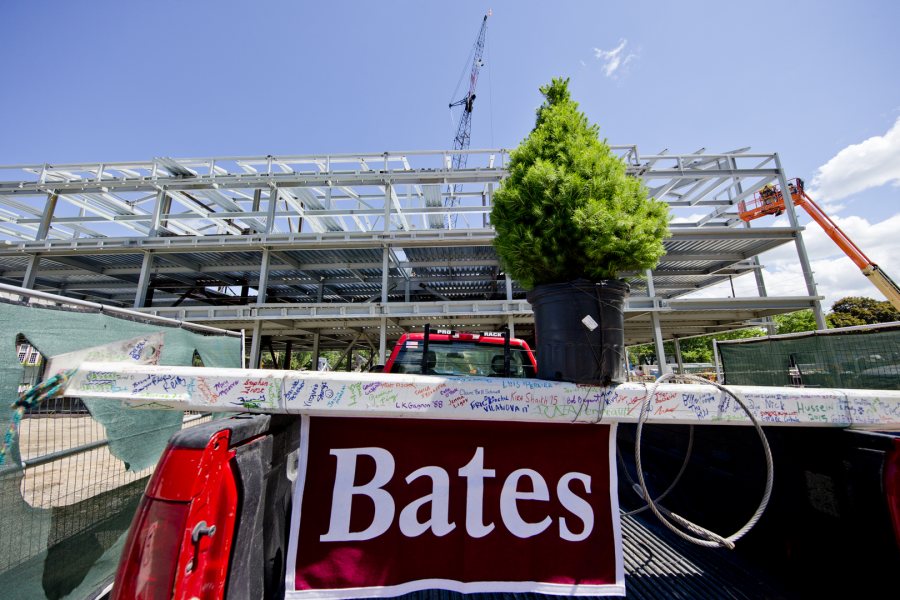 A small spruce tree was wired to the beam, a nod to the ancient Scandinavian tradition of placing a tree or leafy branch atop a new building to appease arboreal spirits that may have been displaced during construction. Beneath the beam fluttered a Bates banner and the American flag.

Located at 55 and 65 Campus Avenue, the four-story buildings are scheduled to open in August 2016. The first phase of the college’s Campus Life Project, the residence halls will occupy two full blocks and have 243 beds in total.

In addition, the halls will house the college’s Package Center and Office Services, as well as a new and expanded Bates Bookstore. Plenty of green space will surround the halls for students and the community to enjoy. The buildings will also meet a LEED-equivalent silver standard for efficiency.

“Our students living here will have the kind of integrated, residential, academic, co-curricular experience that we are all about — educating the whole person,” said President Clayton Spencer. “The addition of these beds brings breathing space, living space, and common space. It’s incredibly exciting.”

Bates is not expanding its enrollment with the addition of the new residence halls. Instead, the buildings will give the campus the extra living space needed to refurbish older dormitories, some overcrowded, such as Smith Hall.

More than 90 percent of Bates’ 1,800 students live in college-owned housing, including all first-year students.

“A symbol of the momentum and the energy that Clayton and her leadership team have brought to campus.”

Spencer thanked Consigli Construction, the lead contractor, for working through a brutal winter to keep the project on time and on budget.

“Thanks to [Consigli and Ann Beha] these buildings will look as though they’ve always been here,” Spencer said. “It’s exciting to see this coming to life in front of us. As with anything in an institution and project this large, it’s always a collective effort.”

Overseeing the project for the college are Chris Streifel, project manager, and Pam Wichroski, director of capital planning and construction.

Trustee Steve Fuller ’82, P’13 attended the topping off ceremony and told attendees that the project epitomizes the forward-looking ambitions that college leaders have for Bates.

“These buildings will be both comfortable for our students and energy efficient for the campus,” Fuller said. “This Campus Life Project is a symbol of the momentum and the energy that Clayton and her leadership team have brought to campus over the last couple of years.”