Slideshow: 26 student moments from Orientation and AESOP to Convocation, classes, and sports

Last week we brought you all the stories, in text, images, and video, about the Class of 2019’s arrival on Aug. 31.

This week offers a look at all that’s happened since, right up through the first day of classes, as the first-years got their footing and started to make some tracks.

After moving in the day before, the Class of 2019 began its Bates experience with what brought them here: academics.

A new feature of Orientation, all new students had a class session right off the bat with their first-year seminar professors. 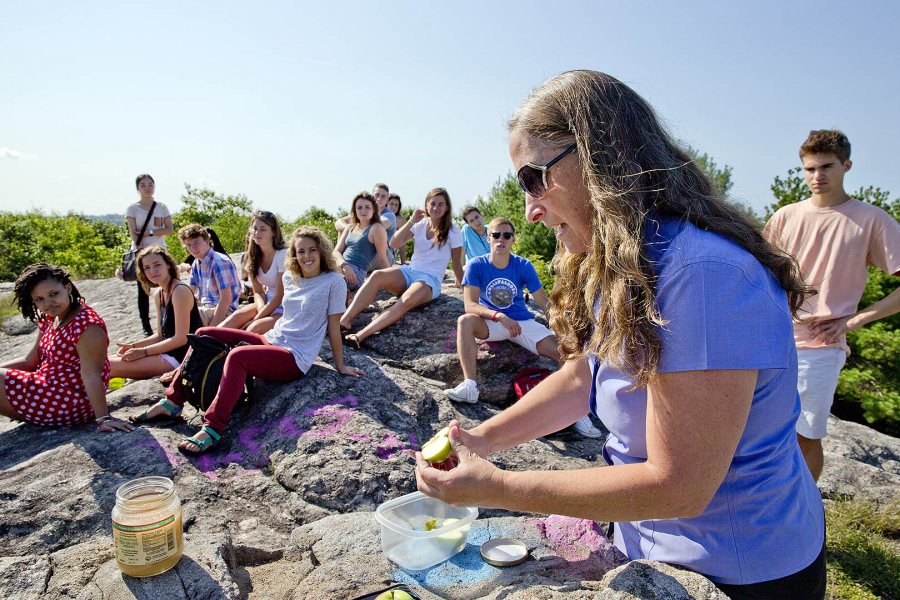 Here, atop the campus hill known as Mount David, Associate Professor of Religious Studies Cynthia Baker slices an apple under the watchful eyes of students in her first-year seminar, “The Nature of Spirituality.”

Baker then invited them to dip the fruit into honey as an expression of hope for a sweet school year, a ritual inspired by a Jewish new year tradition. After apples and honey, the group discussed the Ralph Waldo Emerson essay “Nature,” in which Emerson wrote:

Not the sun or the summer alone, but every hour and season yields its tribute of delight; for every hour and change corresponds to and authorizes a different state of the mind, from breathless noon to grimmest midnight.

After morning classes, it was time to play. In a game of ultimate organized by upperclass leaders known as OWLs (Orientation Week Leaders), John Neufeld ’17 (right) of Doylestown, Pa., and Edward James ’19 of Scarborough, Maine, contest a pass during a game on the grass field across from Smith Hall. 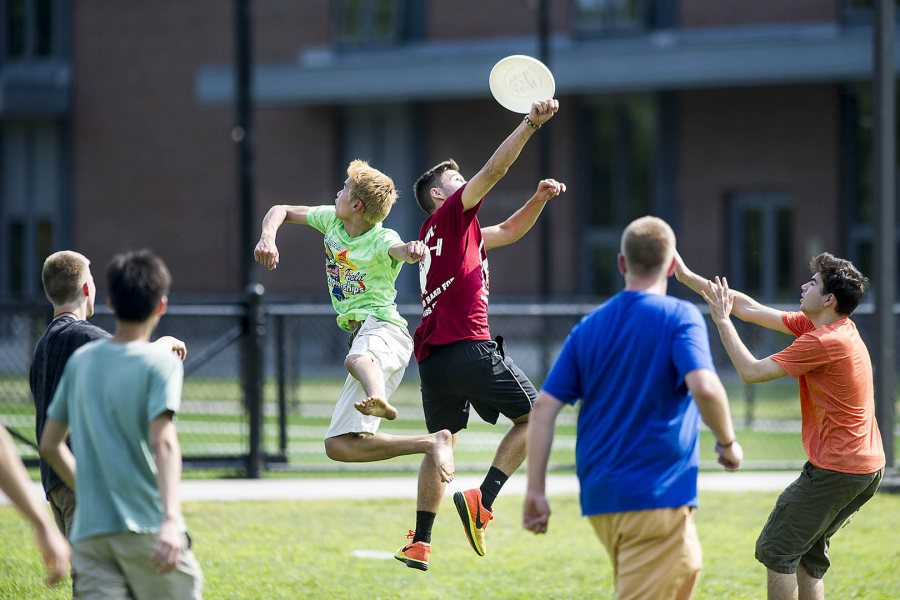 Following a presentation to all first-years on alcohol and campus life, the college’s Junior Advisors — trained upperclass students who live among and guide small groups of first-year students — led breakout sessions with their charges. 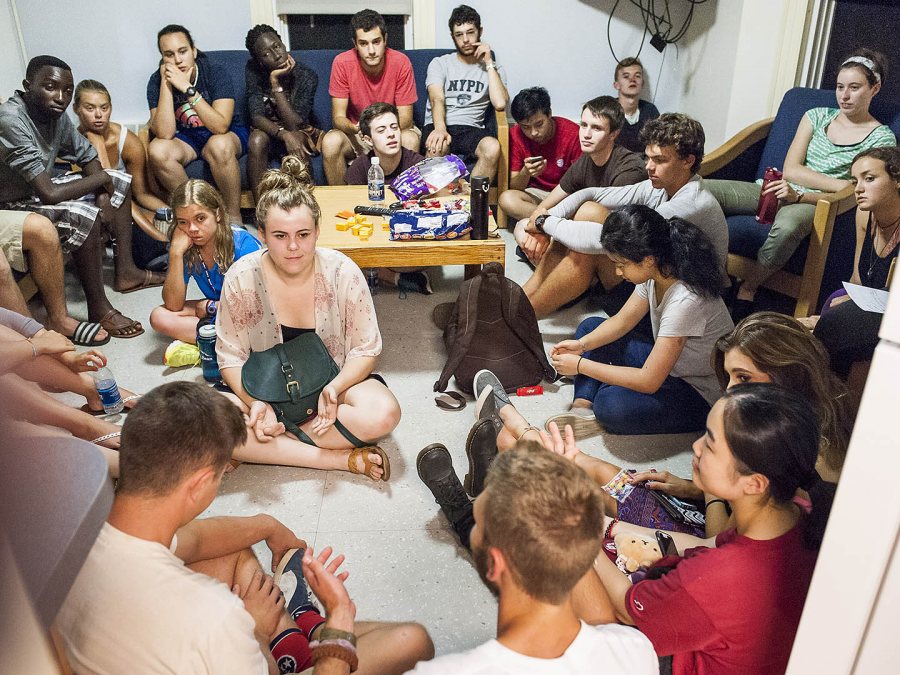 The two students are among several dozen first-year students for whom Trauceniek is a Student Support Advisor.

The SSAs will be a single point of contact in the Student Affairs office throughout a student’s four years, providing continuity, personal support, and supplemental academic advising. 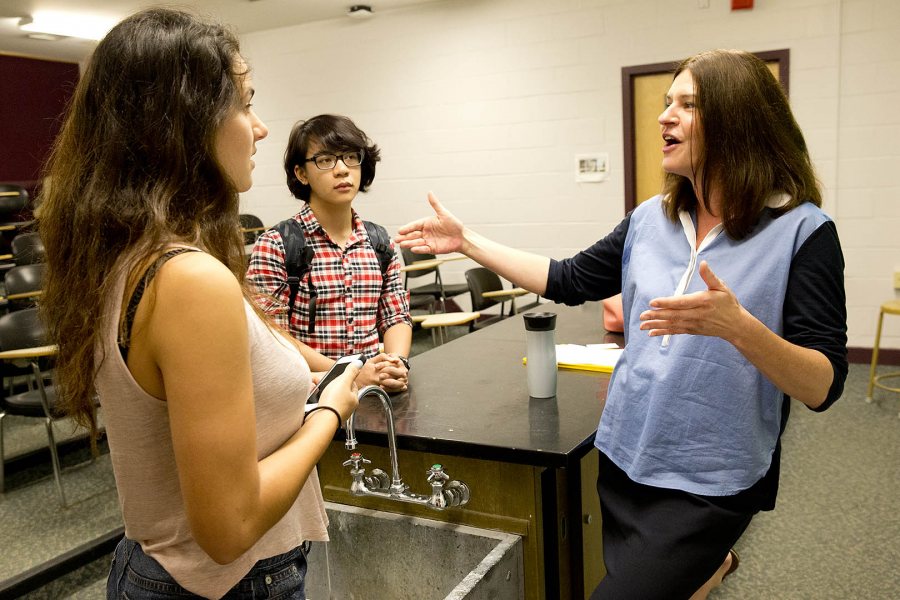 Professor of Psychology Todd Kahan (right) speaks with first-year students about his department’s offerings during an academic fair.

A recent recipient of the prestigious James McKeen Cattell Fund Fellowship, granted to only two to four researchers annually, most affiliated with major research universities, Kahan studies how people process visual information and how cultural differences affect those processes.

Let’s put a fine point on this: a world-class researcher, department chair, meeting personally with first-year students the week before classes start. 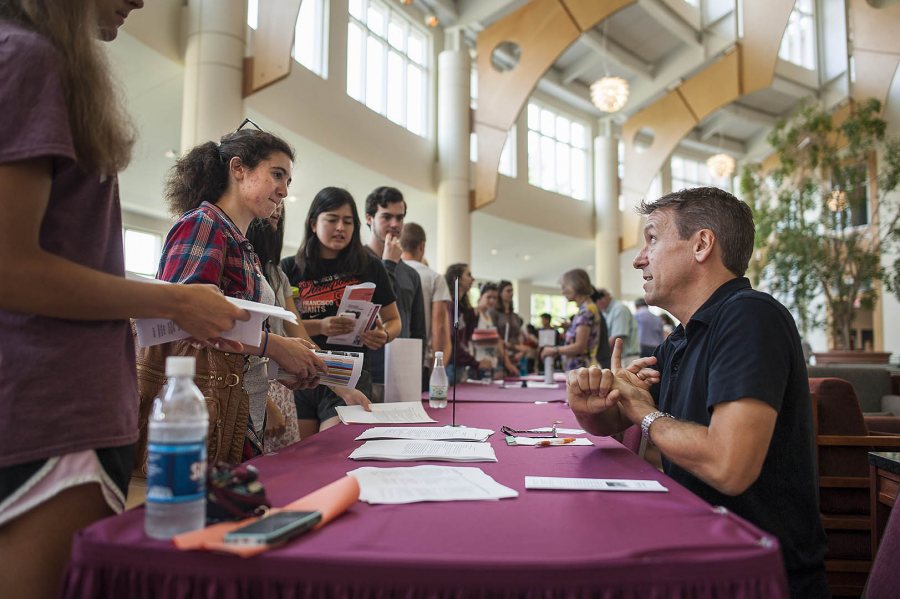 While the first-years were meeting new friends, some old friends were seeing each other after a long time apart.

Here, Alex Eliopoulos ’16 (left) of Akron, Ohio, and Julia Rice ’16 of Providence, R.I., greet each other in front of Commons. They last saw each other in December 2014, after which each spent a semester abroad, Eliopoulos in Italy, Rice in Spain.

“It’s great to be back,” said Eliopoulos. “It’s so welcoming. It feels just like home.” 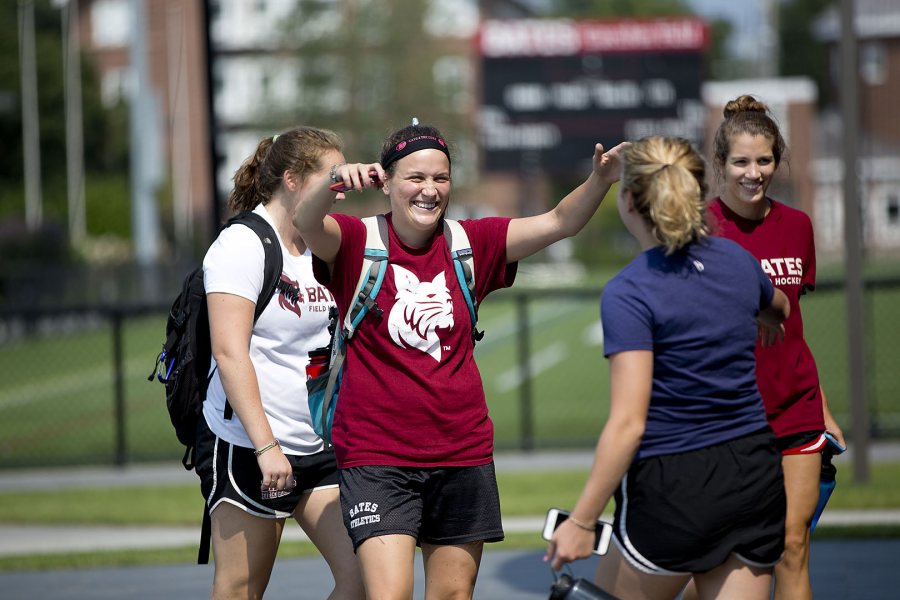 First-year students reach for pastries at Grant’s Bakery, which has been satisfying the campus sweet tooth since 1956.

Led by OWLs, the students were touring local bakeries, and subsequent stops included the Cupcakery on Lisbon Street and the Italian Bakery on Bartlett Street. 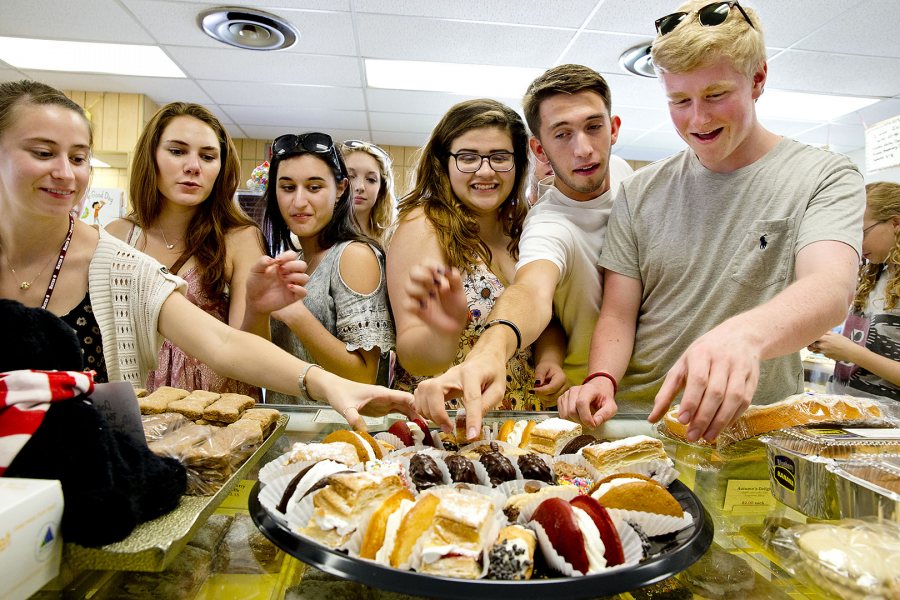 Having gotten grounded in Bates academics and residence life, the first-years were ready to head off campus for some fun.

Here, the first-years gather at the Keigwin Amphitheater to meet their AESOP (Annual Entering Student Outdoor Program) trip leaders, who give a big Bates hello, en masse, to the first-years. 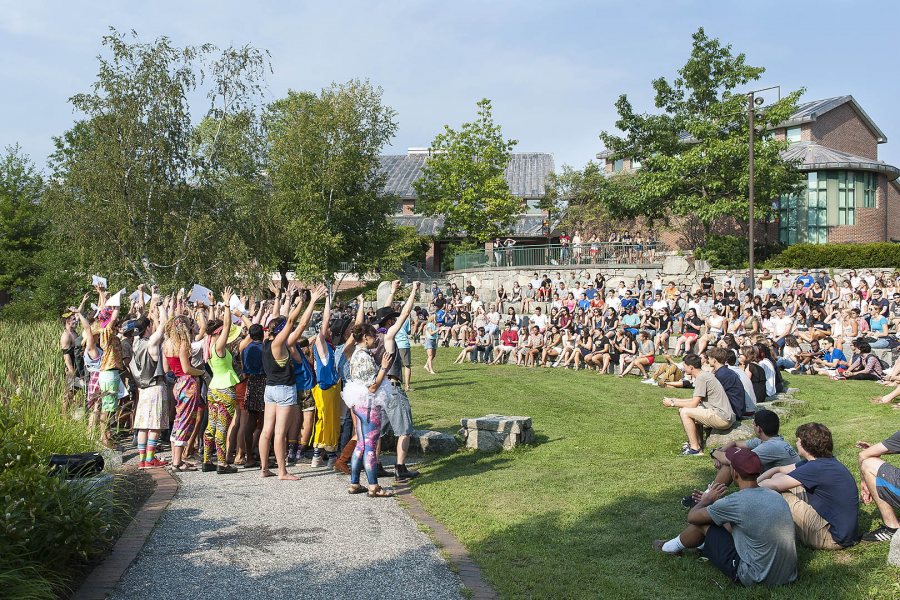 On Wednesday morning, the various AESOP trips packed up and headed out on their four-day excursions.

Connor Gray ’18 of Whitefish, Mont., co-leader a trip to trip to Maine’s Mooselookmeguntic Lake and the western foothills, takes his materials from AESOP coordinators Natalie Silver ’16 of Bennington, Vt., and Sasha Lennon ’16 of Cape Elizabeth, Maine, who found this unconventional but apparently comfortable way to hand out materials to the students leaders of this year’s 54 trips. 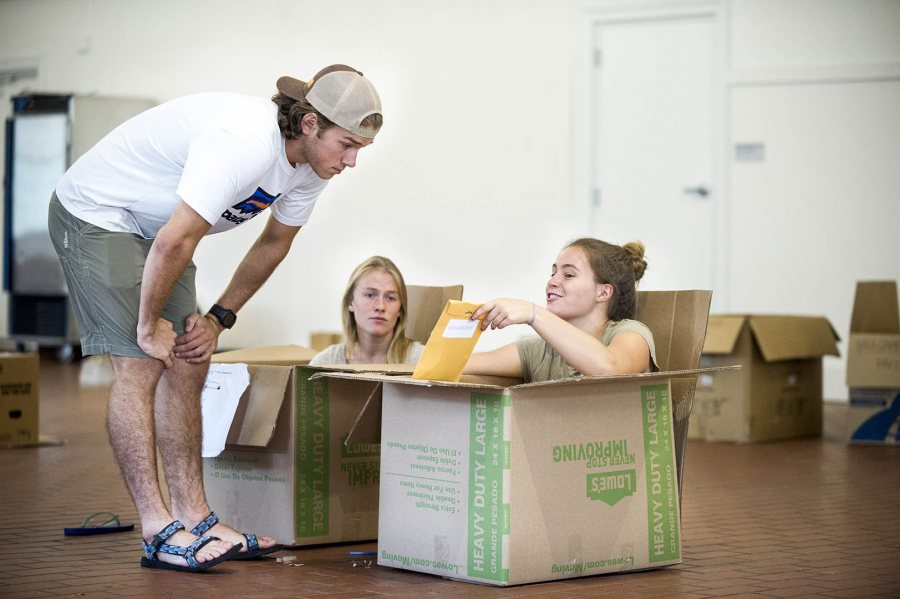 While the rest of the first-year students took part in AESOP trips, first-year varsity athletes joined their teammates and got down to business on campus. 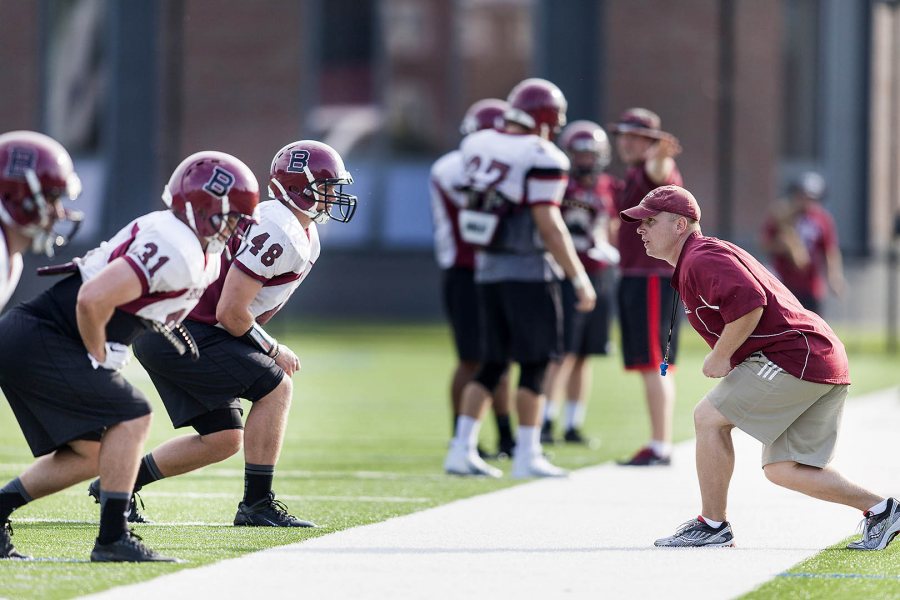 Morgan Lewis ’19 of Nederland, Colo., cleans the windows of the swimming pool at the YWCA near campus during his AESOP service trip in Lewiston, led by Bridget Feldmann ’16 of Potomac, Md., and Will Bryer ’16 of Richboro, Pa.

Students spent part of this morning doing cleanup, weeding, and painting, along with window washing, at the Y on East Avenue in Lewiston. 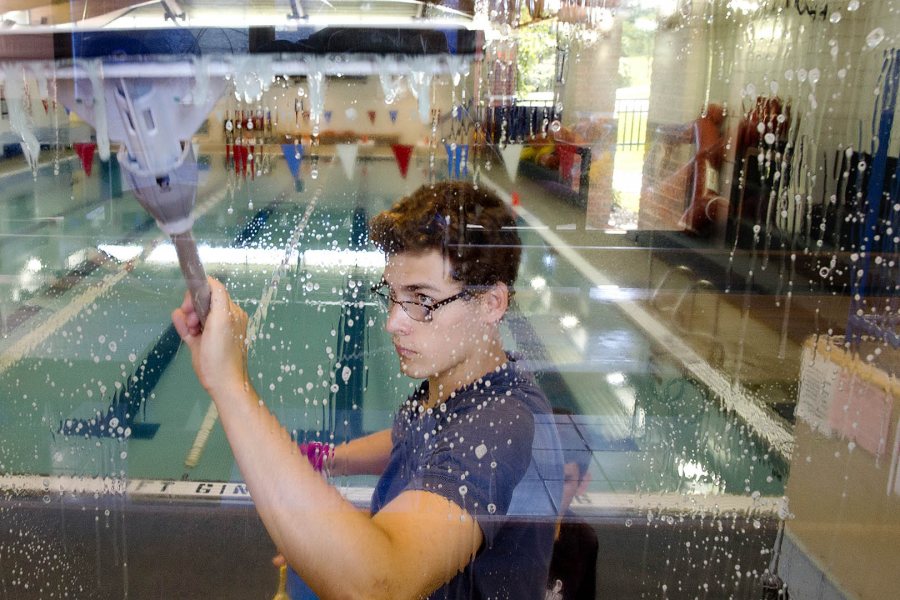 Two of this year’s AESOP trips headed to Mount Blue State Park, and this long-exposure photo shows students playing light-up frisbee while others hang out around the campfire.

Capturing the stars depends on a very dark sky, and in Maine still has some of the darkest night skies in the country. You don’t have to go far to find them: Mount Blue is just over an hour from campus. 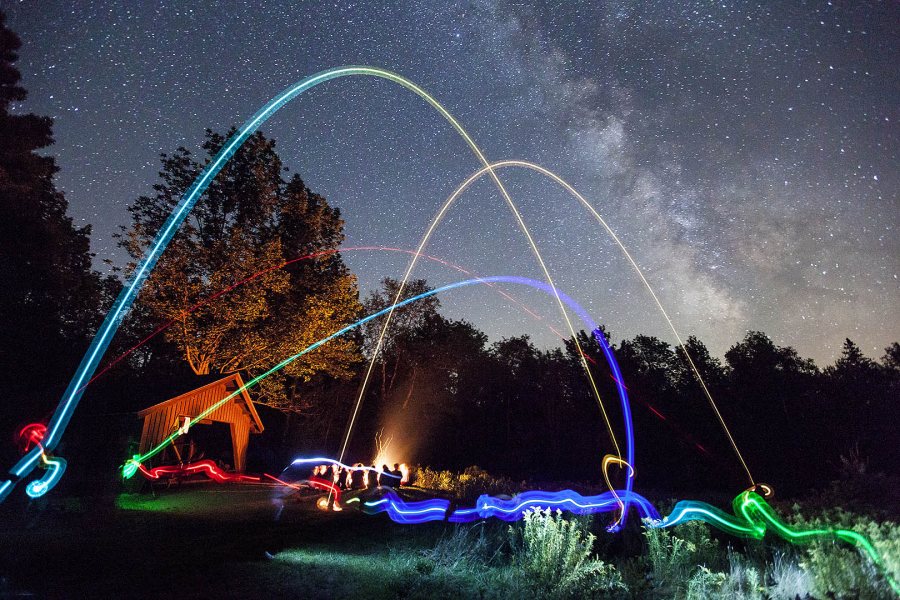 Dabbed with paint as a way to create some art ‘n’ AESOP identity, trip co-leader Calvin Reedy ’17 of Wilton, Conn., paints co-leader Erin Montanez ’16 of Fairfield, Conn., after they arrive at the famed artists’ colony of Monhegan Island.

During their day on the island, the group visited art galleries and studios, hiked the island, and created their own art.

“I love the openness of the water and the stillness of the coast,” said Montanez, an art and visual culture major. “It’s spiritually moving.” 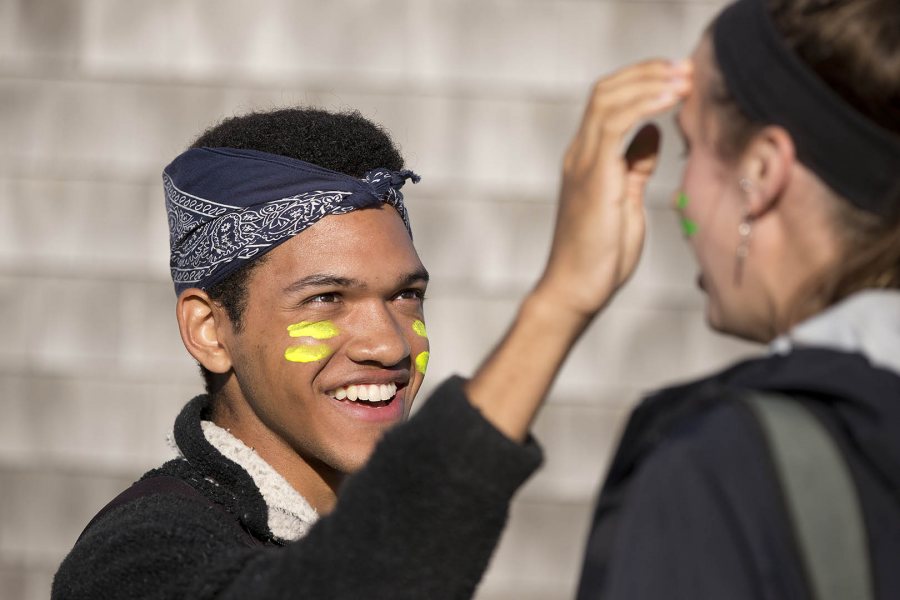 Paloma Baille ’19 of Los Angeles sits and sketches upon a high spot on Monhegan Island. 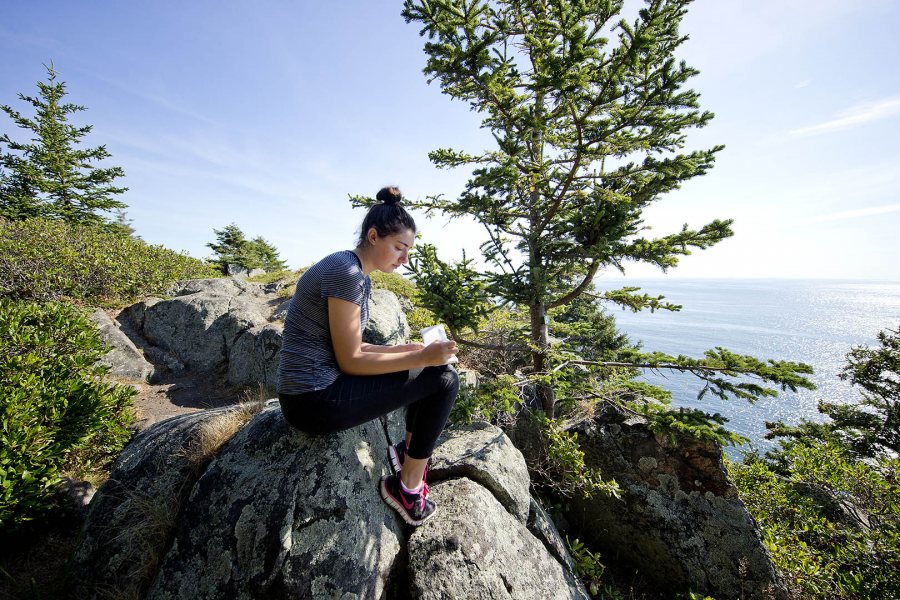 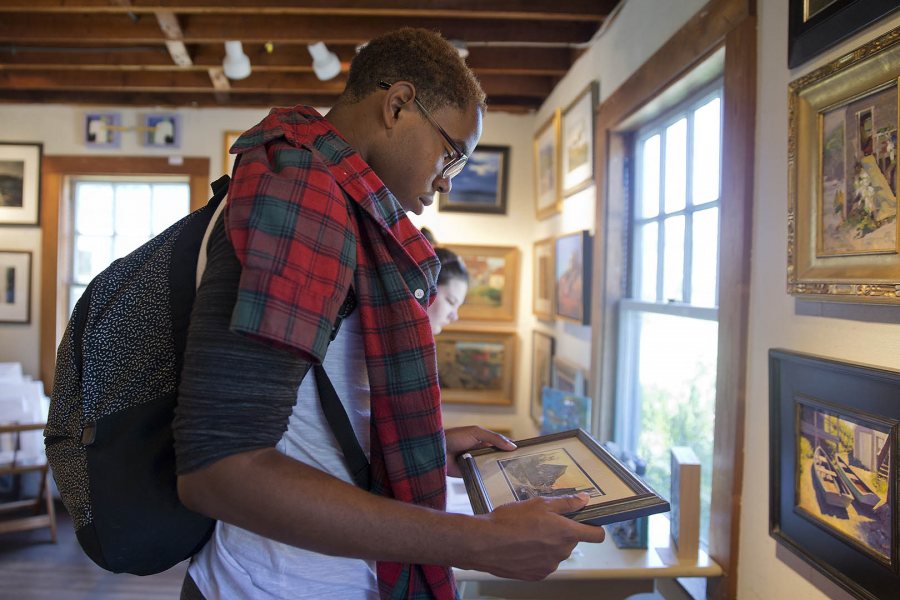 Back with the Mount Blue crew, AESOP co-leader Ryan Chinn ’18 (left) of Wilmington, Del., and William Sanders ’19 of Arlington, Mass., sit on a boulder on Tumbledown Pond, an alpine pond just below the summit of Tumbledown Mountain. 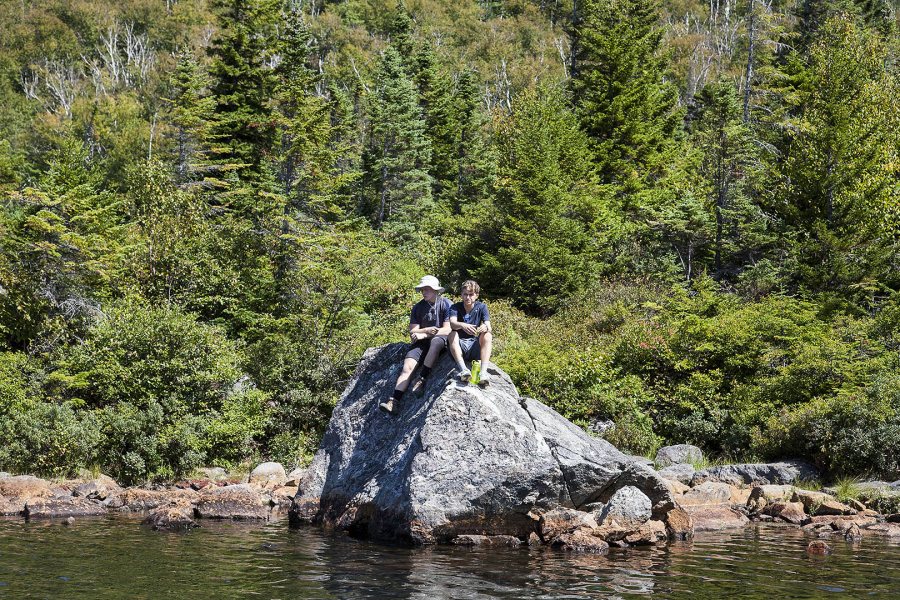 Bethel Kifle ’14 and Deepsing Syangtan ’18 of Kathmandu, Nepal, arrive at the corner of Lisbon and Main streets as they give first-year students a tour of downtown Lewiston-Auburn.

The first-year tours, organized by the Harward Center for Community Partnerships, were led by students and staff who have done significant volunteer work in the local community.

Kifle works with the Harward Center and Student Affairs as an AmeriCorps VISTA Civic Leadership Post-Baccalaureate Fellow, and Syangtan is an Orientation Week Leader. 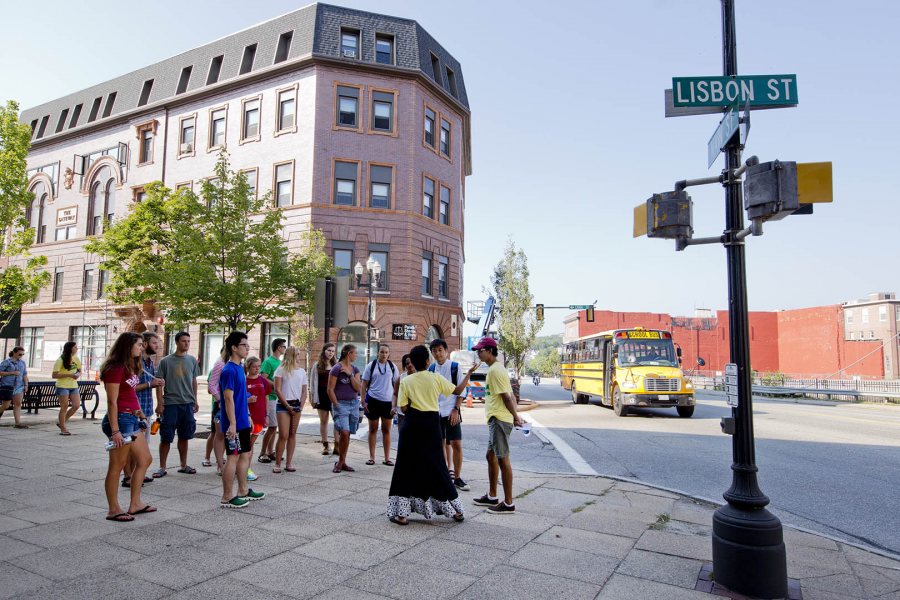 At brunch in Commons, faculty, staff, and JAs lead members of the Class of 2019 in a discussion of their Common Reading, Danielle Allen’s Our Declaration. 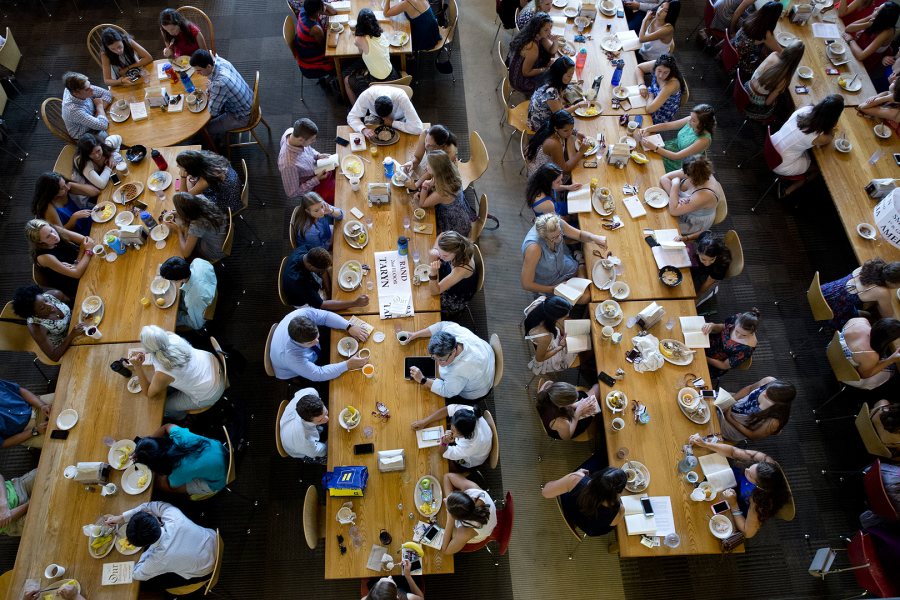 After brunch, the 518 members of the Class of 2019 pose for the traditional incoming class photo. Behind them are three class banners. The new class will choose its banner design later in September. 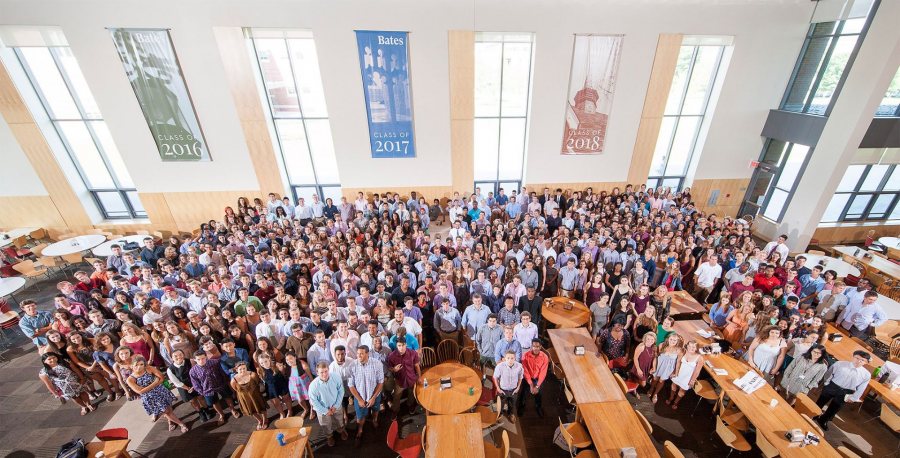 Dressed smartly for the occasion, the Class of 2019 lines up on Alumni Walk before processing to the Historic Quad for Convocation. 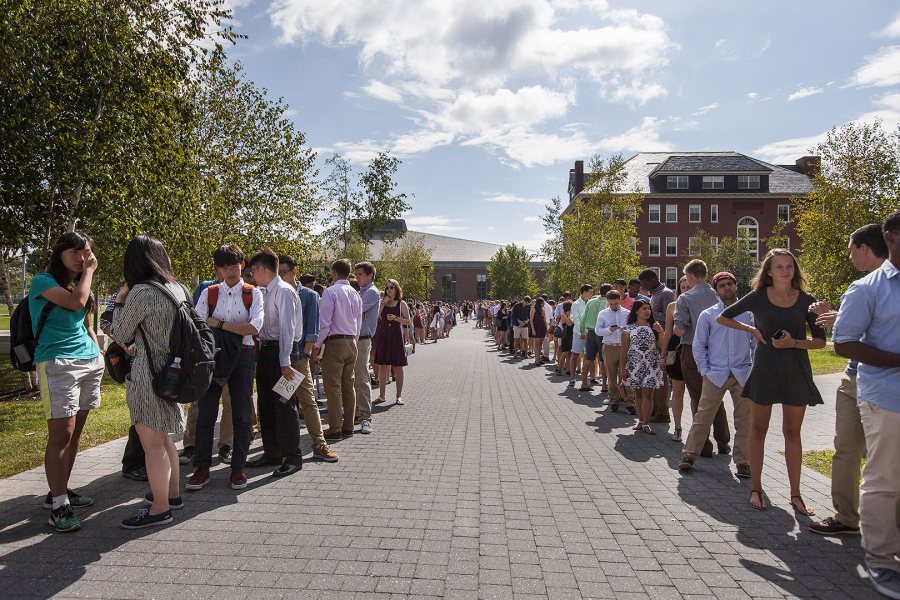 Michael Murray, the Phillips Professor of Economics, prepares to lead the academic procession to Convocation as the new mace bearer, an honor accorded the senior member of the Bates faculty.

“As we stepped off, my first thought was that Sawyer did such a wonderful job,” Murray said. “He is tall and lean, and has such a noble, austere bearing. I’ve said that in giving me the mace they’re turned it over to the leprechaun.” 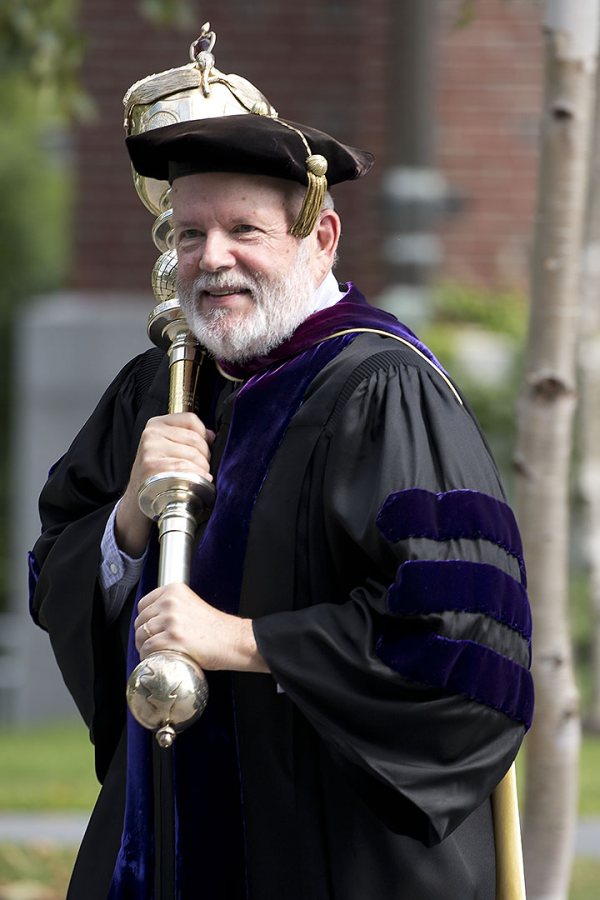 When Murray arrived at Bates in 1986 as the Phillips Professor, and joined a like-minded group of professors who rebelled against the tradition. “We said that we were not going to pay attention to that rule.” The rebellion succeeded, and today the college bylaws no longer require marching by seniority.

And now, Murray himself is the leader of the academic procession. “The irony of having a mace bearer who undermined one of the key parts of this academic ritual is not lost on me!”

President Spencer and Convocation speaker Danielle Allen, author of Our Declaration: A Reading of the Declaration of Independence in Defense of Equality, watch faculty arrive for Convocation in front of Coram Library.

In her greeting, Spencer spoke about the relationship between the words we use and the community we wish to create.

“In order to make change in the world — or to shape this campus community based on a set of principles and values that we forge together and consciously embrace — words are just the starting point. They must be backed up with actions, and these actions eventually need to become habits.”

Allen told the audience that the Declaration of Independence is fundamentally “about people diagnosing what afflicts them, prescribing remedies, and justifying those remedies.”

And because a liberal arts education emphasizes substantive discussion, reasoning, and argument, it gives students the ability to justify their paths in life, to come “into their full as agents, actors in the world, choosers of their own courses.” 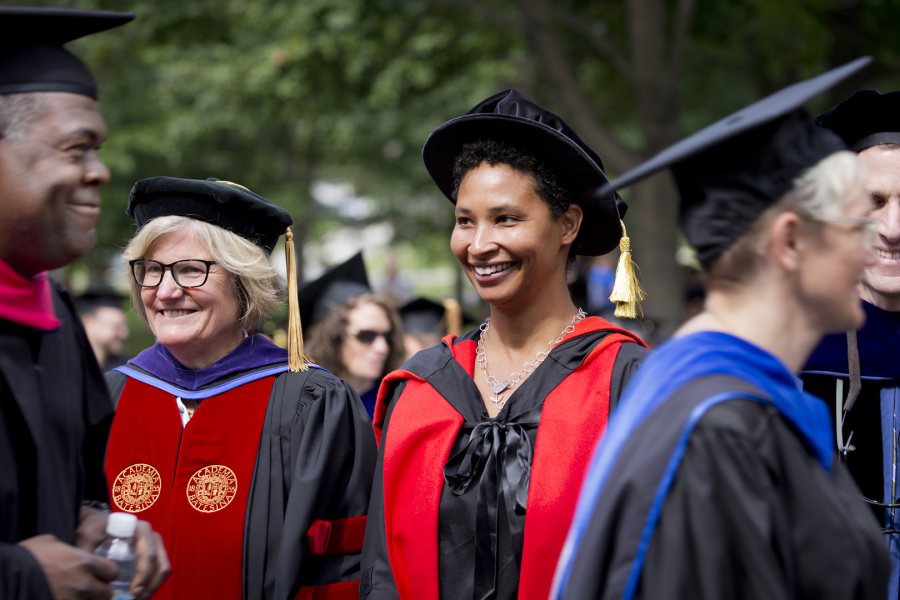 During the recessional, Norberto Diaz ’16 of Carson, Calif., who is president of the Bates Student Government, talks with, from left, Danielle Allen, multifaith chaplain Brittany Longsdorf and President Spencer.

One of the Convocation speakers, Diaz told the new students that “Bates is truly unlike any other community you have been part of.”

He added, “Bates is in a time where the voice of the students can have a tremendous impact. I implore you to join, to commit, and to lead. Your voice — our voice — is one with tremendous weight, and you have the ability to make Bates even better for those who come after you.” 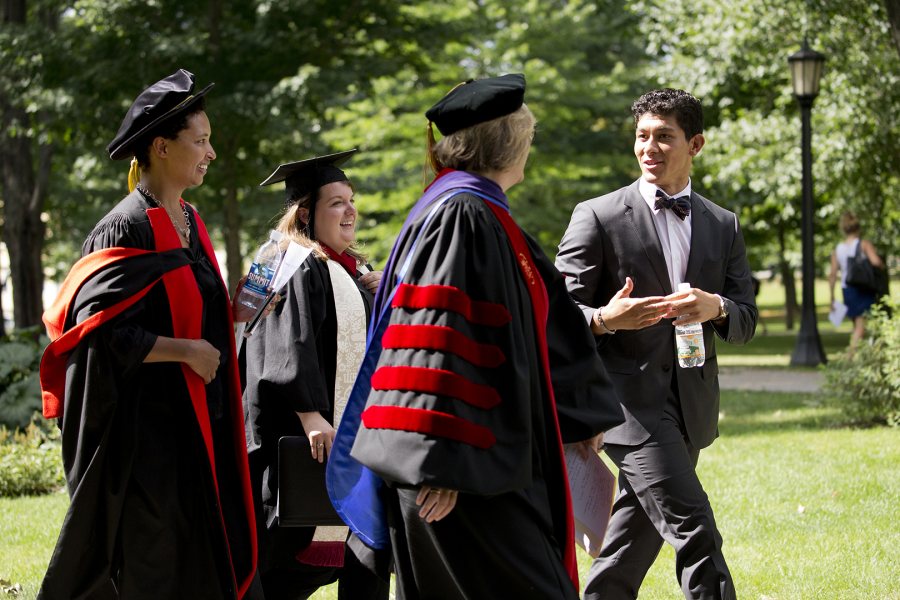 Faculty, staff, and students take turns pouring cups of water, drawn from Lake Andrews, onto the roots of a new tree on the Historic Quad.

The annual ceremony, held after Convocation and led by multifaith chaplain Brittany Longsdorf, pays tribute to Bates faculty and staff who have died during the past year. 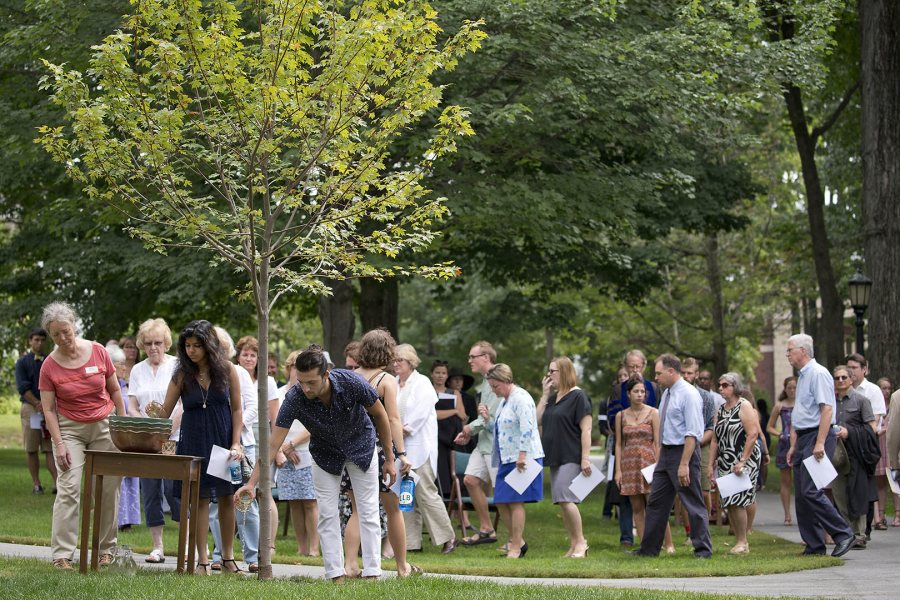 Involving extensive fieldwork, the course is “Dendrology and the Natural History of Trees,” and Huggett will teach his students about the anatomy, functioning, taxonomy, biology, and uses of trees.

Huggett and his students plan to create a website of the various tree species on the Bates campus. 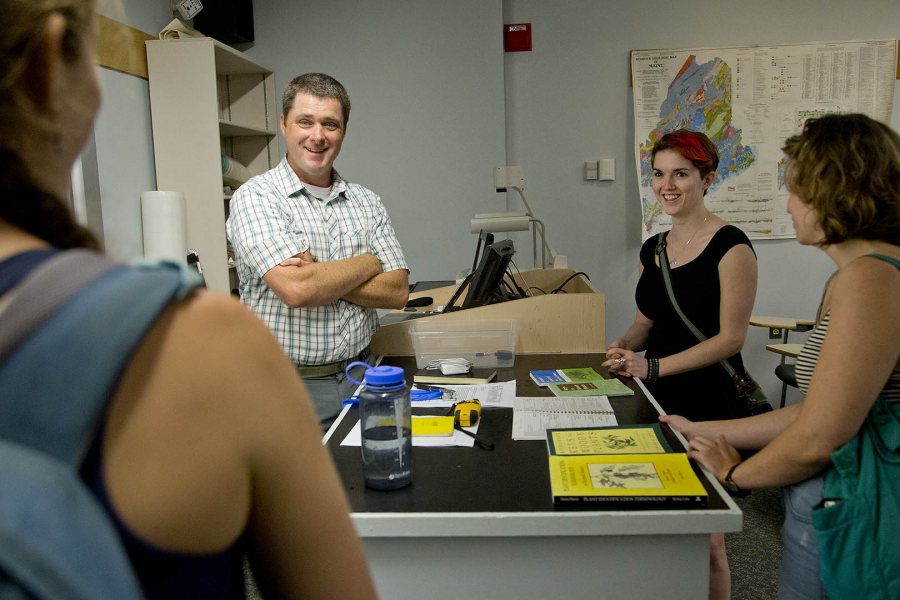 Proud and hopeful, members of the field hockey team hold hands prior to introductions for their first game, vs. Husson University.

At game’s end, the two teams were still unbeaten and untied. How? With Bates up 4-0, the game was suspended due to lightning, to be resumed another time.

And that’s how we see the new Bates year. No results yet, but reasons to feel confident! 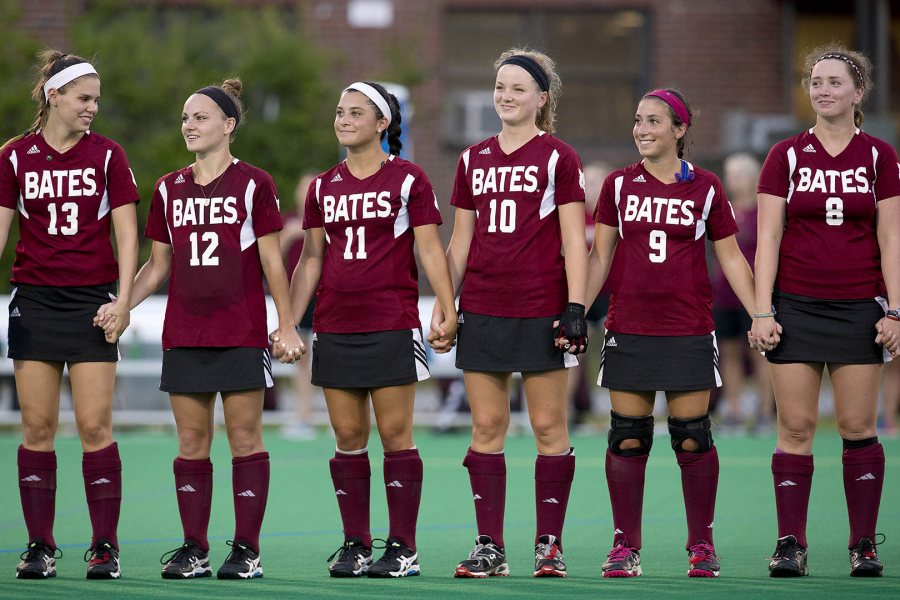