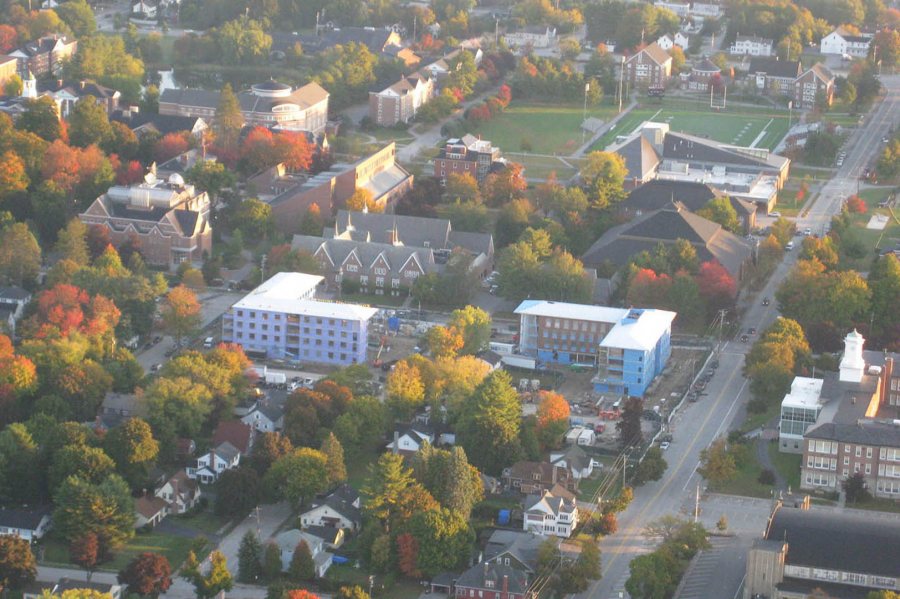 An action-packed hour spent the other day with Chris Streifel, project manager for Facility Services and Bates’ point person on the Campus Life residential project, afforded some insight into the multifaceted work that Bates project managers do. 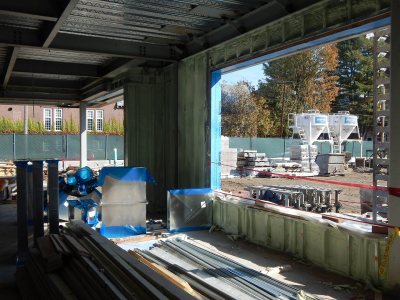 And, more important and more intriguing, how Streifel and his Facility Services peers represent Bates’ interests when complex decisions must be made in the field. 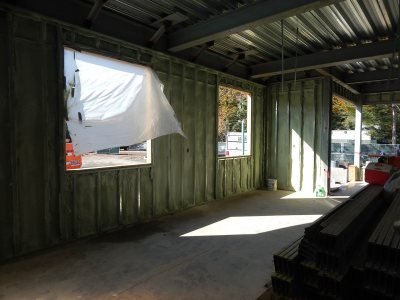 Streifel met CCU on Bardwell Street around noon Tuesday in front of the portable office occupied by staff from Consigli Construction, which manages the Campus Life Project work for Bates.

With the Bates Board of Trustees scheduled to meet on campus later in the week, Streifel gave us a preview of the tour he was planning for that august group.

We began at 55 Campus Ave. — Campus Construction Update’s first visit inside the building, which is the virtual twin of 65 Campus and, by design, is a few weeks behind its sibling in the construction process. While the ground floor of 55 is still an undivided expense of exposed and unfinished building innards, Streifel walked us through spaces that in about a year will be buzzing with the electricity of student life.

Facing north toward Campus Avenue and east toward 65 Campus, an L-shaped lounge area will sport comfy furniture, a natural gas fireplace and a “laptop bar” facing out through a glass wall. A kitchen island, whose future space is currently occupied by an island of stockpiled metal wall studs, and a game room will occupy the rear of building, adjacent to a wing of dorm rooms. 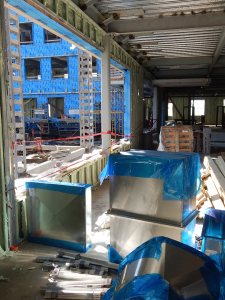 Another view of the entrance lounge at 55 Campus Ave. A fireplace will be installed just past the large window opening. (Doug Hubley/Bates College)

Back outdoors, looking more (Streifel) or less (CCU) like we belonged there in our hard hats and reflective-chartreuse visibility vests, required on the work sites, we watched bricklayers at work on a long eastern wall of No. 55. That’s the third wall on that building, out of six, that Maine Masonry has gotten to, compared with No. 65, where last week masons began work on the next-to-last wall, facing Central Avenue.

We took a quick look at the wall-treatment mockup in front of 55, where Streifel pointed out an instance of how the mockup had served its purpose: One masonry product on the the mockup, a concrete paneling called Taktl, had become bleached out when a mason practice-washed the bricks above it. Lesson: Wash the bricks before the Taktl goes up.

Plenty of bricks have been washed over at 65 Campus, and there’s plenty of Taktl in place, a textured material mounted on metal frames and colored the charcoal gray that has become standard in the Bates architectural palette in recent years.

In other realms of exterior progress, many of the window units that arrived during the first week of October have been installed, looking natty with Taktl accents underneath. And workers for Industrial Roofing have gotten most of the several layers of the roofing sandwich in place — different types of board, insulation, and water and air barriers — and will soon start topping it off with asphalt shingles. 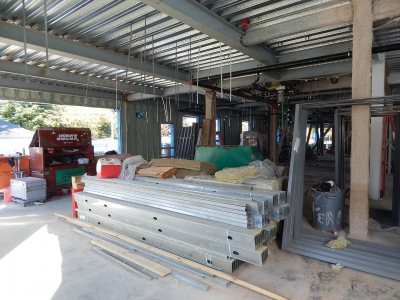 The stack of metal wall studs marks the approximate location of a kitchen island in a student lounge at 55 Campus Ave. (Doug Hubley/Bates College)

One gets from one Campus Avenue construction site to the other by crossing Franklin Street. On Tuesday, the street was graded dirt, with new pavement coming in the near future. “We did so much work underground there, and it was in poor condition to begin with,” Streifel said, that closing the street for a few days to repave it was a no-brainer.

Moreover, as part of the Campus Life Project plan, the stretch of Franklin closest to Campus Avenue was made narrower at the same time. “We eliminated the parking lanes on each side, so it’s now just the width of two traffic lanes.”

Because No. 65 will house the College Store and Office Services, both of which will be open to the public, the building’s ground floor will differ from No. 55. Through entrances on Campus Avenue and at the corner of Campus and Central, you’ll walk into a reception area connecting to the store through a portal that will be locked outside business hours. 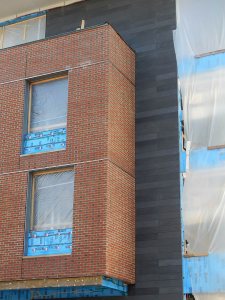 We headed upstairs, planning to check out dorm rooms, whose progress ranges from bare studs to new paint; the new subway-style wall tiles that have been finished in certain bathrooms; and a fourth-floor lounge that will have an awesome view once glass has replaced the plastic in the windows.

And then Streifel’s phone rang: He was needed to settle a question.

While Campus Construction Update roamed the fourth floor in an ecstasy of photographing subway tiles and coils of electrical cable (shiny!), Streifel met in a single dorm room with a city electrical inspector and with representatives from Consigli, project designer Ann Beha Architects, and the project’s electrical subcontractor, Lewiston-based DeBlois Electric.

The question involved the placement of the four electrical outlets that will equip each of the single dorm rooms.

While that placement had recently been finalized, following a decision about the standard furniture arrangement in the singles, some outlets had been installed prior to that determination and not conforming to it. Hence the fourth-floor confab. 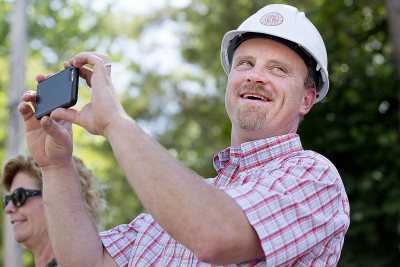 In the end, it was an easy resolution: One outlet per room would be moved.

“The architect is the authority on this,” Streifel said, but “if we have a specific idea for these outlets that may be different from what they’d envisioned, then they’re usually going to defer to us, provided that we’re not violating any codes or any design issues that they see as important.” 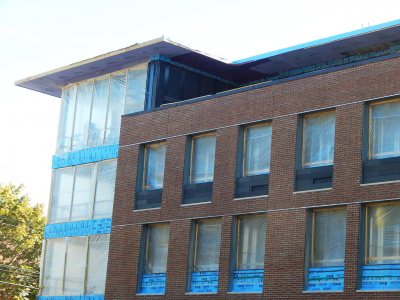 He continued, “In this case we inserted ourselves into the conversation to make sure that we got what we needed. They’re trying to build the beautiful, functional buildings that Bates wants. And so I’m representing Bates in the field, and conveying our desires and intentions.

When questions arise or design changes are needed, “Everybody’s looking for Bates to approve the plans and decisions that are being made in the field.” 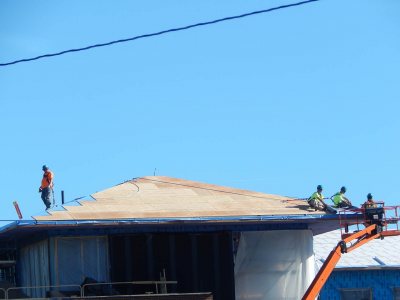 But in the real world there will be questions, and it’s the project manager’s job to address them in a way that best serves several, and sometimes conflicting, interests, from student needs to the college’s costs, from the realities of a timetable to the needs of the maintenance and custodial staff who will keep the buildings in shape.

“You have to weigh all of those,” he says. “In this case, it was just trying to figure out how to give the students the most flexible electrical power options” — no small thing in this wired, wired world. 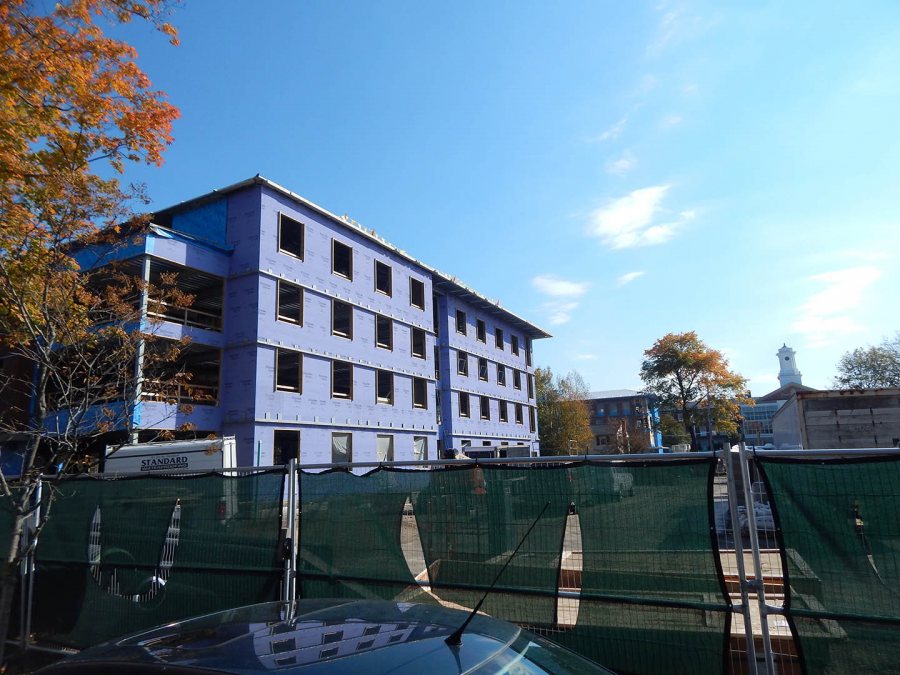