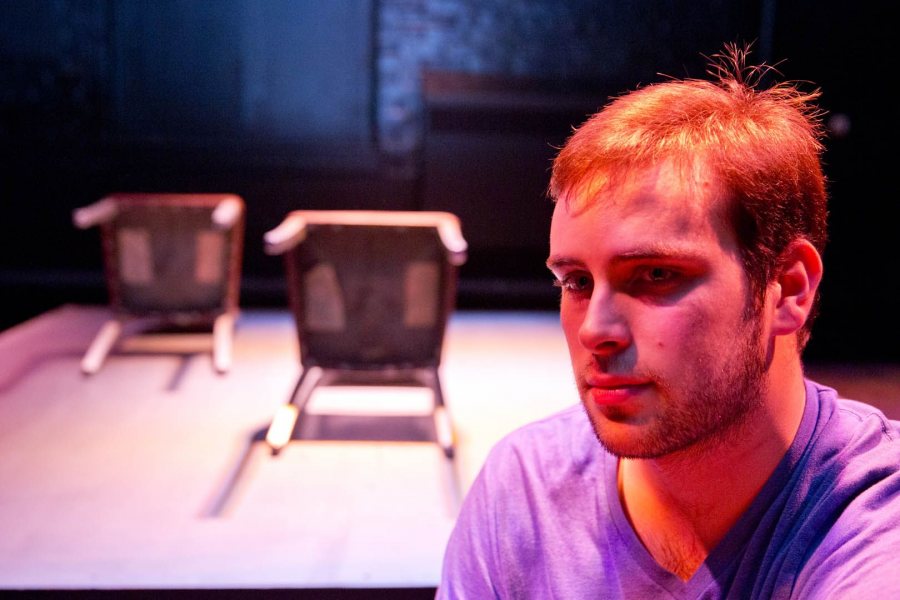 Sam Wheeler ’17 directs a stage version of “They Fly Through the Air With the Greatest of Ease.” (Phyllis Graber Jensen/Bates College)

Director Sam Wheeler ’17 brings radio storytelling to life in his stage production of Norman Corwin’s World War II-era broadcast play They Fly Through the Air With the Greatest of Ease, .

A cast of five performs the play three times this weekend in the Black Box Theater.

Here are five things to know about Wheeler and the production:

1. Corwin was one of the first playwrights to use entertainment as a medium for spotlighting serious social concerns.

Wheeler, who is a theater and sociology major from Skowhegan, Maine, learned about Corwin from his parents, Timothy Wheeler and Maura Smith, who co-direct theatrical productions at Skowhegan Area High School.

“That’s where I went to high school and they were my directors,” says their son. “They were instrumental in my pursuing this project and in my wanting to direct my own shows.”

An influential writer and director, Corwin wrote They Fly Through the Air in 1939 for his weekly CBS radio program Norman Corwin’s Words Without Music. 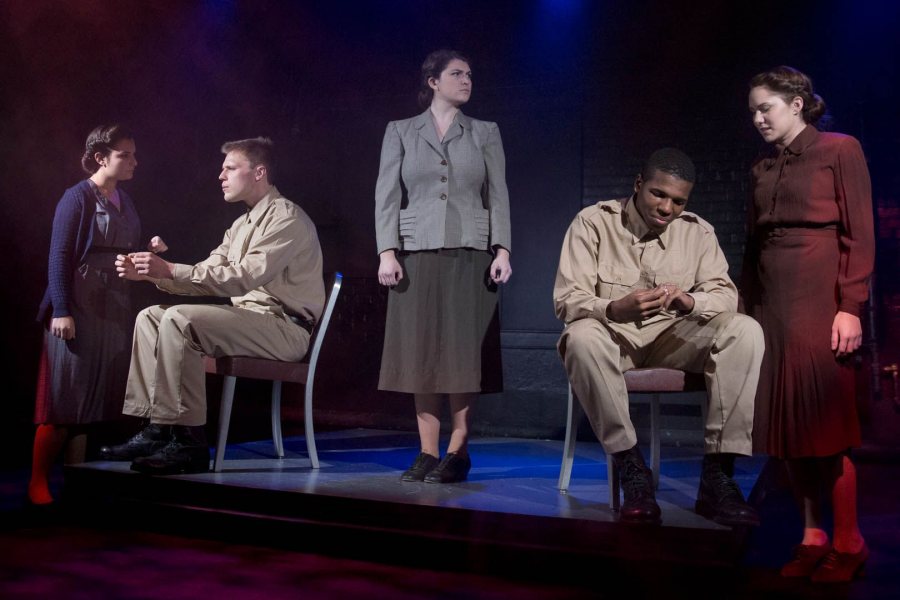 2. The story takes place in a warplane that bombs civilians during the Spanish Civil War.

The production will feature period-appropriate language and clothing — but the questions that it poses about humanity and violence are, according to Wheeler, “timeless.”

Human conflict is “this never-ending thing,” he reflects. “And I said to the cast, ‘There are three big things that never really change in this world: love, death, and people fighting.’ And all three of those are explored in this play.”

3. Rather than casting to specific roles, Wheeler created a five-member ensemble cast.

Each will play several roles, allowing for more characters. For example, the original script gave most of the dialogue to the narrator.

By dividing the narrator role among three characters, Wheeler both balanced the dialogue and enhanced the storytelling, creating, as he says, “different angles on the same story.”

4. This project is part of an independent study requirement for the theater major at Bates.

The project helps to prepare juniors to write a senior thesis, and Lecturer in Theater Corey Hinkle is Wheeler’s adviser on the project.

“What is typically done during junior year is an independent study in directing. It’s got parameters of like a 25- to 40-minute show with a small cast, a very small set. It’s really just exploring stuff that you’re interested in,” Wheeler says.

For Wheeler, “it’s exploring this one piece of literature … and seeing how it translates to a traditional play setting.” Where the original radio production sought to create images and action through the imaginations of its listeners, Wheeler’s challenge was using his imagination to put images and action on the Black Box Theater stage.

5. They Fly Through the Air runs only 30 minutes.

But, Wheeler says, that’s “long enough for people to really get involved and think about how these kinds of issues affect their everyday lives.”

The tone of his production, he says, will reflect the wide range of human emotion: “It ranges from being very heartfelt, to comedy at times, to being dark and tragic. I think everyone can relate, one way or the other.”