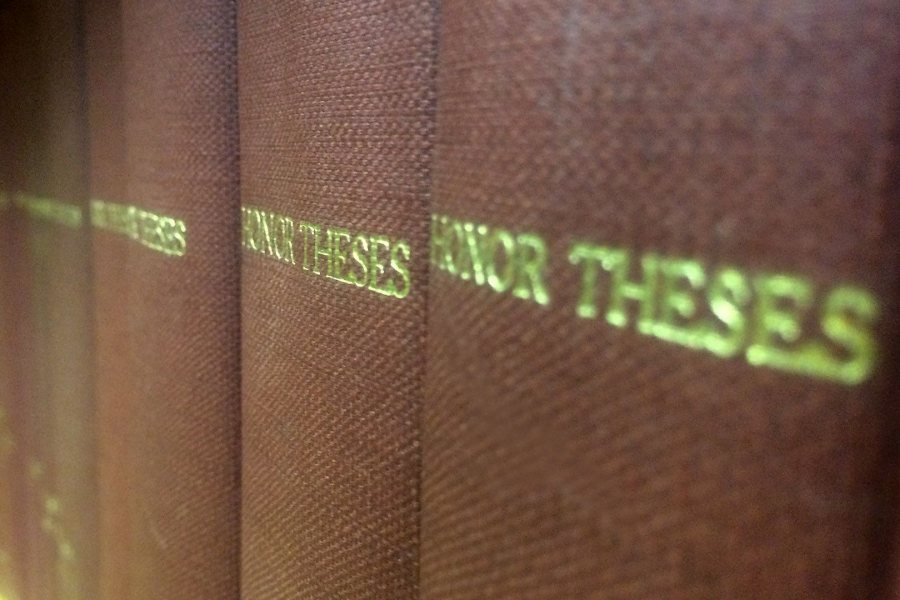 Tributes and thank-yous from generations of Bates seniors, both earnest and quirky, are inside each bound volume of honors theses in Muskie Archives and Special Collections Library.

In the spirit of Thanksgiving Week, we pored over a few hundred honors theses looking for the best thanks and tributes — that is, the most distinctive, unusual, and quirky — offered by thesis-weary seniors over the years.

While the honors program started in 1927, not until the 1970s did the custom of including dedications or acknowledgments begin to flourish. These days, the tradition is in full bloom.

Most the examples below are at 10-year intervals, meaning we didn’t look at every thesis because, well, this ain’t a senior thesis. And we chose honors theses because they’re readily available, down the street at Muskie Archives and Special Collections Library and online since 2011 on the SCARAB database.

Best Use of Self-Deprecation to Thank a Bates Professor

Jordan Becker ’15, writing a rhetoric thesis on “Contesting the Dominance of Neoliberalism: The Ideograph as a Force for Social Change,” said this about Professor of Politics Bill Corlett, who was part of his thesis defense panel:

“If I become only half the thinker, half the teacher, half the person that Bill Corlett is, it will surely be one of my greatest accomplishments.”

Best Thanks for the Start of an Academic Career

Craig Woodard ’86 wrote a biology thesis on “Partial Purification of a Type I Arylsulfatase from Drosophila melanogaster,” and thanked now-retired professor Joe Pelliccia for “for his wisdom, guidance, support, and patience. Dr. Pelliccia has taught me to be a scientist.”

Woodard earned a doctorate from Yale and has been a professor of biological sciences at Mount Holyoke College since 1995. 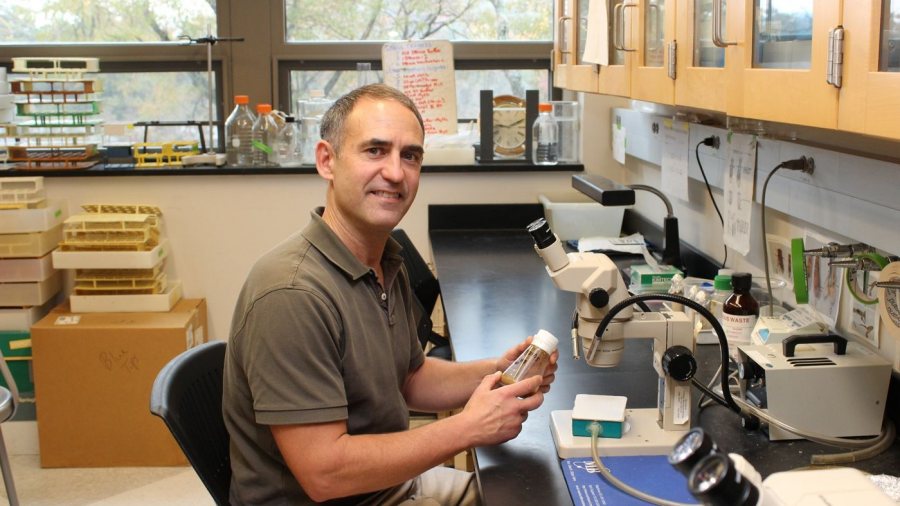 Paul Bomely ’76, writing a government thesis on “Mark-up Sessions and Congressional Decision-making: A Case Study,” dedicated his thesis to “Martha” for “her advice, her patience, and her faith, because she always understood.”

“Martha” was Martha Brown ’76, then Paul’s fiancée and a fellow government major.

Paul and Martha were married just a couple weeks after their graduation, on June 19, 1976, and will celebrate their 40th anniversary this spring. They live in Charlotte, N.C. 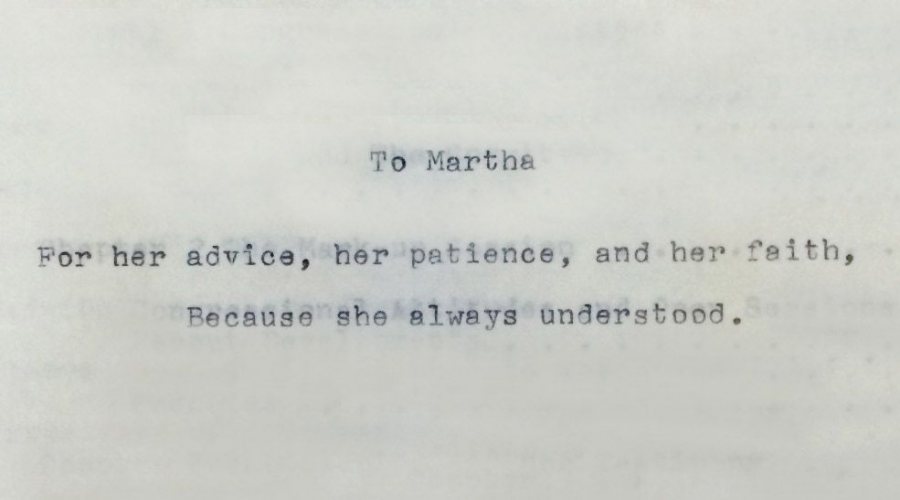 Terrance Amsler ’96, writing an English thesis on “Negotiating Public and Poetic Ground: The Poetry of Mahon, Carson, and McGuckian,” dedicated his thesis to his mom, “who, for every hour I spent typing, you knit two, purl two, making me a vest of Irish wool and familial love.”

Best Use of Humor on a Cover Page of a Thesis

Roger Thies ’55 put a cover page on his biology thesis, “A Study of the Effects of Ultraviolet Light on Bacterial Viruses” that said, “This Is Thies’s Thesis.”

He wasn’t done being inventive with his name. When he married Nancy Tanner, they joined names as Nancy and Roger TannerThies.

In thanking his adviser, rhetoric professor Stephanie Kelley-Romano, the aforementioned Jordan Becker added a footnote admitting that he was writing his acknowledgement before actually finishing the thesis and noting that it was proving to be “a wonderful source of procrastination.”

He noted the hubris of writing the acknowledgements before actually finishing, calling it “optimistic speculation that I will, in fact, complete this thesis. As of now, whether this optimism will bear fruit and prove to be validated, no one can say for sure.”

Best Thanks to a Software Program

Joshua Manson ’15 wrote a politics thesis on “‘Same Story Every Time / Being Black is Not a Crime’: Gun Regulations and Recurrent Patterns of Government Control of Black Americans in the 19th and 20th Centuries.”

He offered a thank you to the “spell-check function of Microsoft Word, without whom ‘institution’ would be misspelled differently 197 times.”

Lionel Whiston ’66, wrote a government thesis on “The Role of Party Membership in Congressional Opposition to Presidents Eisenhower and Truman in the Fields of Labor and Civil Rights.”

He wished to use “data-processing machines to examine the relation between party membership and opposition to the president. That this was not done was due to my inability to express quantitatively the relationship I sought.”

Best Description of the Great Depression

Irving Isaacson ’36 wrote an economics and sociology thesis on “Would a System of Government Ownership, Properly Administered, Provide the Necessary Flexibility in Our Price System?”

By the mid-1930s, he wrote in his thesis, the Great Depression had taken a “terrific toll — in life, in health, in security, in money, in suffering, and in want.”

Acknowledgments and dedications in senior theses were rare up through the 1950s.

Robert Blake ’55, in his thesis on “An Investigation of Paper Chromatography as a Means to Identify Plant Genotypes,” included a Lewiston business in one of the first acknowledgments, thanking Saunders Greenhouse, which used to be on Main Street in Lewiston near the Veterans Bridge, for their “kind cooperation.”

Best Thanks to a Lewiston Nonprofit

Nicholas Steverson ’15 wrote an English thesis on “’To my Virginity!’: Queerness, Silencing, and Dominicanity in Díaz’s The Brief Wondrous Life of Oscar Wao,” and thanked the team at the Lewiston nonprofit Tree Street Youth:

“To Julia, Kim, Megan, Cristal, Anwar, Ayman, Alli, Aisha, Sam, Brett, Erryl, Kelsey, Munir, Prosper, Fabi, and all the folks at Tree Street for giving me a home in Maine, for giving me a way to be proud of my work every day, for understanding that I had to do this one last weird thing before I could be there all the time.”

Paul Wason ’76, writing a biology thesis on “The Domestication and Early Dispersal of Cotton as It Relates to the Possibility of Pre-Columbian Contacts Between the New World and the Old,” thanked a legion of friends for helping with typing (lots of people were thanked for typing back then) noting that “no matter how much planning is done, there is always a rush at the end.”

Best “Thanks, But I’m All Set”

At the end of his thanks to all his friends who helped, Wason added, “Thanks, also, to others who offered to help.”

Best Mention of a Thesis Tradition in an Acknowledgment

He toasted his adviser, Mike Retelle, by saying that “the next Interface Pale Ale in a leaky Zodiak is on me.”

The “leaky Zodiak” refers to a brand of rubber boat. But “Interface Pale Ale”? That needs explanation, which Retelle provides.

“When we recover a sediment core or sediment trap from the bottom of a lake we’re researching for the first time, or if it’s the first core for a student’s geo thesis, it’s a tradition to drink the clear water above the sediment,” he explains. “That’s the sediment-water interface. Hopefully, the bottom water is fresh and cool, not rich in reduced sulfur, that is, with a rotten-egg smell.”

Retelle notes that a former honors student, Wes Farnsworth ’11, has “carried on the IPA tradition” for his doctoral thesis in Nordaustlandet, in northeastern Svalbard. 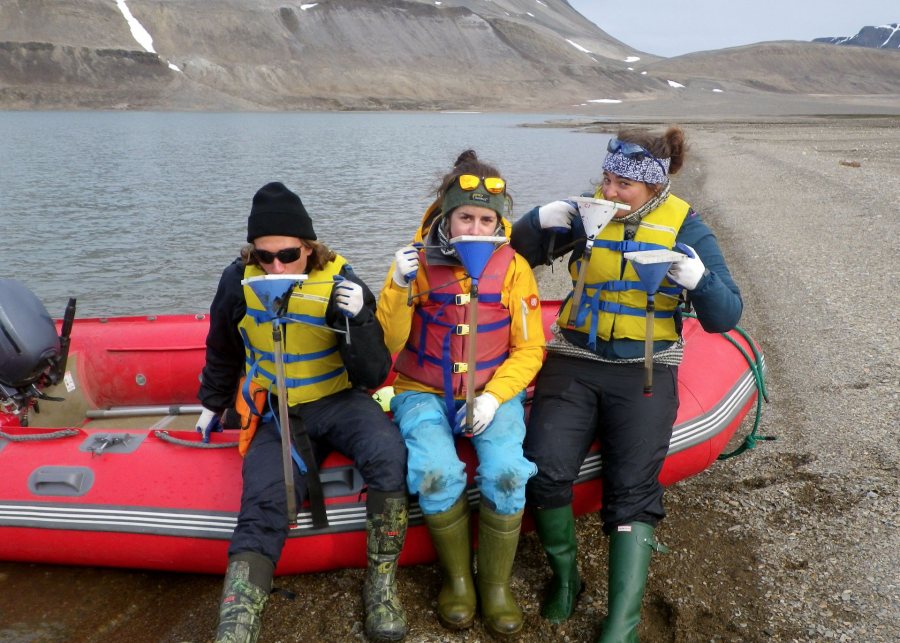 Best Acknowledgment for Willing to Be Cold

Robert Pladek ’76 wrote a government thesis on “Politics of the Funnies: The Influence of Political Cartoons on Public Perception of Political Leaders.”

The project required a survey, which he did by enlisting a crew of Bates friends, who, he noted in his acknowledgments, sacrificed a “Saturday morning to stand out in the cold.”

Best Use of an Abraham Lincoln Quote

Sarah Weinstein Knowlton ’96 wrote a chemistry thesis on “Lanthanide-Crown Ether Couples as Chiral NMR Shift Reagents.” In dedicating it to her mother, she quoted Lincoln: “All that I am or hope to be I owe to my mother.”

That means, “Thanks to Kirk [Read] and Denis [Sweet] for conversations that have helped me with this work so much.”

Best Acknowledgment of the Blue Goose’s Place in Bates Life

In her interdisciplinary thesis on “Redefining Disability: A Case Study of Community and Art,” Anna Schechter ’06 thanked the Blue Goose for its “perfect mixture of serenity and dysfunction.”

Best Use of a Shakespeare Quote to Name a Thesis Group

They called themselves “the Bunch,” and, being English majors, found a way to link the name to a telling line from English literature, specifically Measure for Measure:

Pompey: …’Twas in the Bunch of Grapes, where indeed you have a delight to sit, have you not?
Froth: I have so; because it is an open room, and good for winter.
Pompey: Why very well then: I hope here be truths.

Erin Culbreth Hotchkiss ’06 wrote a history thesis on “‘Rough Hearts’: A Study of the Christianization of the Anglo-Saxons from 410 to 640 AD as Viewed in the Context of the Transformations of the Christian Orthodox Church and the Western Roman Empire.”

She acknowledged that her inspiration to major in history came from Professor of History Michael Jones doing “Viking impressions.” Oh, do go on….

Best Thanks for Not Doing Something

Ashley Wentworth Kernan ’06 wrote a sociology thesis on “Are All White Jackets the Same? A Comparative Analysis of the Humanitarian Attitudes and Behaviors of Osteopathic and Allopathic Physicians.”

She thanked her fellow track and field teammates for “understanding not to say ‘the T word.’”

“Colorado, South Carolina, and Ecuador for constantly providing me the memories, and the tranquility and serenity that help me continue to wake up from my slumber each new day.”

Jamie Merisotis ’86 wrote a political science thesis on “Bail Bondsmen, Politics, and the Administration of Justice.” He thanked all the bail bondsmen he interviewed for his thesis, “bewildered as they were about the purpose of an academic study on their profession.”

Best Sequence of Nouns in a Thank You

Tracey Begley ’06 wrote an anthropology thesis on “NGOs in the Face of Developmental Criticism: Humanitarian Landmine Removal in Afghanistan.”

Julia Knight ’06, writing an art and visual culture thesis on “The Art of: Madame de Pompadour and Peggy Guggenheim,” dedicated her thesis to “women having sex all over the world, for pleasure or for power.”

Best Thanks for Helping to Find an Ocean, Or, the Ferdinand Magellan Award

Brian Dupee ’06 wrote a thesis on “The Effects of Baitworm Digging and Epibenthic Predation on the Growth and Survivorship of the Soft-Shelled Clam, Mya arenaria, and on the Abundance and Diversity of Soft-Sediment Infauna.”

He thanked fellow bio major Eben Sypitkowski ’05 because, if it weren’t for him, “I would still be driving around Woolwich looking for the ocean.”

Bates at Night: Hitting the books, the chai, and the Thesis Café