Interferons are a basic way that our bodies fight everything from the sniffles to certain cancers.

Released by cells when threatened, these proteins tell nearby cells to, in a sense, “interfere” with the work of sickness-causing pathogens, such as viruses, bacteria, parasites, and also certain tumor cells.

Scientists have long sought to understand the complex mechanisms by which interferons function. By understanding interferons, they can then make them more effective.

An article in the December issue of Nature Immunology, co-authored by Dana Professor of Chemistry Glen Lawson, suggests that they’ve found a way. The study was directed by Michael Holtzman, and the lead author is Yong Zhang, both of the Washington University School of Medicine.

What they’ve done is make cells have “hyper-responsiveness to interferon” (a good thing) and also have “markedly improve[d] antiviral function” (a great thing). The work was done on mice cells and some human cells in the lab. 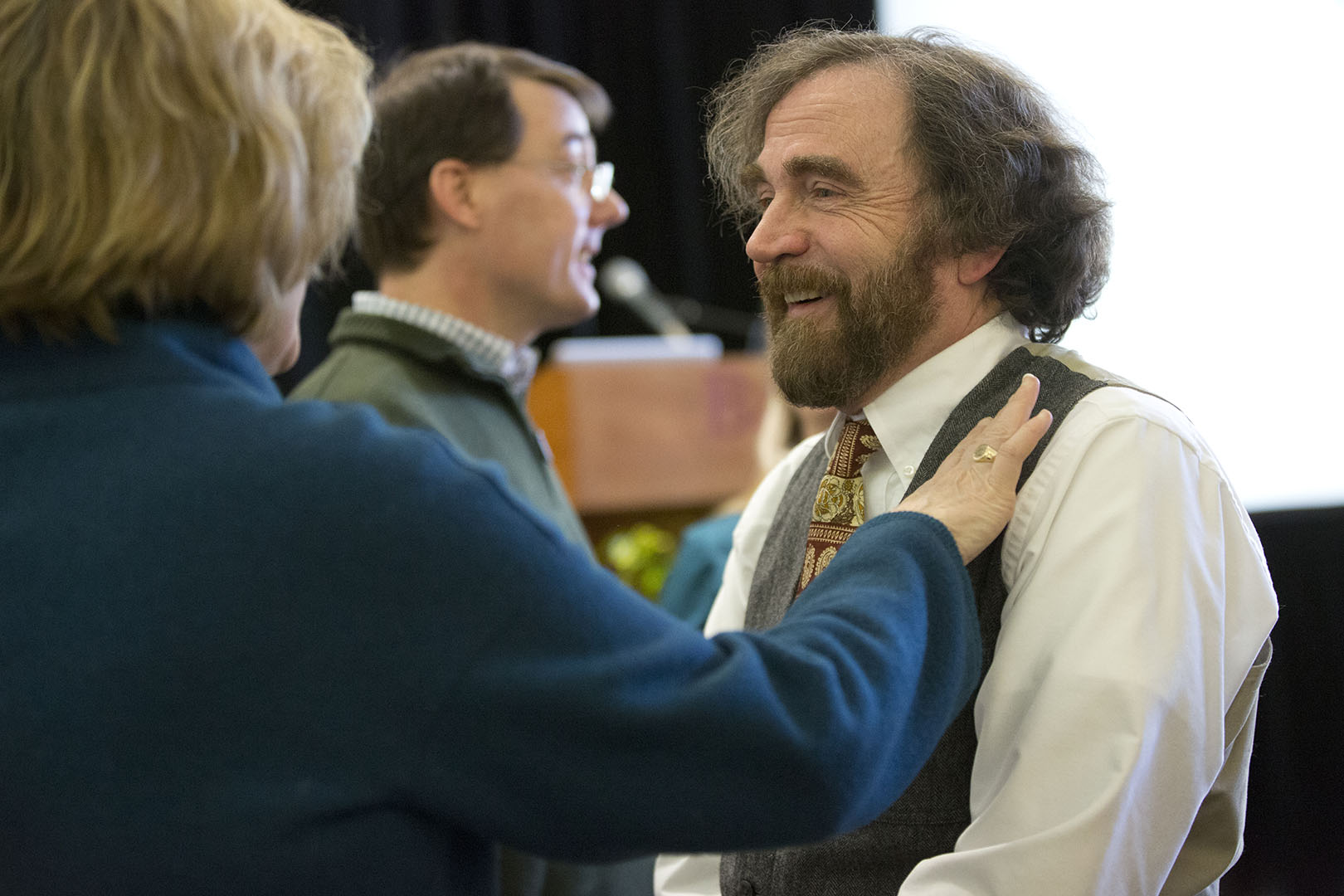 Glen Lawson receives congratulations from President Spencer at the celebration of his appointment as the Charles A. Dana Professor of Chemistry. (Phyllis Graber Jensen/Bates College.)

They achieved this hyper-responsiveness by stimulating the interferon antivirus response at the gene-expression level.

The scientists discovered that this response depends upon a certain type of protein, known as an “ubiquitin ligase,” which does two things: It stimulates interferon-activated gene expression and it participates in the destruction of a key viral protein.

Lawson is an expert on ubiquitin ligases and researches their role in infections of mammalian cells by picornaviruses, a family of viruses responsible for causing a large number of diseases.

The paper to which he contributed is “PARP9-DTX3L Ubiquitin Ligase Targets Host Histone H2BJ and Viral 3C Protease to Enhance Interferon Signaling and Control Viral Infection.”

A tribute to a man who “pushed us forward and softened our falls with equal grace.” — Inside Lacrosse

Sandler died Nov. 19 while on a recruiting trip, reportedly collapsing during a workout.

Sandler played for Lasagna and later was one of his assistant coaches. The column begins with a story about Sandler’s reaction to a great disappointment, when Lasagna did not name him the Bates captain in his senior year, 2001-02. 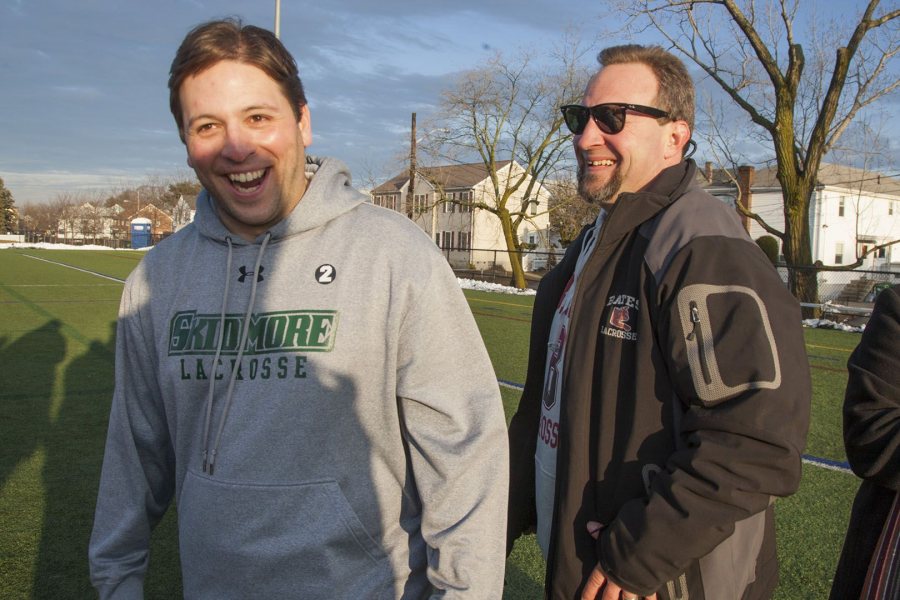 Sandler’s reaction was to seek out Lasagna to discuss his feelings.

“I learned a lot about Jack Sandler’s character that day,” writes Lasagna. “He chose dialogue over repression and resentment. Even when talking about serious disappointment around what mattered most to him, he engaged, listened, and learned.”

As Sandler graduated and moved into coaching, he maintained that ability. “He pushed us forward and softened our falls with equal grace,” Lasagna writes.

A memorial service for Jack Sandler will be held at Colby College, in the Lorimer Chapel, at 10 a.m. Saturday, Dec. 5.

Kate Gilmore ’97 won one of two $200,000 juried grand prizes for her installation “Higher Ground” in a competition sponsored by ArtPrize and held annually in Grand Rapids, Mich.

An installation that’s better seen than described, “Higher Ground” took over a single-family dwelling on Rumsey Street where, around the clock, women in long white dresses and red shoes swayed back and forth on swings mounted from the ceiling in front of, and sometimes through, open windows.

This video was produced by Michigan Live:

Juror Lisa Freiman, director of Virginia Commonwealth University’s Institute for Contemporary Art, described it as “a rich experience,” while juror Michael Rakowitz, a Chicago-based artist, said it was “like a hallucination.”

Freiman called it the “most ambitious piece in all of ArtPrize.”

Gilmore’s installations typically include and combine media like video, sculpture, photography, and performance, and she has exhibited at the 2010 Whitney Biennial, the Brooklyn Museum, and The J. Paul Getty Museum, among other locations and venues.

During ArtPrize, self-described as a “radically open international art competition decided by public vote and expert jury,” three square miles of downtown Grand Rapids become an “open playing field where anyone can find a voice in the conversation…. It’s unorthodox, highly disruptive, and undeniably intriguing to the art world and the public alike.”

“These CEOs are building successful companies with leadership chops far beyond their years.” — Inc.

Named by Inc. as one of the magazine’s “Five Rising Stars of America’s Startup Scene,” Ben Schippers ’04 is co-founder of Brooklyn-based software engineering firm HappyFundCorp. 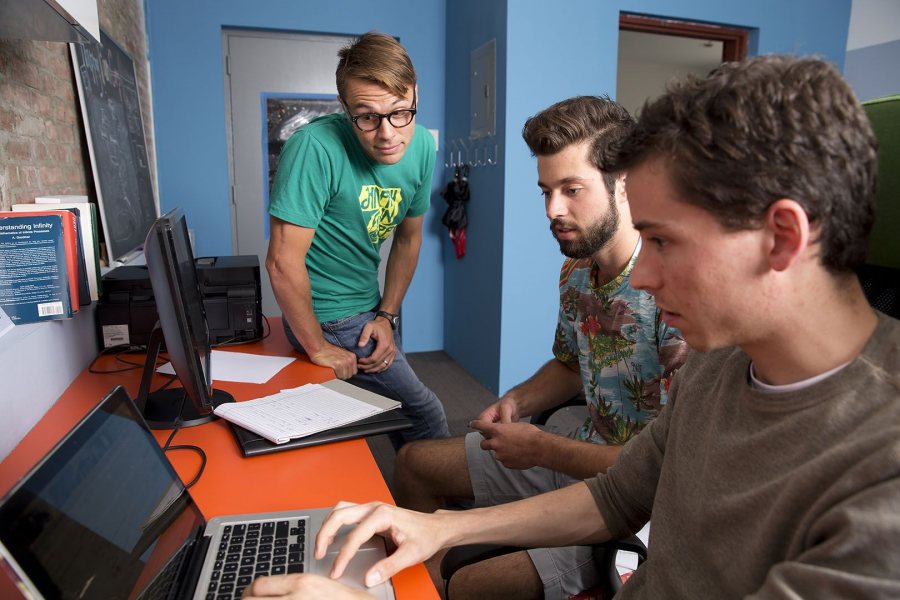 Beyond the numbers, Schippers tells Inc. that he makes it “clear to our people that if you’re not happy, you should take an active role in figuring out what you need to get there.”

He adds, “I encourage people to put no more than three items on their to-do lists each day. If you aren’t overwhelmed, you’re going to function much better at work.”

America was where he needed to be — WBUR

Paul Okot ’11, a Bates psychology major, has founded the International Resource Center, a nonprofit that provides interpretation and translation services in Portland, Maine.

WBUR, the NPR station in Boston, featured his story of coming to the United States as a Sudanese refugee at age 7.

Bates is the best theater college in Maine, says blogger Chris Peterson of On Stage, noting how the major has “two tiers,” one being “theater studies, a general introduction to all areas of theater culminating in a research thesis.”

The other tier is called “theater makers,” a more “intense study of theater with emphasis in either acting, directing, playwriting, or design leading to a creative thesis.” 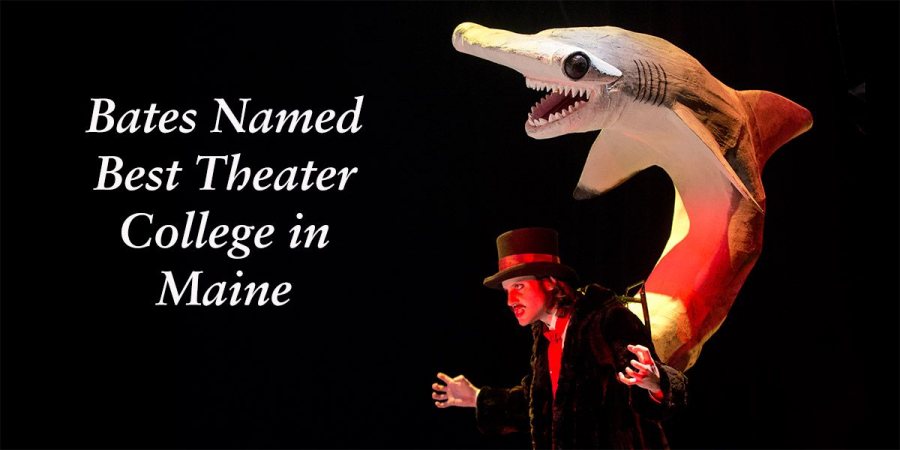