‘They’re all here for you’: A Bates farewell to James Jhun ’16 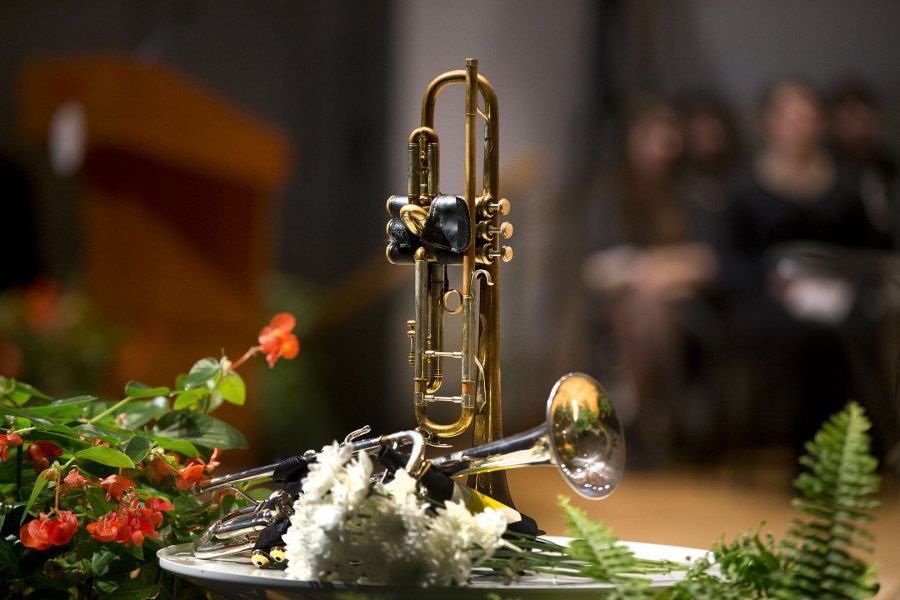 Trumpets belonging to the late James Jhun ’16 are displayed during the memorial service and celebration of his life on Jan. 22 in the Olin Arts Center Concert Hall. (Phyllis Graber Jensen/Bates College)

With stories, pictures, more than a few tears, and plenty of the music that was so central to his being, the Bates community said goodbye Jan. 22 to James Jhun ’16, a man remembered by a friend as “one of the most gracious and intelligent men I’ve ever met.”

The Olin Arts Center Concert Hall was the setting for a loving memorial service for Jhun, who died unexpectedly of unknown causes in Lewiston on Sunday, Jan. 17.

For the campus community, which came together en masse for the celebration of his life, the afternoon service was a farewell embrace for one of Bates’ most distinctive students.

And for anyone who never had the good fortune to meet Jhun, the occasion was a deeply moving introduction to a real Bates renaissance man: a jazz trumpeter, a cappella singer, animal lover, imaginative and determined student of science, beloved son and brother, and friend who “remained unwaveringly loyal to those who loved him,” in the words of Emily Baumgarten ’16. 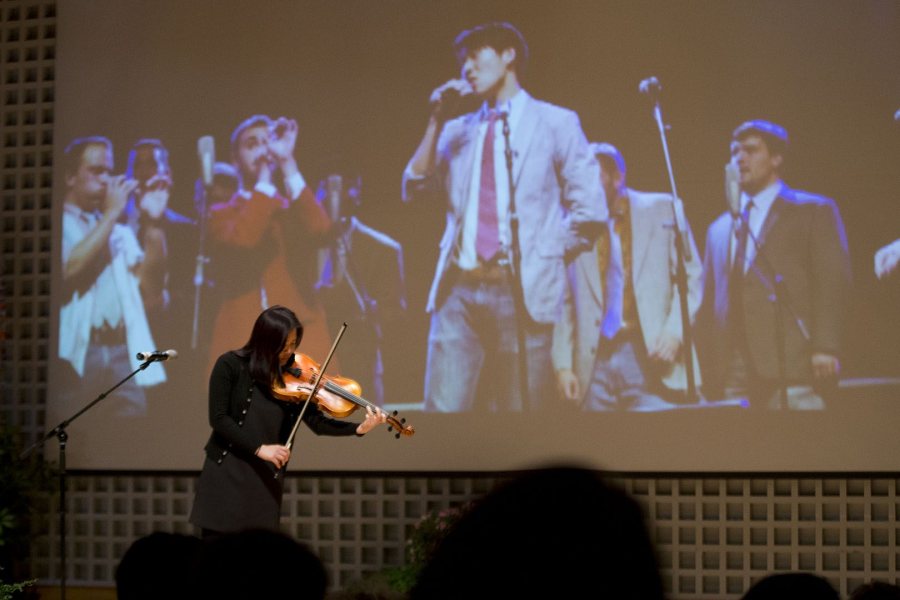 A projected image shows the late James Jhun ’16 singing with the Manic Optimists, his a cappella ensemble, as So Hee Ki ’16 performs a work by Bach during the celebration of his life on Jan. 22. (Phyllis Graber Jensen/Bates

Two students, including Baumgarten, and two faculty members shared memories of Jhun. Baumgarten, who first met him when they were first-year participants in an AESOP orientation trek, described him as a singer “you would never forget” and as someone who “did not half-ass any aspect of his life.”

“How do you start a speech about someone as great as James?” wondered another close friend and classmate, Gordon Batchelder. “He was multitalented beyond belief and passionate about more things than he could handle.”

Batchelder’s humorous story about the long run-up to the pair becoming roommates — an arrangement finally brokered, like a date in junior high school, by a friend — filled the auditorium with laughter.

A music minor and longtime member of the Bates Jazz Band, for which he was lead trumpeter at the time of his death, Jhun had worked closely with band director and jazz pianist Tom Snow. In commemorating his protégé, a visibly moved Snow used the metaphor of jazz improvisation to convey Jhun’s approach to life — courageous, prepared, and committed to following wherever the music leads.

The fourth Bates community member to share recollections of Jhun, who was an environmental studies major, was his adviser, Associate Professor of Environmental Studies Holly Ewing. She revealed her delight in working with a student with the breadth of Jhun’s interests and the joy he took in pursuing those interests.

As it was to Jhun’s life, music was integral to the memorial service.

Ewing also expressed her pleasure and surprise with Jhun’s idea for the senior thesis project he undertook, advised by biology professor Karen Palin: an investigation of the effectiveness of routine laundry practices in removing common bacteria from students’ socks. (Not very effective, as it turned out.)

As it was to Jhun’s life, music was integral to the memorial service. In a transcription for viola, So Hee Ki ’16 performed the prelude from J.S. Bach’s Cello Suite No. 2 in D minor, reflecting the churn of emotions felt by so many in the room.

The Manic Optimists, Jhun’s a cappella ensemble, were joined by a few friends for Michael Jackson’s “Man in the Mirror” and the Meredith Willson show tune (via the Beatles), “Till There Was You.” Singing lead on the latter, a favorite song of Jhun’s, was his classmate and longtime musical collaborator Isabel Koyama. 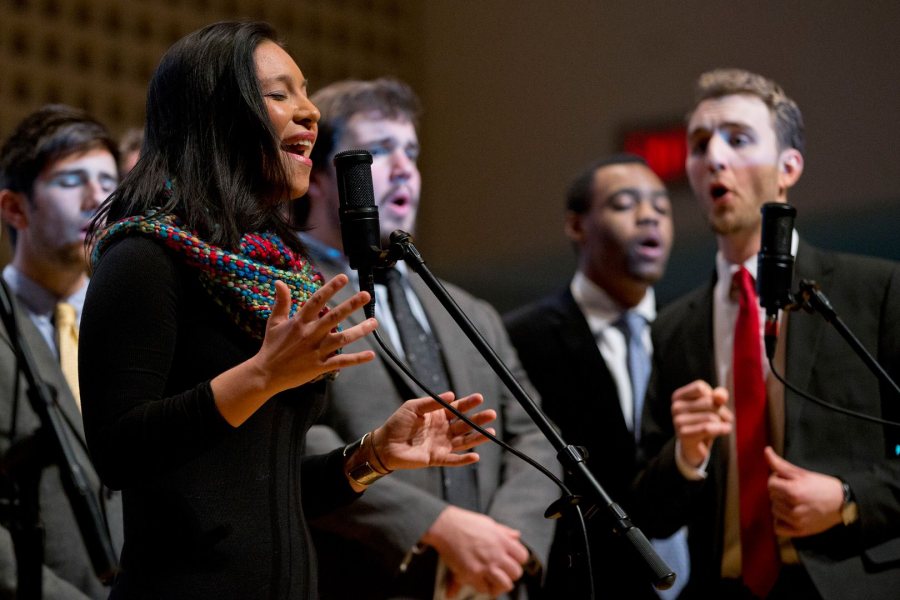 Supported by the Manic Optimists, Jhun’s Bates a cappella ensemble, Isabel Koyama ’16 sings “Till There Was You” during the celebration of his life. Jhun, Koyama, and Jonah Greenawalt ’16 had created the arrangement for the Meredith Willson song. (Phyllis Graber Jensen/Bates College)

The Jazz Band offered a pensive take on Pat Metheny’s “Always and Forever,” with outstanding contributions from pianist Divyamaan Sahoo ’17 and flutist Becky Schwartz ’16. Later, we heard an evocative compilation from recordings of Jhun trumpet solos with the band — light-spirited, smart, seemingly effortless — that were accompanied by projected images of him.

Pausing frequently to manage tears, Iny Jhun offered a eulogy that was, by turns, funny and deeply sorrowful.

The heart of the ceremony was the participation by James’ family: his sister, Iny Jhun, who traveled up from Boston, where she is studying; their father, Professor Byung Hak Jhun, who came to Bates from South Korea; and their mother, Eunmi, who was not well enough to make the trip from Korea, but whose role was nevertheless central. 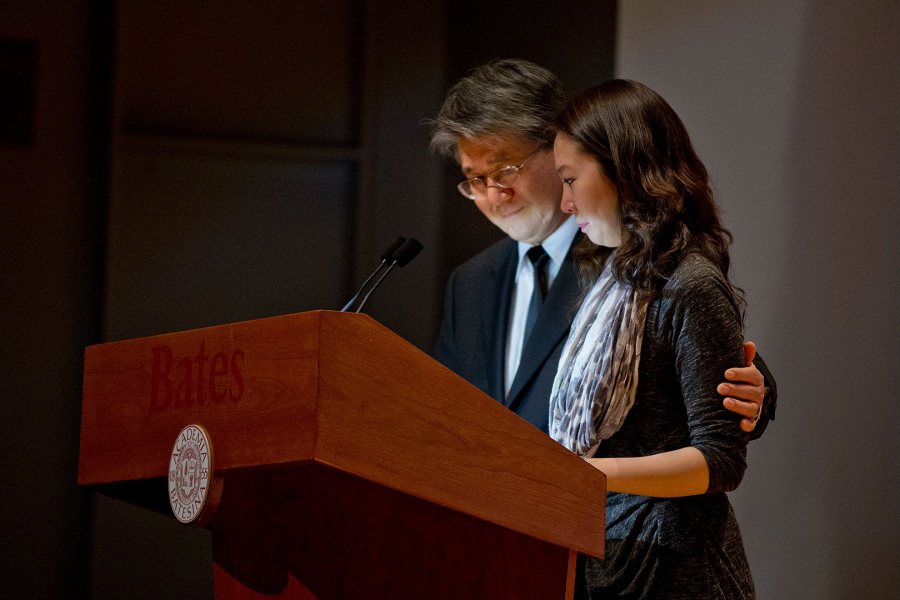 The father of James Jhun ’16, Byung Hak Jhun, and James’ sister, Iny Jhun, read a prayer for James during a Jan. 22 memorial service. The prayer was composed by Eunmi Jhun, mother of James and Iny and wife of Byung. (Phyllis Graber Jensen/Bates College)

Pausing frequently to manage tears, Iny Jhun offered a eulogy that was, by turns, funny and deeply sorrowful. In classic big-sister fashion, she jokingly took credit for many milestones in James’ life, from urging her parents to supply her with a sibling, to his choosing Bates as his college, to helping analyze the data for his thesis.

“You have been a wonderful gift to me and to everyone around you,” she told her younger brother. “See all these people in the audience? They’re all here for you. I didn’t know you were this popular.” 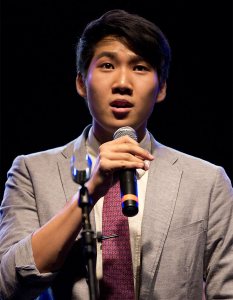 “James, you have always given my life meaning and hope, and you always will,” she concluded. “I love you.”

Accompanied by an English reading from Thomas Graziano ’16, Byung Hak Jhun read in Korean from Revelation 21:1–4. The verse was selected by Eunmi Jhun: “[God] will wipe every tear from their eyes. There will be no more death or mourning or crying or pain, for the old order of things has passed away.”

James’ mother also composed a communal prayer, unforgettable in its anguish and faith, that her husband read and their daughter translated from Korean. In part, it read:

“I want to lift up prayers knowing the deepest depth of God’s heart, where you are now, and talk to you for the rest of my life.

“I await the day that the Lord returns to this world, the day when you will be leading worship with the trumpet.”