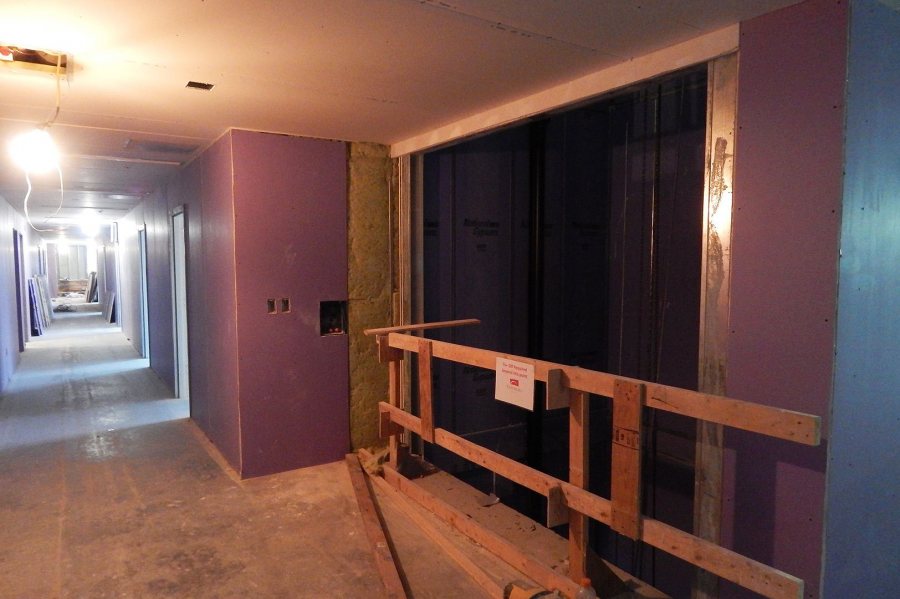 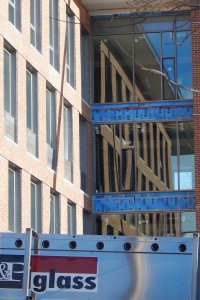 A man studying plans in the basement electrical room of 65 Campus Ave. has asked us not to exit the building through a certain door. He’s concerned that the door, a temporary plywood affair, might blow open and let the rain in.

Passing that door on our way upstairs, we see that his concerns were justified: There’s a puddle on the concrete where the howling wind pushed the door in, along with a bucket of sand intended to hold it shut.

Elsewhere in the building, where plastic sheets cover large window openings, the wind makes the poly billow and bang like sails in a tempest.

It’s the afternoon of Feb. 16, a day when snow and rain are bridging a spell of arctic cold and a few days of unseasonable warmth. To get between buildings, we follow Bates project manager Chris Streifel over a slick pudding of ice, snow, and mud as the rain rattles on our hard hats. 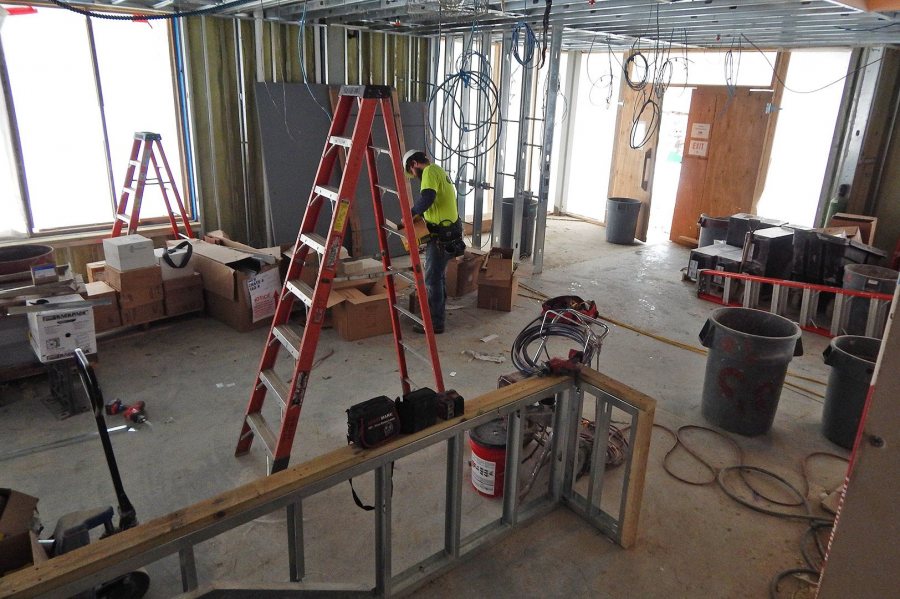 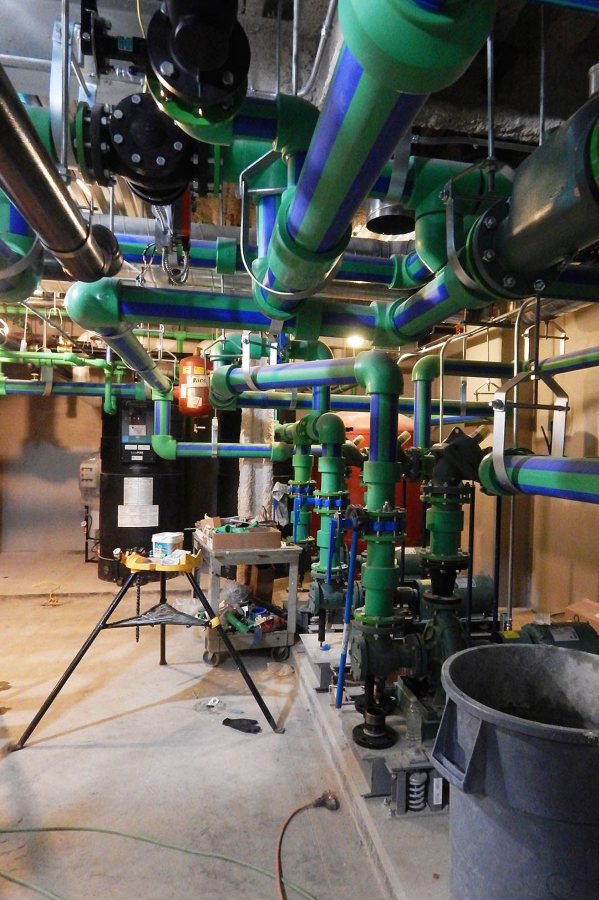 This complex of valves in the basement controls the clean water supply at 65 Campus Ave. (Doug Hubley/Bates College)

Such harsh conditions are something for Campus Construction Update to wax poetic (or something) about — but it’s just another day on the job for the dozens of workers building Bates’ new student residences at 65 and 55 Campus Ave.

Most of them, anyway. It’s true that the weather has provided a day off for the people doing exterior work. And even if it hadn’t, their numbers are dwindling as they finish their assignments.

The Maine Masonry crew, in particular, continues to shrink. Having recently finished a major granite façade at No. 55, on a narrow wall facing Franklin Street, the masons are completing smaller installations and will drop out of the picture for a while within a couple of weeks.

“They’ll be back in the spring to finish up some things,” Streifel says. 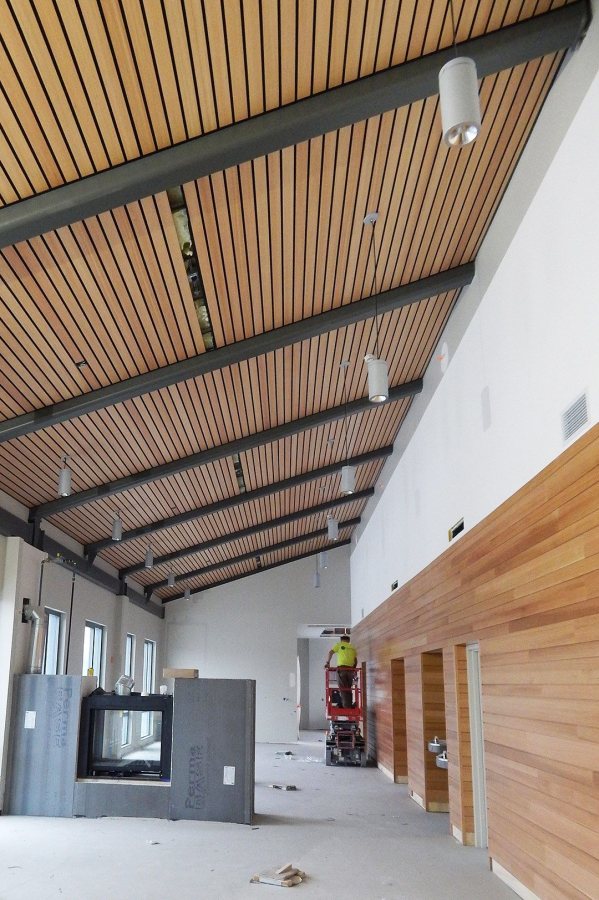 An electrician hangs light fixtures in the “Treehouse,” the fourth-floor rec room at 65 Campus Ave., on Feb. 16, 2016. (Doug Hubley/Bates College)

Meanwhile, glaziers from the Augusta firm Oakes & Parkhurst are pushing ahead with placing plate glass, aka storefront, in the large openings where the wind was punishing the polyethylene during the storm. That work could be done by mid-March.

As agreeable as the views through the storefront will be for the inhabitants of 65 and 55, these expanses of glass will improve the visuals for passers-by, too. In the previous update, we discussed the impression the new dorms are making on the Campus Avenue streetscape. One goal of the design by Ann Beha Architects was to minimize the sense of height and weight created by the four-story, two-wing structures.

The storefront glass, especially on the building corners, is important to that goal, easing both the hard angularity and the sense of mass. 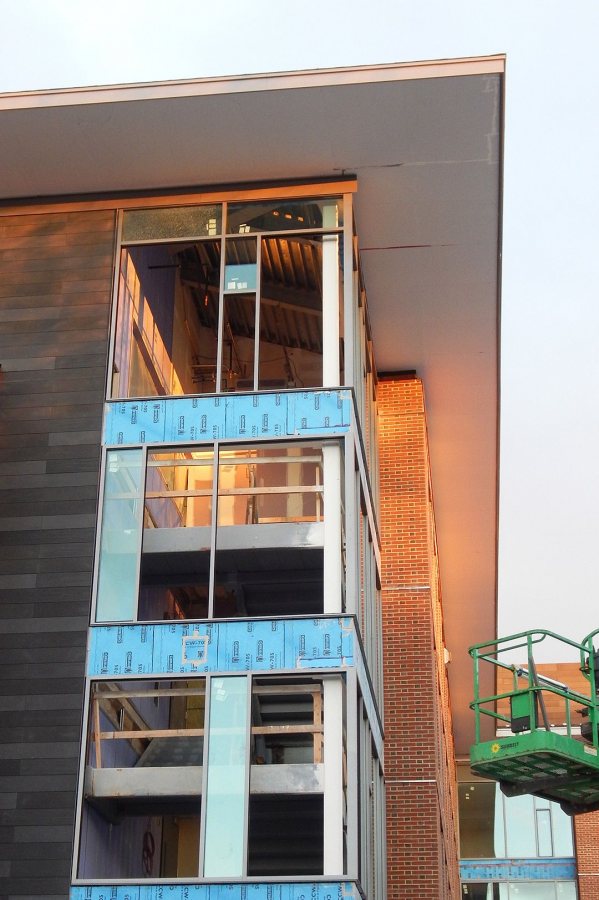 Installation of plate glass has begun on this stairwell at 65 Campus Ave. Photographed on Jan. 27, 2016. (Doug Hubley/Bates College)

Less conspicuous but no less important, both functionally and cosmetically, technicians from Industrial Roofing continue to install sheet-metal fascia and soffit coverings, of which there will be plenty. Like the glaziers, they will likely finish up in March — at which point, Streifel explains, the project team would prefer to have as few lifts, or cherry pickers, as possible on the construction sites.

Otherwise they would get in the way of the grading, landscaping, and other site work that needs to commence as soon as weather permits.

In other words, folks, the home stretch for this phase of the Campus Life Project that Bates announced two years ago is now coming into view.

Inside the buildings, too, progress is abundantly evident. Substantially complete are spaces in both buildings that house the mechanical and electrical hearts of systems that will provide heating, lighting, plumbing, fire protection, security, and communications. 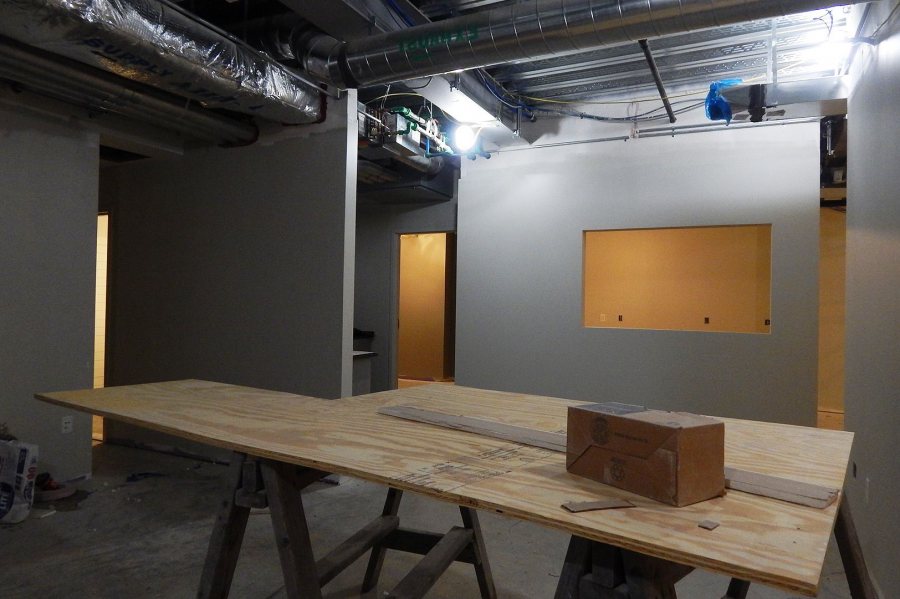 The mail and printing functions of Office Services will occupy this space in the basement of 65 Campus Ave. (Doug Hubley/Bates College)

For example, our tour of the 65 Campus Ave. basement reveals, among other infrastructure: 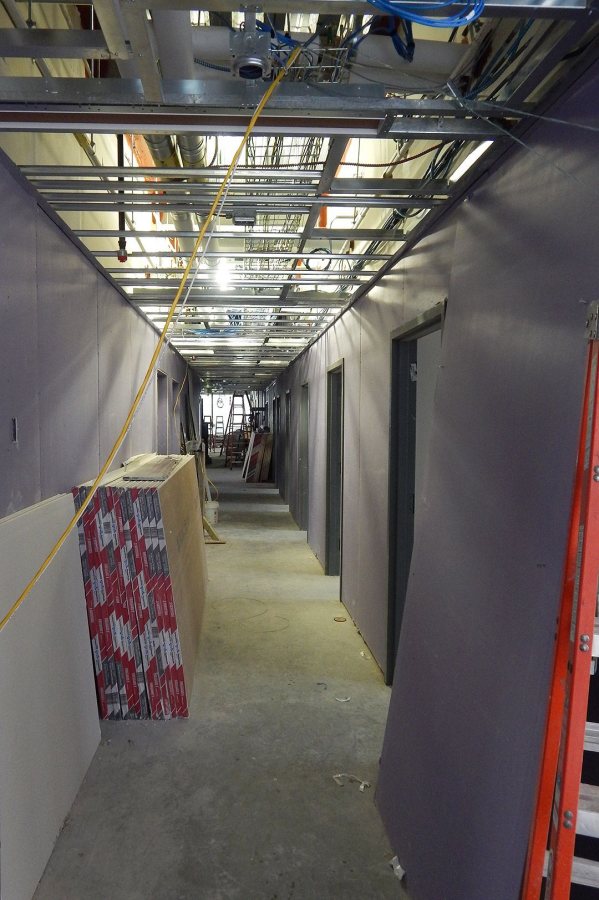 Raw drywall, no tape, no mud: A residential corridor on the second floor of 55 Campus Ave. (Doug Hubley/Bates College)

“They’re on the home stretch down there,” Streifel says. “Now they’re making all the final piping connections, final wiring, controls — key details. They’re looking to begin startups on a lot of that equipment in March and April, and some of it sooner than that.” The IT network, for instance, will begin to come to life next week because building systems such as lighting and security depend on it.

Of course, activating these different systems is less straightforward than, say, pulling the lever and pushing the two or three buttons that make the starship Enterprise go faster than light. For any given system, “there’s a particular sequence they’ll follow to turn on equipment for the first time, to test it, and then to start bringing all the systems together,” Streifel explains.

In cases such as the electrical switchgear, generator, and certain major mechanical equipment, manufacturers will even send representatives to help with the startup.

Elevators have been or are being installed in both buildings. In the fourth-floor “Treehouse” at 65 Campus Ave., a decorative red oak wall covering is in place. The tiling in the spacious kitchen is essentially finished, and an electrician is just hanging the last pendent light fixture as we pass through.

Meanwhile, as Streifel points out, the infrastructure “rough-in” — the running of wires, pipes, etc., to their terminal points behind walls and above ceilings — is close to finished. This allows trades such as the drywall hangers, painters, and carpenters to finish off rooms. And that work is proceeding in leaps and bounds. 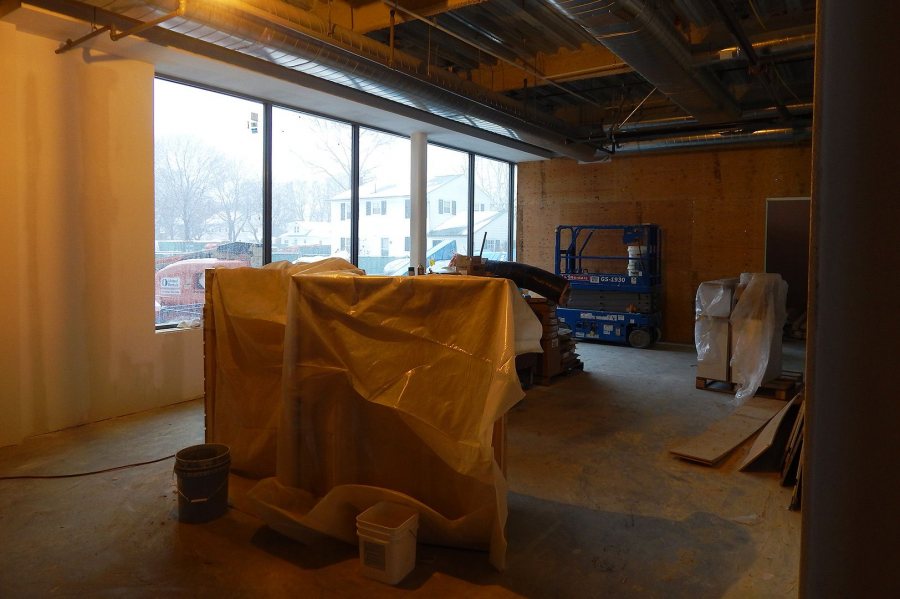 This space on the first floor of 65 Campus Ave. will be the College Store’s textbook area. (Doug Hubley/Bates College)

Climbing from the first to the fourth floors in either residence allows a visitor to see, more or less, successive stages of progress with the student rooms. This is because of the organizing principle for the work: Each trade has proceeded from the fourth story down (for the most part). And they do the corridors last, because otherwise, well, goodbye flawless wall surfaces. 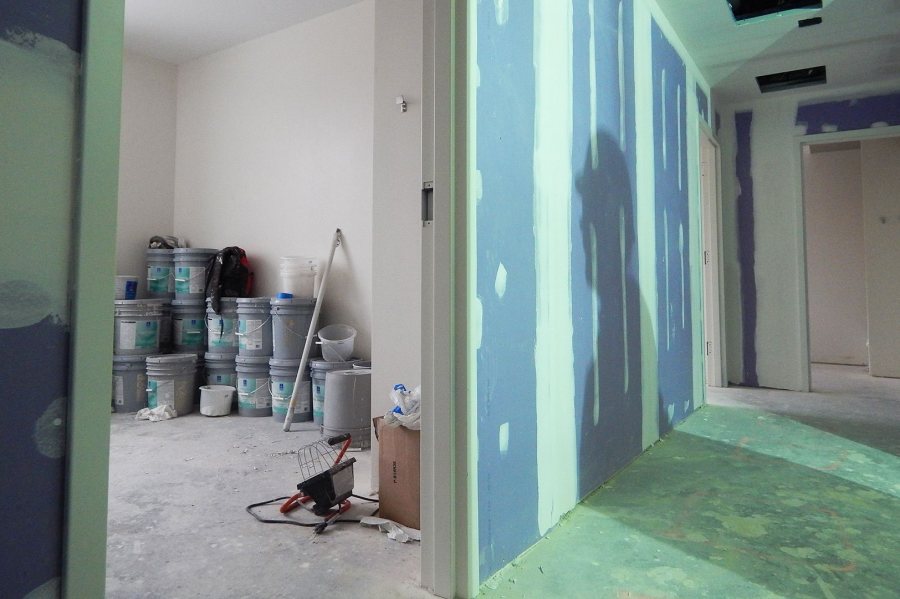 Drywall, taped and mudded. These rooms on the third floor of 55 Campus Ave. belong to an asymmetrical cluster at one end of the building. There’s a similar enclave on the second floor, and one each on the same floors of 65 Campus. (Doug Hubley/Bates College)

So — at the risk of oversimplifying — in a second-floor student corridor in 55 Campus you’ll see bare drywall fastened in place; on the third floor, the drywall seams have been taped and “mudded”; on the fourth floor, the walls have been primed and given the first coat of finish paint.

A completed student room — and there are quite a few in No. 65 at this point — will have all its paint, fittings like towel racks and shelves, interior trim on the window units, cover plates on the light switches and outlets, and gray wood-look vinyl flooring. All that’s left to do is to give it a good cleaning. 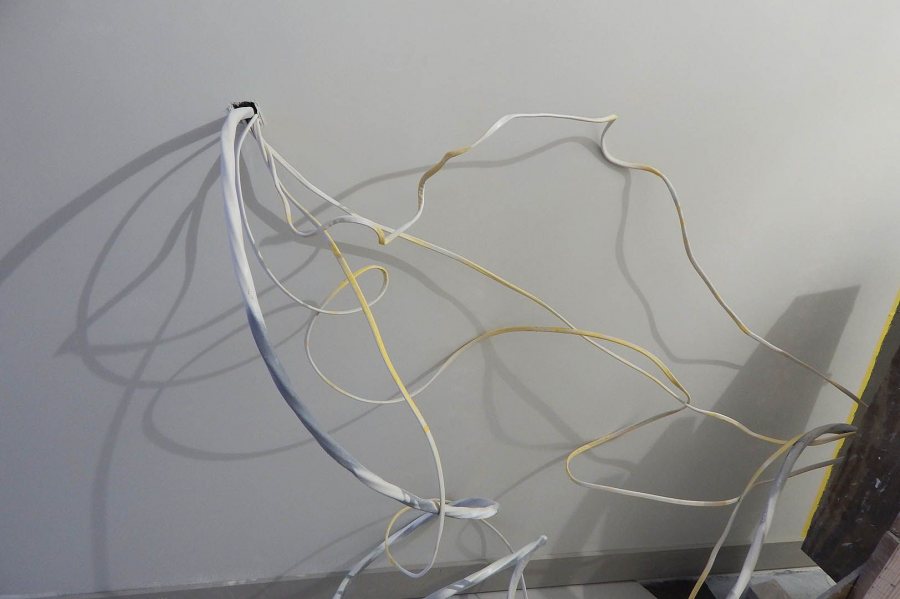