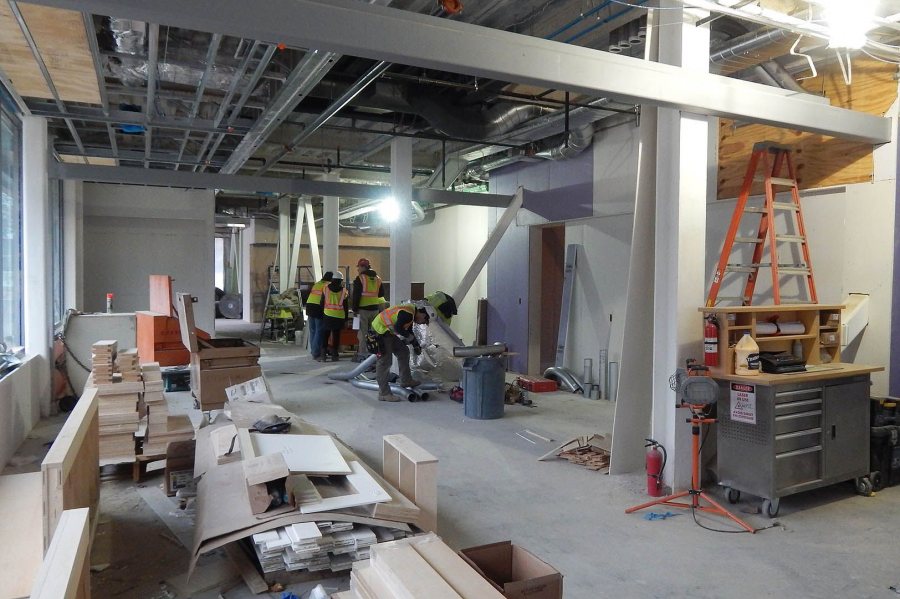 In store for Bates: While architects from the Ann Beha firm consult with a Consigli Construction executive, a ventilation technician cuts a piece of duct on Jan. 12, 2016. The Bates College Store will occupy this space in 65 Campus Ave. (Doug Hubley/Bates College)

In most building projects, at least the ones above ground level, there comes a transition in the parade of progress when you can get a vivid sense of how the new structure will interact with its surroundings. 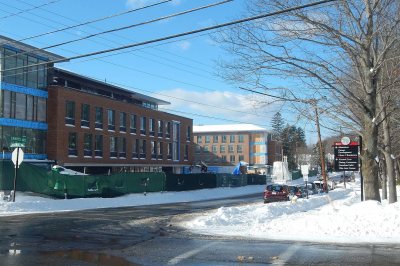 With the 65 Campus Ave. residence at left and the Muskie Archives quad at right, the Central-Campus intersection will serve as the gateway to campus. Note the dorm’s storefront glass and stepped-back fourth floor. (Doug Hubley/Bates College)

For Campus Construction Update, witnessing that transition is one of the best parts of the job (second only, perhaps, to loitering in the Den wearing a hard hat, orange safety vest, and mirrored sunglasses).

That revelatory metamorphosis is happening now for the two Campus Life Project student residences being built on the south side of the Bates College campus. 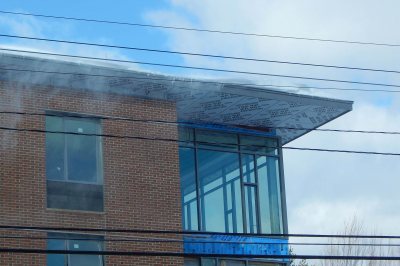 A closer view of storefront glass on the 65 Campus Ave. residence on Jan. 13, 2016 — a gusty day following a moderate snowfall. (Doug Hubley/Bates College)

True, there’s still considerable exterior work to be done on the dorms, not to mention site work and landscaping that won’t happen till spring. But in terms of grand impressions, 55 and 65 Campus Ave. appear to passers-by today very much the way they will appear when they’re complete, next summer.

And increasingly, you can appreciate the strategic design choices that the Boston firm Ann Beha Architects, guided by the Bates community, have made.

“There are important things that we’ve tried to achieve with the scale, the arrangement, and the design of the buildings,” says Chris Streifel, Bates’ project manager for the residences. “ABA really drove that process, with campus input from a lot of different groups on how the buildings look and integrate with the campus.” 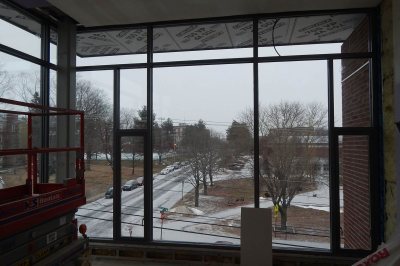 The view up Campus Avenue from the fourth-floor technology room of 65 Campus Ave. on Jan. 12, 2016. (Doug Hubley/Bates College)

At four stories each, the new dorms aren’t small. But one thing Bates didn’t want, in Streifel’s words, was “a canyon-like effect” that would result if the new buildings buddied up too close to Campus Avenue, especially with Carnegie and Chase looming across the street.

So only 65 Campus, which will house the College and Office Services, sits near the street. The bulk of No. 55 is way back on its lot. 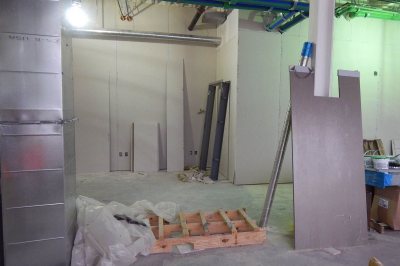 The future home of Office Services, shown on Jan. 12, 2016. The pastel lighting is an artifact of the digital camera — too cool to correct! (Doug Hubley/Bates College)

To further reduce the urban-canyon feel, the roofs of both buildings have a relatively shallow pitch. And, in an oldie-but-goodie tactic, a fourth-floor setback on each building markedly reduces the impact of those top floors from some angles.

(The setbacks also create the perception that there’s a fourth-floor terrace on each building, which would be way cool — if it were true. But those flat places are just roofs and will be inaccessible from the inside.)

These measures bring the buildings’ perceived height “down to a level that seems a little more approachable,” says Streifel. “To me, it looks like they’re scaled perfectly with Lewiston Middle School in the background and with our nearby buildings.” 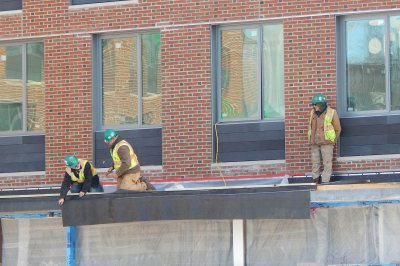 The design team also wrangled with the dorms’ attitude toward both the neighborhood and the rest of campus across the street. Hence the orientation of the L-shaped buildings to one another — as seen from on high, they’re positioned like diagonally opposed corners of a rectangle.

“It creates a flow between the neighborhood and campus,” Streifel says, “a visually open feeling. And it creates a nice green space in the front” — which, this being January, we’ll just have to imagine for a few months.

At the moment, between the construction fence and the expanses of mud and snow within it, the physical gap between Nos. 55 and 65 seems uncomfortably broad. But that impression won’t last. In time, both plantings and hardscaping — the use of pavements and other masonry features — will seem to draw the dorms closer together.

Taller greenery will screen spaces that are “left open to allow community members to throw a ball around, throw a Frisbee around, lay outside and catch the rays,” says Streifel. 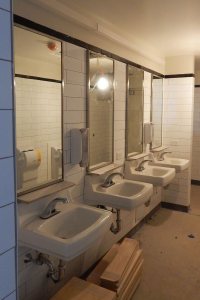 The public sidewalks around the site will be asphalt, in keeping with the neighborhood, but in the open space between dorms “we’ll have a lot of brick pavers at the front of the buildings,” where most activity is expected to occur. “Those will provide a nice unifying feature.” In particular, a major brick walkway paralleling the public sidewalk will directly link the two buildings.

Finally, for visitors, the intersection of Central and Campus avenues will become a distinct, if understated, gateway to campus, with glassy 65 Campus Ave. at your left and the tree-shaded Edmund S. Muskie Archives on your right.

“You’re going to roll up and see this new building with beautiful architecture and landscaping — and you’ll know you’ve arrived,” Streifel says. Visitors who have picked up takeout at Luiggi’s and are approaching via College Street will just have to go around the block. 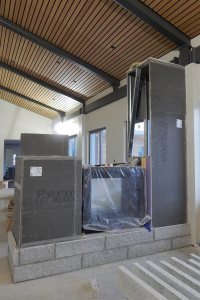 A fireplace being built in the Treehouse, the fourth-floor rec room at 65 Campus Ave. (Doug Hubley/Bates College)

A high of 187: Jan. 12 was a red-letter day for the Campus Avenue project as the number of workers on the job reached its peak: 187, affiliated with 20 or so different subcontractors.

That total will drop off in two or three weeks as exterior work winds down. For example, with bricklaying complete, Maine Masonry has downsized its Bates crew, which is now finishing granite installations and will likely tip its mortar board in farewell, so to speak, by early February.

In other exterior progress, Oakes & Parkhurst Glass has installed nearly all the prefab window units, with just a dozen left to do on 55 Campus Ave.

Still ahead for that Augusta firm is putting in more storefront — the large sheets of glass whose complex frames, designed to keep glass, warmth, and water where they belong, will be pieced together on the spot. 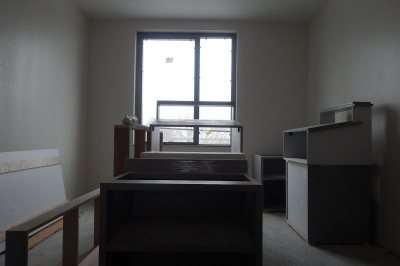 A double room on the fourth floor of 65 Campus Ave. serves as temporary storage for kitchen cabinetry on Jan. 12, 2016. (Doug Hubley/Bates College)

The storefront that has been finished, on the ground floor of No. 65 and climbing the corner of that building where Campus and Central avenues meet, is very pretty. We’re looking forward to seeing it replace the dull poly film and plywood currently covering most of the large window openings on the two buildings. 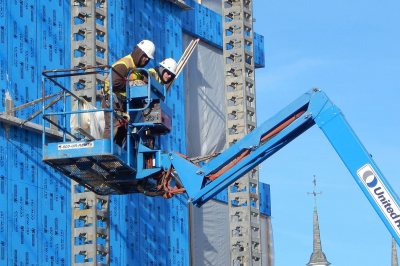 The first week of January saw a crane on campus hoisting a variety of HVAC machinery onto the dorm roofs. The equipment includes air handlers equipped to recover warmth from exhaust air. Unique to No. 65 are water chillers that will help with climate control — a big one for both buildings, and smaller units dedicated to cooling the IT room at 65.

And in between snowfalls, there’s been work on utilities, stormwater disposal, and other chores on the construction sites. So, despite winter, there’s a lot of outside work going on (we’re getting worn out just describing it). 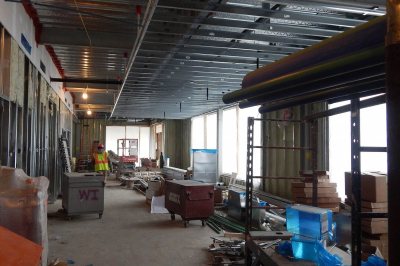 The lobby of 55 Campus Ave. on Jan. 12, 2015. The workman is headed toward Campus Avenue. (Doug Hubley/Bates College)

But that’s nothing compared to the interior stuff.

At 65 Campus Ave., all 74 student rooms — 38 singles and 36 doubles — have been framed in, dry-walled, primed and given the first coat of finish paint, an unassuming off-white. The placement of the floor covering, a dark gray, LEED-compliant wood-grained resilient product, is underway on the third and fourth floors.

The installation of bathroom tiling — glossy white “subway” tiles — is well along. Likewise the bathroom fixtures, including powerful Dyson Airblade hand dryers that are a far cry from the burlap towels, recycled from potato sacks, that Campus Construction Update had to use back at the old state university. 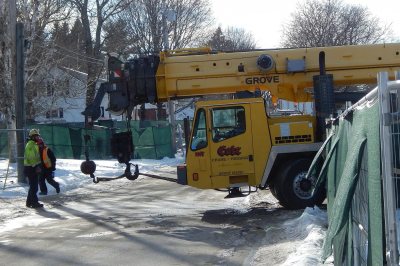 Having hoisted HVAC equipment to the roofs of both new student residences, a Cote Crane & Rigging telescopic crane pulls onto Franklin Street on its way back to Auburn on Jan. 7, 2016. (Doug Hubley/Bates College)

And all that same work is happening at No. 55, just a couple of weeks behind its sibling.

Can we talk? Campus Construction Update welcomes your questions and comments about current, past, and future construction at Bates. Write to dhubley@bates.edu, putting “Campus Construction” or “Burlap? That’s nothing! We had to dry our hands on old cardboard!” in the subject line. Or use the 21st-century commenting system below.