Quotes heard during admission decisions — and what they mean

During the winter months, the Bates Admission team gathered in Lindholm House to review the 5,300-plus applications for the Class of 2010. (Sarah Crosby/Bates College)

After several visits to this year’s Regular Decision admission committee sessions in Lindholm House, and hours of discussions, deliberations, and votes, we have two major takeaways.

First, there are do’s and there are don’ts when it comes to applying to Bates (and most other selective liberal arts colleges).

Second, the Bates Admission deans seek to answer, to the best of their abilities, two overarching questions: Is this student right for Bates? And is Bates right for this student?

To answer that huge question, they rely on a veritable flowchart of questions: Will she thrive academically? What’s his potential? How will he grow? Will she contribute to our community in dynamic ways? And, importantly, does she want Bates?

This year, applications for admission arrived from Maine, Minnesota, and Mississippi — not to mention Malawi, Malaysia, and Maldives — and from every other U.S. state except South Dakota, and from 92 additional countries around the world.

All told, Bates received 5,356 applications to the Class of 2020. Of that grand total, several hundred were reviewed during two rounds of Early Decision. The balance, some 4,900 Regular Decision applications, were reviewed and decided upon in early March.

Ultimately, the goal of the 10-member Admission Committee’s decision-making is to enroll a class of approximately 500 first-year students come fall.

That applies to what the Bates Admission deans are seeking in every candidate. They look for evidence that a candidate can make contributions to Bates. In this case, a dean notes that a student with a track record of community engagement would be a good fit for the college’s Bonner Leader Program, overseen by the Harward Center for Community Partnerships.

“So what is the rigor, though?” 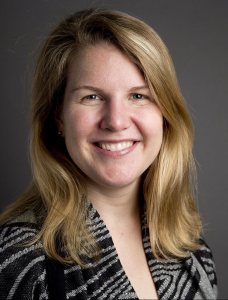 “We know that the best predictor of academic success at Bates is the high school transcript,” says Dean of Admission and Financial Aid Leigh Weisenburger. (Phyllis Graber Jensen/Bates College)

Bates has a test-optional admission policy, meaning students are not required to submit SAT or ACT scores to apply.

“Students who submit scores at the point of application, and those who do not, perform almost precisely the same at Bates,” Dean of Admission and Financial Aid Leigh Weisenburger says.

“We know that the best predictor of academic success at Bates is the high school transcript.”

“Do folks know what they want to do? All those for admit?”

If you were asked to design the ideal international student attending Bates, you couldn’t do better than this applicant from China, and it’s little surprise that Jared Rivers, senior associate dean of admission and director of diversity enrollment, tallied a perfect 10–0–0 result after calling for a vote.

In an admission interview, the candidate revealed himself to be charismatic, outdoorsy — and “excited about thesis and Puddle Jump.” Academically stellar, the applicant, who collects paper money, wrote a book about the significance of the images on money.

(What do the committee vote tallies mean? Ten committee members voted to admit, none to put the applicant on the wait list, and none to deny.)

“He is aware of how fortunate and privileged he is.”

A teacher’s recommendation includes that comment, as well as a note that the student is eager not to “come across as arrogant or uncaring, of which he is neither.”

Weisenburger talks with the committee about students’ ability to be self-aware of their socioeconomic status at this age. Many have never experienced life outside their own family reality. “It’s all they know.” Her point? While being self-aware of one’s privilege is a mark of a liberally educated person, not all 18-year-olds are there yet.

“And he has been in touch with Coach.”

The committee considers an accomplished football player with solid grades and a demonstrated work ethic from a respected Florida high school.

While the trend in recent years at many colleges is for varsity-caliber students to apply Early Decision, quality athletes are part of the Regular Decision pool, too.

This student’s candidacy draws a key question from the committee: Would he really leave his football-crazy home state for Maine?

“It’s incredibly difficult to attract kids away from a good state flagship like the University of Florida,” says one dean. On the other hand, he took the step to be interviewed by a Bates alum in Florida, who took away a very good impression of the young man.

“And he has been in touch with Coach,” says another dean. With some hope that this student might opt to be a Bobcat instead of a Gator, the committee votes to admit.

The extracurricular activities of one candidate are thin. But a dean, showing the committee’s mastery of uncovering details affecting a candidate’s circumstances, notes that the student’s school doesn’t offer sports or an after-school activities bus.

Furthermore, the candidate’s parent has an illness requiring the student to come home immediately after school.

Meanwhile, the student’s recommendations bolster his application. He’s “curious, intelligent, inquisitive, skillful, and compassionate,” and his interest in improv and debate “will translate well to Bates,” the committee notes. The committee votes to admit.

Sarah Emerson Potter ’77 draws a laugh with this line as she arrives to observe one session. Potter, who recently retired as the college store manager, has a vast and firm understanding of Bates, and she was one of several adjunct application readers this year.

While the sessions have a certain mystique and are filled with jargon that is captivatingly opaque, like that of air traffic controllers or recording engineers, Weisenburger has been intentional about opening the process up, when possible, to campus partners and to outsiders with a vested interest.

“It’s a great learning moment,” she explains, “and an opportunity to see inside a process that touches the college in so many ways.”

This year, Weisenburger invited several college counselors who work specifically with first-generation students and/or students from underserved or underrepresented backgrounds.

Their visit provided “a chance to broaden our own outreach efforts,” she says. “It helps our team and the counselors both because we’re able to exchange ideas about how an application is reviewed in the context of how it is prepared.”

“It took me 10 minutes to get down the stairs.”

The deans often know about an applicant’s high school through school visits the prior fall, and this dean’s quip was about his visit to a huge public high school of 2,800 students — 1,000 more than Bates’ enrollment.

Besides the chance to meet students and their counselors, school visits also provide deans and counselors with clearer understanding of a student’s environment — their community and culture.

“Context is everything,” Weisenburger says.

“This is exactly what we want to see. The funnel.”

In the courtship between applicant and college, both are suitors. Students pursue colleges. A college then selects students. And then, in the spring, students who’ve been accepted to multiple schools get a chance to select a college.

This courtship is also called “the funnel” because while many thousands of students will indicate interest in receiving Bates information early in the process, the number of students in each new class will be about 500. 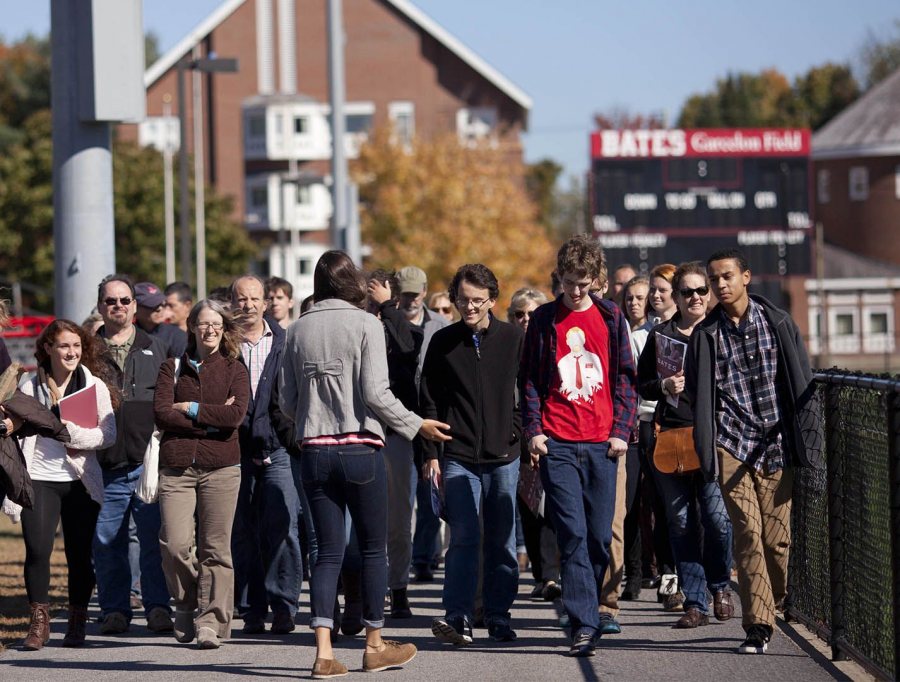 The “admission funnel” in action: prospective students follow a Bates Admission tour guide. The term “funnel” describes the key steps that prospective students take, often including a campus tour, from their first inquiry to submission of an application. (Phyllis Graber Jensen/Bates College)

This dean’s comment was about a student whose record of contact with Bates, from initial inquiry, to attending an Open House and being interviewed in the fall, to her applying, tells the committee that she’s likely to matriculate if admitted.

The personal interview remains a linchpin of the funnel. Of the regular decision pool, 707 students were interviewed on campus at Lindholm House and another 861 off campus. That’s 30 percent of the pool.

“Quite possibly the most effort I’ve ever seen on ‘Why Bates.’”

Reviewing an outstanding student’s application — English is her sixth language, she has a 4.23 weighted GPA, and was called the “most extraordinary student” in one counselor’s 18 years — a dean shares this observation.

“Why Bates” is shorthand for the Bates-focused question on the Bates Supplement to the Common Application: “What draws you to Bates?”

It’s the key opportunity for applicants to speak directly to their interest in the college. To help them along, they’re given the Mission Statement and encouraged to pull inspiration from it.

Again, the goal is to tease out a student’s genuine interest in Bates.

“Do we have a chance at yielding her?”

During a discussion of another applicant, one who will be admitted with outstanding credentials — “perfect student, every teacher’s dream,” according to one recommendation — Weisenburger asks whether there’s evidence that she would matriculate.

There’s not much to suggest she would or wouldn’t, so the committee gives the candidate an “R flag,” indicating that her choosing Bates might benefit from some recruiting, specifically contact from a Bates professor in her intended academic field.

“Only female on the wrestling team”

The odd or quirky item in an applicant’s file will catch the eye of the committee, especially if it demonstrates that the student is authentic.

One student, from a private boarding school, posted solid but unspectacular grades. Her extracurriculars, however, included being an accomplished debater, always a good thing when applying to Bates, and being the only female on the boys’ varsity wrestling team.

“I love that. That’s cool,” says one of the deans.

Some mistakes are too big to overcome. One applicant’s “disastrous” 11th grade —“too many Cs and an F” — make this candidate a long shot even with a strong counselor recommendation that spoke of an “academic rebirth” during his senior year.

On this day, his grades, coupled with a suspension for “academic dishonesty,” seal his fate, and the committee votes to deny.

After hearing strong qualifications for another candidate, Interim Director of Admission Johie Farrar Seltzer ’03 asks this question. It’s true: By slacking off in senior year, a candidate can hurt their chances for admission. This student had kept up his grades.

One candidate’s application seems to offer lots of positives in academics, sports, and music, but a dean feels that the tone of her personal essay is uneven and, specifically, seems at odds with her record of volunteerism.

In fact, the candidate’s essay seems self-serving: a description of how she lost a school election, and it draws this reaction from a dean, “Yikes,” along with an observation that the candidate’s volunteer service may not reflect an altruistic impulse. “This essay gave me a bad impression on her fit with Bates.”

The committee votes to deny.

The committee considers the personal backstories of applicants, and weighs both how those affect a student’s academic record, as reflected in their GPA, and how their response to their personal circumstances might enrich the Bates community.

This student’s application notes that one parent died a year ago, and that the other parent is not present.

He attends an uber-competitive boys school and his transcript is far from A’s and B’s. Yet the way in which he persevered through a potentially devastating personal crisis speaks volumes about who he is, the admission committee believes.

“The unevenness [in his grades] may even out in college,” says a member of the committee. “He’s more motivated than almost everyone.” They vote to admit.