Civil rights hero John Lewis to Class of ’16: ‘Get in trouble — good trouble’

When U.S. Rep. John R. Lewis was a child in Alabama, he was puzzled by the evidence that he saw around him of the South’s Jim Crow laws — segregated rest rooms, segregated movie theaters. He wanted to know why that should be.

His mother discouraged his curiosity, saying, “Don’t get in the way. Don’t get in trouble.” But, as Lewis told the audience at Bates College’s 150th Commencement on May 29, he went in the other direction instead.

Inspiriting, droll, and captivating, Lewis’ address to the Class of 2016 was the centerpiece of a Bates Commencement that also included goodbyes to two members of the class who passed away too young.

Lewis was one of four recipients of honorary degrees during the ceremony, along with best-selling author Lisa Genova ’92 (Still Alice); psychologist and renowned happiness researcher Daniel Gilbert; and Robert Witt ’62, the highly successful chancellor of the University of Alabama System.

President Clayton Spencer began her welcome with a memorial moment of silence for two members of the class, Troy Pappas and James Jhun. (Jhun, who died in January, had completed his graduation requirements and received a posthumous degree at Commencement.)

Spencer then looked back to July 1867 and Bates’ first Commencement — whose eight graduates were all men from Maine. Thanks to a self-appointed class historian, Spencer said, there is much we know about the class, such as their height, weight, and the fact that “seven parted their hair on the right side, and one parted his on the wrong side.” 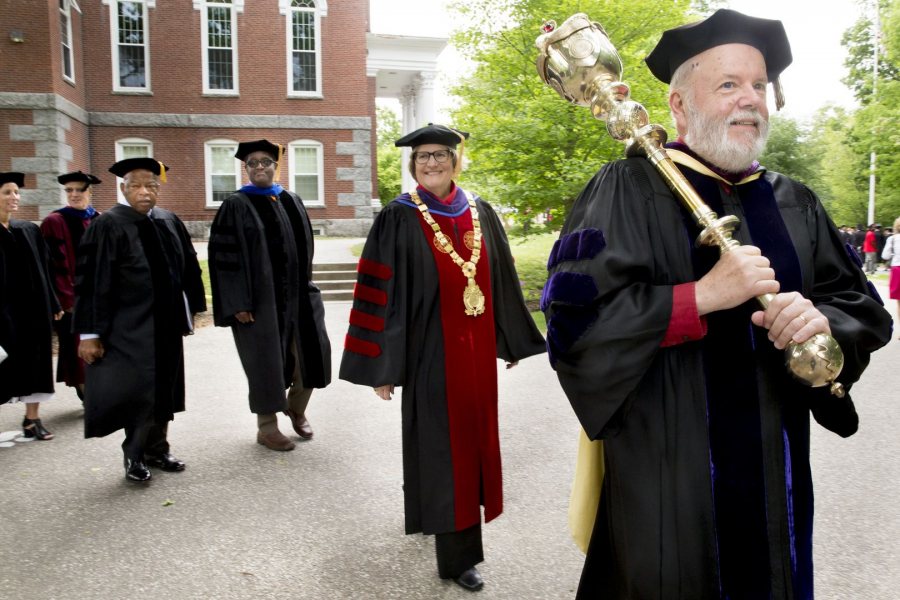 Spencer also offered information, less personal but more meaningful, of the class graduating Sunday. The 462 members of the Class of 2016 included three triple majors, 42 students who completed an honors thesis, and 18 who have won a combined 41 All-NESCAC honors while at Bates.

She noted that the class included 11 recipients of Fulbright fellowships, two Watsons (both from Alaska), and two more of the Davis Project for Peace Award.

Pointing out that the Class of 2016 began at Bates the same year she did, the president said, “What I am most proud of, beyond these impressive facts and figures, are the human qualities you embody — your creativity, your generosity, your drive for justice, your wacky humor, and your joy in, and caring for, one another.” 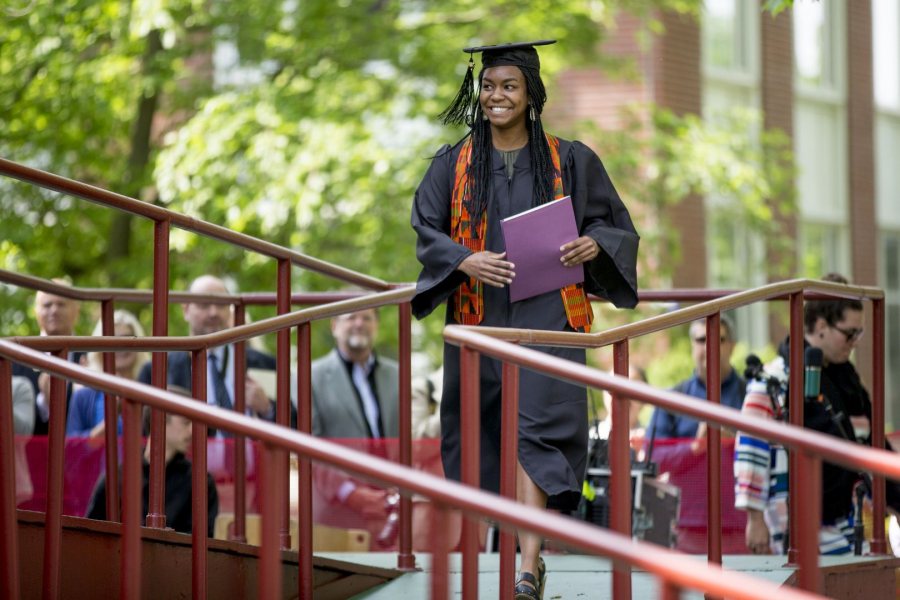 A dynamic speaker, Lewis dedicated most of his time to autobiographical episodes intended as inspiration and exhortation for the Bates students. But he began by recognizing the role of a founding father of the modern civil rights movement — the Rev. Benjamin E. Mays, Class of 1920 — and Bates’ role in shaping that civil rights theorist and King mentor.

“I feel more than honored, I feel more than lucky, I feel blessed to be standing here on this campus to speak to you, the graduates, where a man by the name of Benjamin Mays once stood,” Lewis said. “Many, many years ago I got to know Dr. Mays. He was part of my inspiration, he was my friend, my leader.”

Lewis cited Mays’ statement that Bates did not emancipate him, but instead enabled him to emancipate himself. “This is the great power of education, and Dr. Benjmain Mays is a shining example,” Lewis said. “I want to thank Bates College for what you did, and continue to do, to free and liberate humankind.” 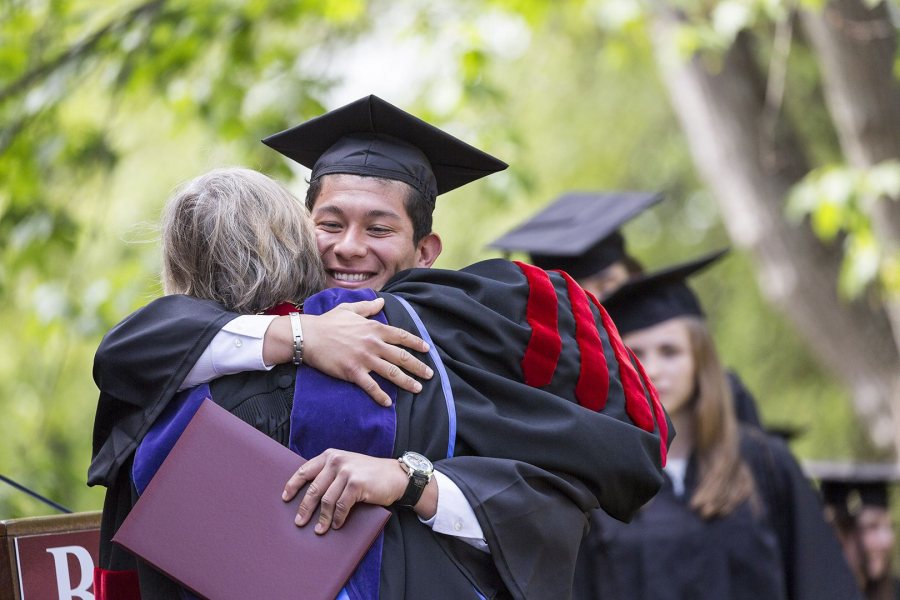 Typical of Lewis’ humor was the story he told about raising chickens on his parents’ farm in Alabama. Wanting to be a minister, he’d preach to the birds in the chicken yard while his siblings and cousins watched.

Recounting his first meeting with King, Lewis said that the great civil rights leader “inspired me to stand up, to speak up, and speak out. And I got in the way, I got in trouble — good trouble, necessary trouble.” 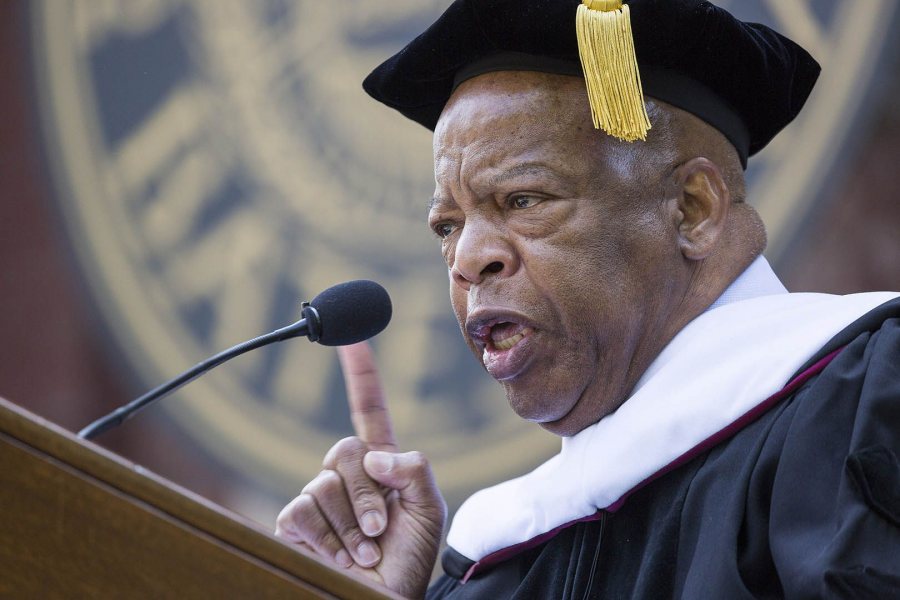 So, he told the graduates, “You must find a way to get in the way and get in good trouble, necessary trouble. … You have a moral obligation, a mission and a mandate, when you leave here, to go out and seek justice for all. You can do it. You must do it.”

Senior speaker Shannon L. Griffin of Philadelphia devoted her talk to the power of questions and the power of the Bates community.

“Bates has allowed me to develop the courage to ask questions,” Griffin said — “to continuously engage with the unfamiliar, the uncomfortable, and to challenge my convictions.” 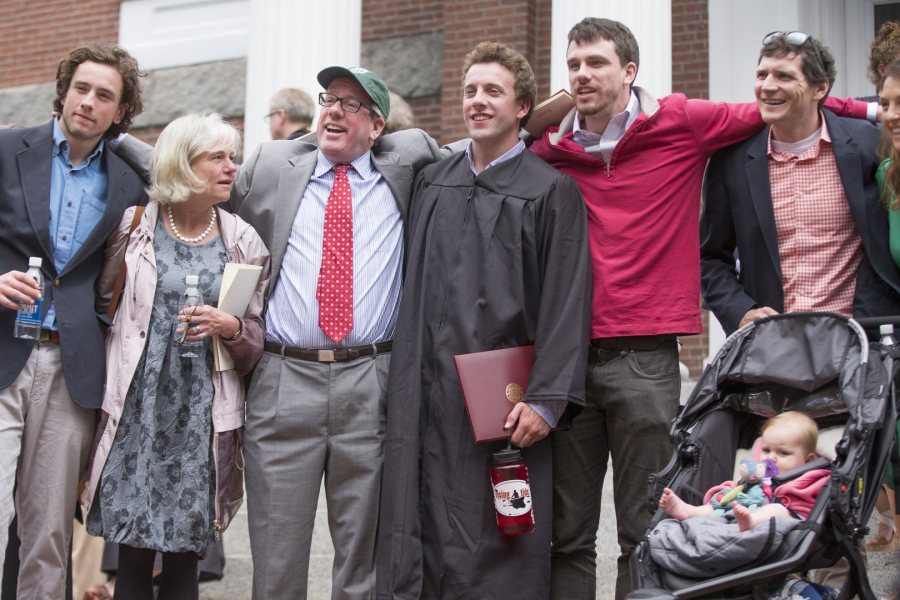 William Cleaves ’16 gathers with members of his family, including cousin John McDevitt ’04 (far right) and his daughter, Norah, 7 months, for a post-Commencement photograph on the steps of Hathorn Hall. (Phyllis Graber Jensen/Bates College)

When she was younger, “I stopped asking questions out of fear of being perceived as incompetent. It had terrible consequences, such as me confusing Nair hair remover for body lotion, because I was too stubborn to ask. That day I lost every piece of hair on my body.

“You would think that not having eyebrows would have compelled me to start asking questions again. Only Bates was transformative enough to restore my desire to question.”

“I have never met a community that is so loving and inspiring,” she said. “Curiosity is innate in all of us, but it is the support of the community that ignites the courage in us to believe in, feel, and see our potential and to dare to pursue it.”

“There is a common occurrence in our classes,” she said, “where professors pose questions that spur us to gaze into the deep crevices of our capabilities and fears. In a history seminar, professor Hilmar Jensen once asked, ‘Would you, as a Northern college student, travel to the south during the Freedom Summer of ’64?’ 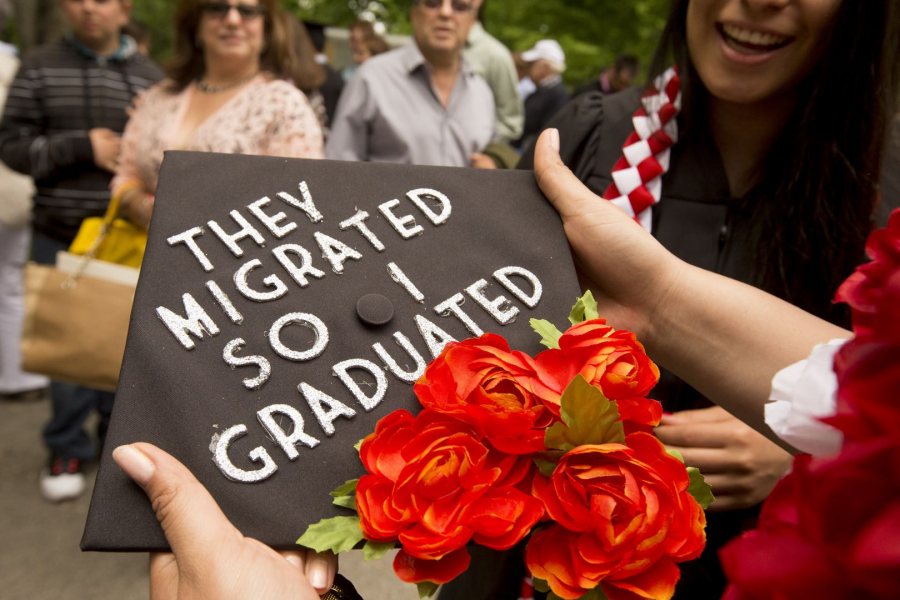 “Our class left that evening, pondering what would we do for others. Would we be brave enough to speak up in the face of injustice? Congressman John Lewis, an American hero and civil rights leader, is here today as I continue to reflect on that question.

“That is the power and magnitude of a Bates education.”

Prior to the closing benediction from Multifaith Chaplain Brittany Longsdorf, the ceremony featured a welcome to the Bates Alumni Association from Michael Lieber ’92. “Visit often,” he told the graduates. “You’re always welcome home.”

The Commencement Choir, directed by Lecturer in Music John Corrie, sang Stephen Paulus’ “The Road Home”; and class gift co-chairs Rebecca C. Dobbin of New Canaan, Conn., and Katherine M. Kaplan of Boston, announced that the Class of 2016 had donated $8,456 to the college.

Three hundred and forty-nine students, or 76 percent of the class, contributed to the gift — beating the participation goal by six percentage points.