Civil rights icon John Lewis’ Commencement address was widely covered by the news media, with considerable focus on Lewis’ message and his deep appreciation for another civil rights icon, the late Benjamin Mays ’20.

The Huffington Post’s Taryn Finley wrote that Lewis’ speech delivered a “stirring message about making change in the world by getting into trouble.“

Lewis, a Georgia congressman, told the grads that “you must find a way to get in the way and get in good trouble, necessary trouble. To save this little piece of real estate that we call earth for generations yet unborn.”

Portland Press Herald reporter Beth Quimby began her story by saying that Lewis “recalled the impact of a Bates College graduate on his own life and urged those graduating in 2016 to serve humanity.”

Quimby described Mays as “a preacher, civil rights activist, president of Morehouse College in Atlanta and mentor to both Martin Luther King Jr. and Lewis.”

Quimby quoted Lewis saying that he heard Mays “speak about Bates College many, many times…. It was Bates College that gave him the tools to become emancipated.” The congressman added that “if it hadn’t been for Dr. Mays, I am not sure there would have been a Dr. Martin Luther King Jr.”

Maine Public Broadcasting reporter Jennifer Mitchell said that Lewis highlighted “the far-reaching effect that colleges such as Bates have played in progressing civil rights in America.”

Mitchell reported that Lewis told the grads that “you must stand up. You have a moral obligation to speak up and speak out, when you see something that is not right, not fair, not just. You move your feet.”

President Clayton Spencer was the guest on NECN’s CEO Corner show on May 29, and she highlighted Bates history and current initiatives.

“Bates is the leading institution in New England that figured out that diversity, inclusion, rigorous academics for all human beings are the key to the American dream and to success in life and work — and we figured it out in the mid-19th century,” Spencer said.

Principles of “inclusion, equality, equity, and access to education [are] deep in our identity,” she said. By the late 1960s, “the Ivy league caught up with us, and Williams and Amherst caught up with us but we were there 100 years earlier.”

Today, a liberal arts education is “not only relevant but a business imperative,” Spencer said.

“We live in a knowledge-based, creativity-driven economy” and what employers are saying is they want students who can “think critically, creatively, collaboratively.”

She talked about Purposeful Work, “a powerful value proposition in the contemporary world and contemporary economy” and the college’s new Program in Digital and Computational Studies, far more than a typical “computer science major bolted onto a math department as a sideline.”

Instead, the Bates DCS program is “perfectly designed for the age we are in.”

The Letters and Politics podcast from radio station KPFA featured Stephen Engel, associate professor of politics, who talked about his book Fragmented Citizens: The Changing Landscape of Gay and Lesbian Lives.

Engel addressed the “interesting moment” for LGBTQ rights in the U.S. where expansion, such as the 2015 Supreme Court ruling on same-sex marriage, is matched by infringement, such as HB2 in North Carolina.

Stephen Engel on the KPFA podcast Letters and Politics, on June 9, 2016:

Engel says that we tend to view this dynamic “of a win followed by a loss” as typical of social movements, a push followed by a backlash.”

However, he says, “we’re also seeing how political change in the U.S. is always partial.”

It’s a key idea that animates Engels’ book, that when a law is changed “in one domain, it will raise to the surface tensions with law and policy in other domains,” he explains.

In Pennsylvania, among other states, a gay couple “could essentially be married on Sunday, and potentially fired on Monday” for being gay.

The Supreme Court’s 2015 ruling has “exacerbated that tension.”

While laws related to marriage have been altered, “these changes have only highlighted new tensions, because there have not been corresponding changes in either employment law in one domain, or in public accommodations, to name another.”

The Sun Journal covered the Manic Optimists’ appearance on Sing That Thing, a televised singing competition produced by WGBH in Boston.

“As their name implies, the Manic Optimists are all about fun,” wrote Cindy Larock ’75, “and recently that flair for fun has earned them fame well beyond the borders of the campus at Bates College.”

Dan Murphy ’18 of Lexington, Mass., captured the group’s camaraderie when he told Larock that “it’s easy to do well when you love what you do and you love who you’re with.”

Founded about a decade ago as a sketch comedy group before making the move to a cappella, the Man Ops appeared twice, on Episode 3 (featuring interviews with the group) and on Episode 7, the semifinal round, won by Doo Wop Shop of the University of Massachusetts–Amherst.

Taped in January, the shows ran in April and May on public television stations in New England.

The Manic Optimists’ first Sing That Thing performance is below. Note that this performance features the late James Jhun ’16 (at right, singing lead), who died in late January and received his degree posthumously at Commencement in May.

Discoverer of a new mechanism for wound healing — Science Daily 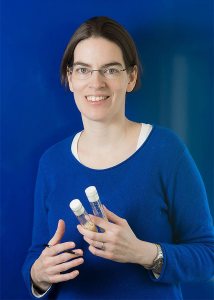 Wound healing typically involves growing more cells, through cell division. But Losick has identified another response to injury or disease: the growth of cell size. She calls this phenomenon “wound-induced polyploidy.”

The capacity of cells to grow in size “has been known for some time,” says Science Daily. “But what wasn’t previously known is that these cells are a mechanism to respond to injury.”

Losick says that “our findings suggest that the cellular damage caused by cell loss or wounding leads to different mechanisms of tissue repair — cell proliferation or cell growth — depending on context.

“Now that we have discovered that WIP is a widely used part of the body’s healing arsenal, we can look for genes or drugs that promote healing by boosting the body’s ability to generate these extra-large cells.”

Losick’s research, co-authored with researcher Albert Jun of the Wilmer Eye Institute at Johns Hopkins Medical School, has been published in PLOS ONE.

At Bates, Losick did an honors thesis in biochemistry, investigating the hepatitis A virus under Dana Professor of Chemistry Glen Lawson.

Keep Me Current reports that Elly Bengtsson ’19 is the co-organizer of a citizen initiative to ban carry-out plastic bags in her hometown of Freeport, Maine.

The question will be on the June 14 ballot in Freeport, according to Keep Me Current reporter Larry Grard, and a ban would make the town “the first in Cumberland County to ban plastic shopping bags in stores whose sales are more than 2 percent in food.”

Bengtsson and a friend, Meredith Broderick, were Freeport High School seniors when they proposed the ban to the town council. Broderick now attends Elon University.

At a May 17 council meeting, Bengtsson said that “micro-plastics never leave the environment. One hundred twenty-five towns in the U.S. have bans or fees on plastic bags. All of Hawaii has it. York just banned them. We know that we have a lot of support from Freeport citizens.”