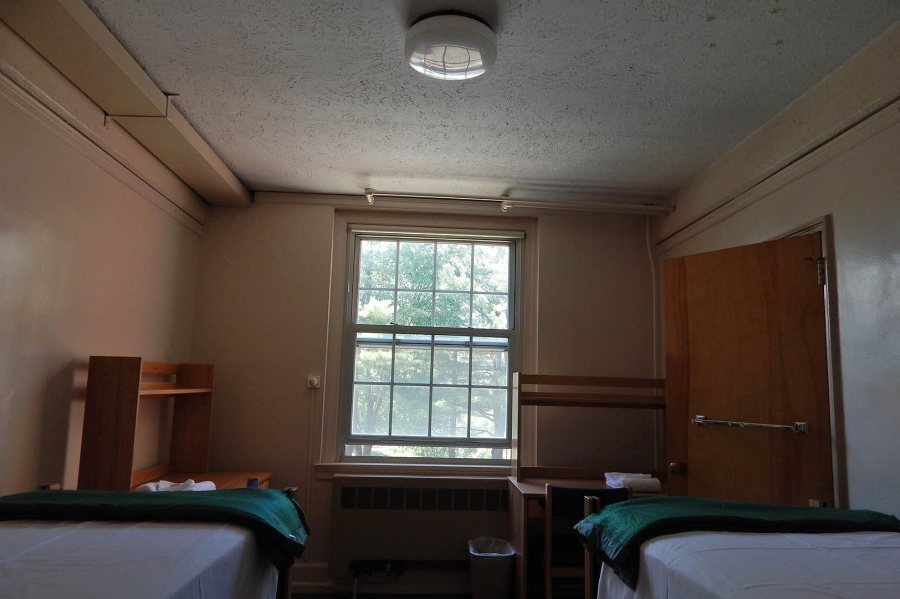 A quad in Smith awaits Reunion revelers from the Class of ’11. (Doug Hubley/Bates College)

During a tour of Smith and Adams halls this week, project manager Paul Farnsworth showed us one of Smith’s legendary quad suites, all made up for Reunion guests: crisp clean sheets and pillowcases, green blankets folded neatly on the beds.

It was the calm before a minor storm — not Reunion, which will bring 122 members of the Class of 2011 and their guests to Smith, but the start of renovations in a dorm built in 1940 and last refurbished 30 years ago. 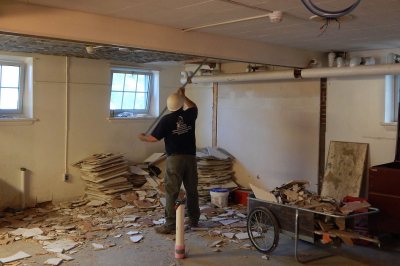 A worker scrapes tiles off the ceiling in the basement of Smith Hall on June 8, 2016. (Doug Hubley/Bates College)

As reported previously, the big news is the repurposing of the residence rooms from quads to doubles, and the consequent halving of student beds from 192 to 96. This “de-densification” itself is largely a matter of removing furniture and moving electrical outlets, but the residential spaces will also see new paint, ceiling and floor coverings, and alarm technology. And bathrooms will get new fixtures — love those undermount sinks! — in addition to surface finishes.

At the same time, substantial reworking of the Smith basement will modernize amenities and building systems including the heating plant; admit more daylight; and give the basement a better ambiance for both leisure and study. 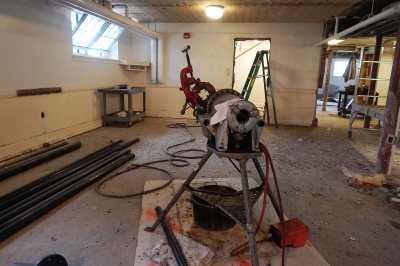 A game and lounge area will go into this basement space in Smith Hall, shown on June 8, 2016. The device at center is a pipe cutter. (Doug Hubley/Bates College)

Preliminaries on the project, which also includes upsprucing (new word! Feel free to use it!) of Wentworth Adams Hall next door, began during Short Term in Smith’s basement and above ground in the North Tower.

The subterranean progress has been dramatic. Walls have been torn out, strips of concrete floor gouged out and replaced to accommodate the relocation of plumbing, and wall incisions made where window openings will be enlarged. The old kitchen, lounge, laundry room, residential rooms, and bathrooms have been removed and the space is largely open, reflecting its future configuration.

A yoga-contemplation room and the residence coordinator’s quarters will share the south end of the basement, nearest to Alumni Walk. The RC’s digs are likely to be “highly desirable,” as Farnsworth put it, with a full bathroom and four windows along two walls. 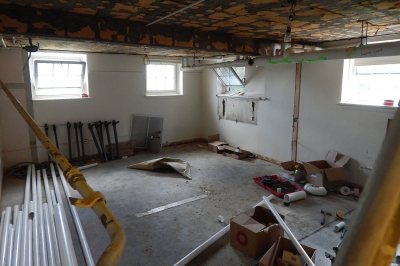 Shown on June 8, 2016, this space in the basement of Smith Hall will become the residence coordinator’s apartment. (Doug Hubley/Bates College)

The rest of the basement will be common spaces, including a quiet area with comfy seating and a big table, and an open expanse with a kitchen along one wall and a game room along the other. Laundry facilities will move to the north end, near a rebuilt building entrance.

We doubt that the project designers took any stylistic cues from parking-garage décor. But in the basement of Smith, with its three similar stairwells, they are replicating something that you often see while searching the garage for your car. Just as each floor in a parking garage has its own signature paint color, so will each basement stairwell in Smith have a distinctive color as well. 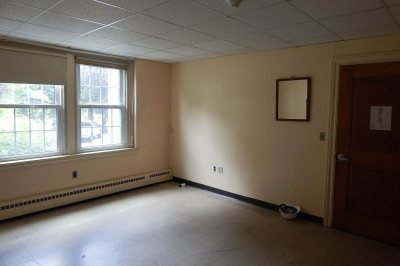 After a makeover starting June 13, this suite will be the apartment of the residence director in Wentworth Adams Hall. (Doug Hubley/Bates College)

Changes to Adams will be concentrated on the first two floors. On the second floor, accessed by the main entrance on North Bardwell Street, Farnsworth showed us a two-room suite originally designed, in the mid-1960s, as quarters for the house mother.

After a renovation, the suite will resume a similar role as the apartment for the residence director. Already a bright space with a nice view, it will be downright charming by the time the residence director is installed. The remake will include the addition of a kitchenette, and a rebuild of the bathroom to make it ADA-compliant. 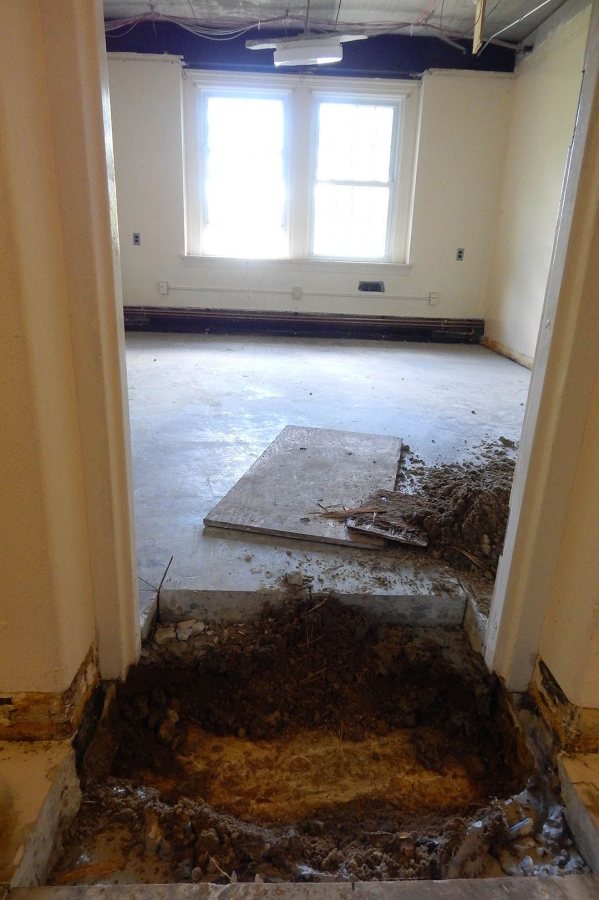 Downstairs, on the North Bardwell Street side, Farnsworth took us through three adjacent bedrooms that will be connected by new wall openings to form a large first-year study center. Glass inserts in the doors will help brighten the study center — and, as Farnsworth pointed out, will allow students to reconnoiter before entering.

“You want people to be able to make the decision before they commit to going in,” he explains. We can relate.

Nearby, providing evidence of what’s to come, a little pit had been dug down below ground level where the threshold of Room 118 used to be. The room will become a new building entrance opening onto the lawn overlooking Lake Andrews. With nearly 10 feet of corridor wall removed (and a load-bearing column inserted), Room 118 will become a spacious entryway admitting plenty of daylight through the double glass-and-aluminum doors.

And with Reunion a memory by Monday, June 13, Portland-based general contractor Langford and Low (warning: mixed sports metaphor!) will kick off a full-court press in both dorms.

Post haste: Meanwhile, nearly nine miles away from campus, in leafy Greene on the banks of the Androscoggin, Bates’ new boathouse is shaping up fast. 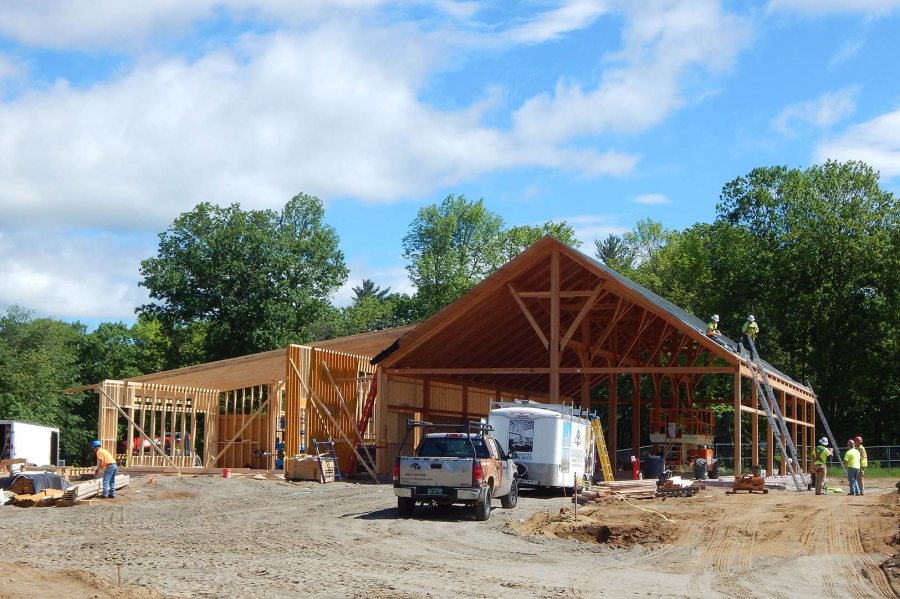 The new boathouse under construction on June 8, 2016. (Doug Hubley/Bates College)

The structure consists of two main components: a one-story section of conventional wooden construction that will house locker rooms, a workshop, and team room, and the boathouse itself, a lofty post-and-beam structure whose robust frame, completed June 3, is nothing but gorgeous. 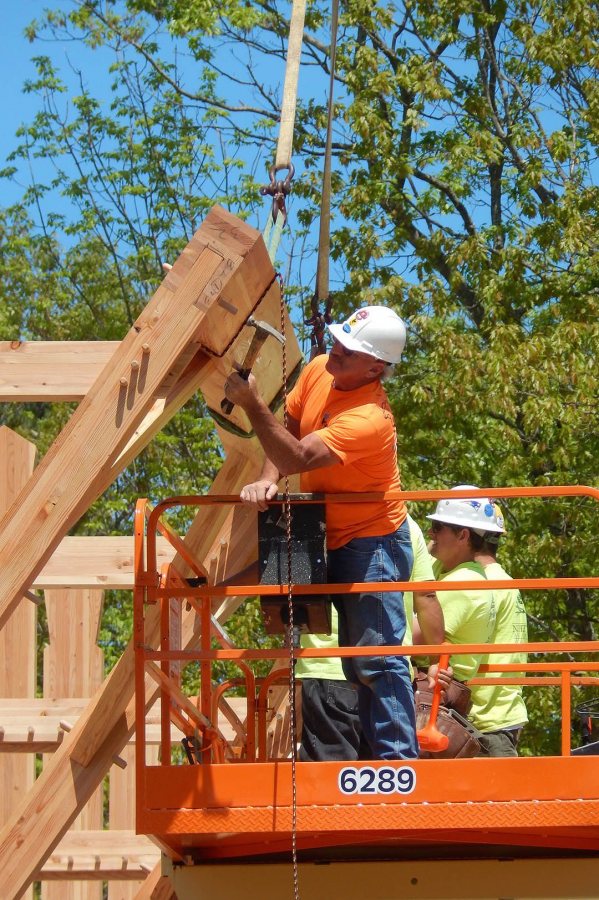 A timber framer for South County Post & Beam drives in a peg on the boathouse on May 26, 2016. (Doug Hubley/Bates College)

Finishing the framing “was a big milestone because now a lot of other activities can start,” said Henry Gillert, Bates’ project manager for the boathouse. “The fact that we made it on schedule is pretty important.”

South County Post and Beam of Kingston, R.I., was just beginning that load-bearing skeleton nearly a month ago. The firm moved then placed the roof decking and a temporary weatherproof membrane, and now, with that job essentially complete, South County is outward bound. The firm that has been building the single-story annex, R.S. Egenstafer Construction of Littleton, Maine, will also frame and sheath the boathouse walls.

Lewiston-based Hahnel Bros. Co., a custom-roofing firm that does a lot of work for Bates, will apply permanent roof coverings. “I’ve worked with them for 25 years and they’ve always done a great job,” Gillert says.

Hahnel will also do the roof of the annex, covering it with a durable rubber-like sheet. 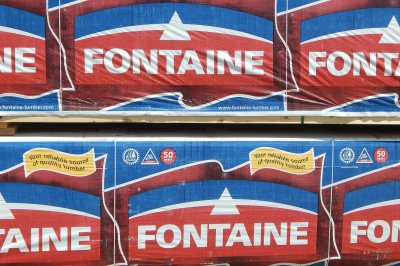 Fontaine, I presume! Lumber stockpiled at the boathouse construction site on May 26, 2016. (Doug Hubley/Bates College)

Lead contractor Consigli Construction has “two goals right now,” Gillert says. As is typical for building a building, the first goal “is to get the building watertight as soon as possible, so you can do more work inside it no matter what the weather’s like,” he says.

Hence the second goal, which is to get cracking on weather-sensitive interior work such as wall-building, wiring, and plumbing. 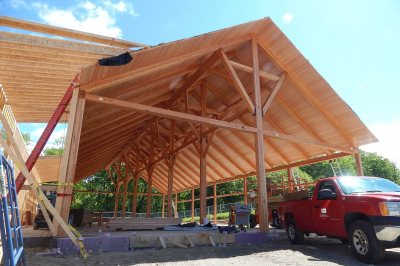 The boat storage area of Bates’ new boathouse, shown on June 8, 2016. Wall framing is about to begin. (Doug Hubley/Bates College)

All of which means, of course, that the quantities of trades, subcontractors, and workers on site are increasing. “They’re really picking up the pace now,” says Gillert, who estimates that there will soon be as many as 20 workers on site.

In addition to Egenstafer, “subs” that are in place, or soon will be, include two Portland companies, Titan Mechanical, which is doing the plumbing, and Mancini Electric. 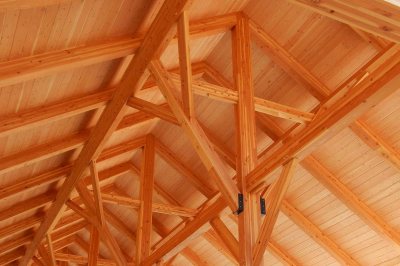 What will happen to the old boathouse, a few hundred feet away from the new one? After a rowing camp based there winds up in the second week of July, Gillert will have the racing shells stored in Merrill Gym and other rowing equipment moved to a storage trailer.

Then the exterior wood will be stripped from the old boathouse and sent to a millwork company to be planed and cut to uniform dimensions for use in the new boathouse. And what’s left of the old house will be knocked down. 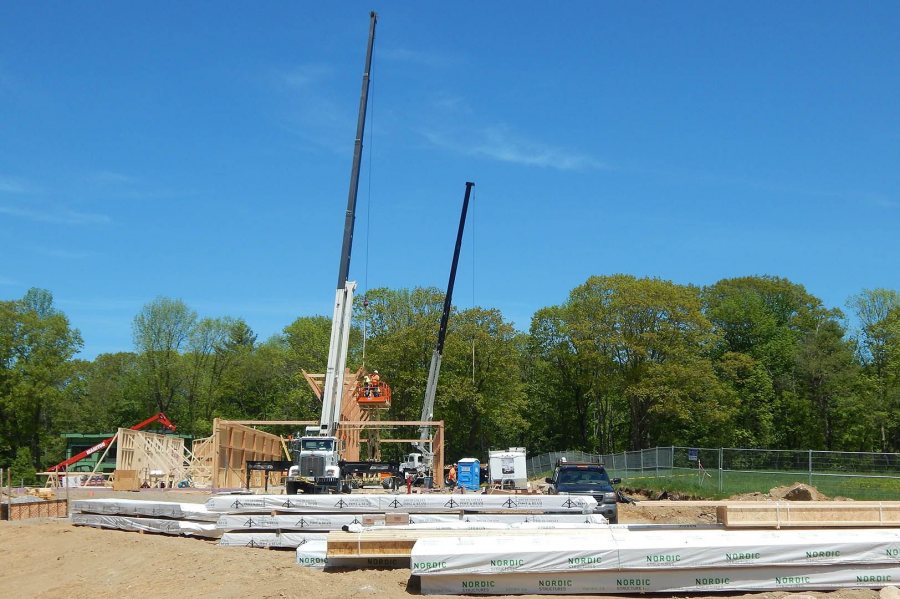