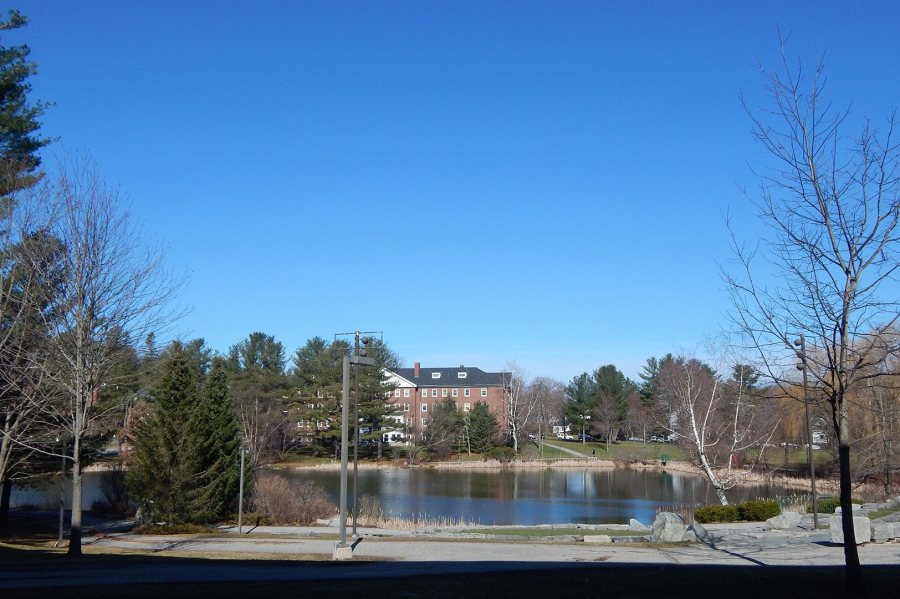 Even as finishing touches are applied to the new residences at 55 and 65 Campus Ave. this summer, a whole new component of the Campus Life Project will come to life — at the opposite side of campus, a third of a mile away. 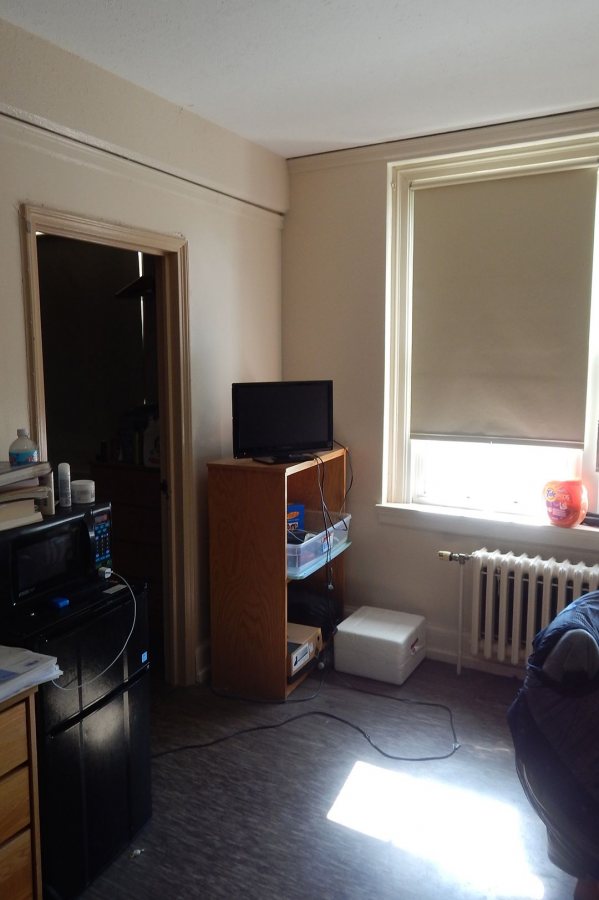 The doorway leads to the four-bunk bedroom in a typical Smith Hall suite. A renovation project in summer 2016 will convert Smith from quads to doubles. (Doug Hubley/Bates College)

Short Term will see the start of significant renovations to Smith and Wentworth Adams halls. And the biggest news involves Smith.

Currently sleeping most of its inhabitants in quads — that is, four beds in a two-room suite — the residence will be converted to doubles. This “de-densification” will halve the student population in Smith’s above-ground floors, from 192 to 96 beds, with the other 96 coming back as part of the new Campus Avenue residences.

It’s a “back to the future” kind of deal, as Smith comprised doubles when it opened, in 1940. Adopted 15 years ago, the quads imposed an intimacy that, at its best, has “encouraged a tight-knit community,” says Erin Foster Zsiga, head of Bates’ residence-life program.

“Many first-year roommates have gone on to be roommates for all four years, and friends beyond Bates,” she says. “An alumnus came back last summer to propose to his fiancée in his former Smith room.” 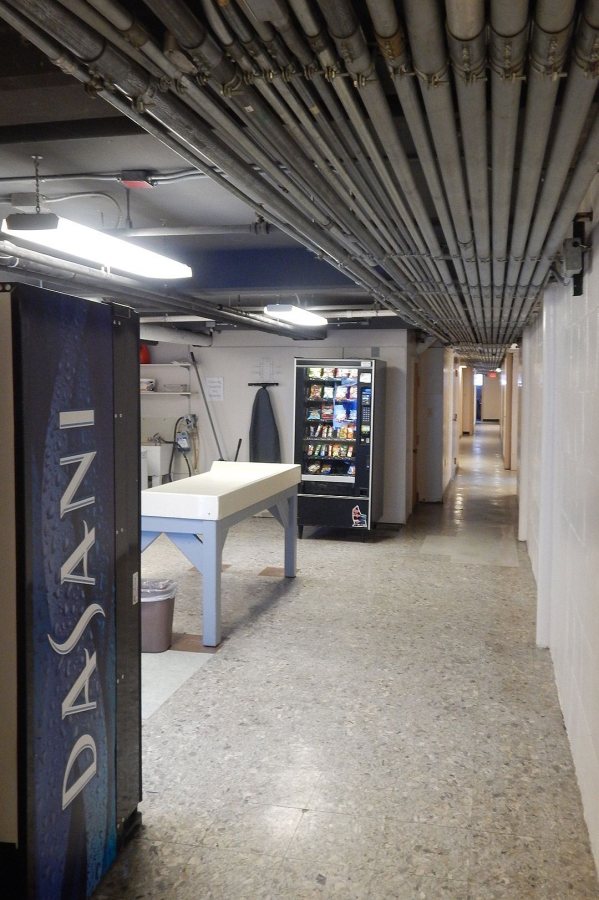 Nevertheless, it’s a timely change. The converted suites are going to be “desirable spaces,” says Paul Farnsworth, Facility Services’ project manager for the Smith-Adams work. “Just cutting the population in half is going to make a huge difference.”

Another focus of the Smith work involves the basement. To make that rather claustrophobic space feel more, er, spacious, soil outside the foundation will be cut back on the Lake Andrews side of the building and the windows enlarged downward to admit more daylight.

The 15 student beds now situated there will be removed, and the area will be refitted for study and recreation: progressing from quiet to animated, the basement will house study rooms, a lounge, a game room, and an open-plan kitchen, as well as new restrooms and a relocated laundry. Also in store are a room for meditation or individual yoga, and new quarters for a residence coordinator. 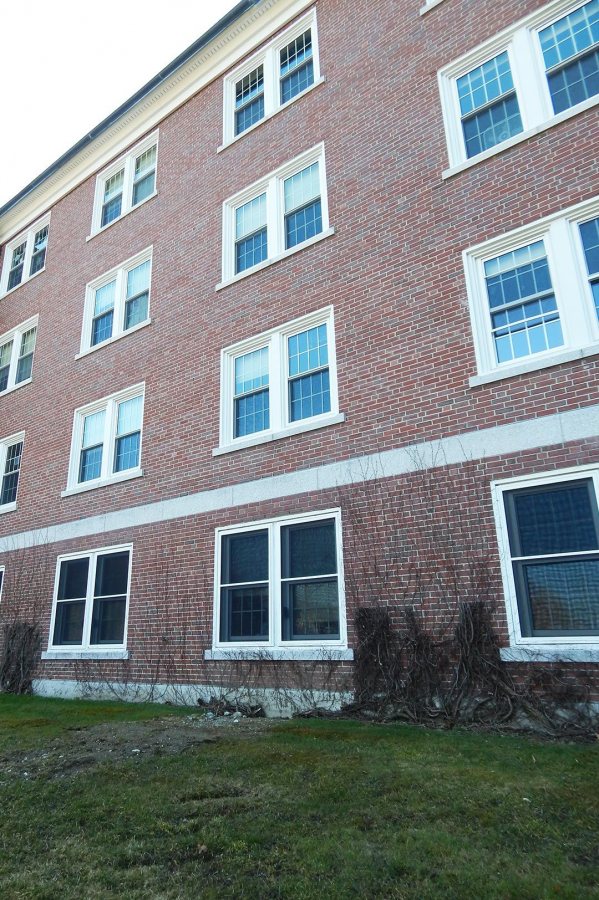 The ground floor windows at center, near the bald spot in the lawn, indicate where a new entrance into Wentworth Adams Hall will be constructed this summer. (Doug Hubley/Bates College)

Also driving the renovations in both residences, says Farnsworth, is the need to address deferred maintenance. In Smith, which was last renovated in 1986, that entails:

Common spaces will get nice new furniture. And finally, the bathrooms will receive new sinks and counters, among other improvements — including the provision of a drain for every shower stall. Now, every two stalls share a drain, forcing students in neighboring stalls to stand in each other’s runoff. Civilization at last. 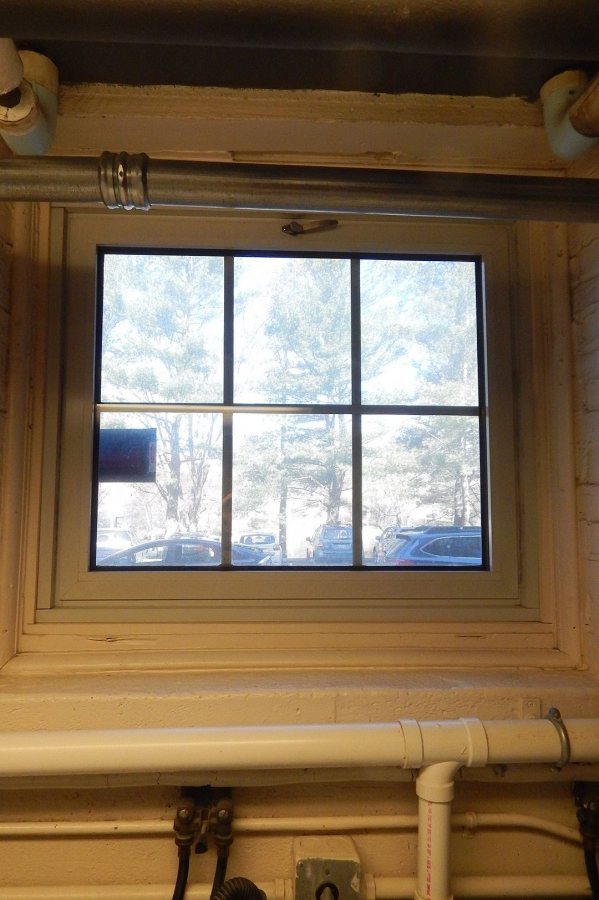 More daylight will brighten Smith Hall’s ground floor after the window openings are enlarged — down to about the level of the outlet — during a summer 2016 renovation. (Doug Hubley/Bates College)

Next door at Wentworth Adams, forthcoming improvements include the creation of a new entrance on the Lake Andrews side of the building. It means the sacrifice of a student room (No. 118, if there’s any history there you’d like to share), but the aesthetic gain will be considerable.

“The grass behind the building is just prime real estate for gatherings, but it’s so far from the existing entrances that it just doesn’t work,” Farnsworth says. “So there’ll be an entrance and a path toward Pettengill.”

While the first-years are leaving Smith, a new first-year center — clustered accommodations for first-years and a junior adviser — will be created on the ground floor of Adams. One story up, a new suite will be created for a residence director, a paid staffer who coordinates student life programming across residences.

Opening off the elegant oak vestibule at Adams’ main entrance and incorporating a kitchenette and full bath in addition to sleeping quarters, that suite will occupy space once inhabited by the Wentworth Adams house mothers.

Described as a summer project, the Smith–Wentworth Adams work will start up incrementally as residential use winds down during the spring. Both buildings will have occupants right through Reunion.

Work at Smith will begin during Short Term and then, following Reunion, general contractor Langford and Low, of Portland, can really pour on the coals.

Can we talk? Campus Construction Update welcomes queries and comments about current, past, and future construction at Bates. Write to dhubley@bates.edu, putting “Campus Construction” or “Drain-sharing horror stories” in the subject line. Or use the comments system below. 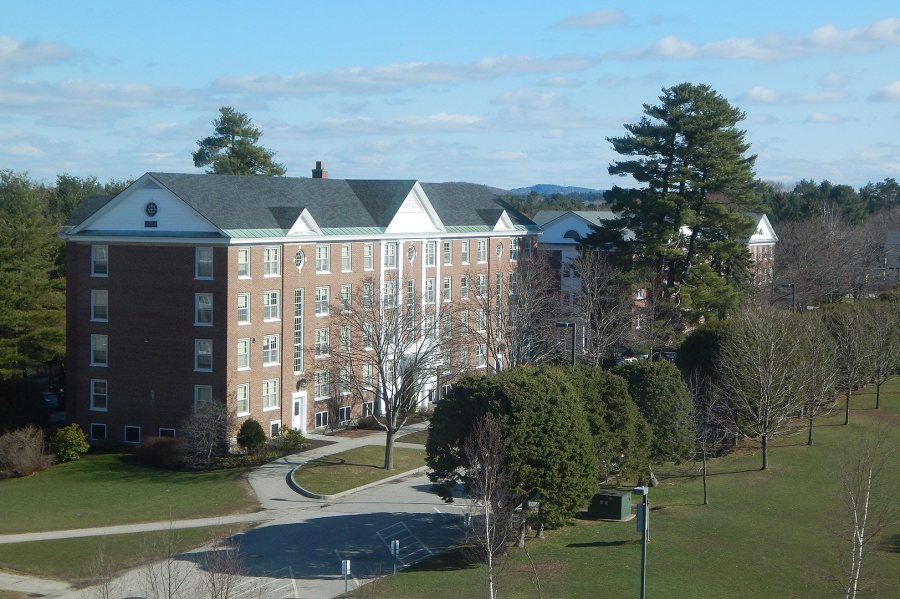