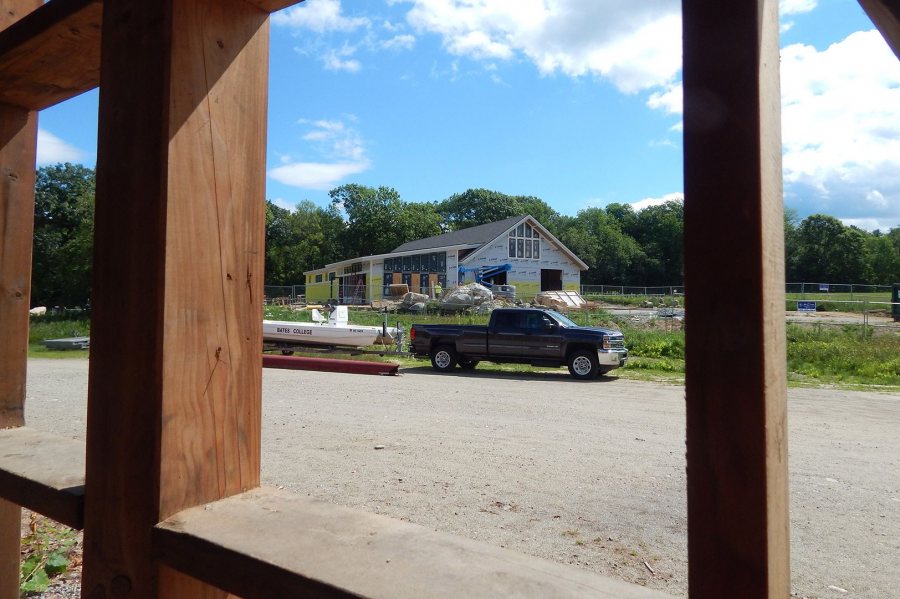 As Bates’ new varsity rowing boathouse comes closer and closer to completion, the old boathouse comes closer and closer to vanishing. When we visited on July 19, the barn-like space was all but empty, with just a few wooden boat racks remaining and barely enough debris on the ground to catch our interest. The boats are stored on campus in Underhill Arena and the rowing teams’ other gear is stashed in a storage unit on the construction site. 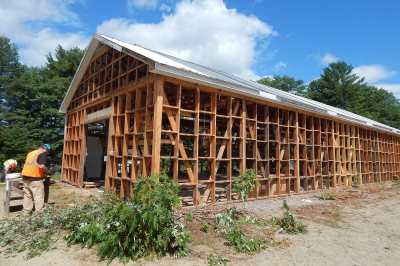 The roof looked more or less intact, but the walls have been reduced to bare framing. The planks that once covered them have been sent to East Coast Millwork of Boothbay, Maine, for resurfacing and sizing, after which they’ll be re-used to finish walls inside the new boathouse.

It’s nice to know that something of the 1988 boathouse will live on in the 2016 edition.

And on July 28, what’s left of the old house “will just get knocked down, chopped up, and hauled away,” explains project manager Henry Gillert.

Uphill from the old boathouse and a bit further from the Androscoggin River sits the new boathouse. Thanks to Hahnel Brothers Co., of Lewiston, the roof was finished the second week of July. Hahnel put asphalt shingles on the boathouse proper and a heavy rubber-like membrane on the adjoining annex, which will contain lockers, showers, and the team room — all amenities the old house lacked. 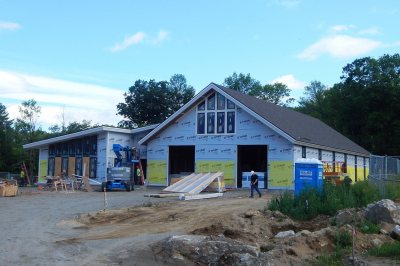 Most windows are in place on both sections, including clustered units on the team room that face east toward the river and pointy ones up near the gables that cast a dramatic light into the boat-storage space.

The plywood walls have been coated with Typar breathable weather-protection membrane. (It’s a building product that, like the similar Tyvek, is likely named for a prominent figure in the Vulcan High Command. “May your building envelope live long and enable you to prosper.”)

And with the Typar in place, carpenters for R.S. Egenstafer Construction, based in the Aroostook County town of Littleton, Maine, will sheath the building with stained wooden shingles and garnet-painted clapboards.

Inside the boathouse, the installation of wallboard and insulation is well underway, accompanied by mechanical-electrical rough-ins — that is, the running of infrastructure like pipes and wires into a space without making final hookups. The walls can be closed up when those rough-ins have had their municipal inspection. 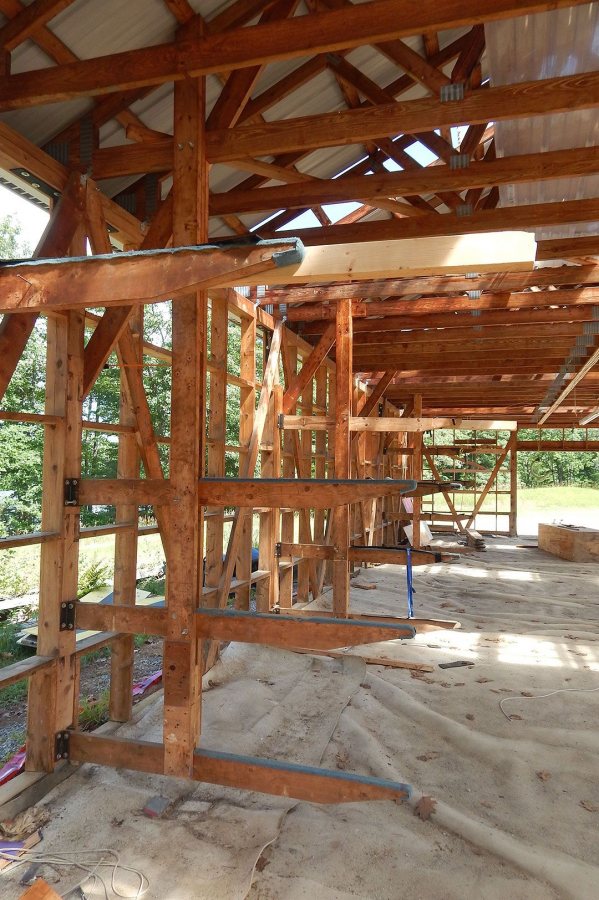 Topped with worn blue padding, the wooden boat racks were still in place in Bates’ 1988 boathouse on July 19, 2016, about a week before its scheduled demolition. (Doug Hubley/Bates College)

All in all, Gillert says, “it’s really progressing very smoothly.”

“That’s a very, very big deal,” says Gillert. Proper boat storage is a focus of concern for the rowing coach Peter Steenstra and his teams, as the lightly built vessels are quite vulnerable to damage. Dings that puncture a boat’s skin can admit moisture that will cause the hull to deteriorate.

The old racks were essentially padded pieces of wood mounted perpendicular to the boathouse walls. (There were also some padded hook-like boat cradles that hung from the ceiling on ropes. Steenstra has pointed out that the old house ended up storing three times as many boats as it was designed for.)

The Focus racks, instead, will have telescoping arms that function like drawers, making boat handling easier on both vessels and rowers. As one of the final stages of the boathouse construction, Focus will install the racks during the third week of August.

In other news from the Androscoggin’s shady banks, the project team has decided the fate of the boulders that surprised everyone when they turned up during foundation work. The big rocks will be broken up and hauled away. 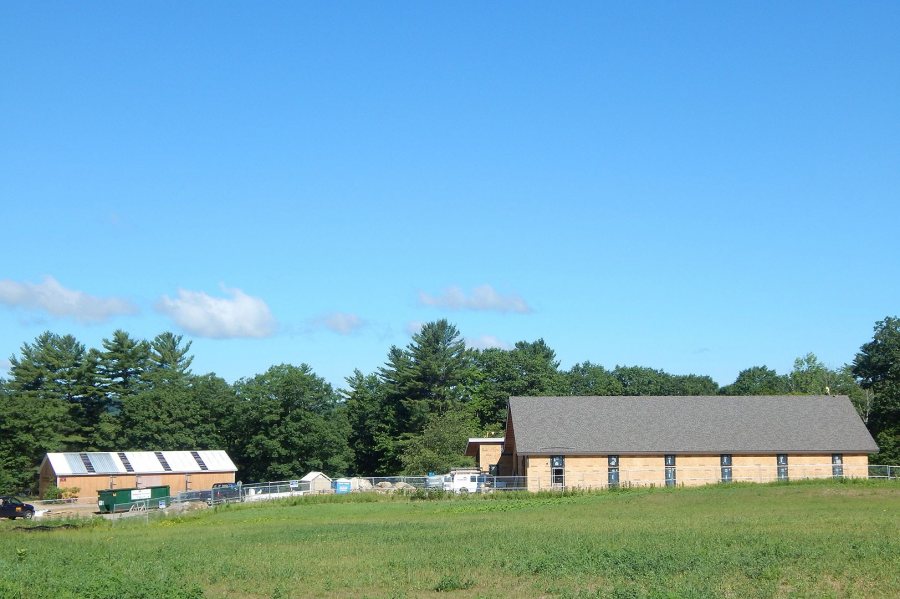 The 1988 Bates boathouse, at left, and the new facility, pictured on July 11, 2016. The Androscoggin River is behind the trees. (Doug Hubley/Bates College)

Turf’s up: The summer’s other major athletics construction project, the replacement of artificial turf at Campus Avenue Field, was on hiatus earlier this week.

Workers finished grading the stone base for the new state-of-of-art GreenFields TX turf in mid-July. But the placement of the shock-absorbing TenCate Ecocept layer, which will underlie the grassy-looking playing surface, was delayed until specialized equipment could be delivered here from a job in Texas.

That gear has arrived and work was expected to begin today, July 22. 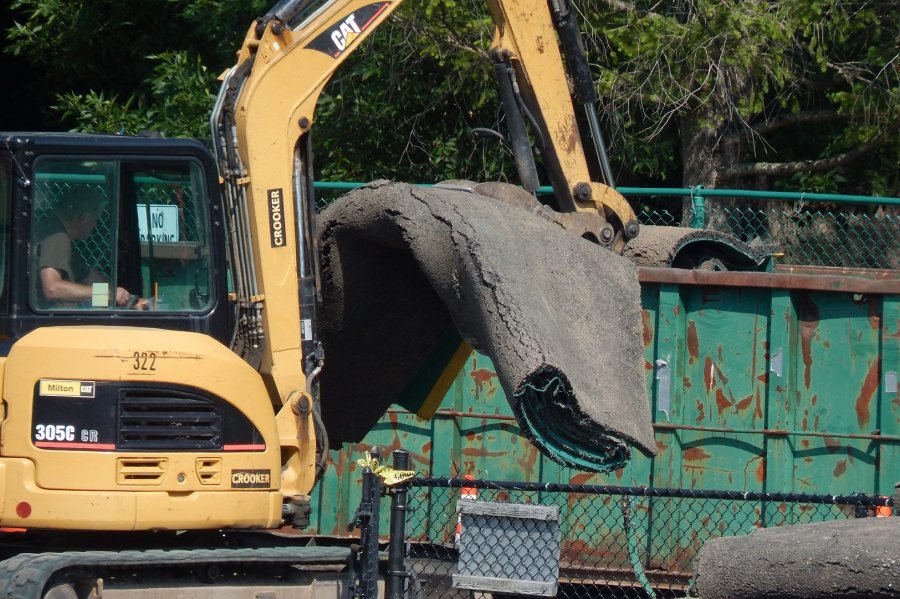 A Crooker Construction excavator handles rolls of AstroTurf that have been removed from Campus Avenue Field. GreenFields TX will replace the 16-year-old AstroTurf. (Doug Hubley/Bates College)

Nevertheless, the renovation of the Bates field hockey team’s home field is expected to be complete by Aug. 3. 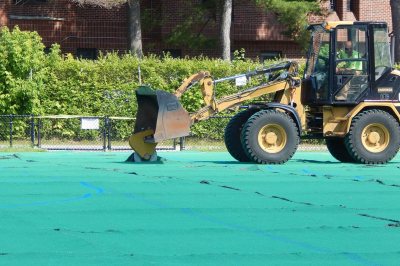 Like a giant pizza cutter, the circular blade on this front-end loader is slicing the Campus Avenue Field AstroTurf on July 6, 2016, prior to rolling it up for removal. (Doug Hubley/Bates College)

A team from Crooker Construction of Topsham, Maine, had cut up and removed the old AstroTurf at the Campus Avenue Field early in the month. Bates was hoping to give reusable surface portions of the old turf, installed in 2000, to local schools, but none were reusable. The AstroTurf had been glued onto a shock-absorbing elastic layer, aka e-layer, of mixed asphalt, stone, and rubber, and that was some tough glue.

“Everything just came up as one solid piece,” says Gillert, whose project management portfolio includes the field hockey field as well as the boathouse.

Around the same time the AstroTurf was being peeled off Campus Avenue Field, AstroTurf LLC was filing for bankruptcy protection, in an action designed to protect an intended sale of the company. The firm was a pioneer in the field of artificial turf, and was also a bidder in the current project. 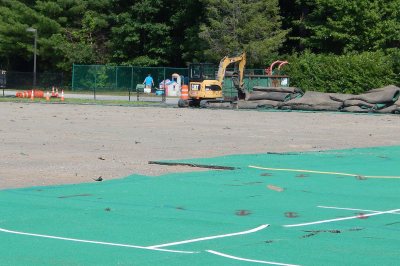 With some of the AstroTurf still in place on Campus Avenue Field, an excavator stacks rolls of the turf that have just been peeled off on July 6, 2016. (Doug Hubley/Bates College)

Talk about turf wars. The filing followed AstroTurf’s $30 million loss in a patent fight with the French company Tarkett. That company makes yet another turf for athletics: FieldTurf, which covers Bates’ Garcelon Field as well as several NFL facilities.

Whatever happens next with AstroTurf the company, AstroTurf the product has left Bates with its honor intact. “A lot of folks have said that we really got our money’s worth with that field,” Gillert notes.

He expects the same result from the GreenFields, made by a company based in the Netherlands. “It’s a great manufacturer with a great reputation,” he says. “Everybody’s really excited to see this new product come in.”

Can we talk? Campus Construction Update welcomes your questions and comments about current, past, and future construction at Bates. Write to dhubley@bates.edu, putting “Campus Construction” or “Do the Vulcans use artificial turf?” in the subject line. Or use the 21st-century commenting system below.