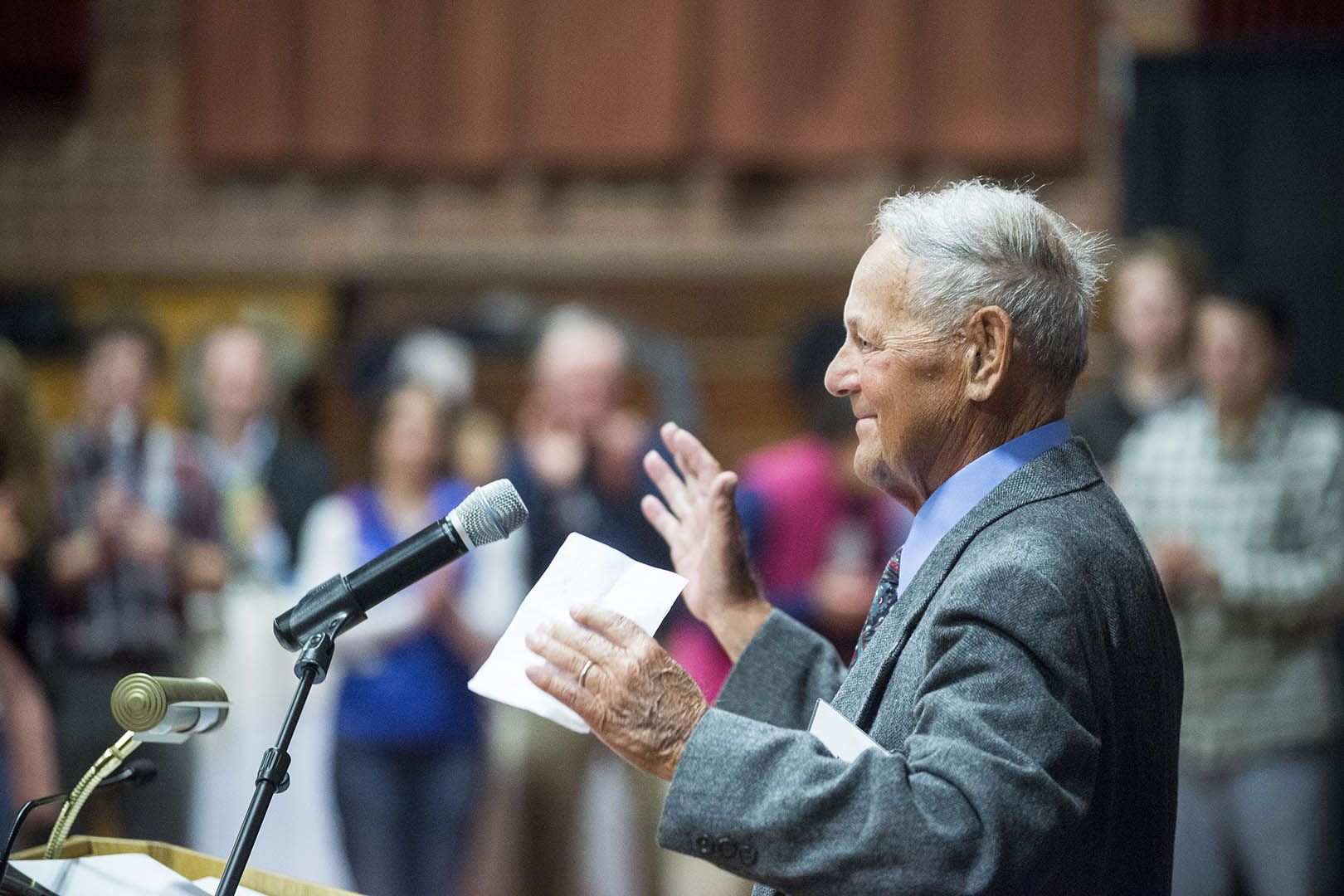 Bob Flynn acknowledges the cheers in Alumni Gym in October 2015 during a Back to Bates event celebrating the naming of donor-funded, renovated alpine and Nordic ski rooms in his honor. (Josh Kuckens/Bates College)

Robert C. “Bob” Flynn, a three-sport head coach at Bates who elevated the skiing program to national prominence and whose warmth and loyalty to his athletes embodied “the force, the spirit, and the iconic Bobcat zen” of Bates athletics, died July 31, 2016, at age 83.

This week’s Bates Athletics Bobcast recalls the life of Bob Flynn. A celebration of Flynn’s life will take place at 11 a.m. on Saturday, Aug. 6, at the Gomes Chapel followed by a reception in Perry Atrium of Pettengill Hall.

“As a coach, Bob Flynn had an exceptional wealth of knowledge about skiing, baseball, and golf,” said Director of Athletics Kevin McHugh. “And all that knowledge was wrapped into the kindest human being you can imagine — someone who used his life to help countless students in three different sports.”

In her announcement to the college campus, President Clayton Spencer described Flynn as a fierce competitor who “also coached his athletes with great loyalty and unabashed kindness, and displayed unfaltering goodwill to colleagues, competitors, and members of the Maine and national sports communities.” 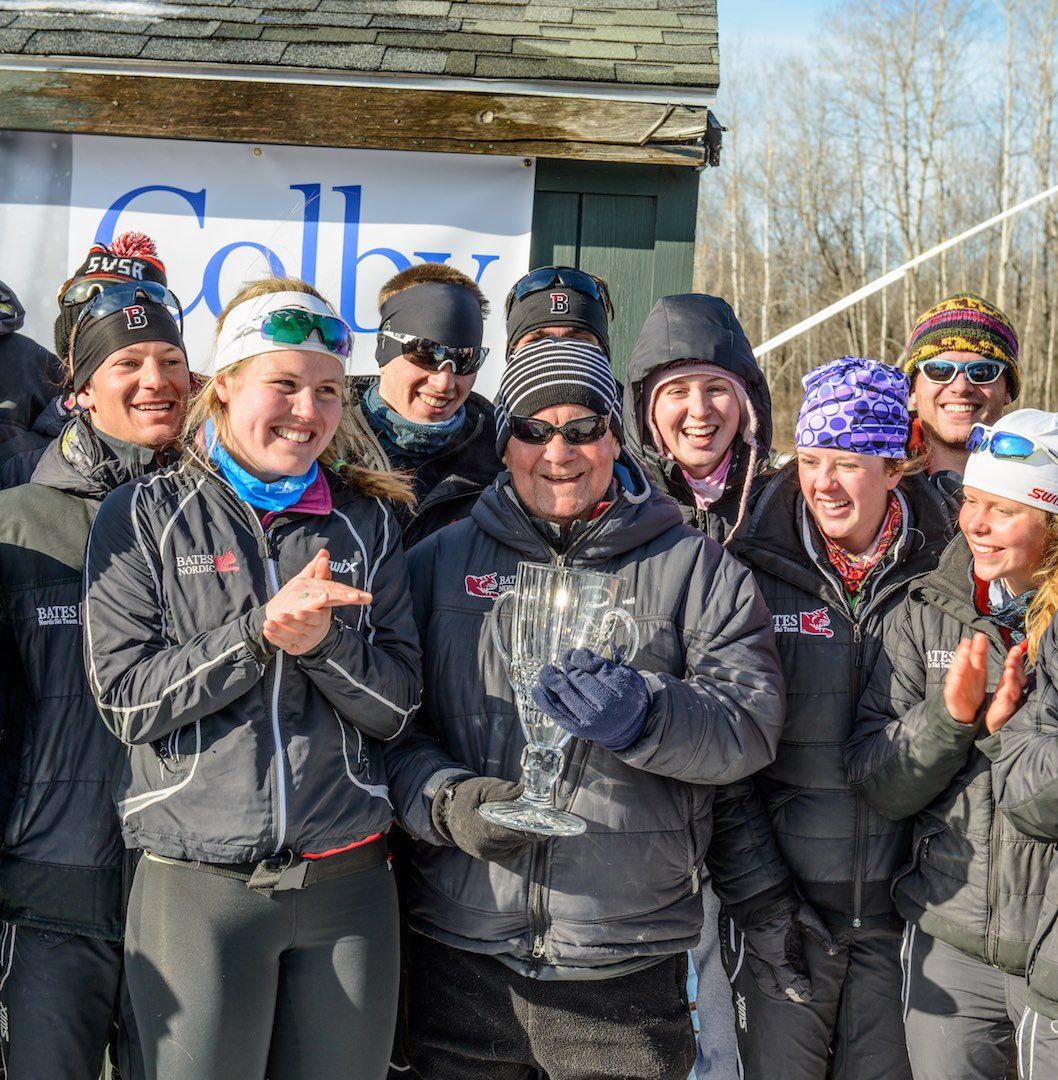 Bob Flynn’s vast sports knowledge was “wrapped into the kindest human being you can imagine — someone who used his life to help countless students in three different sports,” said Director of Athletics Kevin McHugh. From 2013, Flynn joins the Bates Nordic skiers in celebrating the Chummy Broomhall Cup as the top Nordic team in Maine. (Photograph by Steve Fuller ’82)

A member of the Auburn-Lewiston Sports Hall of Fame, the Maine Baseball Hall of Fame, and the Maine Ski Hall of Fame, Flynn is credited with elevating the college’s skiing program to the national prominence it continues to enjoy today under his successors, including his daughter, current Nordic head coach Rebecca Flynn Woods ’89.

In 1968, Flynn took over a resurrected varsity ski program that had been dormant since enjoying success in the mid-1900s. Flynn not only moved Bates into the Division I ranks by 1972 — aggressively recruiting the best Maine skiers along the way — but then audaciously worked toward hosting the NCAA National Collegiate Skiing Championships.

In 1976, he succeeded in that goal, and the meet came to Maine with Bates as host. Dave Irons, a ski industry reporter since the 1960s, recalls telling his editor that the NCAA meet was coming to Maine. “He asked, ‘Is that big?’ And I told him, “Well, when’s the last time they played the Rose Bowl in Maine?” 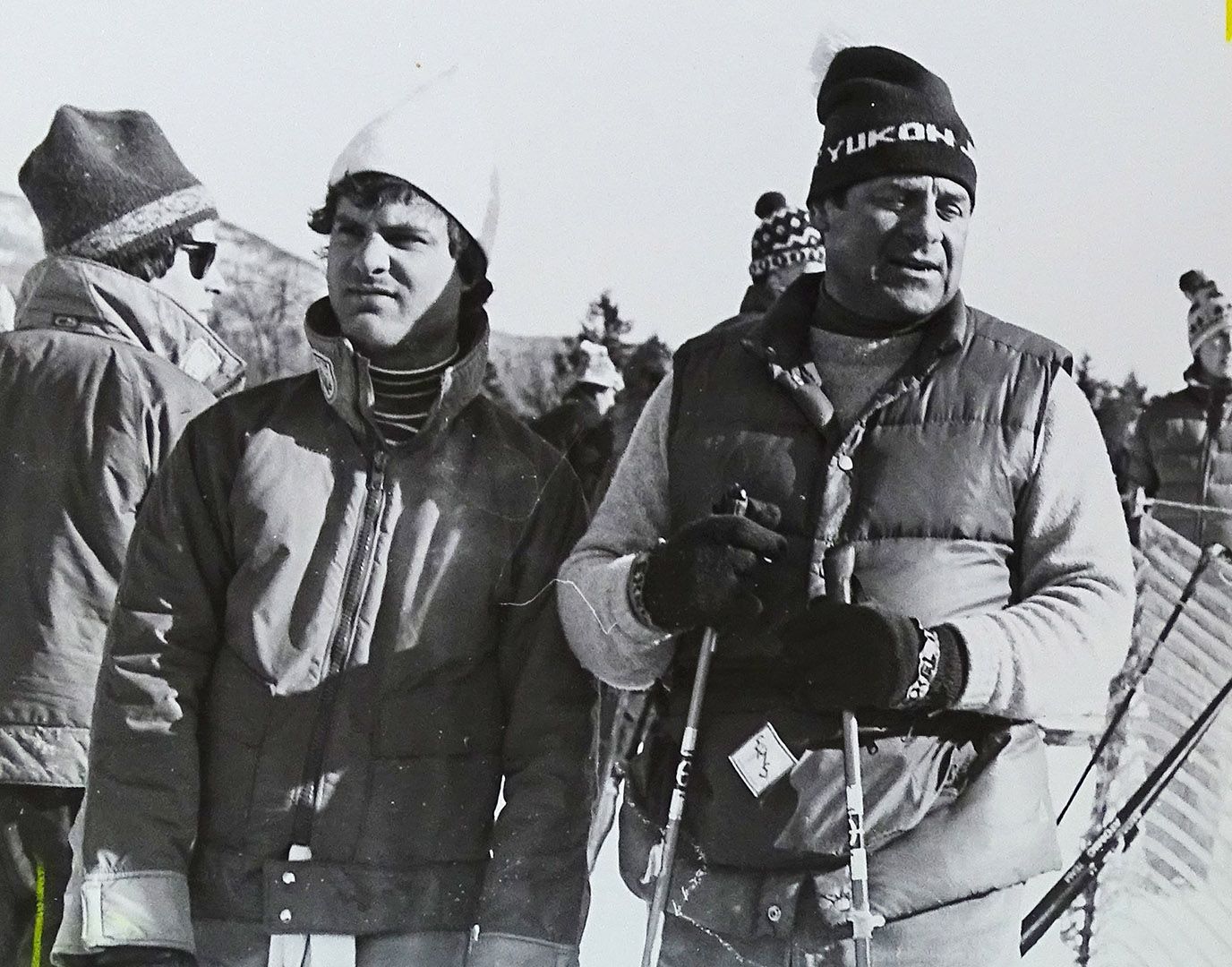 Irons, a director of the Maine Ski Museum who chairs its Hall of Fame Committee, has watched Flynn work his magic through the years.

“He was always persistent,” Irons says. “There aren’t many college ski coaches who would even think about hosting the NCAAs.”

A native of Lewiston, Flynn was an outstanding athlete in football, hockey, skiing, and baseball at Lewiston High School.

Signed by the Pittsburgh Pirates, he played minor league baseball from 1952 to 1957, missing the 1953 and 1954 seasons to serve in the U.S. Army in Korea. He earned a bachelor’s degree from the University of Maine in 1960 and taught public school in Lewiston and Auburn before joining the Bates coaching staff. 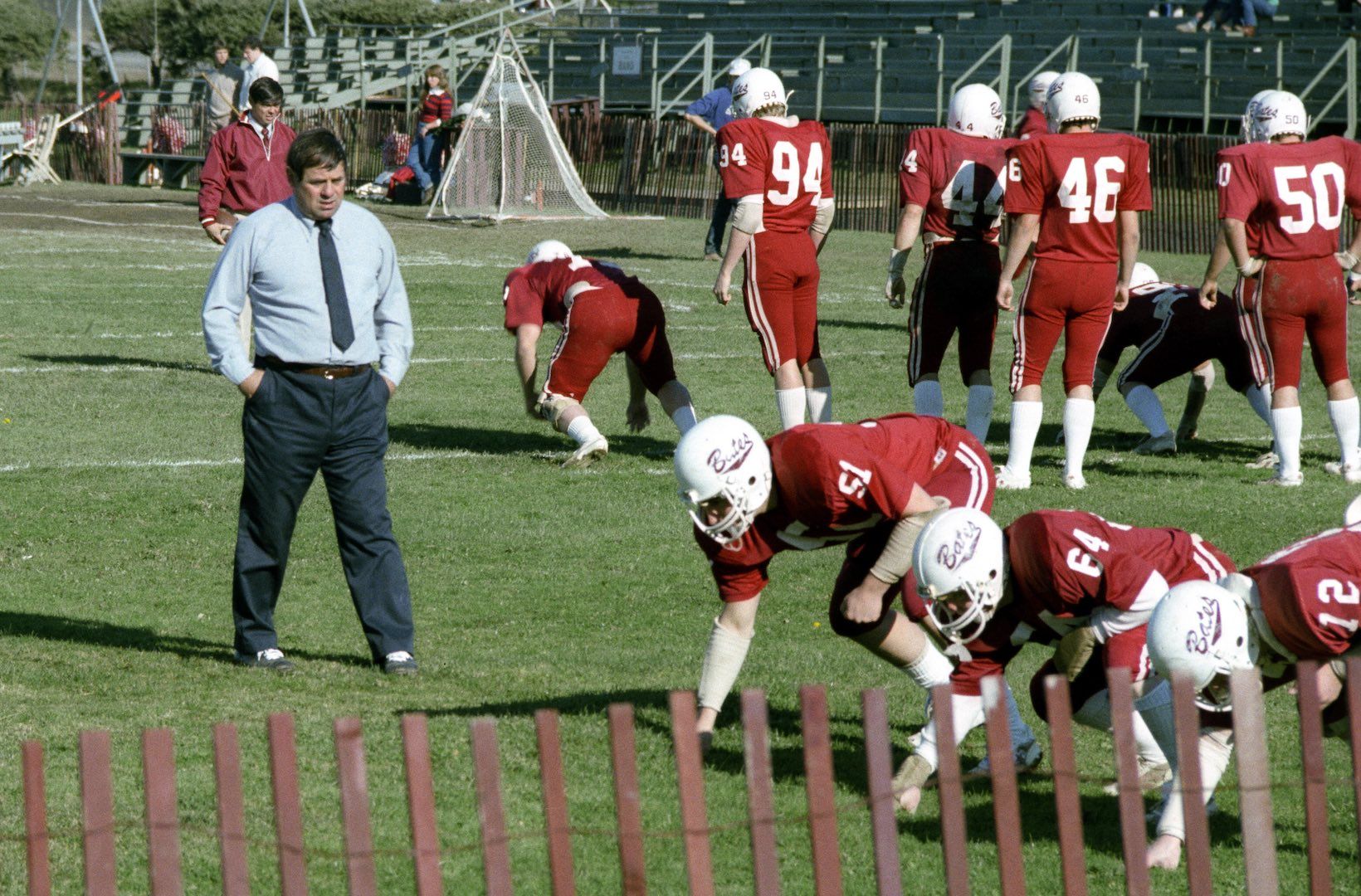 A longtime assistant football coach, Bob Flynn watches the Bobcat linemen go through warmups in 1981. Though a determined taskmaster, wrote a Bates Student sports editor in 1965, “Coach Flynn was never unjust or impersonal to his players.” (Steve Fuller ’82 photograph)

He made an immediate impression, so much so that Bates Student sports editor Jon Wilska ’67 devoted his end-of-season column to the rookie line coach.

“Coach Flynn is a hard taskmaster,” Wilska wrote, but “for all his determination in making his linemen work and his impartial criticism, which was always offered constructively, Coach Flynn was never unjust or impersonal to his players and he gained the highest respect of those who worked for him.”

Across all his sports, “it just didn’t matter to him who you were,” says Irons. “He was nice — period. He would not say anything bad about anyone. And if you asked him to do something for you — he chaired our hall of fame selection committee — he would do it, with knowledge and dedication.” 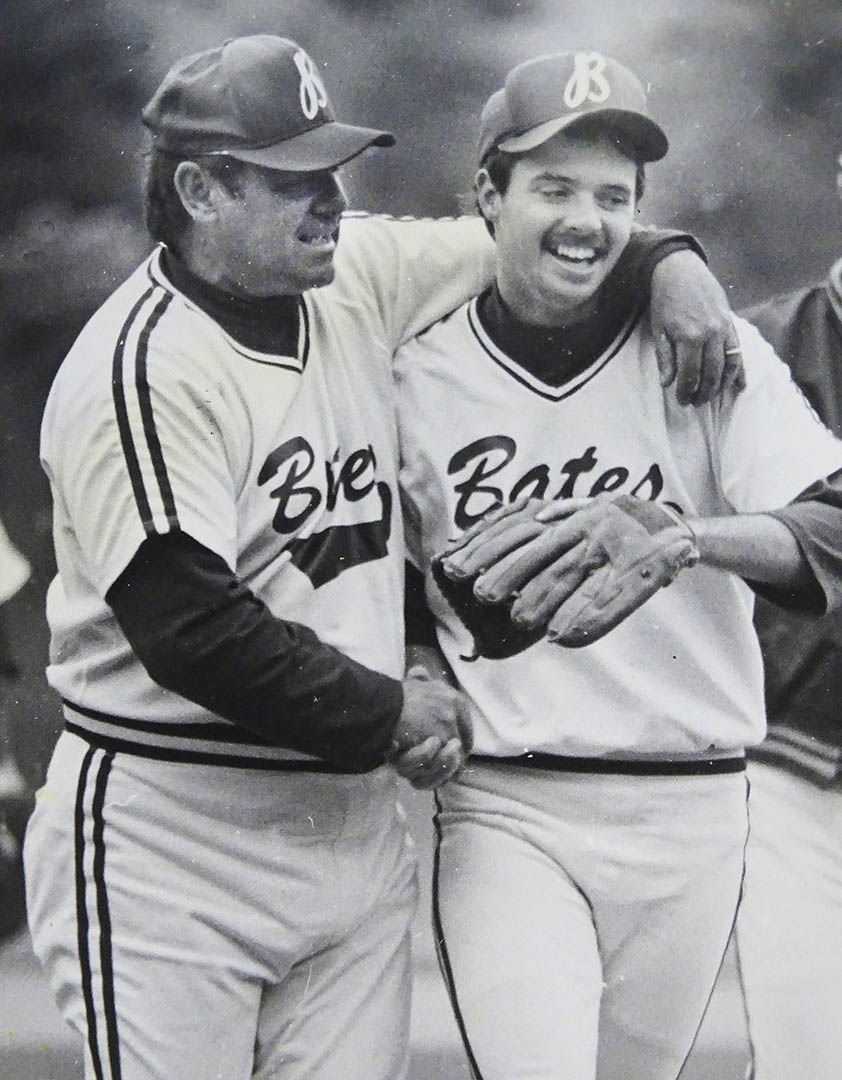 Then an assistant coach, Flynn congratulates pitcher Bob Sprague ’82 after an upset victory over Amherst in the 1982 ECAC tournament. (Muskie Archives and Special Collections Library)

A former president of the Eastern Intercollegiate Ski Association and chair of the NCAA Skiing Rules Committee, Flynn received the EISA Service Award for his “significant contribution and continuing support of skiing in the United States.”

A Bates faculty member in the Department of Physical Education, Flynn was professor emeritus of physical education.

At his induction into the Bates Scholar-Athlete Society in 2015, Flynn was honored for his many years of “encouraging Bates athletes to participate in all Bates had to offer. Most of all, he has assisted Bates students in challenging themselves.”

In October 2015, the college named its newly renovated alpine and Nordic ski rooms in Alumni Gym in Flynn’s honor. At the dedication event, McHugh said that Flynn was “the force, the spirit, and the iconic Bobcat zen” of Bates sports. 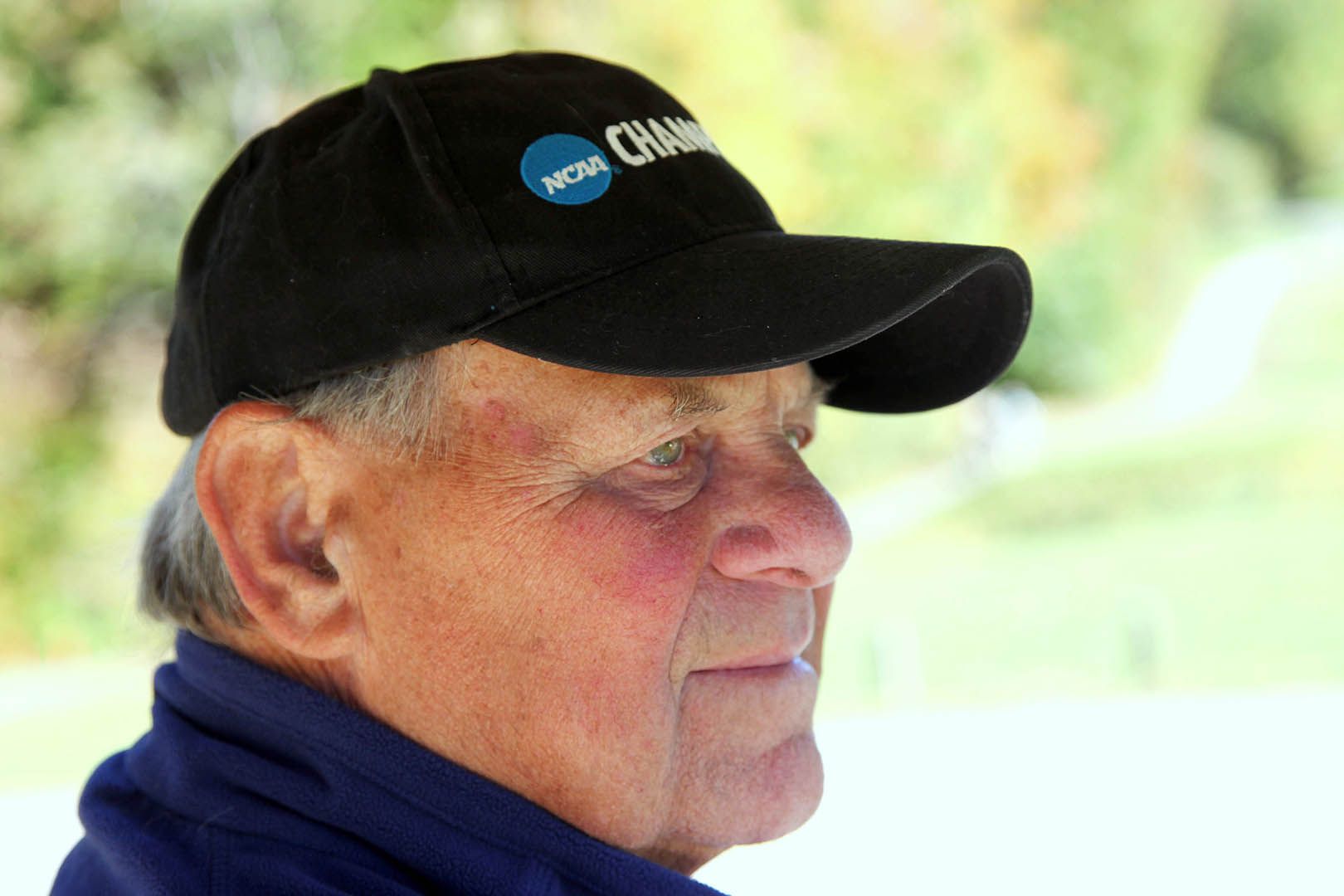 Whatever the sport, “it just didn’t matter to him who you were. He was nice — period,” says Dave Irons. (Phyllis Graber Jensen/Bates College)

Irons attended the event and spoke with many in the huge crowd. “They all agreed that one of the great experiences of their lives was having Bob Flynn as a coach,” Irons says. “I’ve heard that not just last fall, but for years and years. Every kid who skied for him knew that he would go all the way for them.”

One of those skiers was Steve Fuller ’82, now a Bates trustee. Speaking at the October dedication, he said that “Bob’s impact came in the form of access.”

Fuller recalled meeting Flynn at a regional ski meet in Andover, Maine. “He introduced himself, asked if I was going to college, and mentioned Bates.” To which Fuller replied that college might be a longshot: “No one else in my family had been to college, and I honestly wasn’t sure if I could make it work.”

To which Flynn said, “Don’t worry, we’ll figure it out.” For Fuller and so many others, “we’ll figure it out” meant the opportunity to receive Flynn’s “unwavering confidence in us as athletes and as human beings.”

And that applied for every athlete in every sport. 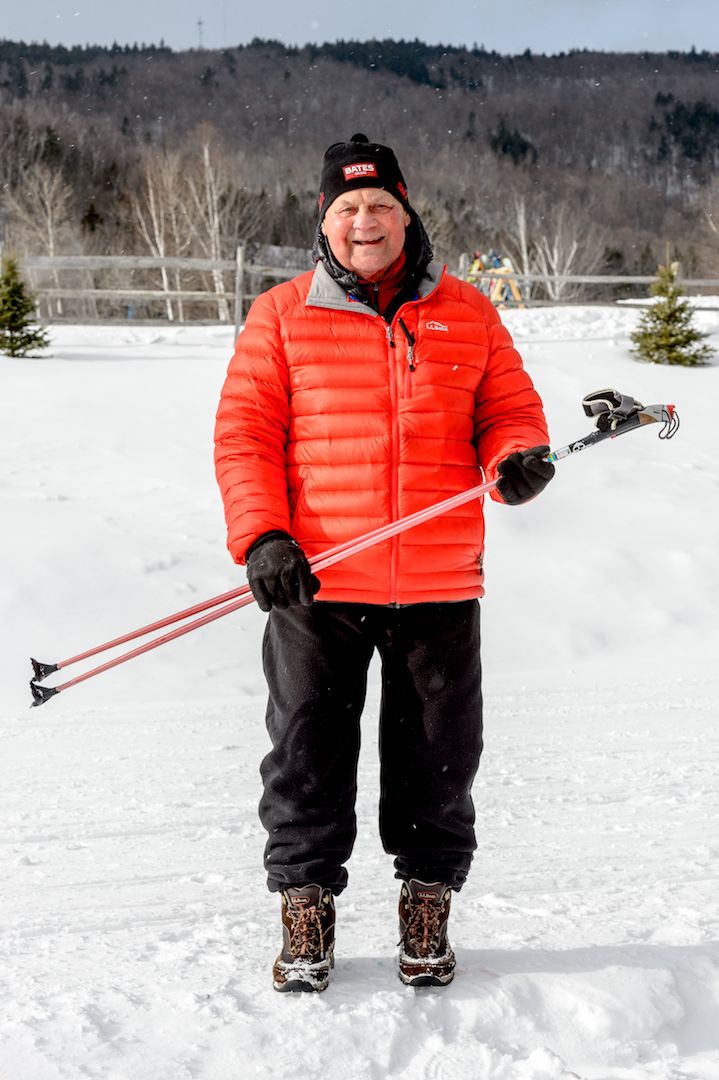 Steve Fuller ’82, who took this photo of Bob Flynn, said that Flynn had “unwavering confidence in us as athletes and as human beings.”

On the eve of their famous upset of Amherst College in the 1982 ECAC baseball tournament, Bob Sprague ’82 was sitting in on a pre-game lunch between the Amherst coaches and the Bates coaches, Chick Leahey ’52 and his assistant, Flynn, who worked with the Bobcat pitchers.

“The Amherst pitching coach was telling Coach Flynn about his rotation for the rest of the ECACs — basically saying we weren’t a challenge,” Sprague recalls. “Then Flynnie stands up, says, ‘You have to get by us first!’ then stalks off.”

Sprague and the Bobcats answered Flynn’s challenge, beating Amherst in 10 innings, with Sprague going the distance.

John Morrissey ’94, a former Bobcat baseball captain who is now director of alumni relations and head baseball coach at Middlesex School in Concord, Mass., says that while Flynn knew the game inside and out, “his big thing was loyalty to his players.”

That loyalty was often exhibited with an ebullience that his players cherished.

In a game vs. Hartwick College his junior year, Morrissey hit the first home run of his organized baseball experience, a dream-come-true shot that won the game in the ninth.

“I rounded third, where Flynnie was coaching, and he was more excited for me than I was. I’ll always hear what he kept saying: ‘Isn’t this exciting!’”