Bates at Night: The Bates Student

Share on EmailShare on FacebookShare on TwitterShare on LinkedIn
paused 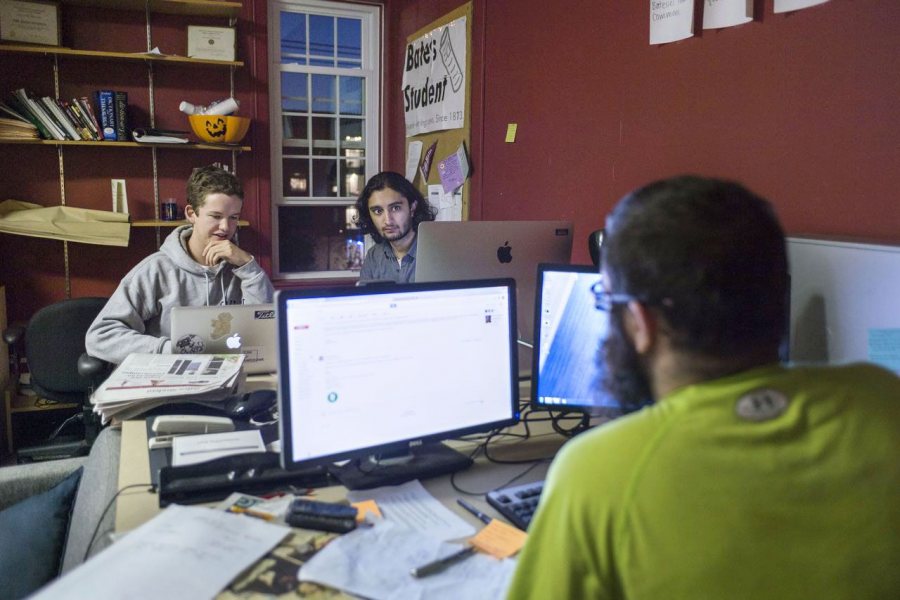 Each Tuesday night, a second-floor room in Chase Hall is “where the magic happens,” says Amar Ojha ’17 of Rocky Hill, Conn., co-editor-in-chief of The Bates Student with Noah Levick ’17 of Narberth, Pa.

Tuesday night is production time for the Student. Section editors arrive first to work on their articles. Copy editors come next, followed by layout editors, who finalize everything with Levick and Ojha.

From there, 1,500 copies are printed by the Lewiston Sun Journal and delivered on Wednesday to high-traffic areas throughout campus.

“Those six or so hours on Tuesday can definitely be intense,” says Levick, “but they’re also a lot of fun because we’re hanging out with some awesome people and putting together a final product that we’re proud of.”

Being a Bates Student editor, says Ojha, gives him a “front-row seat” as campus life plays out. At the same time, he sees the active role a newspaper can play on a college campus.

“The paper has been able to raise questions about specific issues, and oftentimes, we get a reply. It’s that sort of dialogue, that back-and-forth conversation, that is emblematic of Bates’ liberal arts philosophy. And it makes an impact on campus.”

“It’s great to have the freedom to express opinions and investigate stories that may not please those in power,” says Levick. “One of our main priorities is accuracy, and sometimes the most accurate story is not the most flattering to the higher-ups.”

Though the Student is also online, the editors are proud of their commitment to print — especially because the Student claims to be the oldest coed college newspaper.