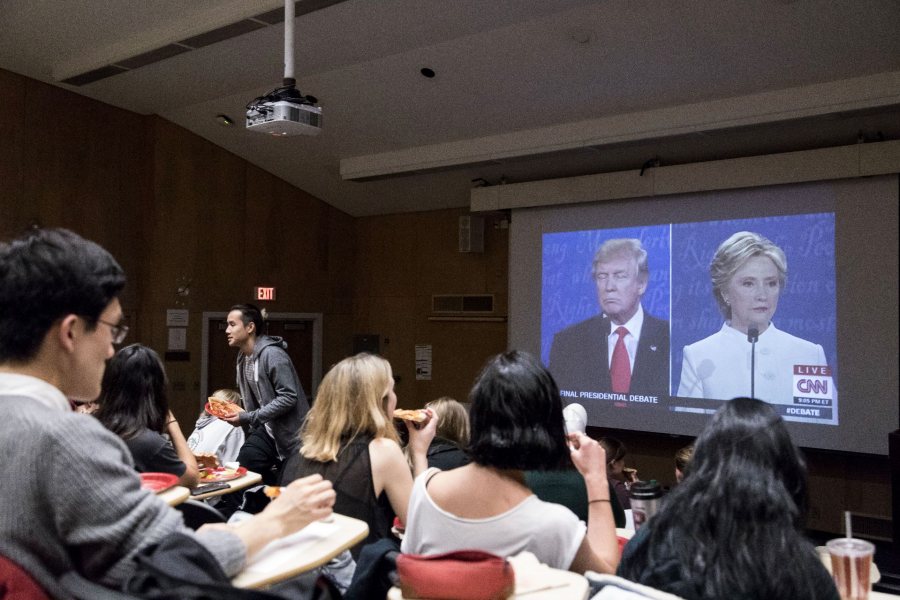 Though fall break made for a small crowd, the reactions were big in the Filene Room as a viewing party scrutinized the third and final presidential debate on Oct. 19, 2016.

Julia Mason ’17 of Niskayuna, N.Y., had seen only highlights of the previous debates before watching the final debate in its entirety. “It is frustrating to me to see a lack of attention being devoted to actual policy plans or issues” said Mason, referencing the litany of pressing topics like climate change and immigration that have gone largely unaddressed in the debates.

“I would call it more of a ‘reality show’ than a political debate,” added Kelsey Pearson ’17 of Orange, Calif. Watching along with Pearson was Christina Felonis ’17 of Athens, Greece. “Kelsey and I have actually watched all the presidential debates,” explains Felonis. “I have found them to be both informative and concerning.”

“Seeing and hearing from candidates who fellow citizens believe in to lead our country provides me with some perspective.”

Francisco Urueta, a member of the Facilities Services custodial staff, had a simple reaction: “Before I die, I want to see a woman in the White House.”

Molly Pritz ’17 of Ithaca, N.Y. offered this measured response: “I think that the debates, regardless of the way one will vote, provide an eye-opening experience for viewers. Sometimes we can get trapped in a bubble of like-minded people, but seeing and hearing from candidates who fellow citizens believe in to lead our country provides me with some perspective.”

When asked to summarize the debate in one word, Elise Rivera ’17 of Washington, D.C., said, “Stunning.” Hanna Chipman ’17 of New York City: “Yikes. We must vote.”

In two weeks, they’ll do just that – and many in attendance chose to register here rather than at home. “I decided to register here in Maine because I want to vote on the day, in person,” said Mason.

The viewing was sponsored by the 2016 Election Season Lecture Series.