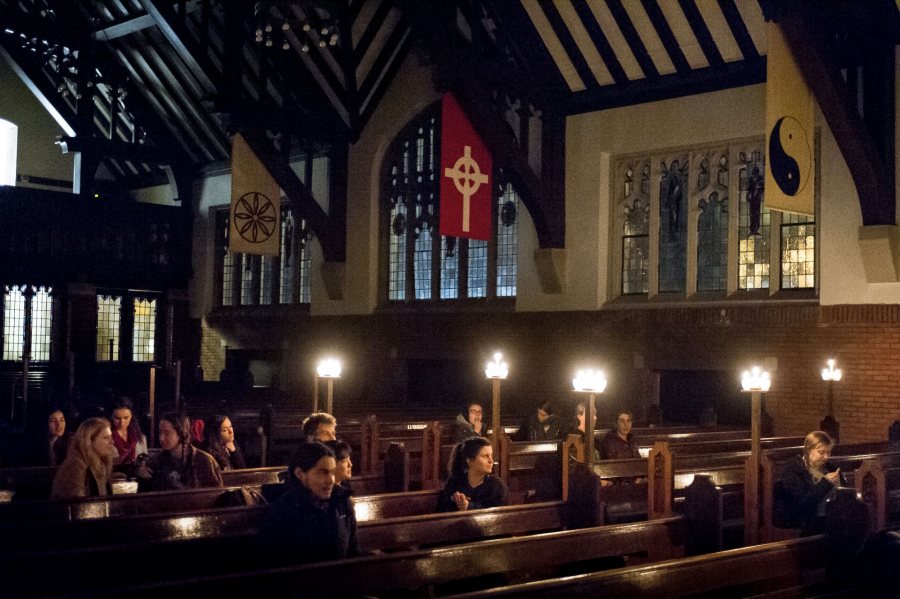 The service runs about half an hour, beginning and ending with the playing of a crystal singing bowl, a traditional Eastern meditation aid whose sound reverberates throughout the chapel. In between, students offer readings, songs, or dance. “You get to sit back in the middle of the week in a candlelit chapel and just be,” said Denali Nalamalapu ’17 of Falmouth, Maine.

Nalamalapu first attended {Pause} as a sophomore, and now, as a Multifaith Fellow, produces the programming every week. During the Nov. 30 gathering, she read the Jorge Luis Borges poem “Boast of Quietness,” which opens the novel Inheritance of Loss that she is studying for literature thesis.

“It’s nice to be able to literally just take a pause and be in silence.”

“There are so many demands on Bates students and schedules are usually full to the brim,” said Multifaith Chaplain Brittany Longsdorf. “We hope {Pause} can create a moment of quiet respite in the week.”

Jackson Whitehouse ’17 of Cleveland, Ohio, played several acoustic guitar pieces on Wednesday, yet he was quick to highlight the restorative absence of sound during {Pause}.

“Silence is a very important thing,” he said, noting the 30 pages of writing soon due for class. “It’s nice to be able to literally just take a pause and be in silence with a bunch of other people who are just decompressing.”