On a chilly Wednesday night, the Bates Brass Ensemble forged a warm blend of sounds during a rehearsal at the Olin Arts center. The new ensemble, formed last fall, features a quintet of brass instruments backed by percussion.

Alan Carr, manager of Olin Arts and director of the ensemble, has been pleased with the new group’s progress.

The ensemble offers a change of pace from larger groups like orchestra or jazz band, he says. “You have to assume more of a leadership role and take more ownership of your part, because each part is equally important. It forces you to be a team in a different way. It’s been fun to watch the kids really grow.” 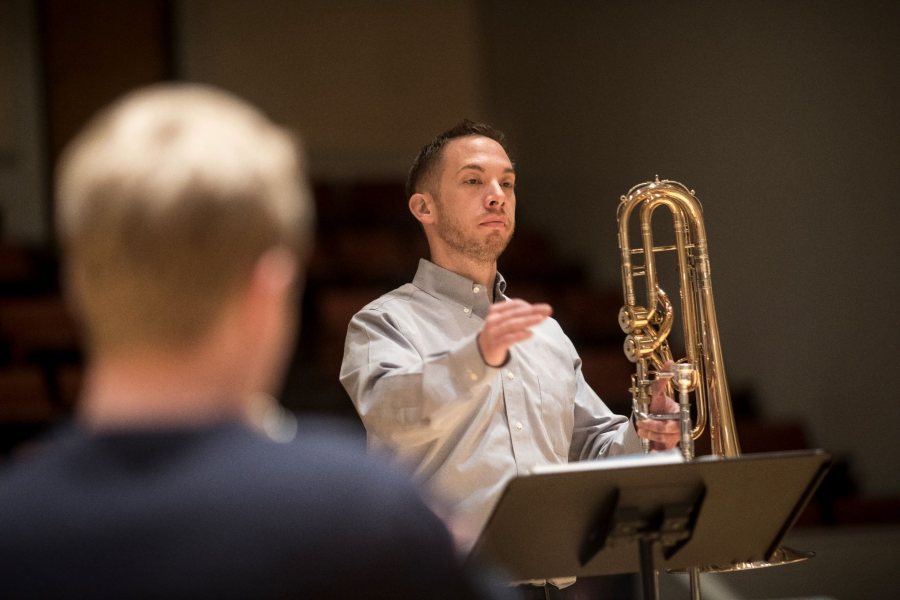 Trumpet player Jamie Fagan ’20 of Wilton, Conn., has also noticed the difference playing in a tighter group. Having always played in larger ensembles where he could “sort of hide,” he now feels “pretty exposed, so it’s really challenged me to take my playing to a different level.”

Fagan added that his coursework in classical music and Western culture has enhanced his playing experience. “Now I know why Bach wrote what he wrote. So that gives you a lot more context when you play, and at the end of the day you play better than you would have otherwise,” he said.

Drummer Kyle Zollo-Venecek ’17 of Concord, N.H., also appreciates the intertwining of disciplines. He says the rigor of deciphering scholarly articles and working through problem sets has given him the discipline to “be able to sit down with a [music] chart, where I can’t read a single thing on it, and actually figure it out piece by piece and play it. You just gotta start from the top and work your way through.”

Zollo-Venecek, who was a guitar player before turning to drums last year, embraces the supportive, structural role that percussion plays in the ensemble. “I’m not the star of the show,” he said. “People want you to play with them because you make them feel good about playing. And that’s kind of the whole thing.”