On Wednesday night, as gym rats smoothly finished their workouts in the Davis Fitness Center upstairs in Underhill Arena, a far less graceful activity began down on the ice: intramural broomball.

Broomball is “like hockey for people who can’t skate,” says Spencer Wallace ’17 of Madison, Wis., captain of the Worldstar Broomball intramural team. In one of two games on a recent evening, Worldstar played the Swedish House Mafia. “Even if you’re good at broomball, you’re not really good at broomball. 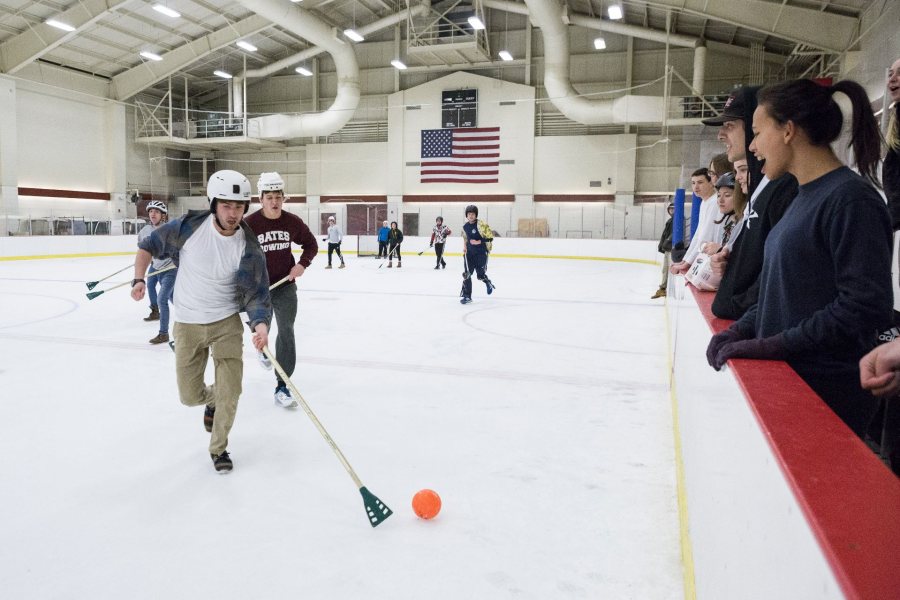 In broomball, players wearing sneakers bat around an inflatable ball, about the size of a soccer ball. The sticks resemble those used in field hockey, except the bottom looks like a car windshield ice scraper. Each team has six players, and the games are 36 minutes long.

Like most sports, speed and control are keys to broomball success. But having neither holds back no one.

For Salt Cats player Ross Richins ’17 of Westerly, R.I., hitting the ball while standing is a challenge so he spends the game sliding around on his knees. “You gotta slide all day,” he explains.

Pointing to his new kneepads, Richins says he went padless during the team’s first game last week and “couldn’t walk for about two days. So I got these today, and I’m rolling solid.”

Andrew Moreau ’17 of Waccabuc, N.Y., captain of the Salt Cats, was sidelined with a bum shoulder, injured in last week’s Puddle Jump. Despite his team’s loss to Sweep or Skull, Moreau remains optimistic.

“We were too hot, too hot,” he explains. “But we’ll come back humble and we’ll crush it.”

Bates at Night: Victory at home

Bates at Night: Intramurals and ‘playing the game we love’