A member of the Bates faculty since 2003, Ryan Bavis became the second holder of the Helen A. Papaioanou Professorship in Biological Sciences this year, succeeding Pam Baker ’69, who retired in 2013.

On Jan. 20, the college celebrated Bavis’ appointment with an afternoon lecture, followed by an evening reception and dinner. Among the guests were Ralph Perry ’51 and his wife, Mary Louise Seldenfleur, whose gift established the professorship.

A respiratory physiologist, Bavis researches how the brain controls breathing and, in particular, how the environment can alter how our breathing changes as we mature. His research has won two grants from the National Institutes of Health’s Heart, Lung, and Blood Institute as well as two Maine INBRE awards.

“His research has significant implications for our understanding of how humans — such as premature babies — develop in settings where their access to oxygen is too low or too high,” said Dean of the Faculty Matt Auer in introducing Bavis’ talk.

Here are seven things we learned by spending some time listening to Bavis discuss his research.

1. His first research thrust didn’t get off the ground.

As a doctoral student at the University of Montana, Bavis wrote his dissertation on the “Physiological Consequences of Exposure to Elevated Carbon Dioxide During Development in Birds.”

“Surprisingly,” he said with characteristic dry wit, “there aren’t many postdoc opportunities in labs where burrowing birds are the model.” So he let his bird idea fly away (at least for now).

2. His successful current research is the result of a “happy accident.”

“I did not expect to be doing this,” said Bavis of his current research.

For his postdoc, Bavis found a lab that was looking at the intersection of breathing control with “plasticity,” the ability of an organism to change in response to its environment.

“And that decision has fueled my grants ever since.”

The lab was in the Department of Comparative Biosciences at the University of Wisconsin School of Veterinary Medicine. “They’d been using a rat model to examine hyperoxia,” which is when an animal’s tissues get too much oxygen. “They had looked at the long-term effects of hyperoxia but thought it was a dead end and didn’t want to continue,” Bavis said.

Bavis saw value in using the same rat model but with a different question in mind. 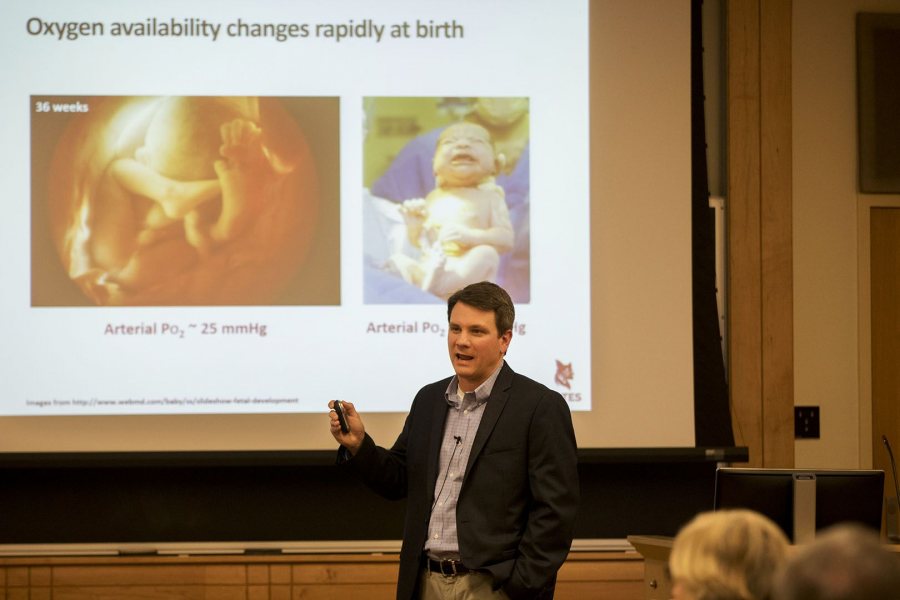 Ryan Bavis delivers a talk on “Learning to Breathe in a New World: The Complicated Role of Oxygen in Postnatal Development” during the celebration of his appointment as the Helen A. Papaioanou Professor in Biological Sciences on Jan. 20, 2017, in Pettengill Hall. (Phyllis Graber Jensen/Bates College)

“My idea was to look at changes in the breathing of babies themselves, since some forms of plasticity would only be evident in that age group and not persist into adulthood,” he said. “That decision has fueled my grants ever since,” not to mention the early-career Giles F. Filley Memorial Award for Excellence in Respiratory Physiology and Medicine from the American Physiological Society, which Bavis received in 2006.

When exposed to low oxygen (hypoxia) in the first few weeks of life, a baby will initially breathe harder — as we would — but will not sustain that high level of breathing as we would. The immature breathing is called the “biphasic hypoxic response.”

Bavis’ lab looks at myriad questions about the biphasic hypoxic response, how it matures to an adult’s sustained response, and how a high- or low-oxygen environment affects all that.

3. He involves lots of students in his research (and has won an award for that).

“My work has been supported by an army of students, and some are here today,” said Bavis, sweeping an arm toward the audience.

For the quality of how he’s mentored that army, Bavis received a 2016 Mentor Award from the Council on Undergraduate Research’s Biology Division.

CUR quoted his students, who praised Bavis for teaching them that “science is an ever-evolving collection of facts, ideas, and windows of opportunity” and that “life works out in its own way and if you put your mind to it, you can reach your own goals.”

The Papaioanou Professor Emerita Pam Baker has said that Bavis gives students a rock-solid foundation in the science that they do, and he teaches them how to communicate what they know 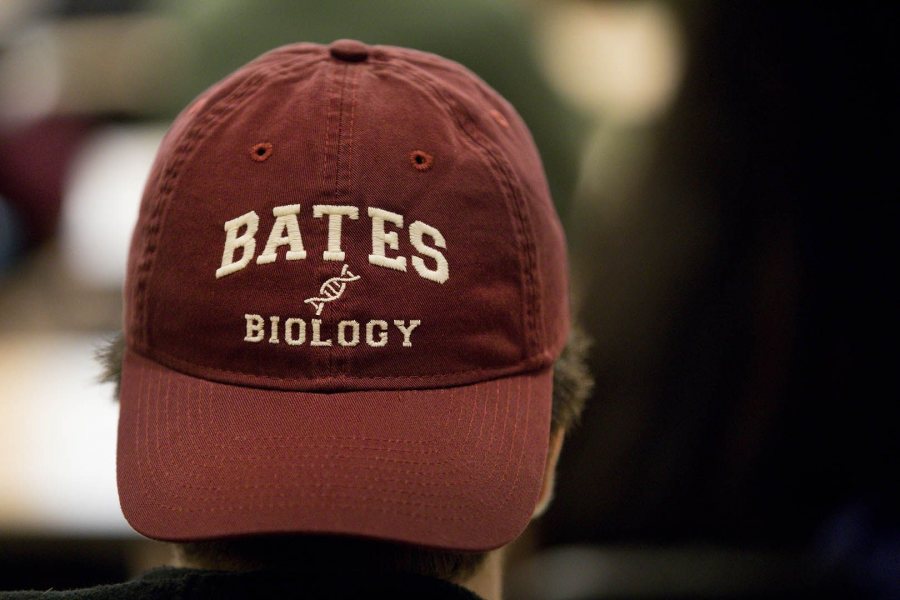 Ryan Bavis’ student researchers have praised him for teaching them that “science is an ever-evolving collection of facts, ideas, and windows of opportunity.” (Phyllis Graber Jensen/Bates College)

“His students become articulate science communicators,” she said, “because Ryan himself is such an effective communicator. In this age, it is critically important that we can explain science to nonscientists.”

4. His students prove him wrong. And he’s fine with that.

Bavis has found that lengthy exposure to low oxygen will slow down breathing’s maturation, and high oxygen speeds it up. “That’s a great story,” he says. “And if I had stopped there, life would have been a lot easier. But I didn’t.”

He wanted to look at the mechanistic changes going on as a baby’s breathing control was being hastened by hyperoxia to see if those changes were identical to the changes in normal maturation.

At first, the mechanistic changes seemed identical. “It was looking good,” Bavis said. “But then Andrew came along.”

That’s Andrew Lachance ’17 of Augusta, Maine, and his experiments have shown that the hyperoxia-induced maturation didn’t really sustain itself — when the oxygen was reduced to normal, the baby rats’ hypoxic responses became biphasic again. 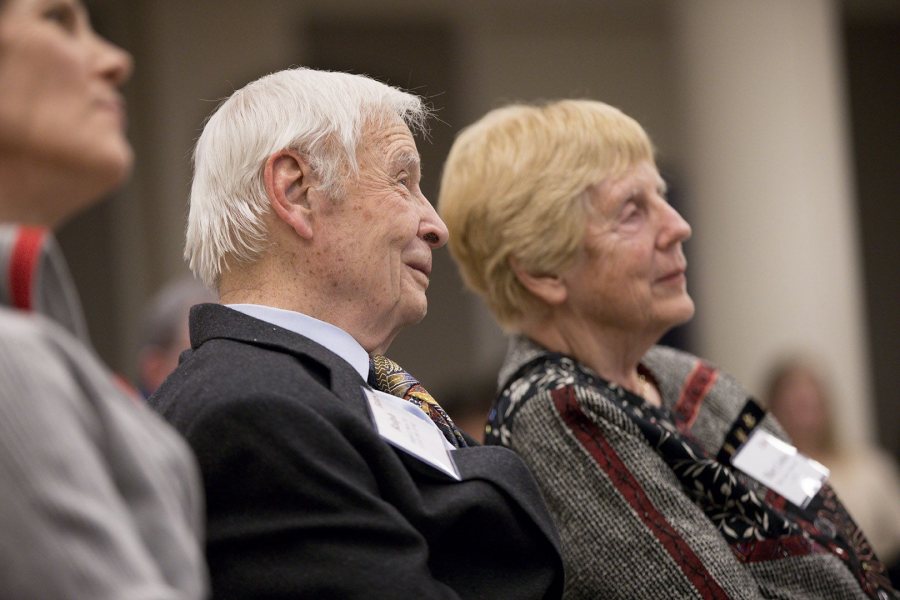 “I’m going to let Andrew figure out what this means,” Bavis said as his audience laughed. “We have to do more experiments. But that can be for next year’s thesis students.”

5. Rats have proven their worth as a human model once again, Bavis says.

During the Q&A, Bavis was asked, “How do you know that a rat’s life stages are comparable to human life stages?”

“That’s a fantastic question,” he responded. “I’d love to show you a paper in my office called ‘How Old Is My Rat in People Years?’”

The answer, it turns out, depends on what trait you’re looking at. For some aspects of the nervous system, a newborn rat is equivalent to a third-trimester human fetus. “So if we’re thinking about studying premature animals, a rat is a very good model,” he said.

6. He believes that there can be too much of a good thing.

In terms of how hypoxia and hyperoxia affect the physiology of a growing mammal, Bavis has been looking at the carotid body, a tiny structure located where our carotid artery forks in our neck.

The carotid body, by acting as a sensor that responds to changes in oxygen in the blood, plays a role in regulating breathing. In a newborn rat, “high oxygen tends to slow the growth of the carotid body and reduces its size at adulthood,” he said. 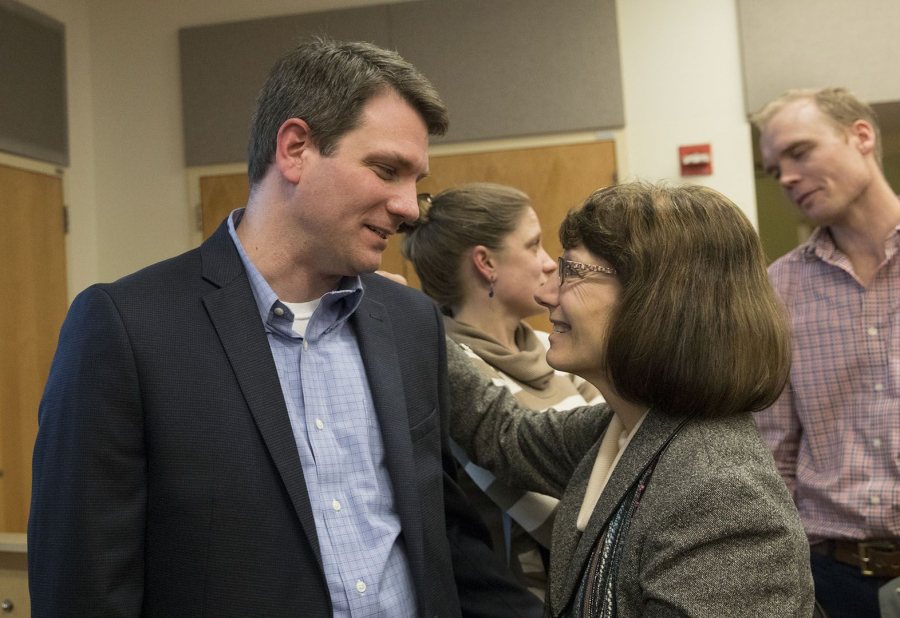 In that sense, there can be too much of a good thing when it comes to oxygen.

“Prolonged exposure to high oxygen in a developing infant can be bad,” he said. “It seems to tip a balance from something that initially strengthens and speeds up the development of the nervous system” — by helping to the maturation of breathing control — “toward something that is potentially harmful,” in terms of a smaller carotid body later in life.

Just what a smaller carotid body means in terms of health is not known, Bavis said.

“In newborns, this could delay a baby’s arousal if the sleeping baby is not getting enough oxygen,” he said. “In adults, it could affect how we perform at high altitudes. But more research is needed.”

7. More researchers and clinicians are paying attention to the effects of high oxygen in human babies because of Bavis’ work.

For a long time, it’s been known that giving baby extremely high oxygen can damage the developing eye. It’s the believed cause of Stevie Wonder’s blindness.

“But moderately high oxygen levels that clinicians think are safe now may still be having an effect,” Bavis said.

Clinicians weren’t thinking about the breathing of people exposed to moderately high or low levels of oxygen “until they looked at my lab and the work of my postdoc mentor Gordon Mitchell,” Bavis said. “And now they’ve started.”

‘Love drug’ oxytocin’s possible dark side is the topic of $300,000 Bates study