Q&A: Kat Harling ’17 explores the power of the graphic novel

Last year, I was introduced to the graphic novel by Eden Osucha, associate professor of English, in her course “Fiction in the United States.” We read Daniel Clowes’ Ghost World, and I found myself immersed in a genre of literature that I did not know existed.

While I’m new to the genre, Kat Harling ’17, an English and rhetoric double major from Long Island City, N.Y., is becoming an expert.

Her honors thesis in English looks at how trauma — such as war, terrorism, and family dysfunction and abuse — is represented in the nonfiction graphic novels Safe Area Goražde by Joseph Sacco, The Shadow of No Towers by Art Spiegelman, and Fun Home by Alison Bechdel.

I was doing a seminar with Eden called “Privacy, Intimacy, and Identity,” and I did my final project on Bechdel’s graphic memoirs, looking at how nonfiction graphic novels are well-situated to represent autobiographies. I even made my own mini graphic novel, and I’m doing an independent project over Short Term with Eden to finish that.

Of all those graphic novels, which is your favorite?

One is Pride of Baghdad by Brian K. Vaughan. It is about a zoo in Baghdad that gets bombed by U.S. forces and all the animals escape. It’s full of metaphors and beautifully drawn. I also have a soft spot for anything that Alison Bechdel writes just because she is great — super-witty and quite sardonic. 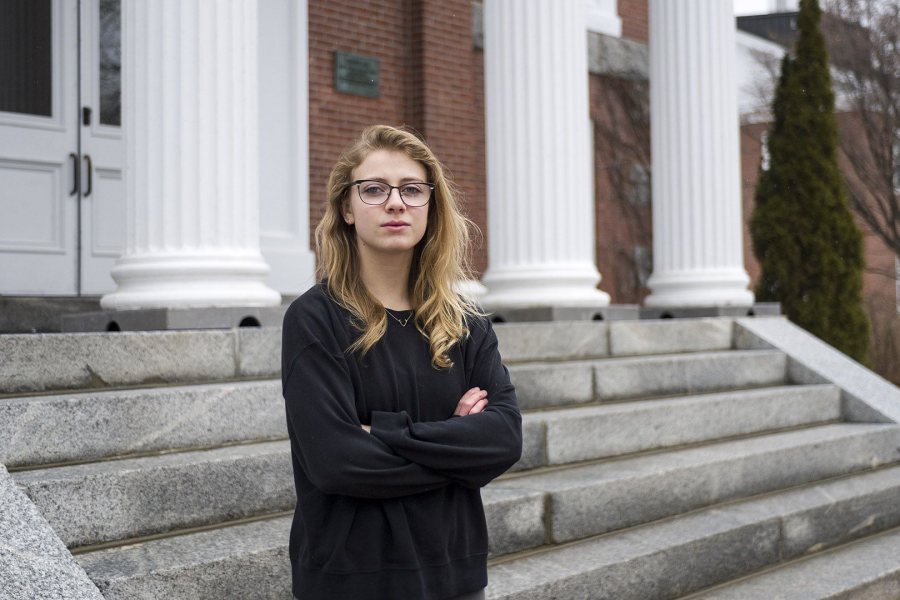 Why is reading a graphic novel such a powerful experience?

With a graphic novel, you read the text and you have a visceral experience of looking at an image. You actively blend them together, and that’s what makes graphic novels so powerful as a representative form — even more powerful than photojournalism.

That hybrid experience — of reading and looking — can communicate an experience that is otherwise unspeakable or un-drawable.

A graphic novel really involves the reader because you actively participate by jumping from panel to panel. When reading a graphic novel, the reader has to fill in so many things to connect the visual and the verbal narrative.

You end up with that feeling of participation. And in the case of these novels about trauma, this sense of participation makes you aware of your distance, which is important when bearing witness to survivors and to those who died in the experience.

I look at how graphic narratives successfully represent experiences of personal and collective trauma in a way that maintains the experiences’ authenticity while still communicating the facts and details of the experience.

That is why graphic novels are well-situated to earn a place in documentary form and the conventional frames through which we represent and internalize history.

How did you choose the three novels for your thesis?

After Eden recommended Cathy Caruth’s Unclaimed Experiences, I started reading on my own about trauma theory and how trauma is represented in literature. That made me want to study how graphic novels can be about personal, political, or mass trauma.

I picked Fun Home because it is an autobiography and representative as a graphic memoir.

Joe Sacco is a journalist who has reported on war through these huge, elaborate graphic novels. I picked one of his less-well-known books, Safe Area Goražde, about the Bosnian war.

Art Spiegelman’s In the Shadow of No Towers, about 9/11, is a mix of the personal and the political and is a useful hybrid of the two types of graphic novels that I wanted to study.

Eden Osucha is your thesis adviser. Would you say that you two had a good relationship throughout the process?

Eden was super-supportive the entire time. We would meet once or twice a week, and when I sent her pages she would leave them in her office door a couple days later with helpful comments and suggestions.

We met at the Den the week before it was due, and she gave me all my pages back and said, “This is great. Just breathe.”

For me, the key is a quiet room that has computers with big screens. The iMac Lab in Pettigrew was really big this year.

I also used the Coram computer lab. Coram was also really good when I had to scan pages of the graphic novel that I was referring to.

You probably had many late nights working on thesis. Did you have any late-night snacks that helped you get through the process?

Any form of chocolate. Every day one of my close friends would bring me chocolate. I also drank a lot of coffee, which is not a snack but obviously necessary.

What was the most challenging part of your thesis? Any moments where you were just stuck?

Most English papers don’t have theory sections but every rhetoric paper does. 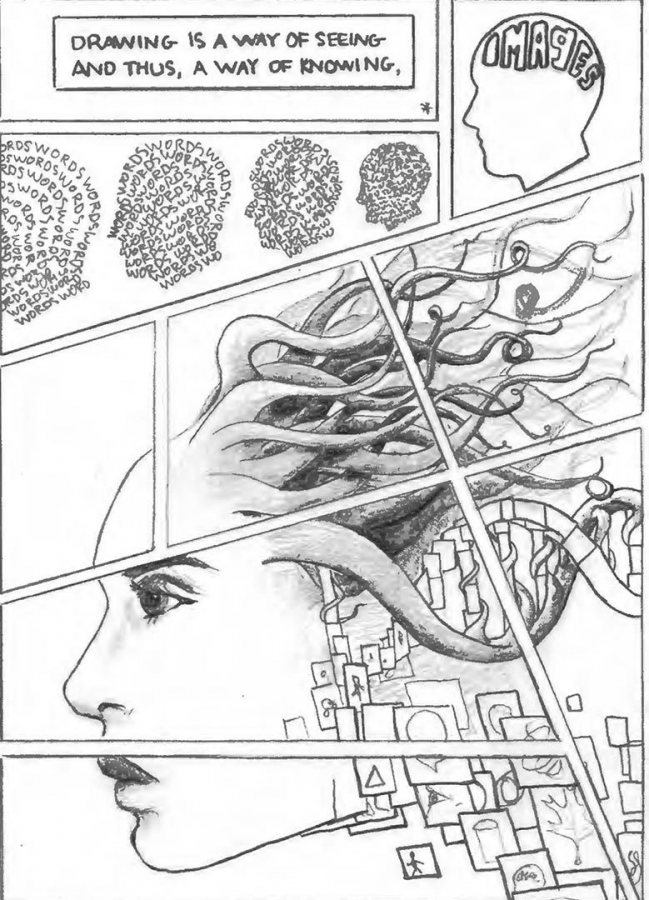 This detail from Harling’s own graphic novel evokes the visual way that people create narratives. She’ll complete the novel during a Short Term independent project with her adviser, Eden Osucha.

I wanted to analyze the novels as text while also talking about theory, in this case theory about how trauma is represented and manifests itself in people’s lives.

There is a lot of complicated, psychoanalytic theory about trauma, and it was challenging to figure out what was important to include and what could be glossed over.

In the end, that difficulty made me realize that there is a larger discussion to be held about the way we conventionally theorize and represent trauma, and about the need for more discussion on how we document the personal experiences of other people.

What was the most enjoyable part of working on your thesis?

It’s very satisfying at the end to sit back and look at the finished product and see your name written all over it, knowing that this was your very own project from the beginning to the end.

Reading the graphic novels was also really fun. I must have read each graphic novel at least 25 times, scrawling them full with my notes.

Did you have any last-minute panics?

I had a panic two weeks ago when I realized that my bibliography was in the wrong format. I was using the old MLA guide, which has recently been updated, which caught me completely off-guard. So I spent an entire day rewriting my entire bibliography.

I actually submitted my thesis an hour early, which I was really proud of, but realized in the submission form that I got the title wrong and then had to email them and ask if I could re-submit it. But I think I knew it was always going to be a scramble at the end.

What advice would you give to underclassmen and juniors at Bates who are about to write thesis?

Know that there is no one right way to write thesis. Everybody has their own process and timeline. Definitely don’t compare yourself to other people and where they are in their process. Also, choose something that you love because you will have to work on it for at least half a year. It is good to get obsessive about something.

What’s next for you?

I am going to be teaching in Asia next year. I don’t have much formal teaching experience, though I’ve been working in the Writing Center for many semesters and have been a teaching assistant several times. I’m excited to step out of my comfort zone and experience something new.

Video: How Sarah Rothmann ’19 learned to take a ‘step beyond’