He also included a happy photo of Johnson and Wheeler in survival suits prior to their plunge into a Norwegian fjord last summer.

For Bates seniors, the honors thesis is the pinnacle of academic achievement — never more so than this year, as seniors and their faculty advisers had to make the sudden move to remote learning due to COVID-19. Moved from the original March deadline, honors were due April 1.

Despite the disruption, there was continuity: Bates professors supporting their advisees.⁣

“Beginning with field work in the Arctic, which involved hiking over rough terrain and riding in small rubber boats in all kinds of weather, Hannah and Emma have been incredibly great to work with — always positive and always thinking,” said Retelle. ⁣ 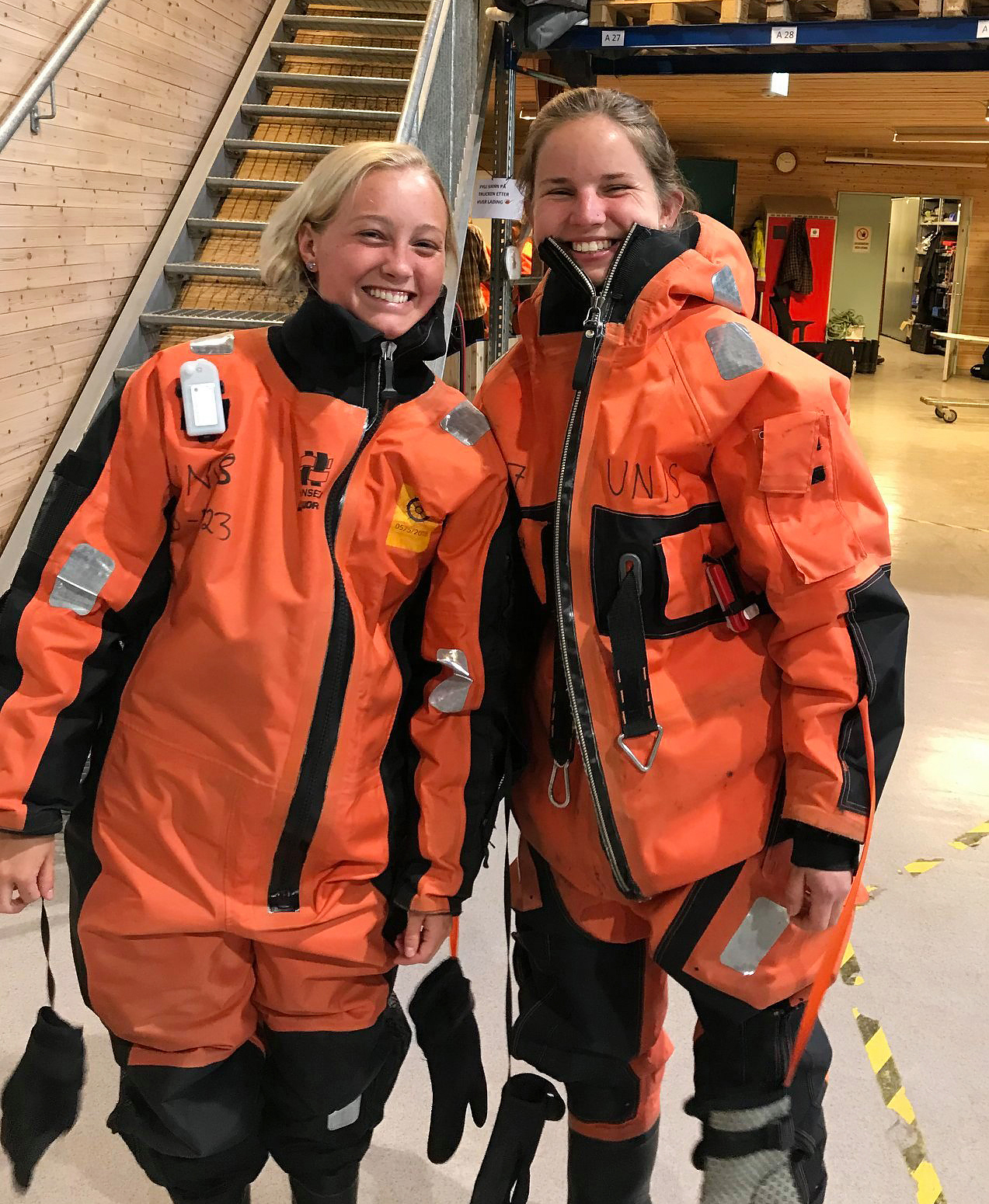 Hannah Johnson ’20 and Emma Wheeler ’20 pose in survival suits during safety training at the University Centre in Svalbard, prior to the start of summer 2019 fieldwork, which entails travel by boat. They’re about to jump into the fjord to test their suits. ⁣(Photograph by Mike Retelle)

The two theses draw on fieldwork that Johnson and Wheeler conducted with Retelle and other scientists in Svalbard, Norway. The former’s thesis looks at “Late Glacial to Holocene Sea Level History of Kapp Linne, Svalbard.” The topic of the latter is “A Hydroclimate Reconstruction in the Changing High Arctic Environment, Linnédalen, Svalbard.”⁣

Johnson sampled boulders on old shorelines with a hammer and chisel to determine the ages of the shorelines and reconstruct sea level during the retreat of the last ice sheet, as the Svalbard ice sheet 20,000 years ago is an analog of what is happening in Antarctica and Greenland today.

“After she came back she worked at the University of Vermont to dissolve the rock samples in hydrofluoric and perchloric acid, wearing hazmat gear,” Retelle explains.

Meanwhile, Wheeler’s project entailed recovering samples from a glacial lake to reconstruct its hydrology. “Her fieldwork required hauling a mooring by hand over the gunnels of a Zodiac boat, and then recovering samples and electronics from the mooring,” Retelle says. 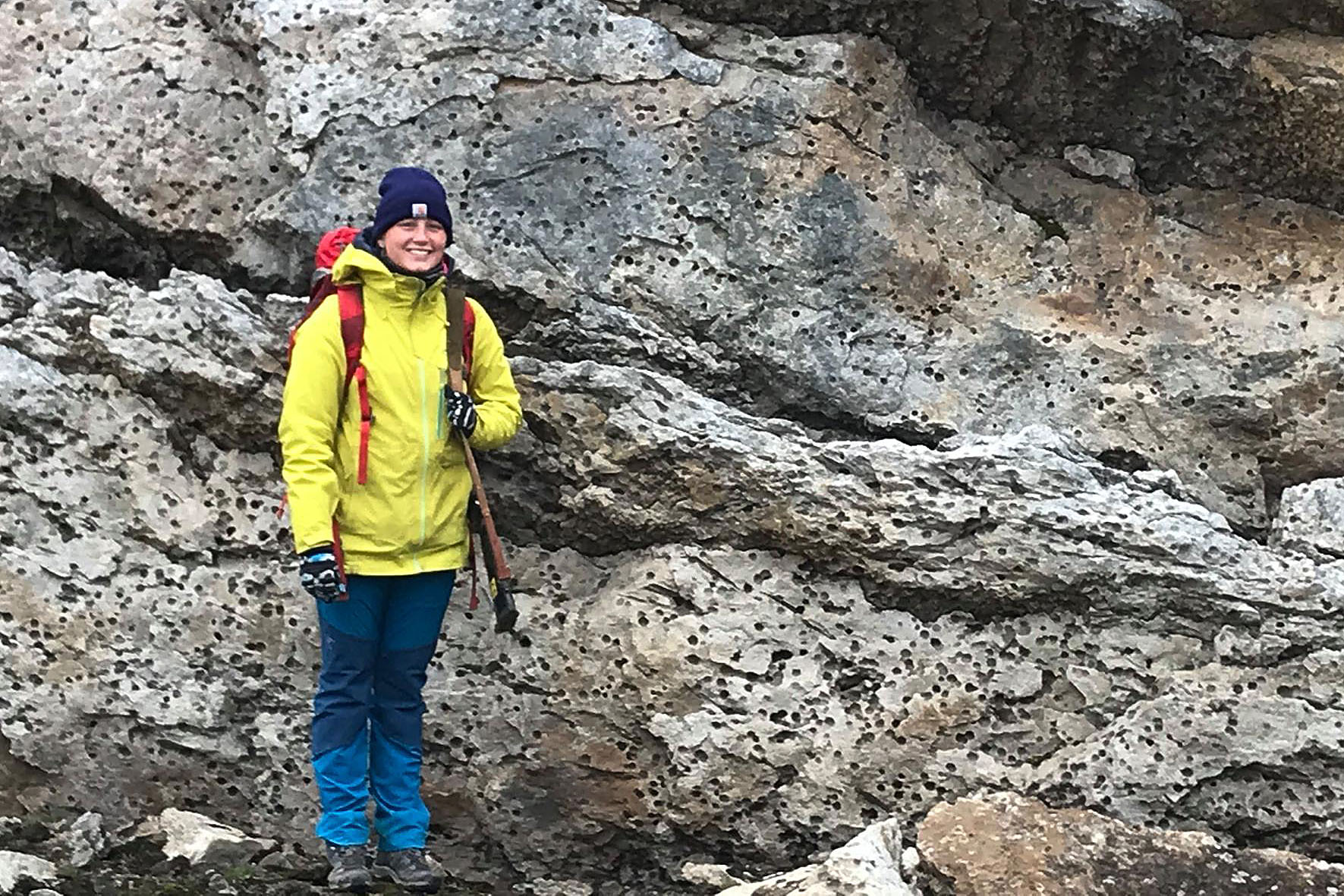 During summer 2019 fieldwork in Svalbard, Hannah Johnson stands at an outcrop above Linnévatnet, a lake at Spitsbergen, Svalbard. The white quartzite behind her is pockmarked with weathering pits. (Photograph by Mike Retelle)

Wheeler remembers what inspired her to choose geology as a major: a single image.

“After my first year, I remember seeing a picture Bates had posted of two students, one standing on the other’s shoulders, inspecting a small, strange-looking bucket on top of a three-legged structure.”

The caption, she recalls, “said something about students doing research in the High Arctic with Professor Mike Retelle. My immediate reaction was, ‘Wow, I want to go there and do that’ — even though I wasn’t even really sure what ‘that’ was!” (She now knows the photo depicted the weather station in the Linné Valley on Svalbard. The bucket records precipitation).

“He is always ready to talk about anything, sediment-related or not!”

“Emma and Hannah are also mentally tough — just ask their coaches,” said Retelle. Wheeler is a three-time NCAA champion with the rowing team and a French translator for a local program that provides legal services for asylum-seekers. Johnson is a swim captain who was part of the team’s record-setting 200-yard medley relay at this year’s NESCACs.⁣ 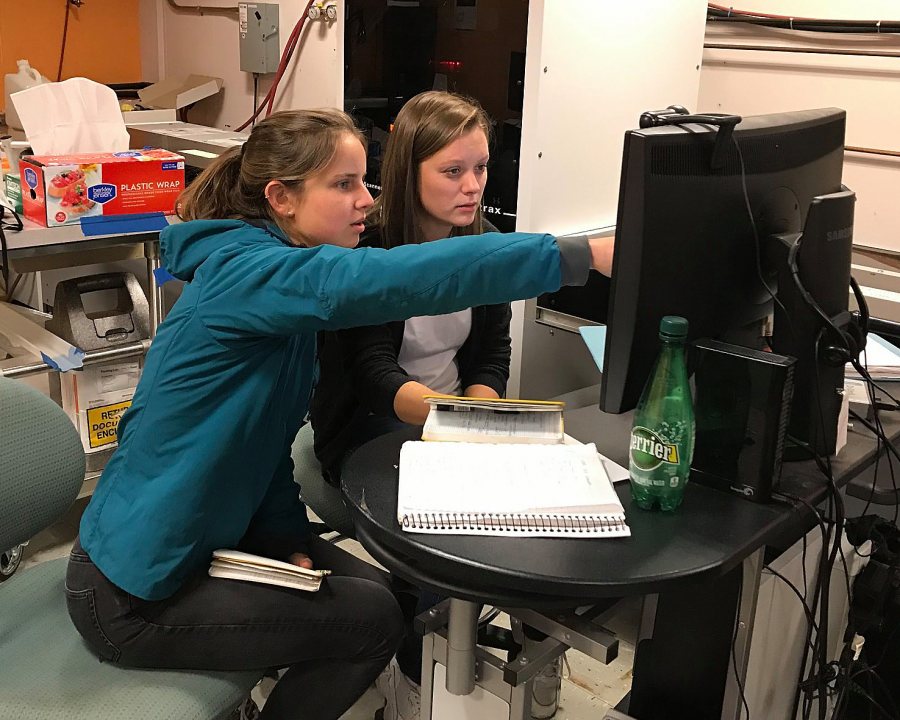 Emma Wheeler ’20 (left) and Inger Marie Aasberg, a student at the University Centre in Svalbard, do geochemical analyses of their sediment cores last September at the R.B. Gilmore XRF lab at the University of Massachusetts. (Photograph by Mike Retelle)

Typically, seniors would upload their theses from the comfort of their campus residence or the library, then celebrate with friends. That part was missing this year, but not the pride of achievement.

“Submitting online from home was not how I envisioned how this project would end,” said Johnson. “But I am still really proud of this accomplishment and incredibly grateful for the thoughtful guidance from Mike throughout this whole process. Not being at Bates and having face-to-face interactions was difficult, but Mike quickly replaced those with Zoom meetings.”

“Mike has been an incredible mentor,” Wheeler adds. “Not only has he shared his extensive knowledge of and experience in Arctic geology, but he is always ready to listen to new ideas or think through questions I have presented.

“He also really cares about his students, and is always ready to talk about anything, sediment-related or not!”