How did Ed Muskie ’36 get baseballs signed by the Yankees, Giants, and Dodgers?

By the summer of 1956, the era of three Major League baseball teams in New York City was drawing to a close, which gives a wow factor to a collection of three signed baseballs once belonging to statesman Edmund Muskie ’36 and now held by the Muskie Archives and Special Collections Library.

Signed by players on the Giants, Yankees, and Dodgers, the balls were a gift from New York Gov. Averell Harriman to his fellow governors, including then-Maine Gov. Muskie, attending the annual governors conference in Atlantic City, N.J., in June 1956. The baseballs are now among the vast number of Muskie-related artifacts in the Bates archives. 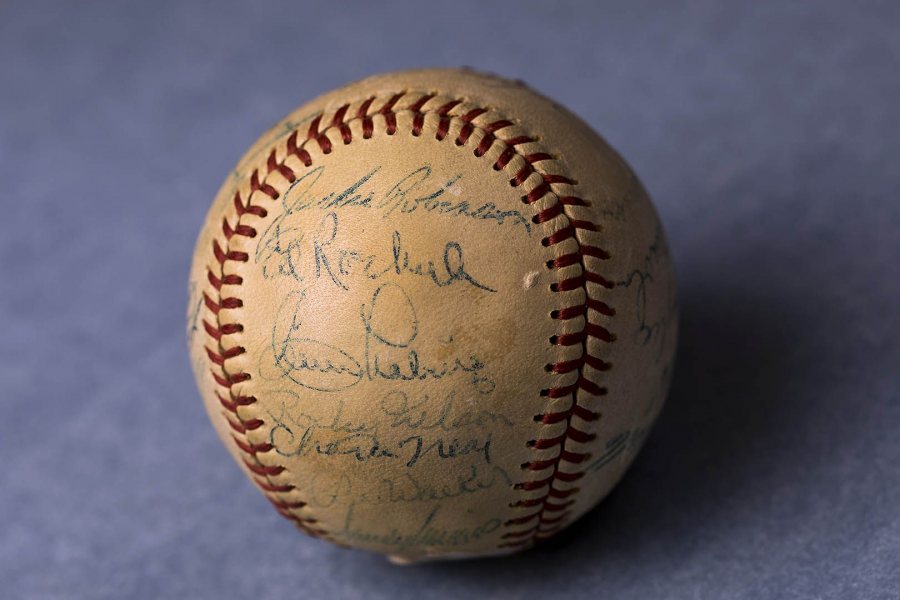 A gift to then-Maine Gov. Edmund Muskie ’36 when he attended the 1956 Governors Conference, this baseball, one of three, is signed by members of the Brooklyn Dodgers, including Hall of Famer Jackie Robinson at top. (Josh Kuckens/Bates College)

Harriman’s gift-giving was reported by Sports Illustrated in the context of Harriman’s slow start in his bid for that year’s Democratic presidential nomination. “There are a lot of ball games being won in the ninth inning this year,” he told his fellow governors. (Harriman, however, would receive only 15 percent of the vote at the 1956 Democratic convention, losing to Adlai Stevenson.)

A year later, the Dodgers and Giants would both announce their moves to Los Angeles and San Francisco, respectively.

During the Governors Conference, Muskie played a bit of hardball. A roundtable on education saw the governors address exploding enrollments (due to the baby boom) plus teacher and classroom shortages.

Muskie suggested that in Maine, even with its “hard core of Yankee independence,” people were beginning to see “education as being a national problem.” 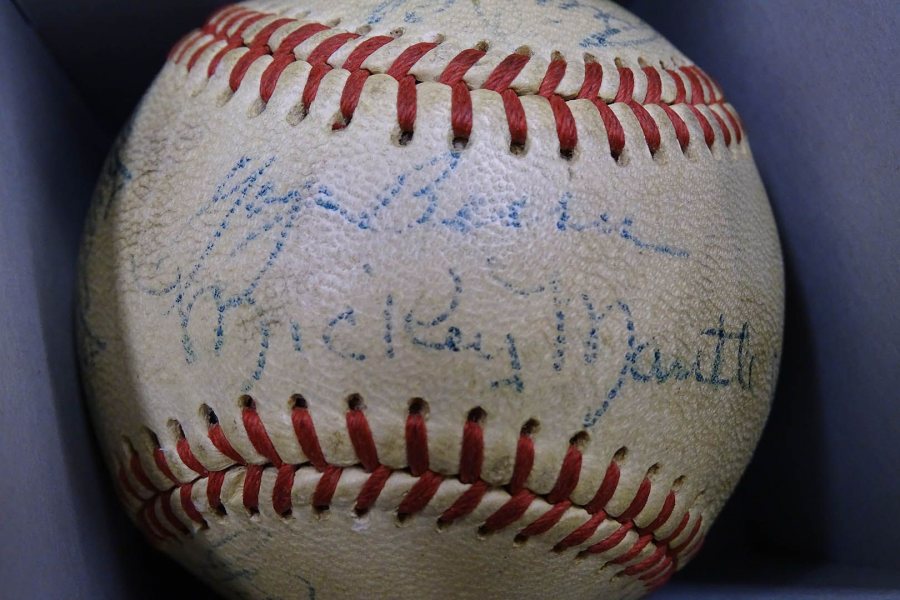 This baseball, once belonging to statesman Edmund Muskie ’36, is signed by the 1956 New York Yankees, including Yogi Berra (top) and Mickey Mantle. (Jay Burns/Bates College)

That brought rebukes from Southern governors, including Gov. Allan Shivers of Texas, who said that the states could handle education “more ably and at less cost.”

“Maine people have got enough guts.”

With his famed temper flaring a bit, Muskie countered that “I am not down here on behalf of the state of Maine to ask the state of Texas for anything. However, for anyone to seriously suggest that Maine is as well-able to meet these problems as a state like…Texas is to ignore the economic facts of life.”

Muskie assured the governors that “Maine people have got enough guts so that they will work to overcome the discrepancies and compete with people in other areas of the country” when it comes to educating the state’s children.

Still, he said, “we are talking here today about a national policy in the field of education. [I]f you want to realize the maximum value of Maine’s human resources, and the human resources of every other state, then you’ve got to think of the problem not in terms of your state’s ability to meet your problems, but the country’s ability to meet the problems of every one of the 48 states.”

Beyond ‘founded by abolitionists’: Students and faculty undertake a more inclusive examination of Bates’ founding story