To economists, “creative destruction” is something practiced on a grand scale by capitalist societies as one mode of production is swept away by the next.

Her work is messy, cathartic, sometimes cringeworthy, often funny, and always thought-provoking, battering at the structures of power, gender roles, and societal norms.

This summer, visitors to Bates get to experience Gilmore’s work up close and personal — really close and personal, thanks to a new museum commission, a viewer-participation piece involving sledgehammers — as the Bates College Museum of Art opens the exhibition Kate Gilmore: In Your Way on June 9.

Gilmore, who on June 10 will discuss her work and preside over the inaugural hammer attack on her viewer-participation piece, spoke to us from her home in New York City.

You have often been the protagonist in your work, and some of your recent performance pieces have featured groups of women, but not you. And now at Bates you’re inviting viewers to take a hand in your work. What will they do?

The work is steel cubes, fabricated in Portland. They’re pink and red, and on gray carpets. There will be sledgehammers available, and every day from one to two o’clock [through Oct. 7], the piece will be open for the public to attempt to destroy these objects.

In the destruction — which is almost impossible because the cubes are steel — they start actually to look pretty spectacular. If people do it for long periods of time it becomes hammered steel, in contrast to these really exuberant colors.

Similar to pieces you had at the New York City gallery On Stellar Rays during the winter.

“Beat” was a big performance piece with female characters on top of metal cubes, pounding to a beat with work boots and brass knuckles. And I did that hammered steel piece that you’ve seen on the website.

We changed plans for the show right after the November election, because what I was doing before just didn’t make sense any more — to me at least. I’ve always been somebody who responds to my circumstances and how I view the world, and how it affects our daily existence. That’s really what I’m thinking about in my work. 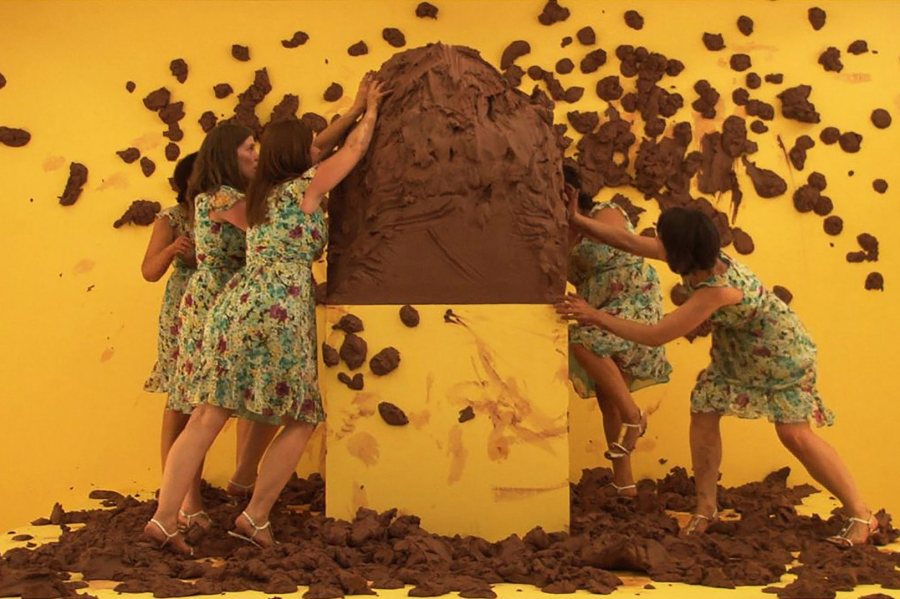 A frame from the 2011 video “Sudden as a Massacre” by Kate Gilmore.

You’re not going to see a picture of Donald Trump on the cubes that we’re destroying or anything like that, but my work has definitely been influenced by our new situation. Steel seems to be the best material for how I’m feeling right now — just in terms of where we are in our society right now, that kind of anger and rage.

It’s not unusual for things to get broken and messes made in your work. As an aesthetic device, how does damage work for you?

The idea of people rising up or tearing down structures that are holding them back is still really relevant. And whether you’re talking about gender, or sex, or race, or class — OK, it’s really about who has the power and who doesn’t. So I would just say that damage and destruction and rage continue to be a very important language for me.

How do you stay safe while doing your pieces? Have you injured yourself?

Just cuts and scrapes and stuff. You know, I don’t do anything that’s beyond my physical capabilities. Getting hurt is not part of the piece! For some people, that becomes part of their language, but it’s really not for me.

You started out in sculpture, then moved to videos that you’ve performed in. Then in 2010, you made a piece where seven women in yellow dresses moved around on top of a big yellow cube — for 10 hours a day. That was “Walk the Walk,” presented in Bryant Park for New York City’s Public Art Fund. That was your first live public project and your first project that you didn’t appear in.

That commission was for a big outdoor sculpture and live performance. I was petrified, I didn’t know what to do. I was like, “How am I going to do this? I’m so used to doing that.” 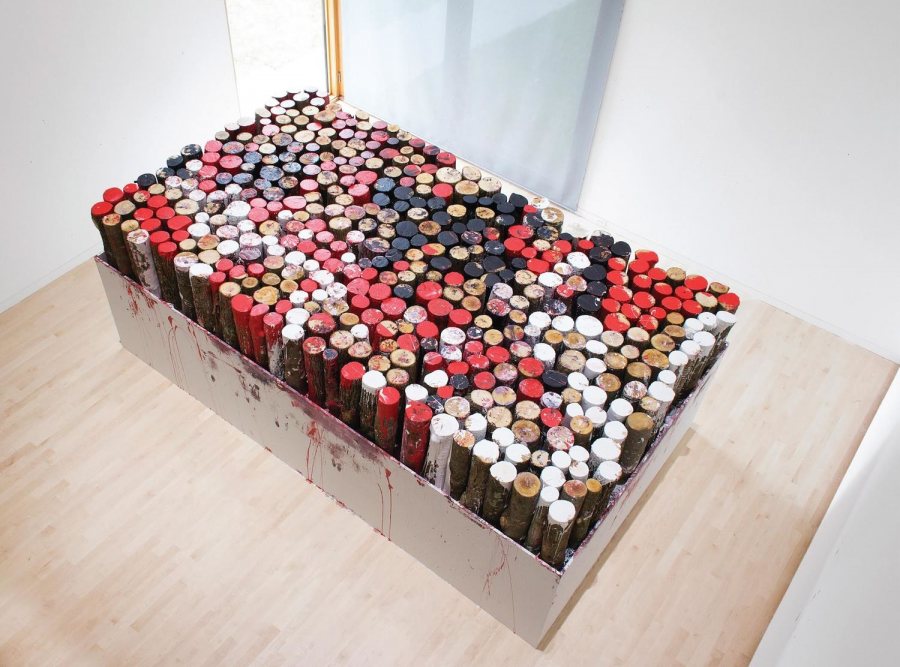 For “Roll in the Way,” a work responding to the machismo of artists like Richard Serra, Kate Gilmore dipped more than 500 pieces of wood in paint and placed them on this platform.

And then, I did it — and it changed my life and offered me a whole different perspective and way of making work. It’s allowed sculpture to come back for me in a major way, and it’s allowed me to be an observer of the work, as opposed to always being the participant.

So that’s been really exciting, and this way of working has become really important to me. I haven’t made a video in a couple of years because I’ve been focused on these performances and the sculptures. But I’m going to make a couple new videos.

You also developed pieces where spilling or splashing paint, or paint that looks like trickling blood, is an important element.

There’s always been a robust conversation about paint in my work because my videos are very painterly — the way I layer color and action within a canvas-like frame. So I just started to think about paint directly. And then the actual material of paint offers this great physical action — if you put paint in something and you break the thing, it explodes, right? Then you have this proof of an action because of the remnants of the color.

And then, thinking about painting in terms of the art world and art history, and the weight that it’s given, and [mythologized macho] male painters like Jackson Pollock — thinking about them, and then forcing the female body into making work. All of those things came together and that’s why I started doing it.

Why is humor important in your work?

Beauty and humor can be used in a very similar way. You can make people feel comfortable, and they spend time and relax, and then you can give them the undercut — you know, while they’re feeling comfortable, hopefully force information onto them. So that’s how I use humor and, I would say, aesthetics.

I’m very invested in the language of humor. That’s how I communicate in general. I can’t remember who said this first, but you can say whatever the hell you want if you’re funny!

You teach at Purchase College. How does your education at Bates inform how you teach, or does it?

Bates was really important because it gave me this really strong liberal arts background — I was a double major with art and history. So I have ways of making work that combine all these different things, while maybe someone from more of an art school background will just be very invested in making work and then the other stuff comes later.

How I teach is definitely very conceptual. It’s very influenced by current events, history, and political systems. Bates has allowed me to offer more than just an art education to my students.

You’re going to be at Bates for your 20th reunion. What does it mean to you to show your work at Bates?

I was very Olin Arts Center-centered. I was just in the studio all the time. I was very focused on what I was doing. Bates is really important to me, so I’m really happy to show there. It’s nice that what I do is being supported. 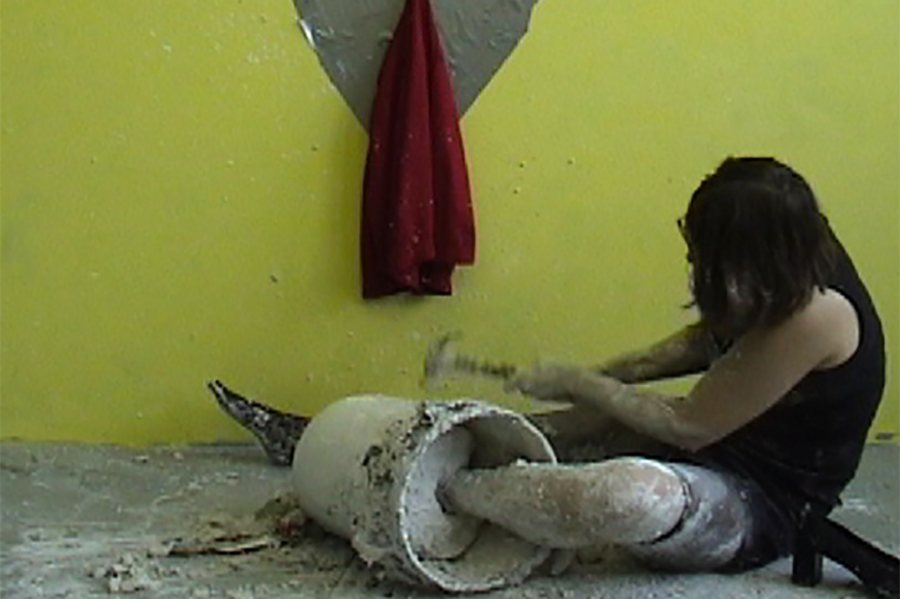