If you’ve been thinking that you just can’t go on, darn it, without the Bobcat Den and its soup and salad bar, breakfast buffet, Bates Burgers, midnight confabs, etc. — take heart.

It’s predicted that the Den will reopen for business by Sept. 5, as the HVAC upgrade that has kept the semi-subterranean eatery closed since June 11 will be largely complete by then. 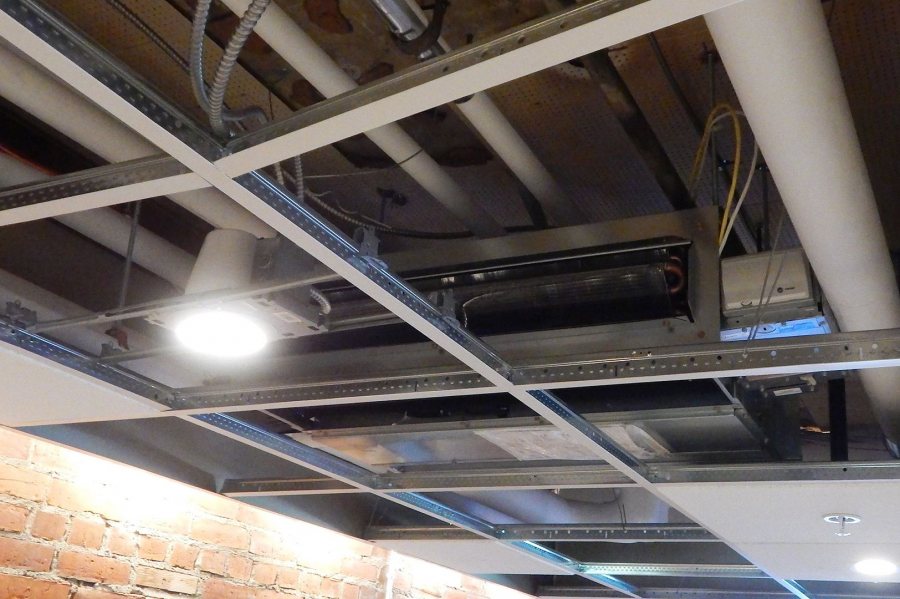 The silvery metal box above the ceiling rails is one of four fan-coil units that will heat or cool the public area of the Den. (Doug Hubley/Bates College)

The Chase Hall project has entailed the installation of new heating and cooling equipment serving both the Den and Memorial Commons, upstairs. From the comfort standpoint, that will mean a substantial improvement to air conditioning in the Den and, for the first time, the delivery of AC to the old high-ceiling dining room, now a multipurpose space.

Under the direction of John Rasmussen, who is wrangling the HVAC project and is also the college’s energy manager, the undertaking will also loop Chase Hall into the campus-wide monitoring and control system for space heating.

Finally, the project will unify all of Chase under a single heating technology, rather than the dual systems — forced hot water and steam heat — that have done the job for more than a decade. 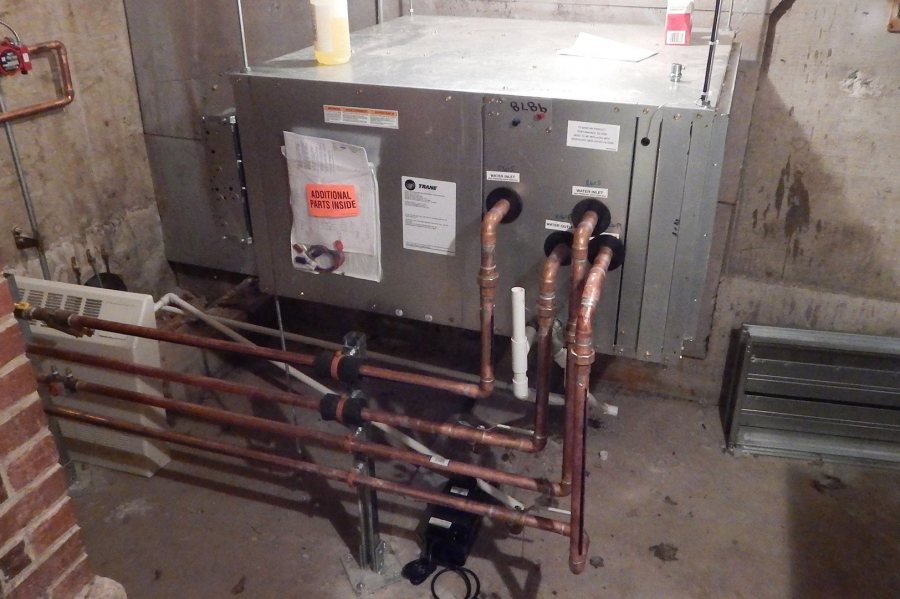 This is one of two new HVAC units in the Den that will bring in, and heat or cool as needed, air from the outside. They replace units installed in 1950, when Memorial Commons was added to Chase Hall. (Doug Hubley/Bates College)

The current project has touched much of the building, but the Den has gotten the brunt of the attention. Technicians for Damon Mechanical progressed by leaps and bounds (unfortunately, we took no pictures of the leaping and bounding) through July.

They put two new air handlers into closets, flanking the Den entrance facing the Library Quad, that had housed the 67-year-old original units. (The obsolescence of those old warhorses, in fact, is what precipitated the entire project.) The air handlers pull fresh air into the building and heat or cool it.

Damon also hung from the ceiling several fan-coil units that, employing so-called hydronic technology, use hot and cold water to heat or cool the ambient air. Four were installed in the Den’s public area, along with one each in the Den prep kitchen and staff lounge, sultry spaces that had never been air-conditioned. 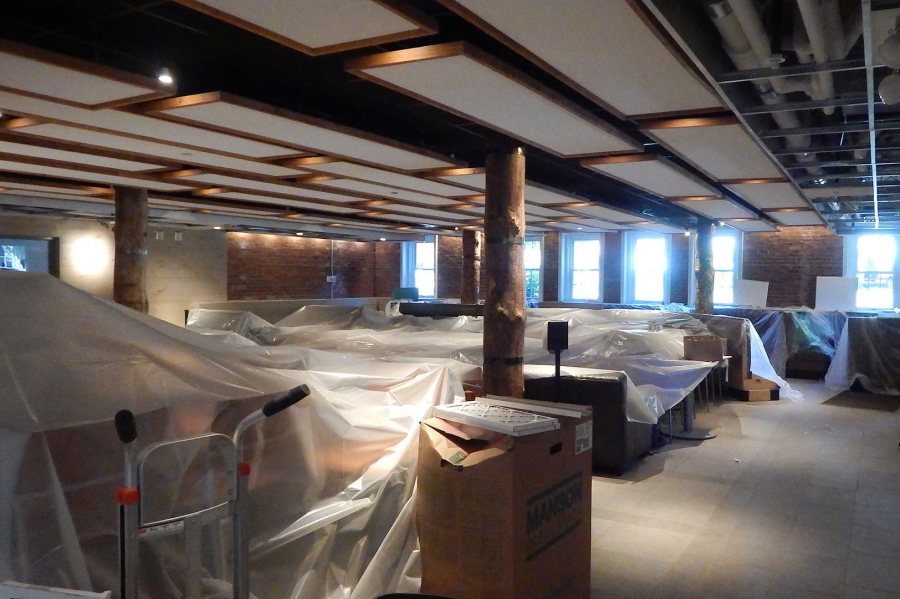 Much of the HVAC work in the Bobcat Den had been completed when this photo was taken on July 26, 2017. (Doug Hubley/Bates College)

When we visited on July 26, all the pipes connecting the fan-coil units had been fitted and the wiring was about done. Sheet metal workers were fabricating air ducts that will move air where it’s wanted, and boxes of pipe insulation awaited installation.

In short, Rasmussen expected all the mechanical work in the Den and environs to be finished this week. Then comes the end game: Jackie’s Cleaning & Maintenance of Lisbon, Maine, will come in to dust and clean floors; the furniture and fixtures will be put back where they belong; and Dining Services staff will come in to sanitize the dining room and service spaces. That will take about a week. 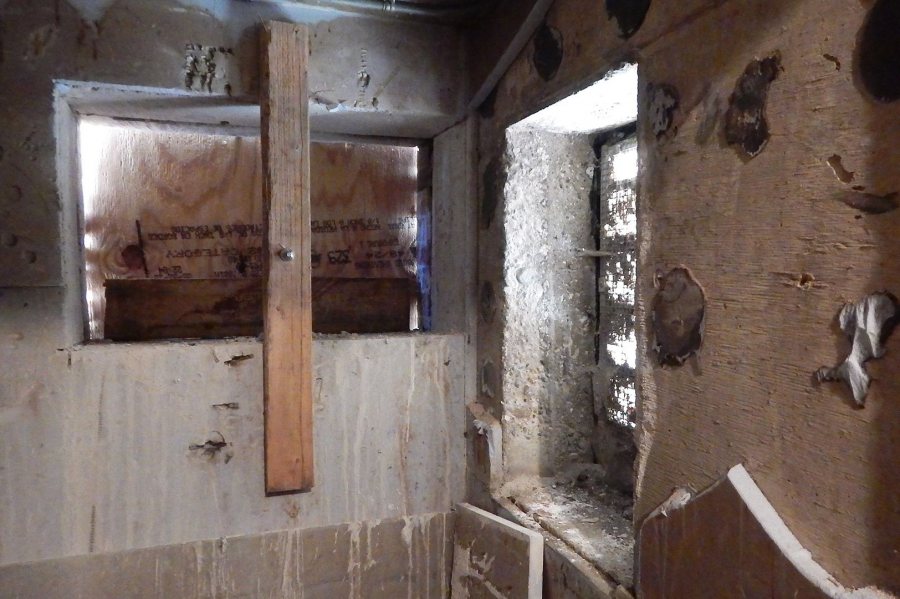 Shown are new and old openings providing outdoor air for one of the Den’s air handlers. The old vent, at right, simply allowed air into the air handler space. Dirt, dead leaves, and other detritus tended to clog it, and it will be closed. The new vent, at left, will be louvered and ducted directly to the handler. (Doug Hubley/Bates College)

Still outstanding is the implanting of sensors and controls for the campus heating control network. Deferred to avoid disrupting Bates Dance Festival classes scheduled in Chase for six summer weeks (the dancers are noisy too, but at least they have rhythm), that work will be finished after the festival season ends this weekend. Ditto the installation of fan-coil units in Memorial Commons.

Plumbers, meanwhile, have been piping their way southeast from the Den toward the Chase mechanical room, where a new heat exchanger will extract heat from the campus steam loop to feed the fan-coils. (Cold water for cooling the air comes from a chiller that serves several buildings.) In a sort of Promontory Point moment, albeit without the golden spike, that connection was made within the last week. 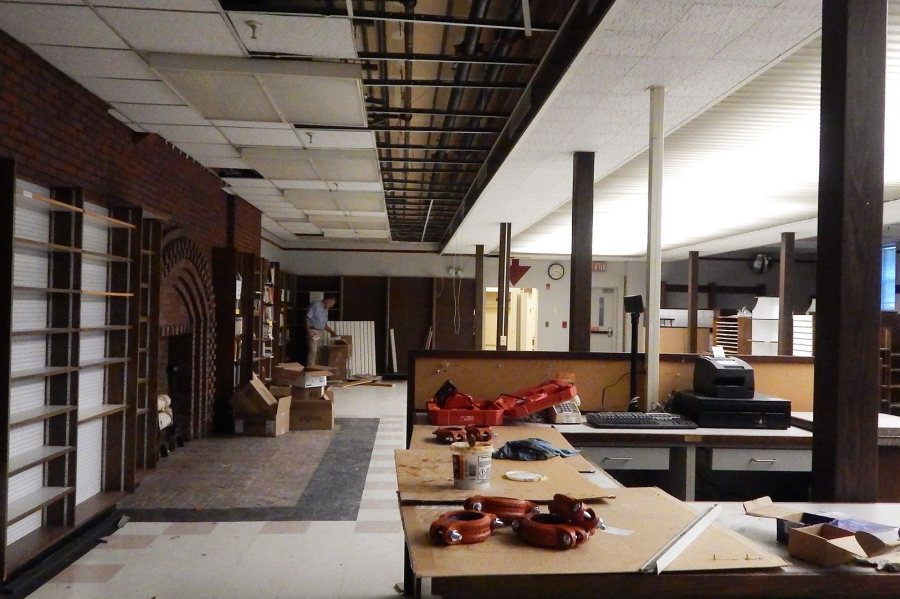 The black pipes at top center will carry water from the Chase Hall mechanical room to fan-coil units that will heat and cool the Den and Memorial Commons. Project manager John Rasmussen is standing by the fiction section of Bates’ former bookstore. (Doug Hubley/Bates College)

The installation of the heat exchanger and related machinery is about half complete, Rasmussen says. With pressure on to reopen the public spaces, “we’ve been trying to get everything done except the mechanical space.”

The history of heat in Chase Hall is nearly as convoluted as the building itself, which has been much altered and added onto during its 98 years of existence. For instance, the failure of a steam pipe from Muskie to Chase in 2013 cut the building off from campus steam until last year, when the bad pipe was replaced. During the intervening years, a backup boiler in Chase heated the building.

Whatever the primary heat source, campus steam or backup boiler, two different technologies have been distributing warmth throughout Chase for years. A heat exchanger installed about 15 years ago provided hydronic heat to the older section of Chase, facing Campus Avenue, while radiators driven directly by campus steam served the Den and Memorial Commons. 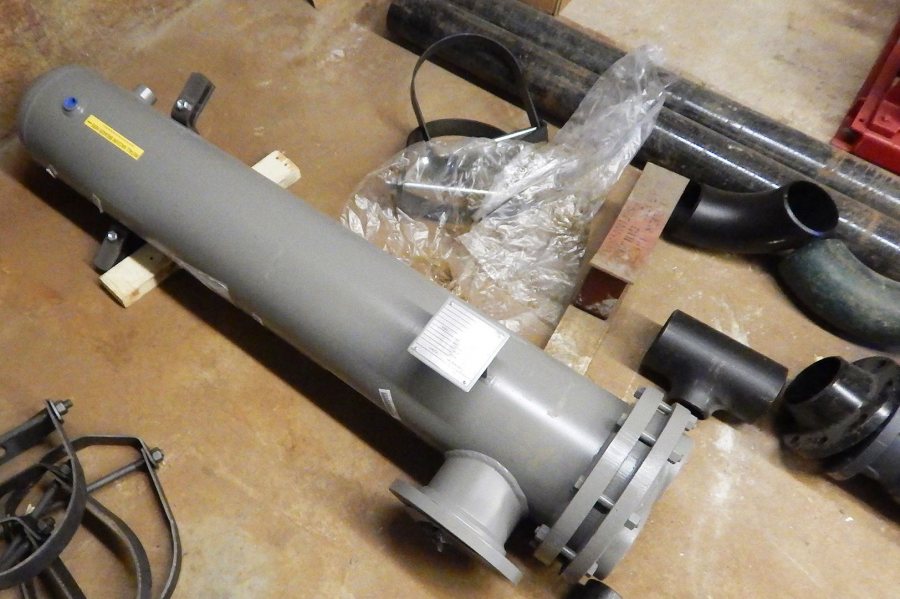 The fan-coil units and new heat exchanger will supplant that system, as well as the Den’s old and feeble air conditioning. So Chase henceforth will be all hydronic. (And just to confuse things even more, domestic hot water in Chase — the water for sinks, dishwashers, etc. — is supplied by a separate heater.)

Much of the new heating equipment has been moved into the mechanical room — two red-painted pumps that will circulate water for heating around the building, the deceptively plain heat exchanger, a large expansion tank that will buffer the water pressure created as cold water, heated by steam, expands. But Rasmussen expects that it will take most of September to finish connecting and testing the machinery.

That means the new air treatment system will likely not come to life until the end of September, “hopefully by the time we need to turn the central steam plant on.” And so, just as Den fans have had to delay gratification until late summer, we may not get to experience the comforts of an effectively air-conditioned Den until late spring.

Can we talk? Campus Construction Update welcomes your questions, memories, and comments about campus improvements. Please e-mail Doug Hubley, stating “Construction Update” or “Could you explain that again?” in the subject line. 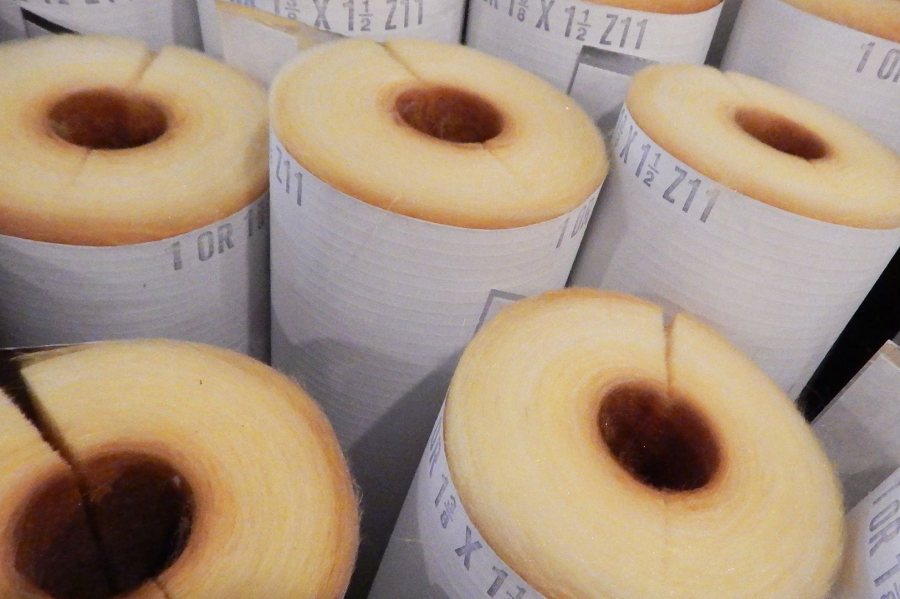