Students returning from time away from Bates gather to reflect

By Emily McConville. Published on September 18, 2017

The students who gathered at Multifaith Chaplain Brittany Longsdorf’s home on Sept. 12 found commonality in different experiences: Whether they had studied abroad or somewhere else, worked or interned for a semester, or taken leaves of absences, they had all returned to Bates after time away.

To address that often-challenging transition, the Chaplaincy and Multifaith Fellows Keenan Shields ’18 and Haley Crim ’19 organized “Feeling Weird Back at Bates,” an event held each semester to help students reflect on returning and to express feelings and experiences that they feel others might not understand.

“I see it as really giving a space for students to not only say the things that they’re not able to say, but also to be around other people who are feeling weird coming back to Bates,” Shields said.

As the event — which is part of programming Bates offers for returning students — began, the students formed a circle in Longsdorf’s backyard.

Shields asked them to introduce themselves and make a “meter” by putting one arm on top of the other. In this way they checked in. A right angle — arm pointed upward — meant they felt good. Arms kept close together meant not-so good. Most were somewhere in the middle.

One word in particular seemed to reverberate: “Alone.”

Shields and Crim then brought out a ball of yarn and asked the returnees to think of a word to describe their feelings of being back. If another person felt the same way, they’d pass the ball while holding onto the end of the yarn, creating a link from student to student.

As the words tumbled out — “uncomfortable,” “grateful,” “awkward” — the yarn went around and across the circle. One word in particular seemed to reverberate: “Alone.”

“Students do feel alone and do feel lonely,” said Raymond Clothier, associate multifaith chaplain. “That’s partly because they develop new selves or new parts of themselves and aren’t sure where those connect when they come back.”

“I hope that’s one thing that they are able to do — to connect with other students and feel like there are other people who can understand or share similar experiences.” 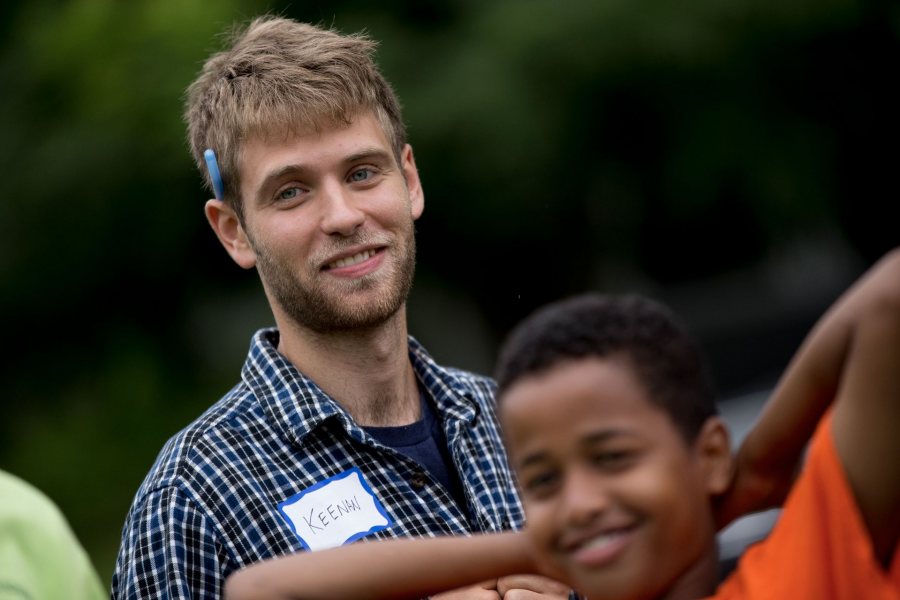 At the end of the exercise, the yarn became a web of common emotions. The students were then invited to further reflect in small-group discussions.

“Maybe we just need to take those fleeting moments and take the risk and open up.”

Themes emerged: Many are now seniors, about to start their theses. Some were processing loss, having left behind friends or host families in other countries, or feared losing what they had learned through immersion in another culture. Others felt a sense of shock coming back to a residential campus after working or living on their own.

In addition to organizing the event, Shields was a participant. An anthropology major from Pittsford, N.Y., he had spent part of the spring semester doing research in Puerto Rico. He said while his experience was valuable, he came back feeling unsettled and sometimes unable to talk about his time away.

Shields said he found others who felt similarly.

“I think that what we arrived at in our group was, maybe we just need to take those fleeting moments and take the risk and open up in those spaces,” he said.

By providing a space where they could talk to others who felt the same way, Longsdorf’s home was a place of reassurance, direction to other resources, or simply understanding.

“It’s a gift the students give to one another to open this kind of space, to be honest with each other and be vulnerable,” Clothier said. “I always feel a sense of gratitude that they’re able to be there in the room with each other.”