With a Bates alumna playing a central role, the college has joined The Nature Conservancy and state agencies in a long-term effort to monitor significant Maine ecosystems.

You could call it a story with seven plots — forest survey plots, that is. Small circles of terrain within larger tracts of protected land, the plots represent distinct ecosystem types. The aim is to give researchers, through periodic inventories of plants and soil, an ecological baseline for comparing conditions in unprotected woods.

The Maine Natural Areas Program, The Nature Conservancy, and other organizations have designated numerous such plots in Maine, maintaining information about them in the state Ecological Reserve Monitoring Database. And now Bates is making its own contribution to this valuable resource. 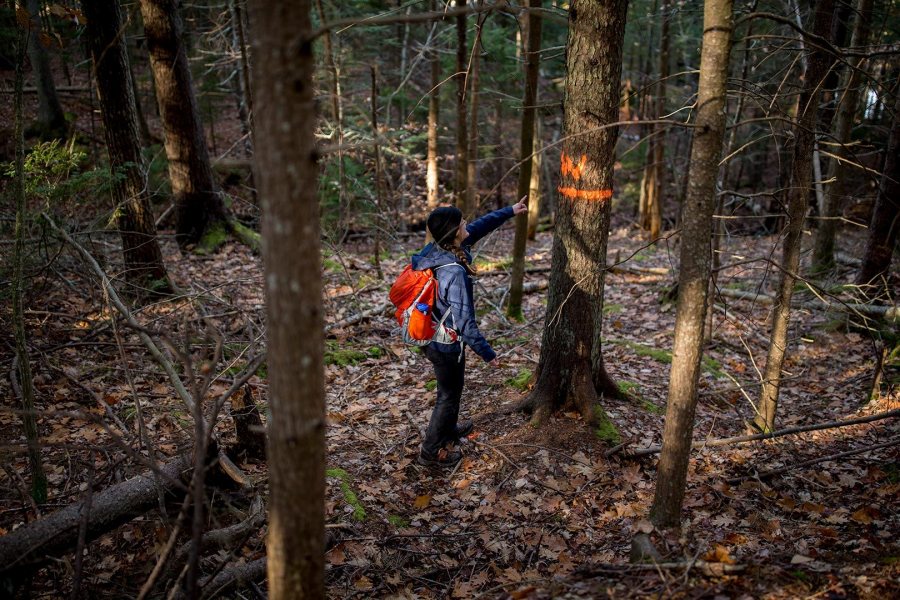 Since last fall, as part of a portfolio of research and outreach projects she has conducted as assistant to the director, Isobel Curtis ’17 has been the point person in creating forest survey plots at the Bates–Morse Mountain Conservation Area, plots that will be represented in that shared ecological reserve database.

“It will be great to add Bates–Morse Mountain to the information that we currently have,” says Nancy Sferra, director of stewardship and ecological management at The Nature Conservancy.

Managed by Bates and used primarily for research, the 600-acre preserve in coastal Phippsburg encompasses a variety of forest systems. For example, there’s a stand of Eastern hemlocks that’s of interest to researchers because it’s infested with the destructive hemlock woolly adelgid.

Established in 2000, Maine’s Ecological Reserve System protects and monitors wild ecosystems meeting certain criteria. “These are meant to be a benchmark of natural conditions — sites that don’t get harvested, so instead natural processes can take their course,” Sferra says. The Nature Conservancy, in turn, designated areas within its reserves to serve a similar function. 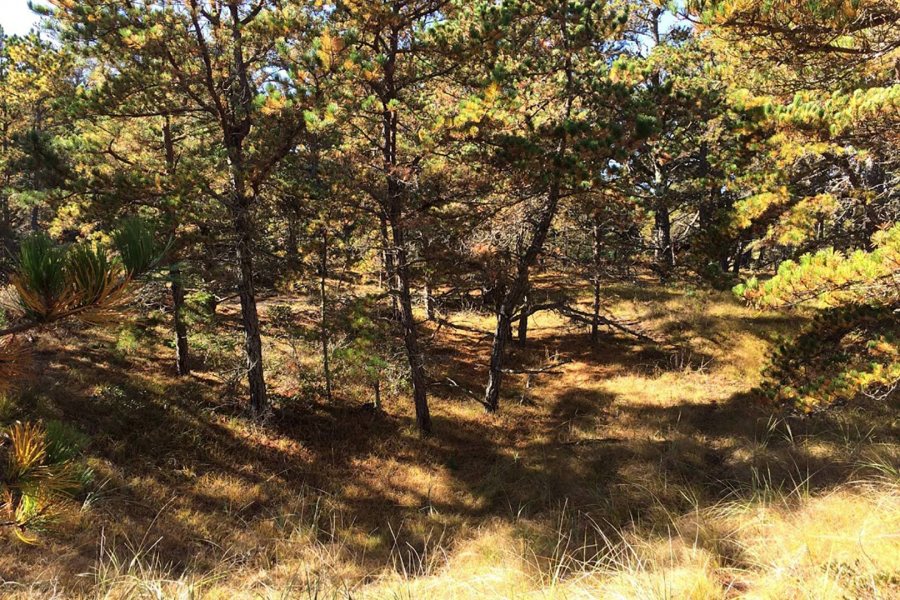 This pitch pine dune woodland at Bates–Morse Mountain is a globally rare ecosystem and possesses a rare beauty, as well. (Laura Sewall/Bates College)

Bates’ participation in the ecological reserve program is especially important, Sferra says, because the coast is underrepresented in the database. Correlating BMMCA data with data from similar plots elsewhere will, in effect, increase the sample size that is available to researchers and increase the statistical significance of their findings.

A double major in environmental studies with a focus on ecology and in biology —she studied the woolly adelgid infestation for her senior thesis in that field — Curtis undertook the BMMCA Forest Survey in her role as assistant to conservation area director Laura Sewall.

The forest survey, says Sewall, serves a variety of purposes. One, of course, is contributing to the statewide reserve effort, “and by virtue of that, we also invite researchers from other institutions.”

Second, the plots will facilitate efforts by Bates researchers. “Having baseline data for distinct types of coastal forests sets the stage for long-term monitoring and study,” she says, “and in particular will help advance our understanding of climate impacts to coastal systems.” 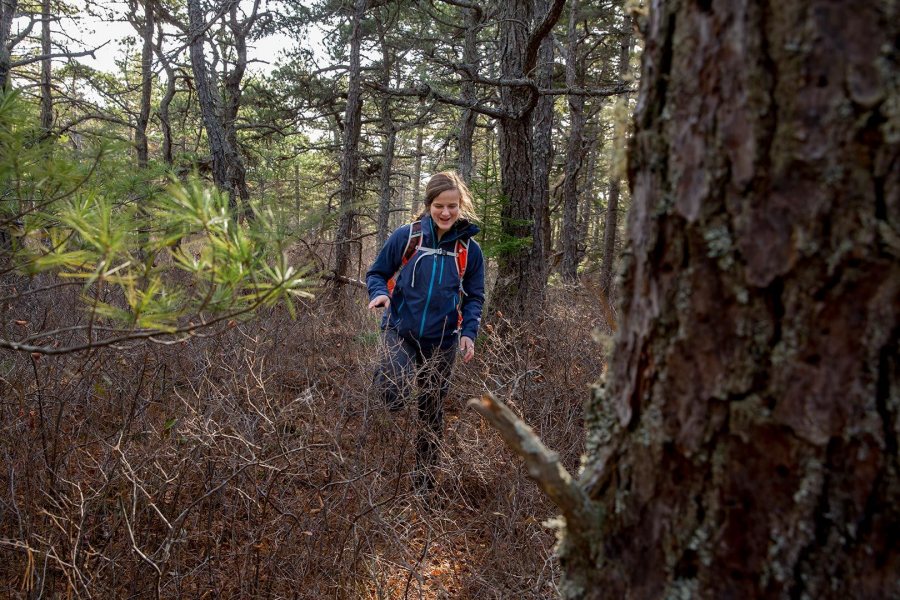 The plots are circles about 15 meters in diameter (or about 36 meters when the subject trees are especially big). To make them findable, there’s a marker at the center of each plot, and geographical coordinates for that point are recorded. Within the plots, Curtis and Sewall assessed tree health and density, the types and quantities of other plants, and soil types and condition. In keeping with established practice, the plan is to re-inventory the plots about every decade.

As for the hemlocks, while no one would argue that the woolly adelgid infestation at Bates–Morse Mountain is a good thing in and of itself, it’s also true that studying that situation for her thesis gave Curtis an entrée for her work as Bates–Morse Mountain’s assistant director. 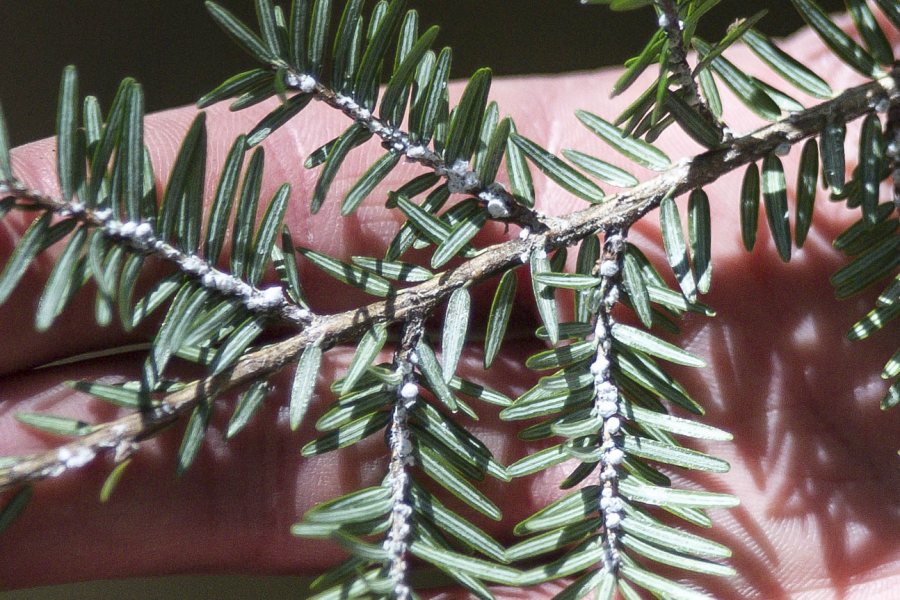 This hemlock branch at Bates–Morse Mountain shows the presence of woolly adelgid. Note the tell-tale white woolly masses on the undersides of the twigs. (Josh Kuckens/Bates College)

Biology professor Brett Huggett, a plant physiologist who studies how trees respond to different types of stress, discovered the pest at Bates–Morse Mountain in 2015. With Huggett as her thesis adviser, Curtis assessed the severity of the infestation, finding that some 60 percent of trees had the bugs but their density per tree was generally light.

That hemlock study led Curtis to another project at the conservation area, as she discovered that there was no formal habitat map of the entire conservation area — a surprising gap considering both the amount of research that Bates does there and the fact that the property has been protected under Nature Conservancy easements for about 40 years. (Bates manages the conservation area with oversight by TNC and the Bates–Morse Mountain Conservation Corporation.)

With an internship from the environmental studies program, Curtis used her senior-year Short Term to create a comprehensive habitat map that she hopes to make publicly available. “The thinking was, if we know what is out there — for instance, we do know there are interesting features such as vernal pools — that might help stimulate further student research,” she says. “And it’s just a great resource for the land managers to have.” 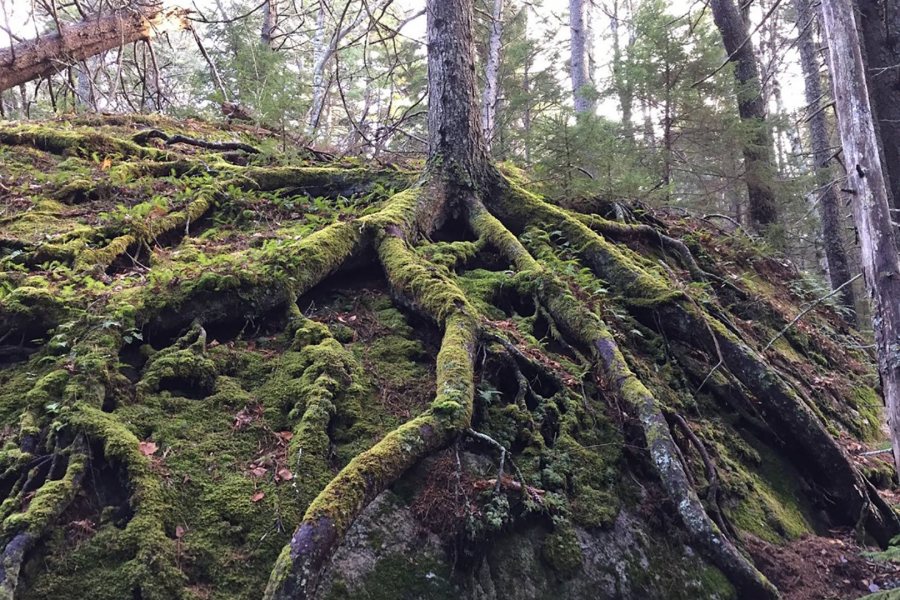 The moss shows what happens when a stone is too big to roll. The setting is a patch of spruce-fir forest at Bates–Morse Mountain. (Isobel Curtis ’17/Bates College)

With a strong representation from the geology department, research at Bates–Morse Mountain tends to focus on the salt marsh and the beach. For instance, geologist Mike Retelle has a longstanding project conducting topographic surveys of the beaches at BMMCA and nearby. Geochemist Beverly Johnson and her students study the potential for carbon storage and sequestration in the salt marsh.

Yet, Curtis says, “there’s not a whole lot of understanding of what is in the upland forested regions,” which are particularly vulnerable to climate change.

Sewall hired Curtis as her assistant in August 2017, and the recent Bates graduate quickly became an expert in the conservation area’s woodlands. In addition to the ecological reserve work, Curtis worked with Bates students on developing a management plan for the adelgid-ridden hemlock grove; developed a “story map” of the entire property displaying locations of previous research; and throughout, engaged with the public about the forest at Bates–Morse Mountain. 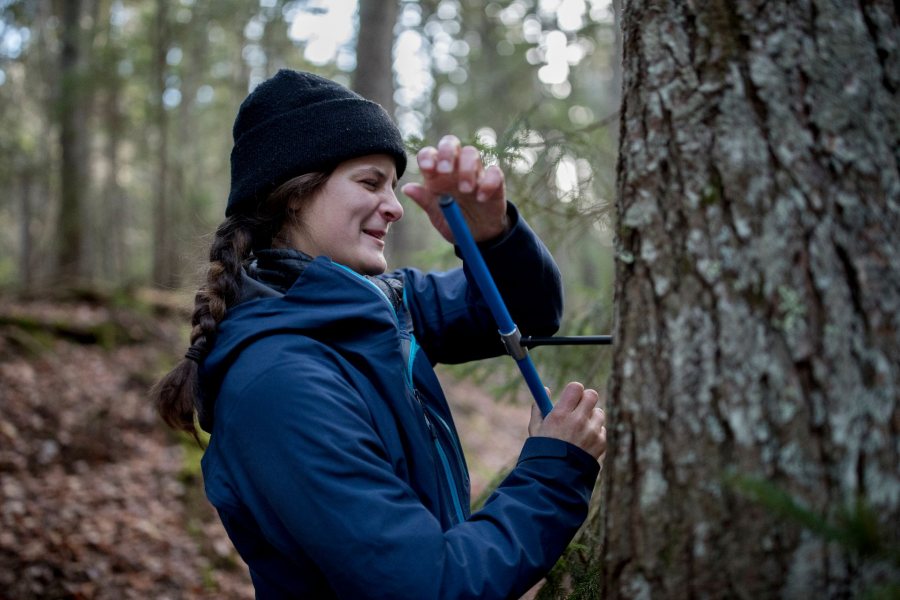 As part of doing a inventory at a forest survey plot, Isobel Curtis ’17 samples a tree core at Bates-Morse Mountain in December. (Phyllis Graber Jensen/Bates College)

Curtis found that straight scientific studies have been the rule over the years at Bates–Morse Mountain — although one student, Ellie Kreischer ’03, made beautiful oil paintings to illustrate her investigation of the zonation and moisture preferences of marsh plant species. “It was really rich in information, but took a completely different form,” Curtis says. “That was really cool to see.”

For Curtis, her time at Bates–Morse Mountain has served two ends. She points out that, one way or another, much of the research done there speaks to climate change — from Johnson’s investigations of “blue carbon” to the beaches being transformed by rising Atlantic waters.

“Climate change is the biggest problem of my generation,” Curtis says. And Bates–Morse Mountain, still in something like a wild state compared with so much of the Maine coast, is proving its value as a laboratory for studying its real-world effects.

The better we monitor those changes, Curtis says, the better we can “understand how to anticipate them and mitigate them and prepare ourselves for them. Understanding how it will impact that peninsula, in particular, is going to be very valuable.”

“The other side of that is education, and getting people as involved and invested in protecting the environment as possible,” she says. “Actually connecting students to the landscape that they’re studying — so not just giving them a data set, but allowing them to go into that space, observe it in its complexity, and hopefully come away with a land ethic.” 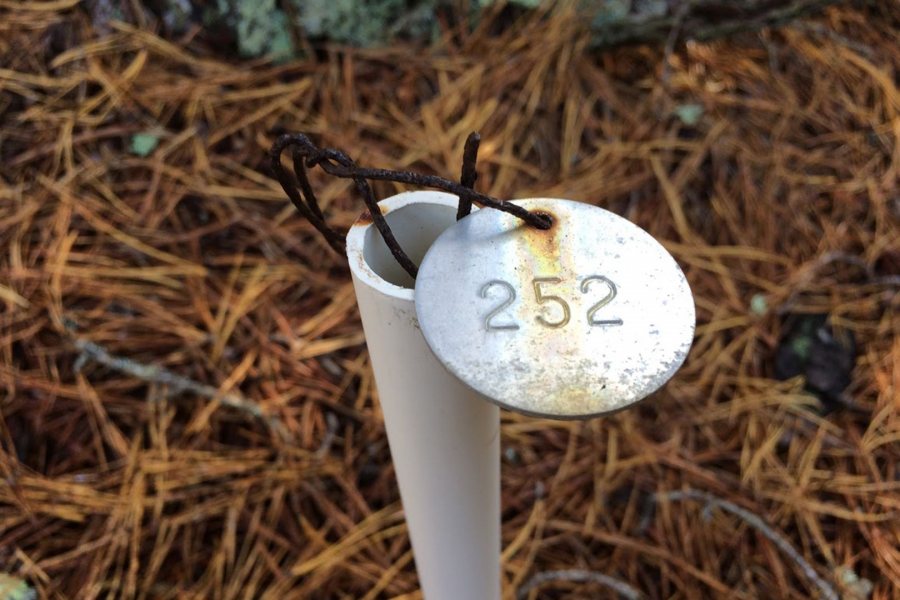 This marker is helping to identify a permanent survey plot that a student created in the Bates–Morse Mountain pitch pine dune woods in 1996. (Laura Sewall/Bates College)