An American woman, especially a suffragist, who tried to rock society’s boat in the 19th century got a label: “A dangerous woman.”

As Women’s History Month comes to a close, it’s time to meet Bates’ most dangerous woman, Ella Knowles, Class of 1884 — a suffragist, trailblazing and highly successful lawyer, and career boat-rocker whose life was a succession of singular female accomplishments.

At Bates, she was the first woman:

After Bates, in Montana, she was the first American woman:

Here are a few things to know about Ella Knowles, her life — and about Bates in the 1800s.

Bates welcomed women from the start. But that didn’t make Bates welcoming to women.

In Bates’ early years, male students didn’t willingly cede power to women, and few women graduated in the early classes. “The prejudice against admitting female students was still strong at the college,” noted a profile of Knowles that appeared in newspapers nationally in 1892.

“Many thought it totally inappropriate for a woman to be educated,” says former Bates history professor Elizabeth Tobin, interviewed for Ella Knowles: A Dangerous Woman, a 1993 Bates documentary produced by the late rhetoric professor Robert Branham. 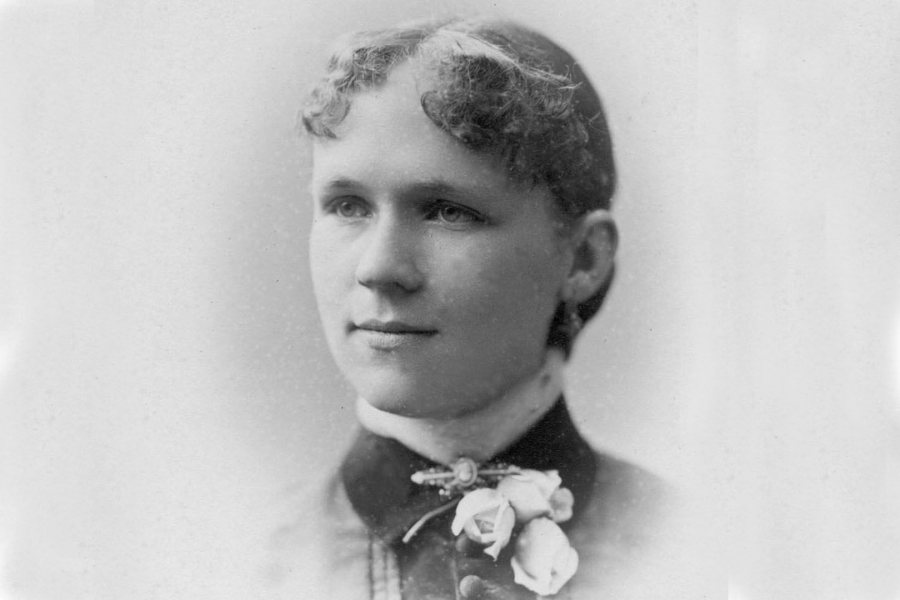 Ella Knowles as a Bates senior in 1884. (Muskie Archives and Special Collections Library)

“They believed it would make it more difficult for her to be a satisfied and successful wife and mother,” which were the roles society expected them to play, Tobin says.

In her second year at Bates, Knowles became the first woman to win the prestigious Sophomore Championship Debate. (In one debate that year, she supported the topic “Resolved: That circumstances make men.”)

To become Bates’ first female debater and public speaker, Knowles “surely would have had to fight,” says Tobin.

From 1993: Then-Bates history professor Elizabeth Tobin talks about the courage Ella Knowles needed to pursue debate and public speaking. The clip is from the 1993 Bates documentary, Ella Knowles: A Dangerous Woman.

“She would have had to prove herself over and over again; she would always have had the sense that if she failed, no woman after her would have been able to do it,” she adds. “There would have been a great deal of pressure — to fight her way through the barrier, then to be standing up there in a position where women were not expected to be.”

She headed West for opportunity after graduation.

Knowles majored in English and rhetoric and graduated with honors. Invited to speak at Commencement, attended by Gov. James G. Blaine that year, she discussed “The Genius of Edmund Spenser.”

Knowles taught school and studied law in her native New Hampshire, then moved to Helena, Mont., in 1888, some say for her health following a bout with tuberculosis, others noting that women in the West tended to have greater opportunities for a career.

Her aspirations were mocked, but she remained indefatigable.

There, she studied for the bar. At the time, she was not considered dangerous, just a fool.

“They all thought my ambition was a joke, a thing to laugh at, and I was made all manner of fun of,” she recalled in a first-person essay published in the Anaconda Standard in 1907. “No one believed that I would ever practice.”

The 1892 newspaper profile of Knowles said that she has “gone through all the various degrees of ostracism which attend the efforts of women to make their way in fields which the men had been in the habit of considering peculiarly their own.”

Women weren’t allowed to be lawyers in Montana, so she got the law changed.

In 1889, she successfully lobbied the legislature (the first woman ever to address a state or territory legislature) to allow women to take the bar exam, and passed with flying colors, becoming one of only about 50 female lawyers in the U.S. — even though she still couldn’t vote in Montana.

Her examiner said he “was surprised to find her so well-read. She beat all that I have ever examined.”

To collect her first fee, she used her Bates-honed rhetorical skills.

Like other aspiring lawyers of the day, she tried to support herself as a bill collector. After repeated inquiries, only one business hired her — and that was to collect umbrellas that had been loaned out from the store. But a job was a job, and Knowles collected two umbrellas in her first foray, though the women who’d pirated the parasols gave her withering looks that “haunted me in my sleep that night.”

When she returned and asked for a 50-cent fee, the store owner tried to stiff her. Using her Bates debate skills, she turned the store into a kangaroo court, appealing to the customers for their support. The owner paid up (and joined in the ensuing laughter). “From that time I was given all of the firm’s bad debts to collect, and was very successful with them,” she said.

“I still have those two 25-cent pieces, my first fee, and they are my mascot.”

This 1993 Bates documentary Ella Knowles: A Dangerous Woman, was produced by the late Professor of Rhetoric Robert Branham and features interviews with, among others, former Professor of History Elizabeth Tobin. The film’s piano music was arranged by Eliot King Smith ’91.

There was no self-pity in Ella Knowles.

“When I first began the practice of law, I was taken as a huge joke, and I could have sat in my office to this day and would not have had a case,” she wrote in the Anaconda Standard. “But I didn’t sit in the office; I went out and got my business to start with, and soon business came to me in abundance.”

She won her first case as a lawyer using forensic tools.

Her first case had Knowles representing a client who said he was owed $5 in back wages after quitting his restaurant job. Refusing to pay, the restaurant produced a ledger that seemed to show no back-pay owed.

“I had no evidence to offset the book,” said Knowles. “I felt my first case lost, when an inspiration came to me.”

With a magnifying glass, she examined the ledger. “The glass won the case for me, for it disclosed that some figures had been erased and other marked over them, and that the erased figures corresponded with [her client’s] account.”

By 1890, the Lewiston Journal, reporting on Knowles’ visit back home, said that she “has had phenomenal successes for an eight-months’ lawyer.”

She became a major political figure in Montana.

In 1892, Knowles was nominated by the Populist Party to run for attorney general of Montana, only the second woman in American history to be nominated for that office.

On the campaign trail, she became well-known for her rousing, crowd-pleasing rhetoric. Known as the “Portia of the People’s Party,” after Shakespeare’s heroine lawyer, she told one audience:

“Degrade woman, cripple her faculties, hamper her intellectual growth, and the result is a degraded, crippled, or enslaved people. [But] elevate woman, give her full freedom to use the faculties God has given her, not as a matter of favor, but as an act of simple justice [and the] result is a people strong and self-reliant, intellectual, and valiant.”

Her Republican opponent in the AG race, Henri Haskel, won the election — probably, it is said, because women couldn’t vote. She finished third behind Haskell and the Democratic candidate, though her 11,465 votes surpassed the 7,794 for the Populist candidate for governor.

Facing a crush of work as Montana moved toward statehood, Haskell appointed her assistant attorney general, which made her one of the highest-ranking government officials in the country.

In 1894, Knowles became the first woman to represent a state before the federal government when she headed to Washington, D.C., to argue Montana’s interests in a case involving $200,000 worth of contested lands, winning a federal decision in her state’s favor.

She divorced her husband because she wanted to advance her career.

In 1895, the 52-year-old Haskell married Knowles, then 35, at the iconic Palace Hotel in San Francisco, where, it is said, Knowles was recovering from broken ribs suffered in car accident in Butte.

Haskell was a Mainer with Bates connections. His great-uncle was Seth Hathorn, of Hathorn Hall fame, and he attended Bates’ Latin School, a prep school associated with the college.

By 1895, Knowles was doing quite well as a lawyer. In a profile, The Atlanta Constitution noted that “the census of the country records 110 women lawyers. The most remarkable and successful of this number — one of the most remarkable women in the world — is  Mrs. Ella Knowles Haskell….She is not of the aggressive, assertive type that one would naturally expect to find in the successful feminine lawyer. She is mild, gentle womanly, though full of determination, courage and energy.”

Haskell concluded his term in 1897; the couple divorced in 1901 because, it is said, he wanted to move to the smaller town of Glendive, and she wanted to continue her law career in the city. 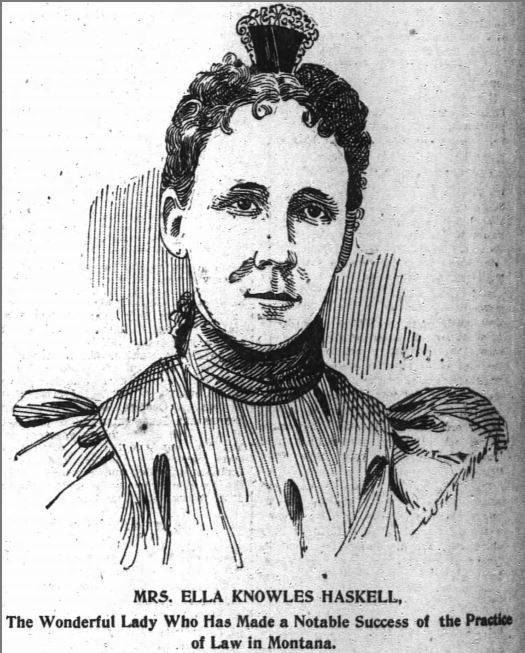 This sketch of Ella Knowles appeared with a profile in the Atlanta Constitution in 1895 with the caption, “The wonderful lady who has made a notable success of the practice of law in Montana.”

A formidable woman, she had the power to throw a national convention “into a panic.”

A delegate to the 1902 International Mining Congress convention in Butte, Knowles and her Montana delegation opposed a plan to reorganize the organization.

Knowles stalled the initiative by using every tool in her law and debate toolbox, and her efforts were so effective that the Los Angeles Herald said that the convention “was nearly thrown into a panic.” Under the headline “Woman Excites Delegates,” the San Francisco Call noted that “for a time it was pandemonium, let loose and the president was…trying to break the table with his gavel…and powerless to restore order.”

In fact, she convinced attendees that she had the votes to overturn the plan: She “took care of her part so well that the strength of the opposition was not known until the vote was taken.” In fact, her side lost 103 to 7, all her votes coming from the Montana delegates. “When it was found that seven persons had been tying up the convention, the astonishment was profound,” noted the Call.

In reporting the story under the headline “Woman as Bluffer,” the Los Angeles Herald noted that the ability of women to “mix things” has never been “doubted by persons with experience in the matter”; what is new, the paper said, are public examples of this “peculiar faculty by feminine citizens.”

“There are usually a large number of poker experts in a western mining congress, but a woman’s bluff made them lay down their cards without going beyond the first ante. Who dares now to say that woman’s sphere is not extending?”

Taking back her maiden name, she moved to Helena, then to Butte, and “prospered in private practice as one of the state’s leading experts in mining law,” according to Wanton West by Lael Morgan.

In 1902, the publication Progressive Men of Montana (irony noted) published a three-page feature on her. She was admitted to practice law before the U.S. Supreme Court, and it is said that she once earned a $10,000 fee, the largest ever paid to a woman attorney at the time. National suffragist leader Carrie Chapman Catt called her “the most successful woman lawyer in the U.S.”

She served as president of the Montana Equal Suffrage Association and, in 1910, attended a suffrage march in London, which may have been part of her around-the-world trip.

She died in 1911 at age 50. Today, a courtroom in the Battin Federal Courthouse in Billings, Mont., is named in her memory.