As 15 students of Shakespeare prepare for London, it’s much ado about leaving

As Sanford Freedman’s students lugged their luggage to a staging area outside Rand Hall, the longtime English professor called out to the group: “Remember, 20 kilos!”

Twenty kilograms, about 44 pounds, was the maximum weight of a checked bag, he reminded the group. Anything more and the airline would slap on a big fee.

This was Wednesday afternoon, a few minutes before Freedman and his 15 students in the course “Shakespeare in the Theater” piled into two vans for the first leg of their 23-day Short Term trip to London for theater, exhibitions, and concerts. 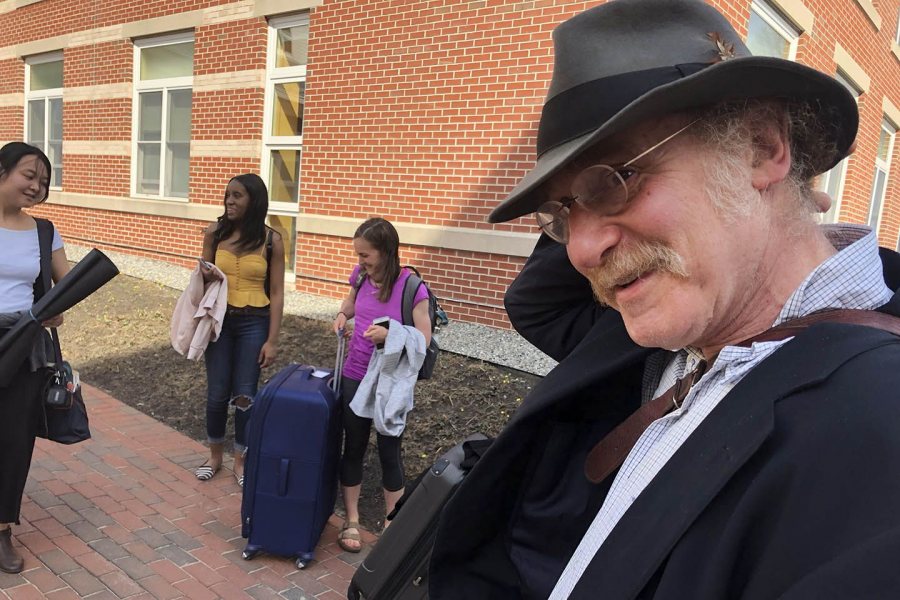 As they gathered along the driveway between Rand and 280 College Street, the students were in the experienced hands of two Bates people with 81 combined years of experience.

Freedman has been an English professor since 1978, while James Reese, on the scene to help with travel logistics from campus to Boston’s Logan Airport, has been a Bates dean since 1977, now with the college’s Center for Global Education.

(Without Reese and the Center, the group would’ve been one fewer: He’d spent the previous week on a diplomatic mission of sorts, cajoling the British consulate to expedite the visa for a student who had applied a bit too late.)

Wearing his trademark fedora, clutching a copy of the London Review of Books, and speaking in metric units, Freedman was all dialed in. He’s had the battered hat “for a long time,” he said. “And I’ve almost lost it about a hundred times,” once in a Greek bar. “Boy, did they shame me when I came back for it.” 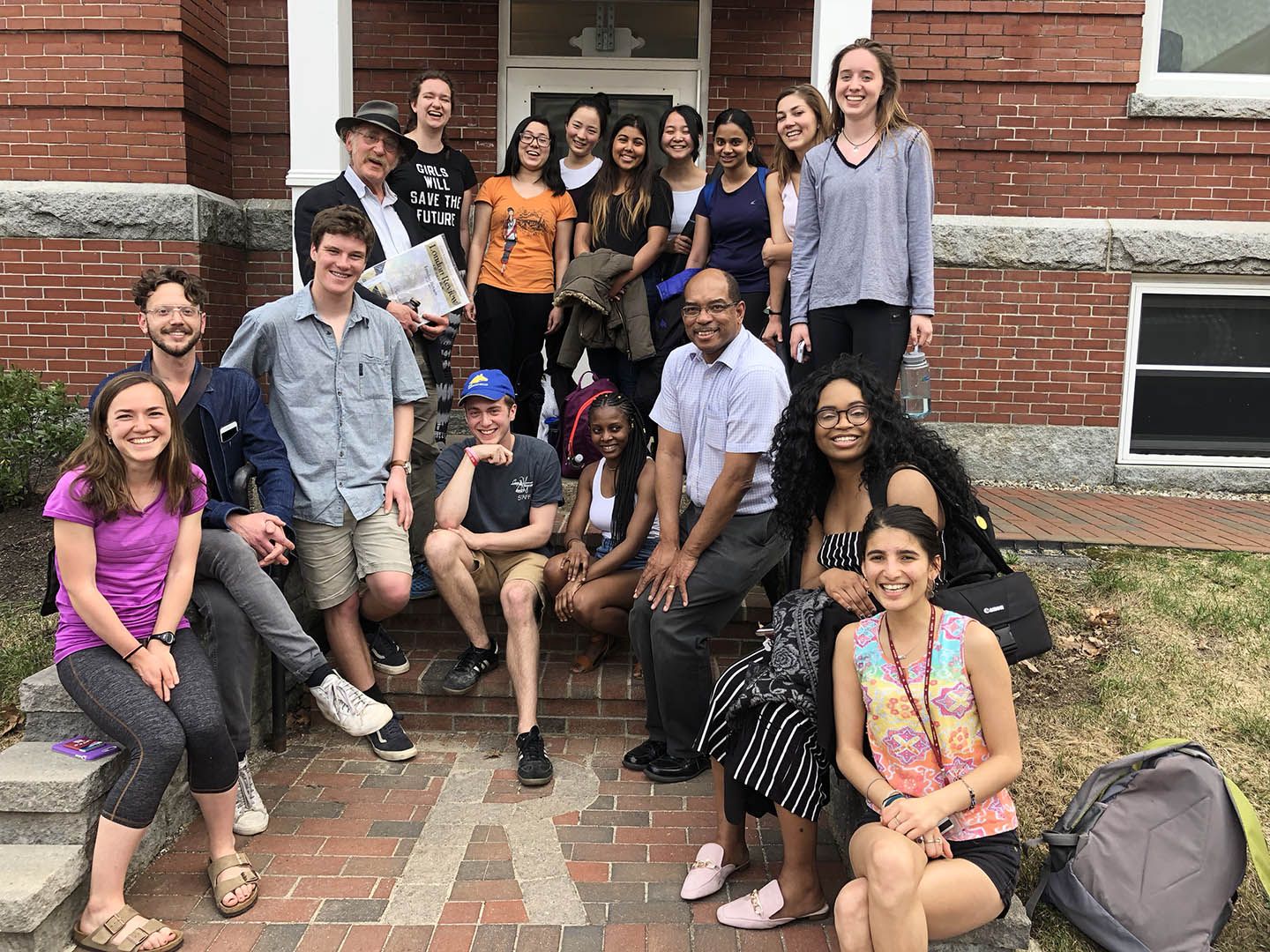 Freedman circulated among the students and their luggage with a hand-held luggage scale. Taking measure for measure, he found a few bags a bit over 20 kilos. Not a problem, he said: “Take out what’s heaviest and put it in your carry-on bag.”

Quickly, students moved copies of The Riverside Shakespeare (5 pounds) from luggage to carry-on. Claire MacKay’s copy was well-worn: Her mom used it to study Shakespeare at Colby in the 1980s.

Freedman has led this trip many times. What’s different each time, he says, is “how each group is getting on,” that is, getting up to speed. During the first week of the term, he said, the 2018 group “has done remarkably well” studying and watching productions of various plays. 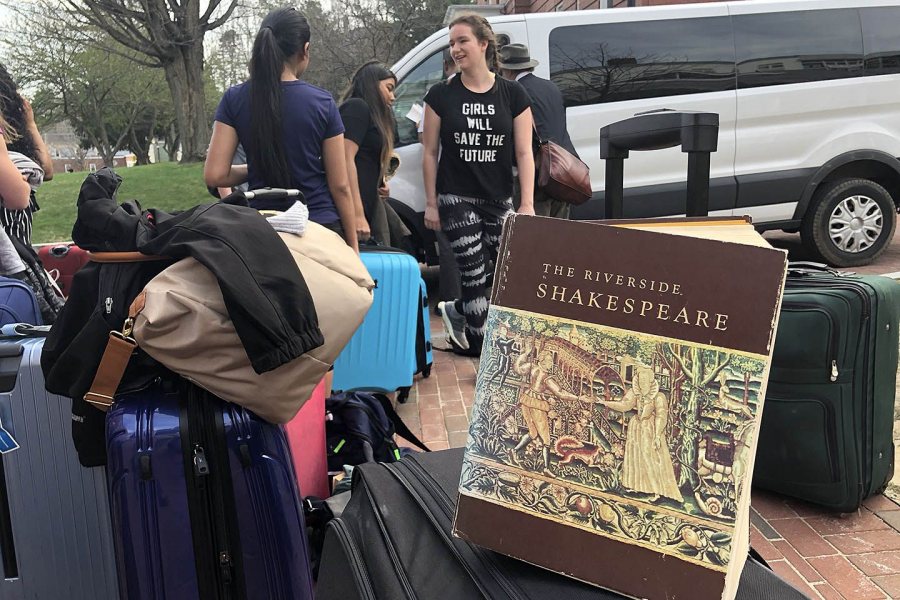 Senior Claire MacKay’s copy of The Riverside Shakespeare was her mom’s at Colby in the 1980s. (Jay Burns/Bates College)

“They know these plays quite deeply, and they know them in textual and linguistic ways — more than just in an informational sense, but in an organization and theatrical sense.”

After an overnight flight to London — a mid-spring night’s dream trip — Freedman’s group will see 11 plays. There will be lots of Shakespeare at the Globe Theatre (on their 12th night they’ll see Merchant of Venice), and modern fare, too, such as The Encounter, a one-man show where audience members don headsets to feel immersed in a story about being lost in the Amazon. 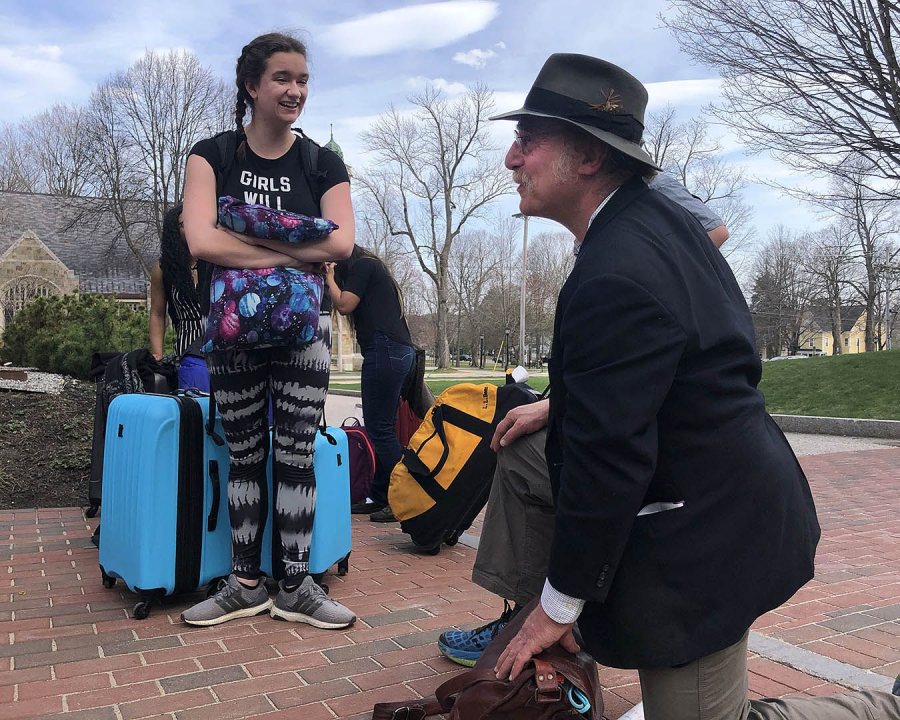 They’ll see two ballets, two musical performances, and five exhibitions: four art-focused and one at the Museum of Natural History, Venom: Killer and Cure. The mix of intellectual fare is important to Freedman: “We don’t want to silence the sciences.”

Meanwhile, most mornings Freedman will hold class sessions at the British Museum. As he notes in the syllabus, “This is one charged experience.” And notwithstanding a few days off here and there, the group will need “enthusiasm and staying power,” he said. “You need endurance.”

And if they have that, well, all’s well that ends well.