Professor of Asian Studies Brian Ruppert, who joined the Bates faculty in 2017-18, is the new Kazushige Hirasawa Professor of Japanese Studies.

Brian Ruppert explains what the appointment means to him:

I am honored to be named the Kazushige Hirasawa Chair at Bates College and to help guide the Program in Asian Studies forward through the next series of steps in its illustrious and dynamic history.

I am especially honored to succeed the late Atsuko Hirai as only the second holder of the Hirasawa Professorship.

The late Kazushige Hirasawa was a true man of the modern era. He was a person who studied here, giving numerous talks to local civic groups, such as the Lewiston Grange and the South Paris Kiwanis Club, and writing articles for The Bates Student. Afterward, he returned to Japan to serve as editor at The Japan Times, become a trusted news commentator, and earn a strong reputation as a scholar of Japan’s foreign policy in the increasingly globalized world. 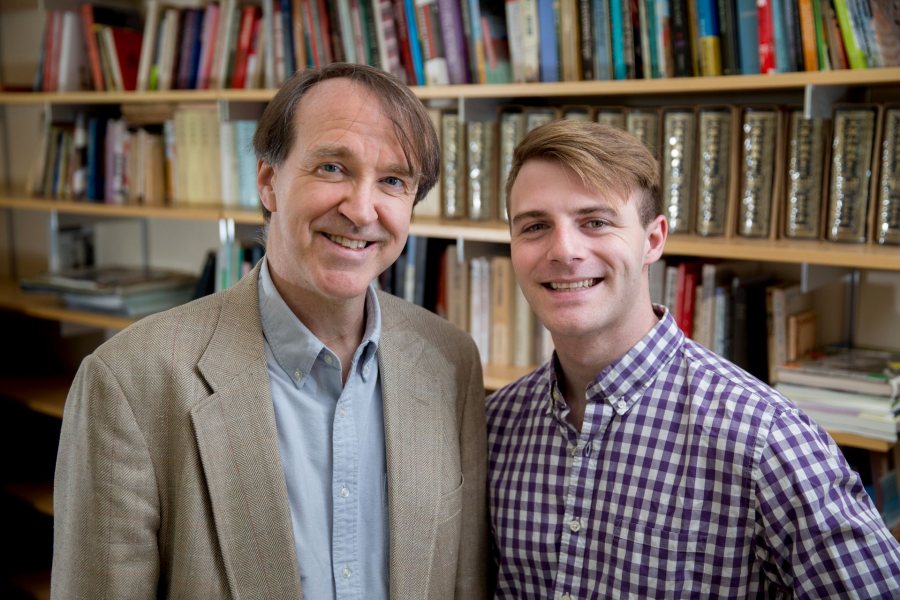 Brian Ruppert, the new Kazushige Hirasawa Chair of Japanese Studies, poses with Garrett Anderson ’18 of Raleigh, N.C., a double major in Japanese and East Asian studies. Anderson, who studied in Japan in his junior year, will return to Japan for a fellowship in the Japan Exchange and Teaching Program. He’s been awarded one of JET’s most sought-after positions, as a coordinator for international relations, who assists local government offices in international exchange activities. (Phyllis Graber Jensen/Bates College)

Thanks in part to the endowment honoring Kazushige Hirasawa and his family, Bates has a great tradition in East Asian studies, including Chinese, Japanese, and Vietnamese cultural studies. The program also supports South Asian studies, all seen within a global perspective. Our program also features excellent programs of Chinese and Japanese language study and of study abroad in East Asia.

This is the third in a series of profiles of Bates faculty members who were appointed to endowed professorships in 2017–18.

About the Hirasawa Professorship

The chair was endowed in 1985 in memory of Kazushige Hirasawa ’36, Litt.D. ’61, by his widow, Asako Hirasawa P’65, L.H.D. ’88, and friends and colleagues in the United States and Japan who wished to honor his memory. The chair seeks to strengthen teaching and learning in Japanese and East Asian studies, and to recognize a faculty member whose teaching and research perpetuate the cross-cultural understanding that was the focus of journalist Kazushige Hirasawa’s life and work.

Asako Hirasawa passed away on March 5, 2018. The Hirasawas’ daughter was the late Yoko Hirasawa Munakata ’65.

Brian Ruppert, who chairs the Program in Asian Studies, joined the Bates faculty in September 2017. He comes to Bates from the University of Illinois at Urbana–Champaign, where he chaired the Department of East Asian Languages and Cultures and, in 2016–17, directed the university’s Year in Japan program.

A scholar of Japanese Buddhism and other premodern Japanese religions, Ruppert has conducted research stays in Japan totaling seven years, and he is known particularly for archival research in the Buddhist temples there and for his scholarship, including Jewel in the Ashes: Buddha Relics and Power in Early Medieval Japan, the co-authored A Cultural History of Japanese Buddhism, and other publications on pre-modern Japanese religions in both English and Japanese.

At Bates, he teaches courses on the cultural history of Japan and Japanese religions as well as Japanese language. He is dedicated to helping students explore Japan and its place within East Asia and encouraging students to study abroad in Japan.