For a Nepalese honey hunter’s last harvest, friend and filmmaker Ben Ayers ’99 was there

Last spring, Ben Ayers ’99 found himself 300 feet off the ground, tethered to a cliff in Nepal’s Hongu River Valley. As he tried to operate a video camera, the largest honeybees in the world buzzed around him.

Ten feet away, his friend Mauli Dhan Rai hung from a bamboo rope ladder, skillfully detaching  the bees’ hive from the cliff. Inside was what is known as “mad honey,” whose hallucinogenic properties make it valuable internationally.

The dangerous work was part of an ancient tradition, and Ayers and a documentary film crew, trying not to spin out of control on their ropes, were capturing it on video for the very first time — the culmination of years of trust-building groundwork by Ayers. 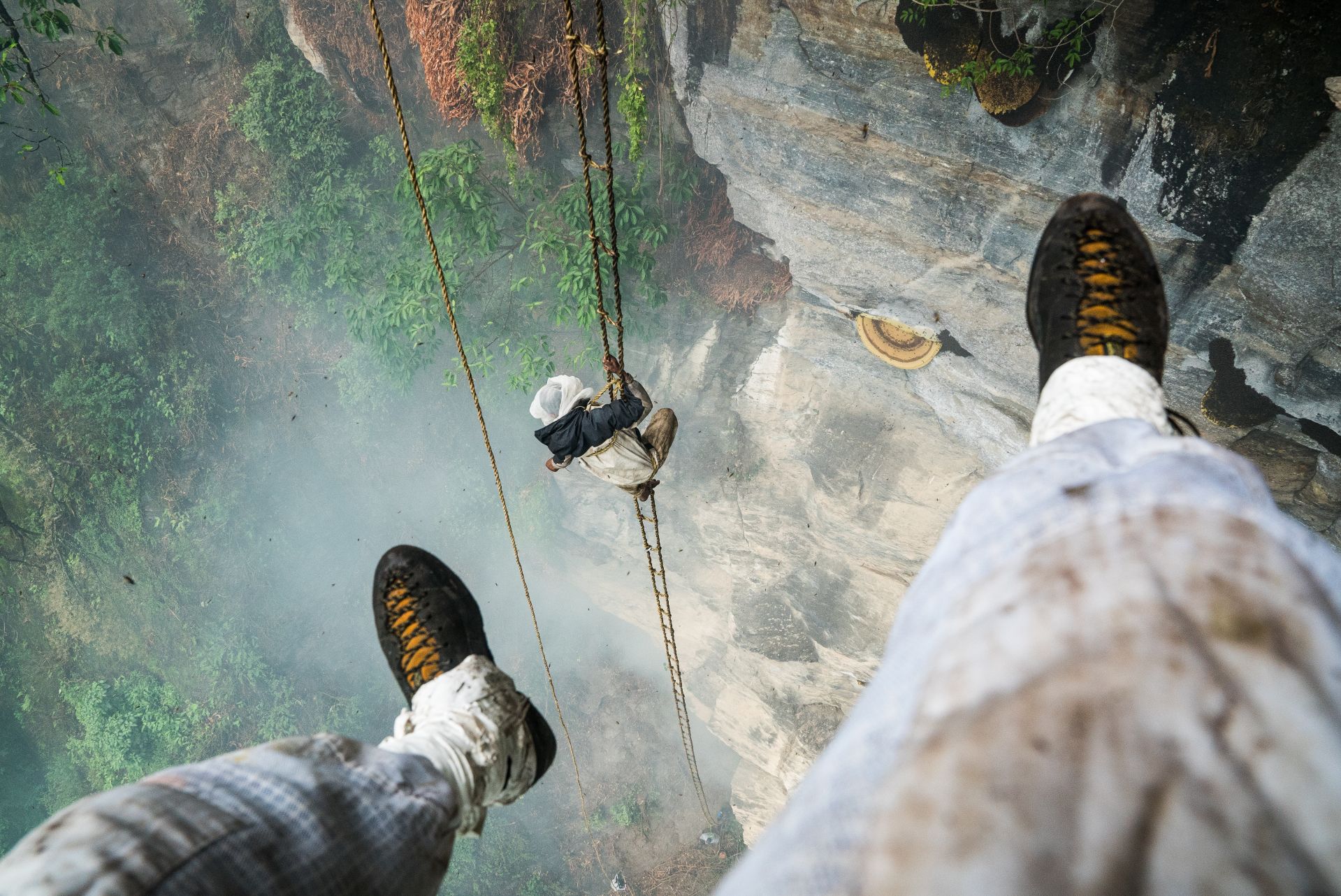 Aging honey hunter Mauli Dhan Rai, on his last honey hunt, climbs a bamboo rope ladder toward a beehive on a cliff face. Below him, a team lights a grass fire whose smoke disorients the bees. (Renan Ozturk)

A significant voice for sustainable development in Nepal, Ayers is the executive director of the dZi Foundation, whose focus on long-term, community-driven development has made the nonprofit one of the most effective in Nepal.

Ayers befriended Rai nearly a decade earlier, and over the years Ayers and dZi had worked on several projects in Rai’s village, Saddi. Nearly from the moment Ayers met Rai, he wanted to film the honey hunter. “I kept going back to that tiny village to win his trust, to be able to make the film,” Ayers says.

And after “literally years of conversations and negotiations” with Rai, community members, and local shamans, Ayers and his team did gain their trust and, finally, approval.

By then, Rai was older — 58 at the time of the filming — and less willing to do the dangerous work of harvesting beehives. So when Ayers and a National Geographic-backed production crew set out to follow a honey hunt, they knew it could very well be Rai’s last.

The resulting film was The Last Honey Hunter, released in 2018. Ayers returned to campus in early May for a screening in the Benjamin Mays Center. 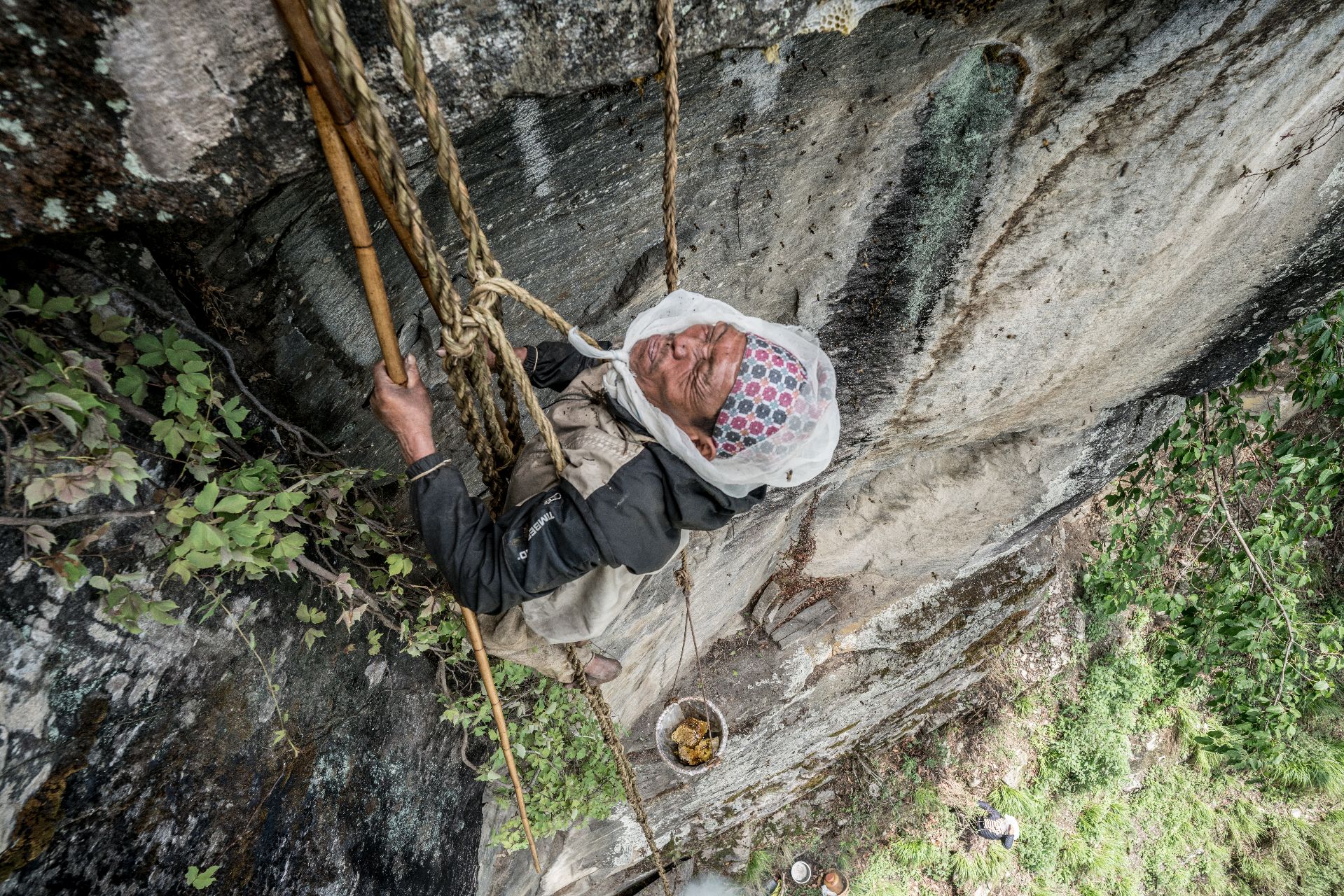 The years of conversations and engagement that made the film possible are the same long game that makes dZi so effective, especially following Nepal’s 2015 earthquake. Many aid organizations there and elsewhere work in the short term, bringing in food or goods during a crisis. dZi works with communities on education, sanitation, and infrastructure for at least nine years at a time.

The approach is to “trust the people who need help,” Ayers said. “Let’s trust that the poor know what they’re doing. We’ve created different systems of helping people overcome poverty through their own intelligence and through their own methodology.”

The Hongu River Valley, where Rai lived and harvested honey, is one of the most remote in Nepal. When Ayers first visited Saddi, it was a week from the nearest road. The Kulung people who inhabit the area live primarily off subsistence farming, with few means to buy and sell goods.

“There are great challenges to being in this life,” Ayers said. “Poverty, sickness, being seven days away from a doctor, are very serious things. But also what you see in these communities is that there’s a need for people to rely on one another.” 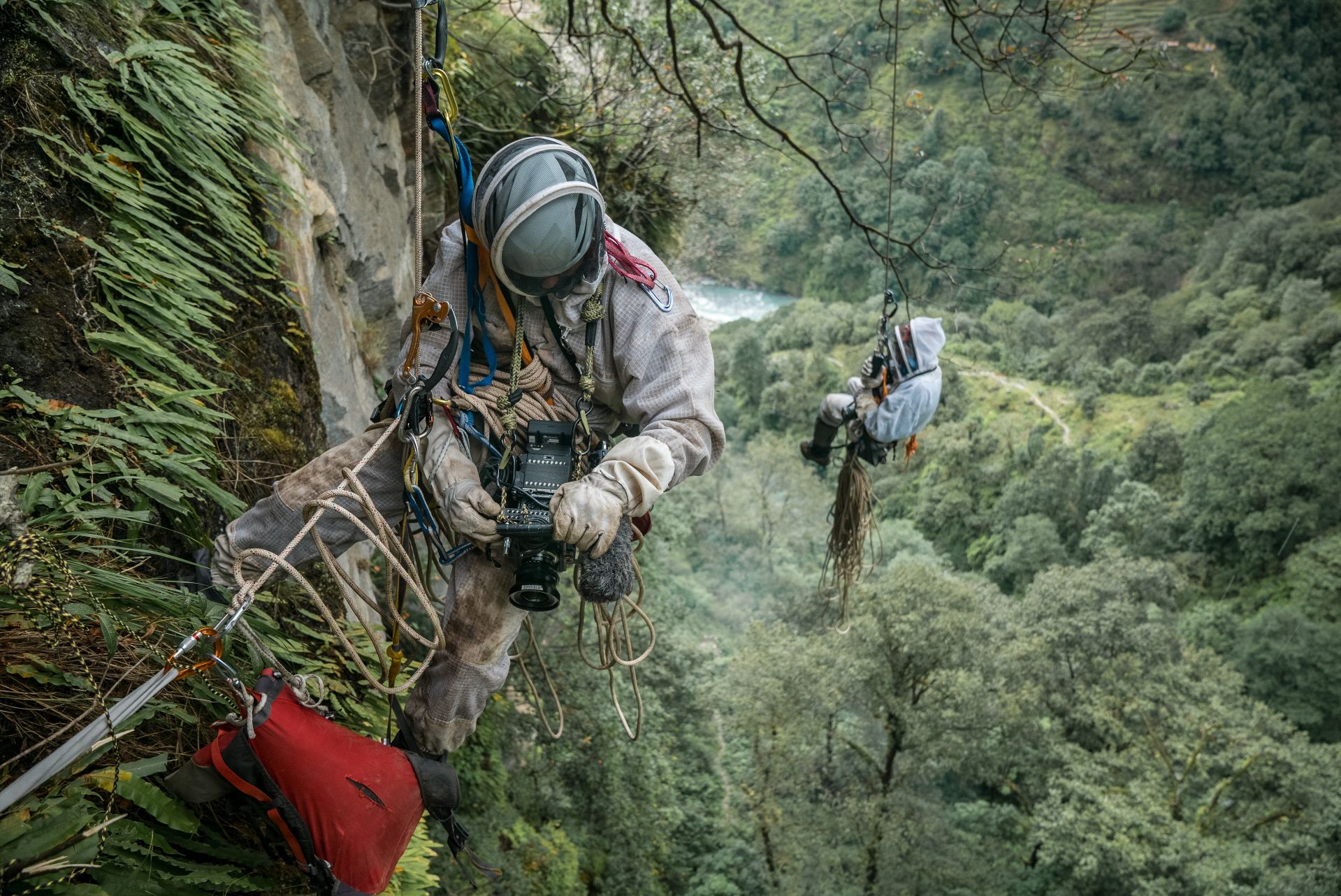 Harvesting mad honey was an important source of income for some community members and for Rai, who Ayers said had a difficult life and was not highly regarded in Saddi.

In fact, though a team supported him in the effort, Rai was the only one allowed to actually harvest the hives, according to the Kulung’s animist tradition. Kulung religious practices reflect a deep connection to the land: A creation story recounts how the first man descended from a nearby mountain peak, and the people believe in a multitude of forest spirits.

“For the Kulung, the whole pantheon of human existence is within their viewshed,” Ayers said. “These are people who are very connected to their land, and they’re connected to the spiritual world that comes out of their land. Shamans travel in between this sort of esoteric world and the human world that we live in.”

It was only with the approval of a particular spirit, given through a dream, that one was allowed to harvest honey. Rai had the dream as a teenager and had harvested honey ever since. 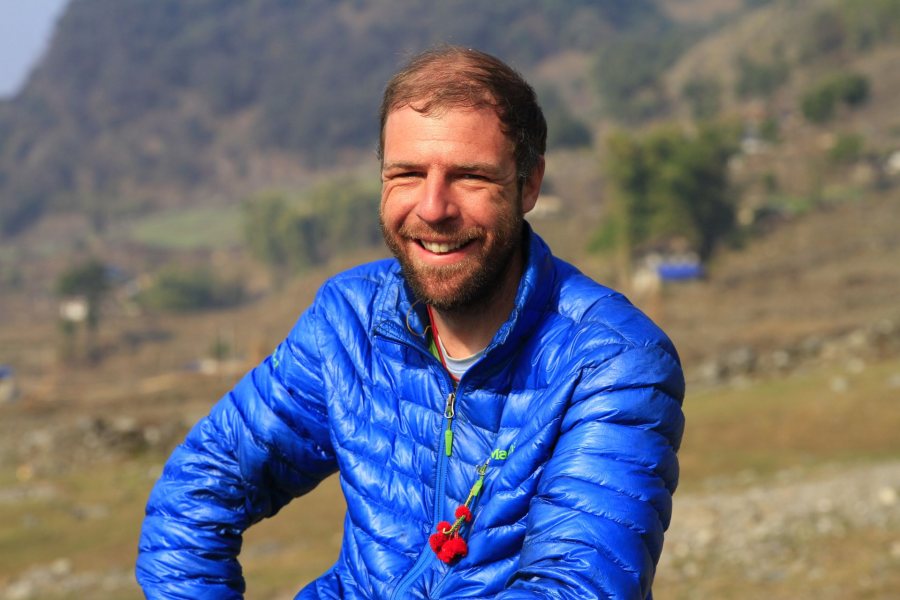 (The honey itself causes hallucinations, along with vomiting and diarrhea. “There are better ways to spend a weekend,” said Ayers, who has tried it himself.)

Twice a year, Rai and his team of helpers performed a ceremony with a shaman and then journeyed to the cliffs, where Rai would spend three days cutting pieces from the hives. He sold the honey and beeswax to a local trader, who passed it out of the village and Nepal.

It was exhausting, dangerous work, and by the time Ayers was trying to make a film, Rai knew his honey-hunting days were winding down.

Ayers returned to the village periodically over the years, getting to know Rai and his work better. In that time, the roads got closer and the outside world more accessible, so dZi’s goals shifted from poverty alleviation to adaptation to change, Ayers said. 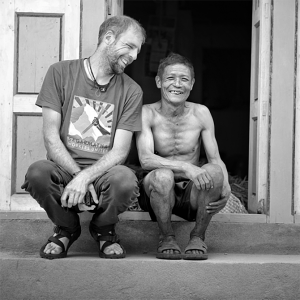 The people in the village, many of whom were initially afraid of disturbing the spirits in the forest, also warmed to the idea of a film crew accompanying Rai on a honey harvest. Rai himself liked the idea, but “he didn’t think I could do it,” Ayers said. “He didn’t think we could get ropes up there, that we were weak.”

Reflecting on his early work in Nepal, Ayers admits that “there was a part of me that very much wanted to be the white savior.” He liked spending time in Nepali communities, and he wanted to be the one solving their problems.

An English major at Bates and “one of the Outing Club kids,” Ayers first went to Nepal during a study-abroad program.

This Himalayan country is a popular trekking destination, and trekkers hire local porters to carry their gear. Ayers became interested in the porters’ lives and even tried to become one for a short time, he told the audience at the Bates screening.

“It was a real revelation for me to realize that the people I was walking with, these porters who had so much less than I had ever been given, had the same intellectual wealth that I did,” he said. “They had the same depth of experience and emotion that I did.

“While it sounds obvious, to get that sense was deeply influential in how I saw the world and how I saw people. I wanted to learn more about that, and I felt it was important for me to figure out a way to give something back.”

“By spending 10 years partnering with communities, you start to do these figure-eights, with one project morphing into another.”

After graduation, Ayers started Porters’ Progress, which advocated for porters’ rights. For years he went back and forth between Maine and Nepal, working in farming and forestry to fund his trips.

He found that swooping in with aid was not only wrongheaded, it was next to impossible. In the early 2000s, Nepal was in the throes of a civil war, with government forces controlling the trekking areas and Maoist rebels controlling rural areas like the Hongu River Valley. Because the porters lived in the country but worked on the trails, they were among the few who could pass between the two territories. 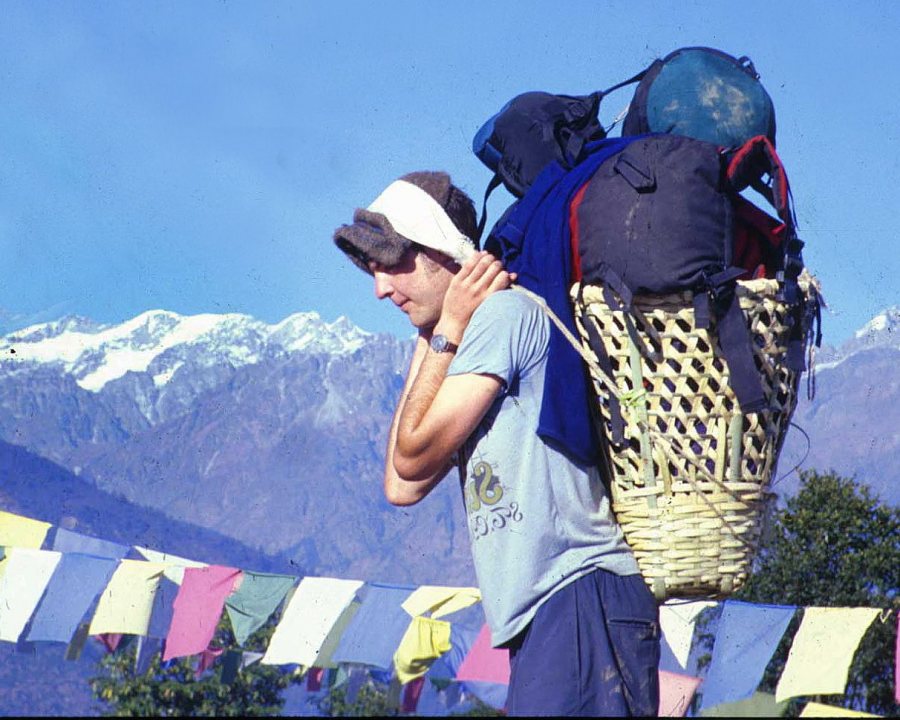 Interested in the experience of porters who hauled gear for climbers, Ben Ayers ’99 started Porters Progress after graduation. (Photograph courtesy of Ben Ayers)

So when Porters’ Progress got a grant, it solicited ideas from the porters on how to spend it, trained them in community development work, and sent them into otherwise-inaccessible communities to carry out the work.

“They proved themselves immediately,” Ayers said. “We were the only organization that was able to work through that situation. That premise of handing over control of the process to the locals is the philosophical basis of the work that we’re able to do.”

Ayers expanded that philosophy when he came to dZi, first as Nepal country director and then as executive director.

dZi’s work usually starts out with one project — sanitary toilets, a school building — but “solving” one problem tends to reveal many more. And one project cascades into others. 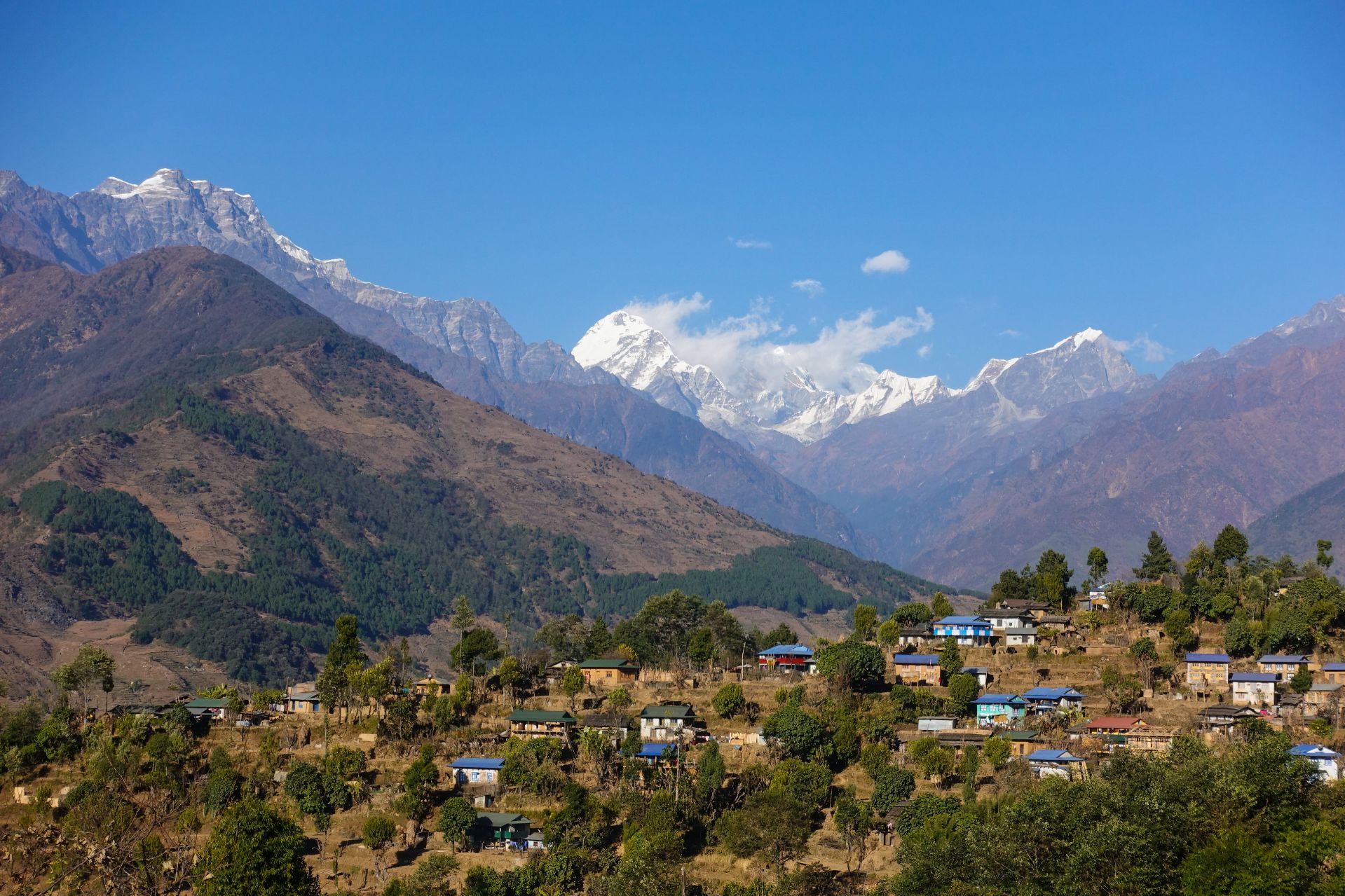 For example: “We do a lot of sanitation programs, building toilets,” Ayers said. “We’ve also pioneered a lot of this technology called ecosan, which is when the toilets recycle urine. You separate the urine out, and that acts as an organic fertilizer. Super cool.

“For us, by spending 10 years partnering with communities, you start to do these figure-eights, with one project morphing into another.”

That, Ayers said, is how you make a sustainable difference in rural communities while empowering the communities themselves.

A side benefit is that you have enough time to persuade a hunter of hallucinogenic honey to let you make a movie about him.

The team that made The Last Honey Hunter — and produced a National Geographic magazine piece — included director Ben Knight; Renan Ozturk, a climber and filmmaker; writer Mark Synnott; and Ayers.

Making the film was “intense,” Ayers said. His team and Rai’s team trekked 12 miles through steep jungle terrain in monsoon season, crossing a river on a homemade bamboo bridge. Then they followed Rai up the cliff to the hives. 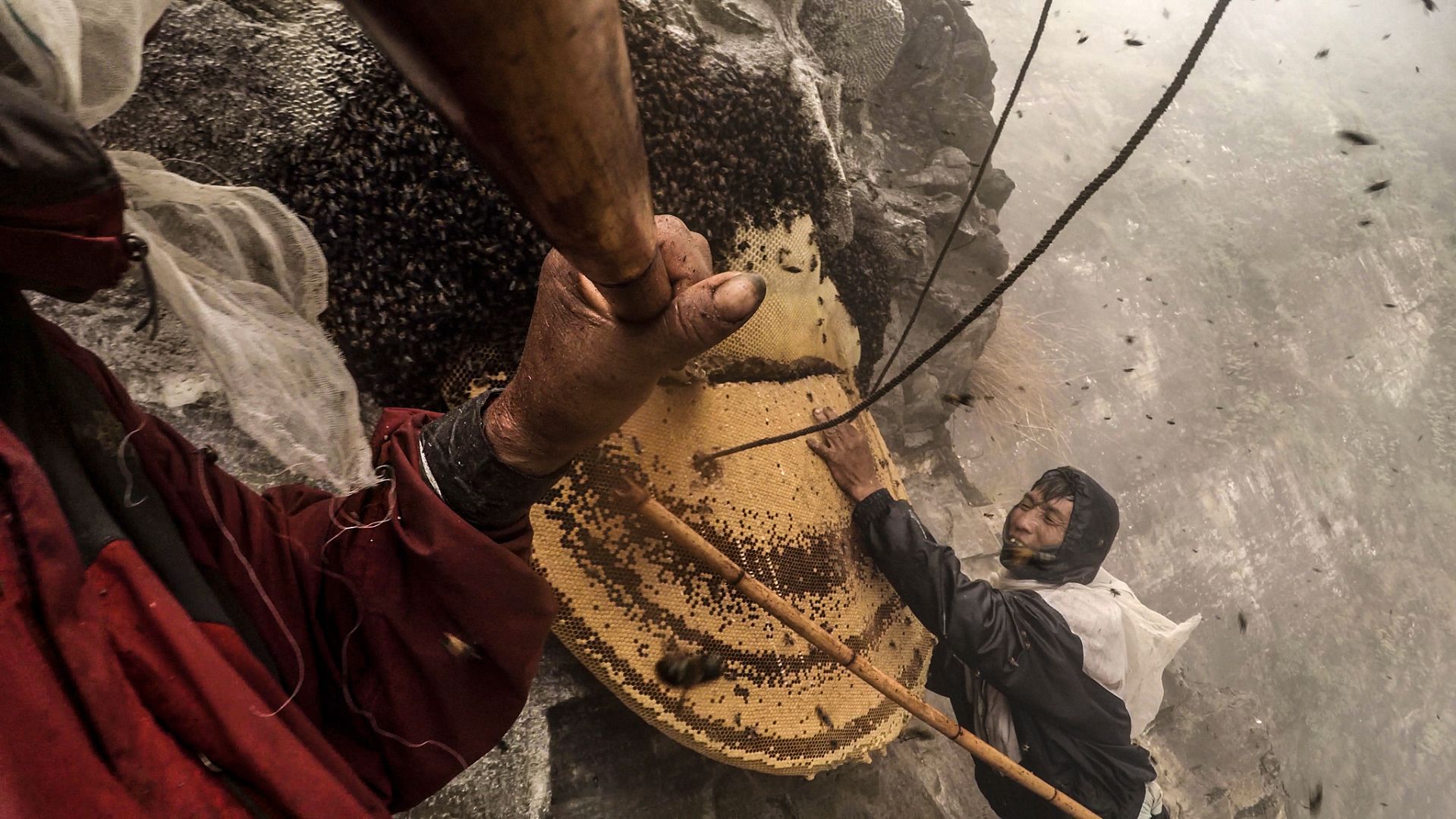 In this image, a camera is attached to a bamboo honey pole held by honey hunter Mauli Dhan Rai as he and his assistant Asdhan, right, cut a hive from the rock. With no safety system, they cling to the vertical wall with one hand while harvesting the honey with the other. This was Rai’s last harvest. (Renan Ozturk)

At first, the filmmakers, dangling freely from the cliff, spun around on their ropes too much to get good shots. The solution was to hang two people from the cliff at once, one acting as “ballast” so the other could stay still long enough to film. Ayers himself made high-angle shots.

The film crew also interviewed them and other villagers and captured intimate shots of daily life in Saddi. The result is a documentary that’s as much a reflection on Rai’s life as it is an adventure story.

“Mauli is the last one in his village who’s had the dream, and he’s too old to harvest,” Ayers said. “The whole narrative flow of the film is wondering who else could do it after him. He’s the last honey hunter.”

The first place Ayers screened the film was right in Saddi. The Last Honey Hunter has since been shown at several festivals and it won an award at the Camden (Maine) International Film Festival, qualifying it for an Oscar nomination.

In the film, Rai reflects that his position does not bring honor in the village. Life in Saddi is also still hard, Ayers said. dZi-guided programs have addressed nutrition and sanitation, but life expectancy is still relatively low, and healthcare is distant.

The harvest that Ayers’ team filmed was indeed Rai’s last. He died in May, shortly before the Bates screening.

“I’ve been fortunate to be able to understand him and know him and be known by him, and be trusted enough to be with this story and be able to share it,” Ayers said.

“Mauli likely is the last honey hunter in that community, and for me to be able to bring him back to Bates, where I feel very strongly my own story began, has been a real privilege.”