At 9:22 on Wednesday night, a blood-curdling scream erupted from within Chase Hall.

Crime? None. Fun? Tons, as the Robinson Players held a murder mystery party in the Little Room, a large social space on the ground floor of Chase.

“Murder mystery is a really good way to get first-years involved in the Rob Players,” says Rebecca Berger ’19 of Bethesda, Md., executive director of the Players. “It’s just an hour, but you still get to act, have fun, and meet new people.” 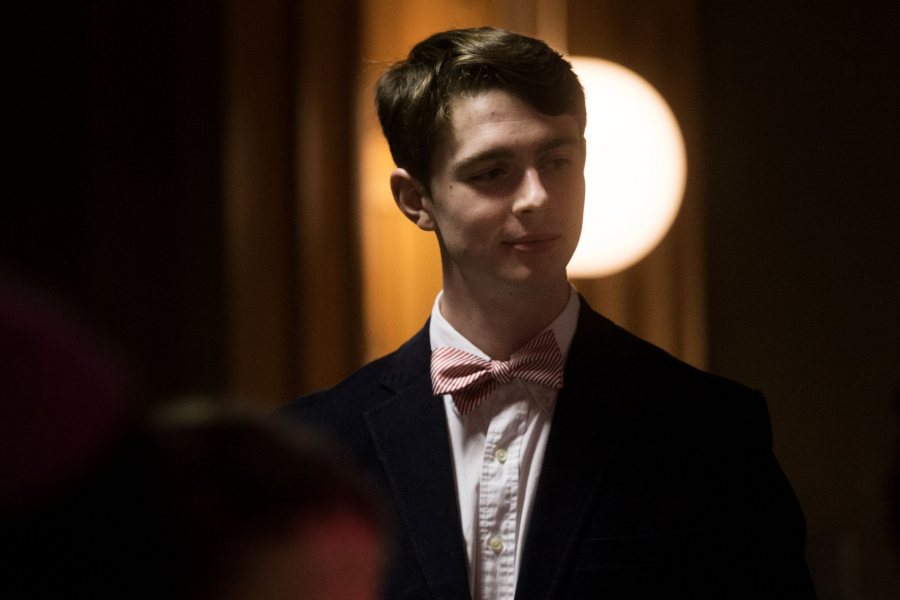 Similar to a mystery dinner theater, in which diners join the sleuthing, the party version brings seasoned actors and newbies together — in this case, veteran Rob Players and first-years — for improvisational acting, storytelling, and creative problem-solving.

The mystery theme on Wednesday was “Set Sail for Disaster.” According to the nifty downloadable kit, the scenario was a pleasure cruise where none of the guests expects “foul weather, the murder of the captain, or a sudden shipwreck on a deserted island in the uncharted Caribbean.”

Julia Gutterman ’20 of Mamaroneck, N.Y., is technical co-director of the Robinson Players, and she was the evening’s host.

“The best part was definitely watching everyone,” she says. “Everyone was having a really good time and having a lot of fun: totally being in it, and being silly.”

“Everyone went full out with costumes and getting into character,” adds Berger.

As president of the Rob Players, founded in 1922, she hopes that events like Wednesday’s help sustain the college’s traditional and distinctively broad definition of “theater community.”

“It’s a welcoming community,” says Berger. “You can come in, be yourself, have fun, and do theater — any aspect of it, acting, directing, tech, stage management — with a minimal time commitment, but still following that passion you have.”

In the video below, the “killer” is revealed and receives the evening’s “Cold Blooded Killer Award”: the boat captain’s wife,  played by Catherine Butler ’22 of Galax, Va.