What’s in a Lewiston Name: Garcelon

The signature athletic field at Bates — home of Bobcat football and lacrosse — is named for Dr. Alonzo Garcelon of Lewiston, an illustrious 19th-century surgeon, civic leader, Maine politician, and one of the earliest and longest supporters of Bates College.

Born in 1813, Alonzo Garcelon lived to age 93. His great-grandfather, James Garcelon, was one of Lewiston’s earliest settlers, a French Huguenot who arrived in 1776.

James operated a ferry across the Androscoggin River just south of town. (Ferries were good business in those days: There was no downtown bridge across the river until 1823.)

Alonzo Garcelon was a graduate of Bowdoin (because there was no Bates College yet…!) who studied medicine in Ohio before establishing his practice in Lewiston.

Through the middle and late 1800s, he became a local and state political leader and an energetic champion for civic improvement.

On June 26, 1855, Garcelon traveled to Vienna, Maine, to sell Lewiston to the trustees of newly incorporated Maine State Seminary, who were casting about for a location for the new school. 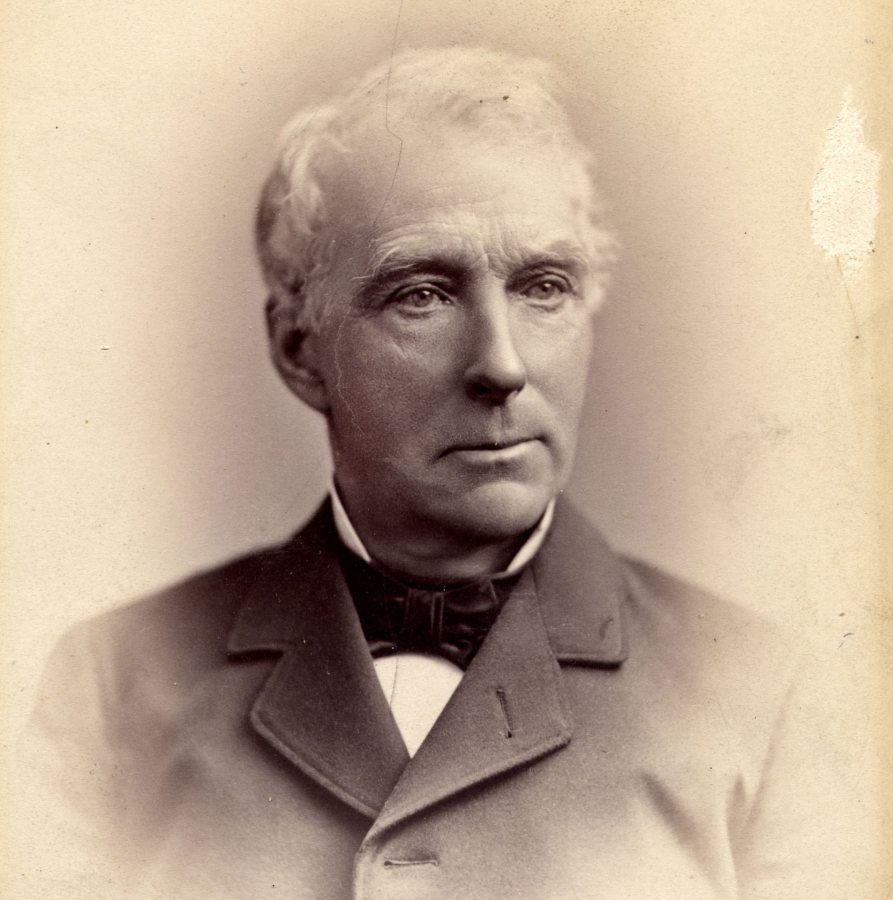 Alonzo Garcelon is perhaps most responsible for Bates College being in Lewiston. (Collections of Maine Historical Society, courtesy of MaineMemory.net, item 5584)

As a member of the Maine Senate, Garcelon had supported founder Oren Cheney’s work to secure a charter from the Legislature that winter. “In a sense [the seminary] was his child,” according to Bates College and Its Background. “He had voted for it; he knew all about it; he had set his heart on its coming to the city.”

In Vienna, Garcelon pitched Lewiston as a city on the move, and he was right: Mills, railroads, and new citizens were arriving and thriving. The population would soar from 3,500 in 1850 to 19,000 by 1880.

An abolitionist prior to the Civil War, Garcelon switched from the Democratic to the Free Soil Party, which opposed slavery in new Western states. A Republican during the Civil War, he reverted to the Democratic Party after the war to protest Andrew Johnson’s impeachment — aligning himself with Johnson, despite the president’s significant racist actions during Reconstruction.

As Maine’s surgeon general during the Civil War, Garcelon was adamant that qualified surgeons be assigned to each Maine regiment. War, he predicted, will bring “shattered limbs and ghastly wounds” to Maine soldiers.

“It would be a burning disgrace to have our soldiers called into battle,” he wrote in a letter to then-Maine Gov. Israel Washburn in 1861, and have “preparations for their comfort” be “inefficient” or “totally unprovided.”

In 1889, when he was 76 and in his 50th year in medical practice, The New York Times noted that Garcelon had traveled 360,000 miles to make house calls (equivalent to 14 times around the world).

In 1896, when he was 83, the Times reported that Garcelon, en route home from a nighttime house call, got out of his shay to help his horse navigate a muddy section of road. He fell 8 feet into an abandoned cellar and, despite a back injury, managed to climb out. 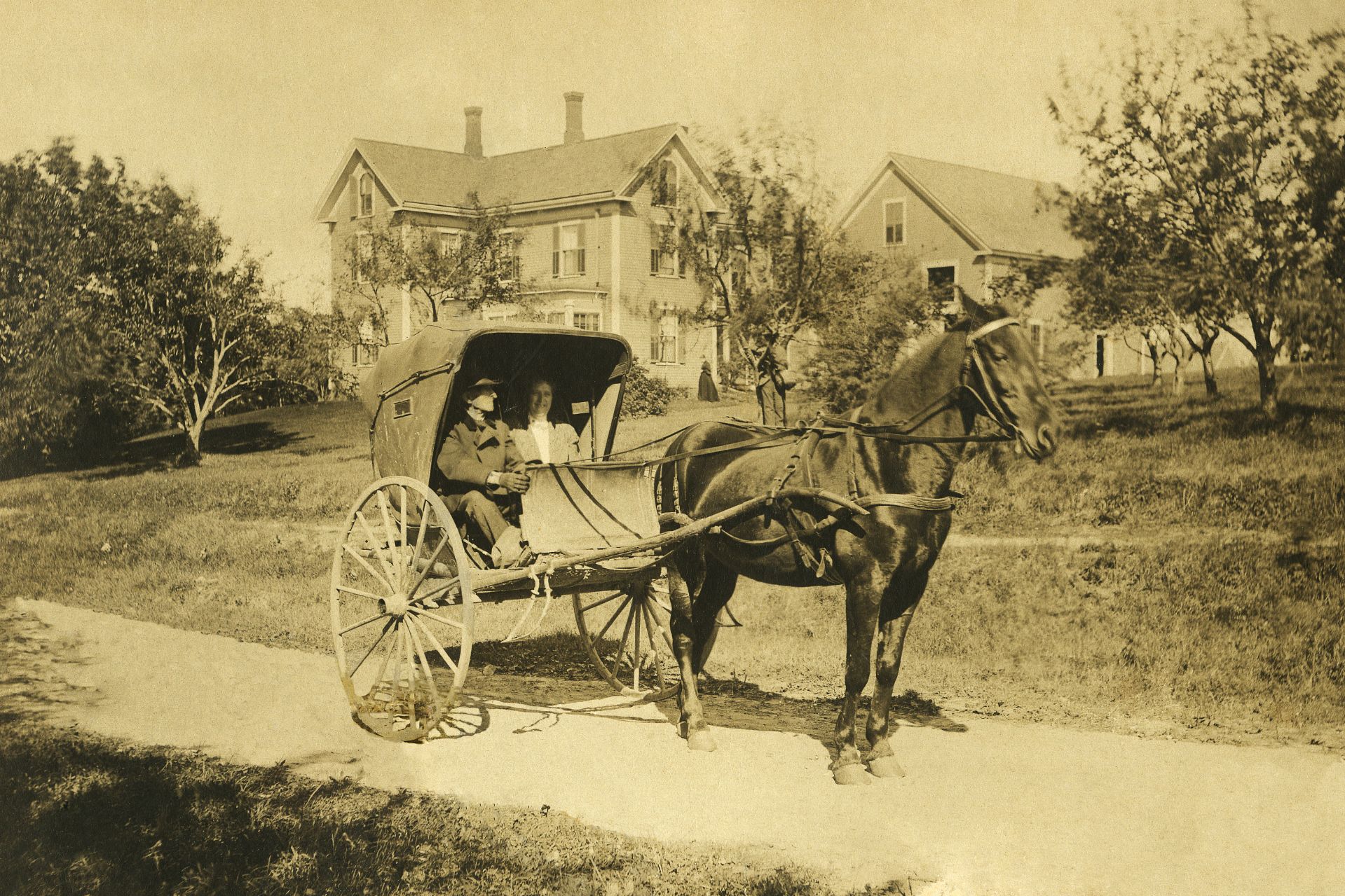 With his daughter in the passenger seat, 92-year-old Alonzo Garcelon poses with his one-horse shay on East Avenue in October 1905. In the background is, likely, the family farm. (Muskie Archives and Special Collections Library)

In 1900, when he was 87, the Boston Daily Globe wrote, “Always a lover of a good horse, he drives one every day that many a man a great many years younger than he would hesitate to handle.”

At age 92, the Globe noted that Garcelon had traveled to Troy, 72 miles away in eastern Maine, to consult on a leg-amputation case.

Given a sombrero while attending a medical conference in Mexico City at age 83, he wore it proudly around Lewiston.

He “towered in character as in stature over the generality of men,” according to his obituary in The Boston Daily Globe.

“Mingle with young people and cultivate their society,” he once said. He added:

“Old age is worth striving for if the striver has a purpose beyond the selfish end of slothful ease.”

Other entities that carry the Garcelon name include, at Bates, the Alonzo Garcelon Society, which provides scholarships, funded by civic and business leaders, to local students from Androscoggin County. 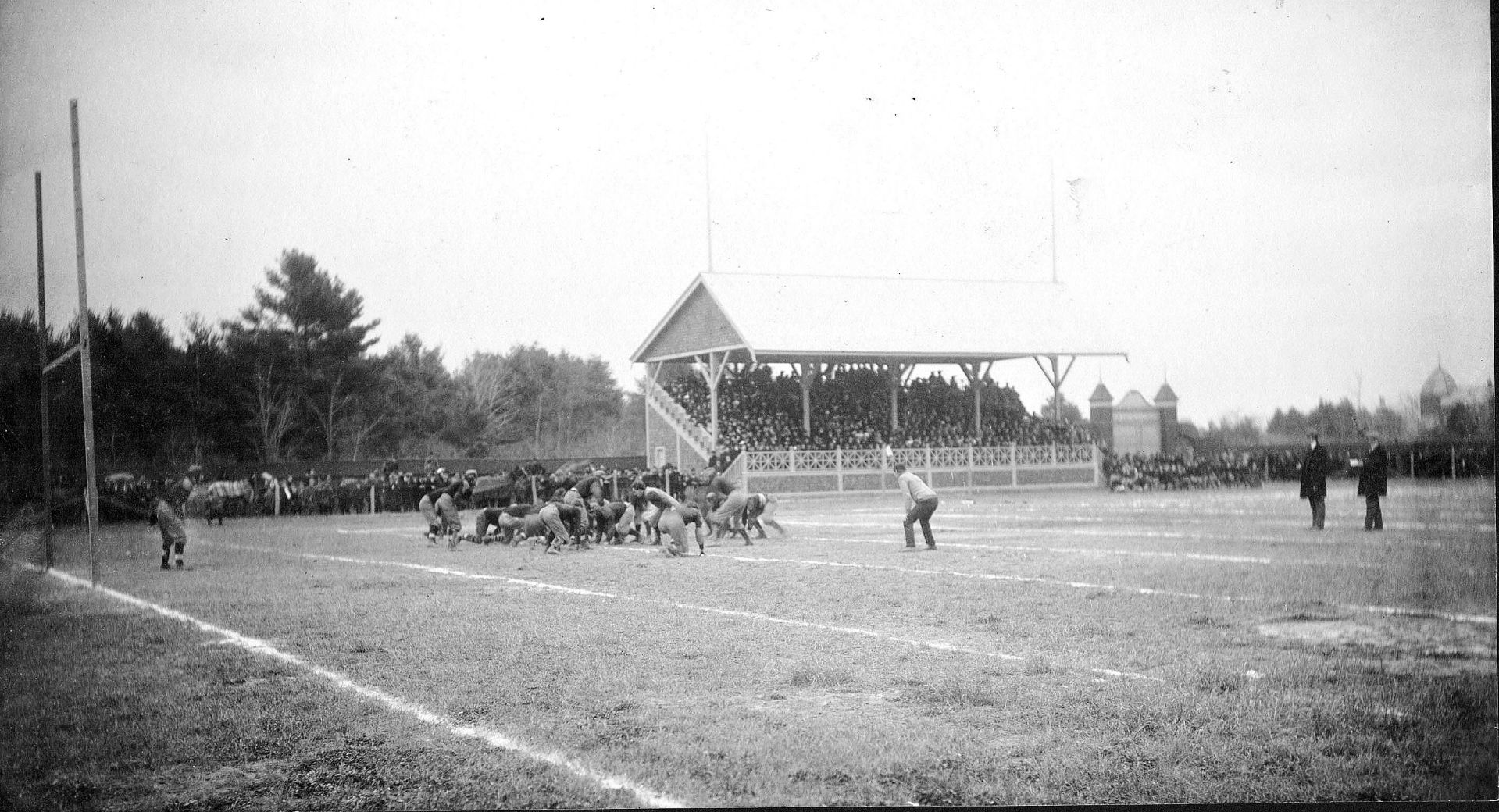 Two years after the 1899 completion of Garcelon Field, Bates and Bowdoin square off in football in November 1901. Bates won, 11-0. (Muskie Archives and Special Collections Library)

In 2008, Alonzo’s great-great-grandson David Garcelon donated an extensive collection of family papers and other materials to Bates.