The Red Sox and Dodgers are in the World Series, just as they were 102 years ago, when Lewiston native Bill Carrigan managed the Sox.

Back in 1916, the Dodgers were Brooklyn-based — they moved to Los Angeles in 1957 — and were known as the Robins, after their manager, Wilbert Robinson.

The two coaches could not have been more different.

Compared with the Dodgers’ rotund and avuncular manager, who was nicknamed “Uncle Robbie,” Boston’s Carrigan, who would later coach the Bates team in the 1930s, was a combative player-manager who led the Sox to World Series titles in 1915 and again in 1916. 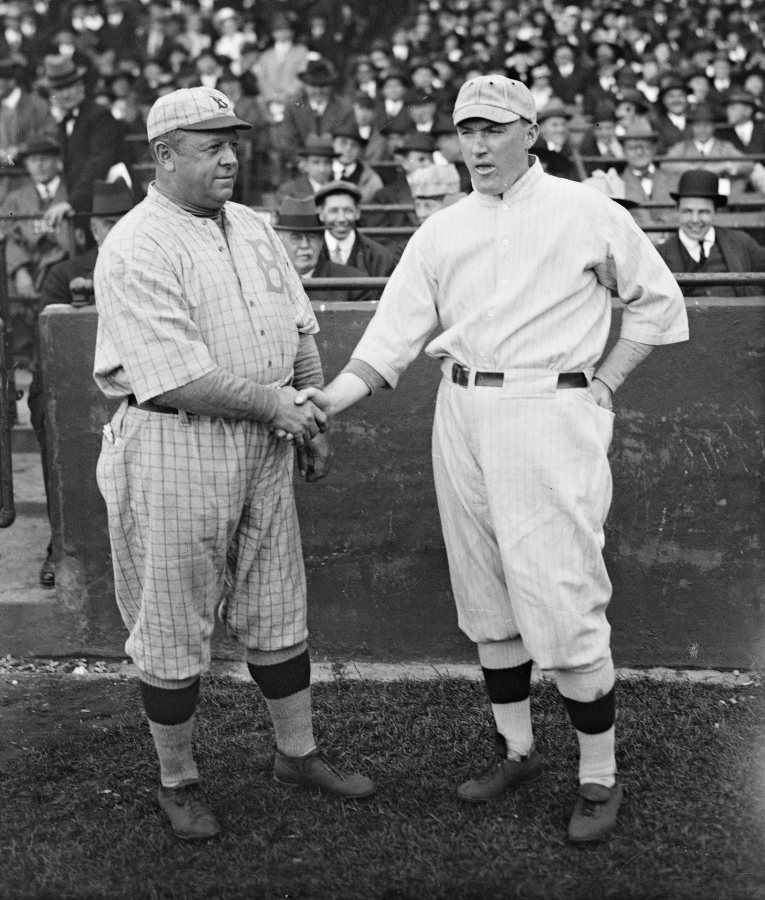 A catcher who earned the nickname “Rough,” Carrigan was famous for blocking a runner’s path to the plate, which often led to spectacular collisions — and fights.

According to The Irish in Baseball (Carrigan was born to Irish immigrant parents), the ballplayer was “intelligent and well-spoken” off the field, “but one of baseball’s best fighters on it.”

“You might as well try to move a stone wall,” Chicago White Sox manager Nixey Callahan once said.

Said Carrigan, “The first great requisite for success in baseball is nerve.”

Brooklyn’s Robinson, on the other hand, was “like Falstaff,” The New York Times wrote, “not only witty himself but the cause of wit in others. His conversation was a continuous flow of homely philosophy, baseball lore, and good humor.” 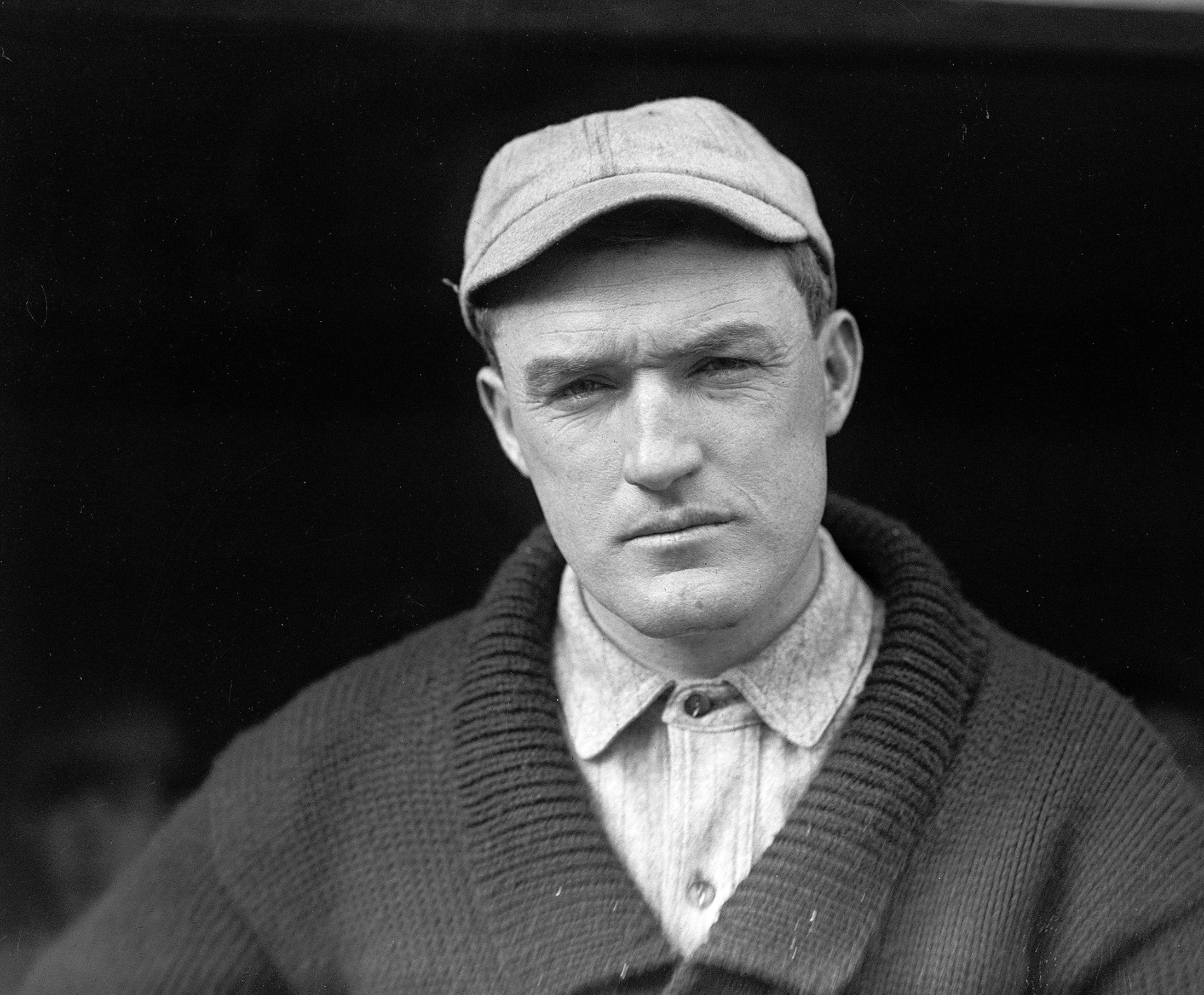 As a catcher, Bill Carrigan was nicknamed “Rough” for his combative style of play. (Library of Congress, Prints & Photographs Division, photograph by Harris & Ewing, LC-DIG-hec-06335)

Babe Ruth, then with the Sox and mostly a pitcher (he won 23 games in 1916), called Carrigan his best-ever coach. In fact, it was Carrigan who urged the Sox to purchase Ruth’s minor league contract in 1914.

In 1916 as now, the Boston fans and media brimmed with confidence.

After the Sox won the 1916 series opener en route to the title, a story in the Lewiston Daily Sun adopted a pitying tone toward the Dodgers, noting that Brooklyn lacked “the smooth, machine-like effectiveness and cooperation that makes the Red Sox so formidable in defensive work and the lightning-like attacks and tactics which prove so productive of winning scores.” 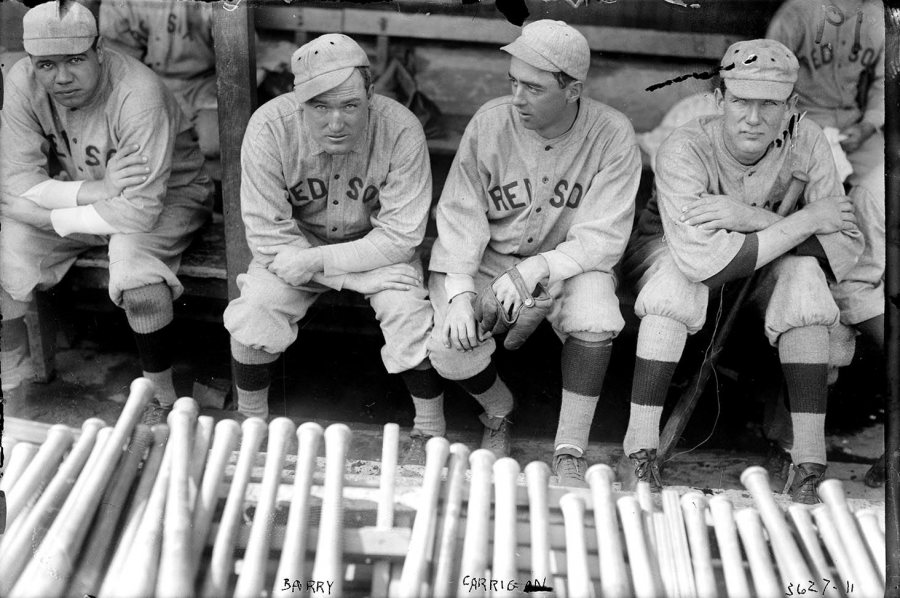 Babe Ruth (left) called Bill Carrigan (next to Ruth) his best-ever coach. It was Carrigan who urged the Sox to purchase Ruth’s minor league contract in 1914. (Library of Congress, Prints & Photographs Division, LC-DIG-ggbain-20081)

Carrigan retired after the 1916 season but returned to coach the Sox from 1927 to 1929, with little success.

“These players didn’t talk baseball,” he said. “They talked golf and stocks and where they were going after the game.”

Returning to Lewiston, where he became a successful banker and businessman, he coached the Bates baseball team in 1933 and 1934, compiling an 8-13 record. He died in 1969 at age 85.