Just past 8 last Thursday morning, a crew from Bates Facility Services drove their red Chevy pickup truck to a nearby recycling center.

They weren’t making a delivery to Casella Waste Systems — the utility trailer they were hauling was empty.

Instead, the trip was for art’s sake, as the Bates team of Mike Adams, Rick Ouellette, Mike Lecompte, and Eric Polley transported five bales of sorted plastics from Casella back to Bates, where the bales are now a temporary artistic installation on the lawn outside Commons.

At the Casella facility that morning, as the five bales waited for a forklift to place them onto the Bates trailer, they weren’t yet art. Or were they? 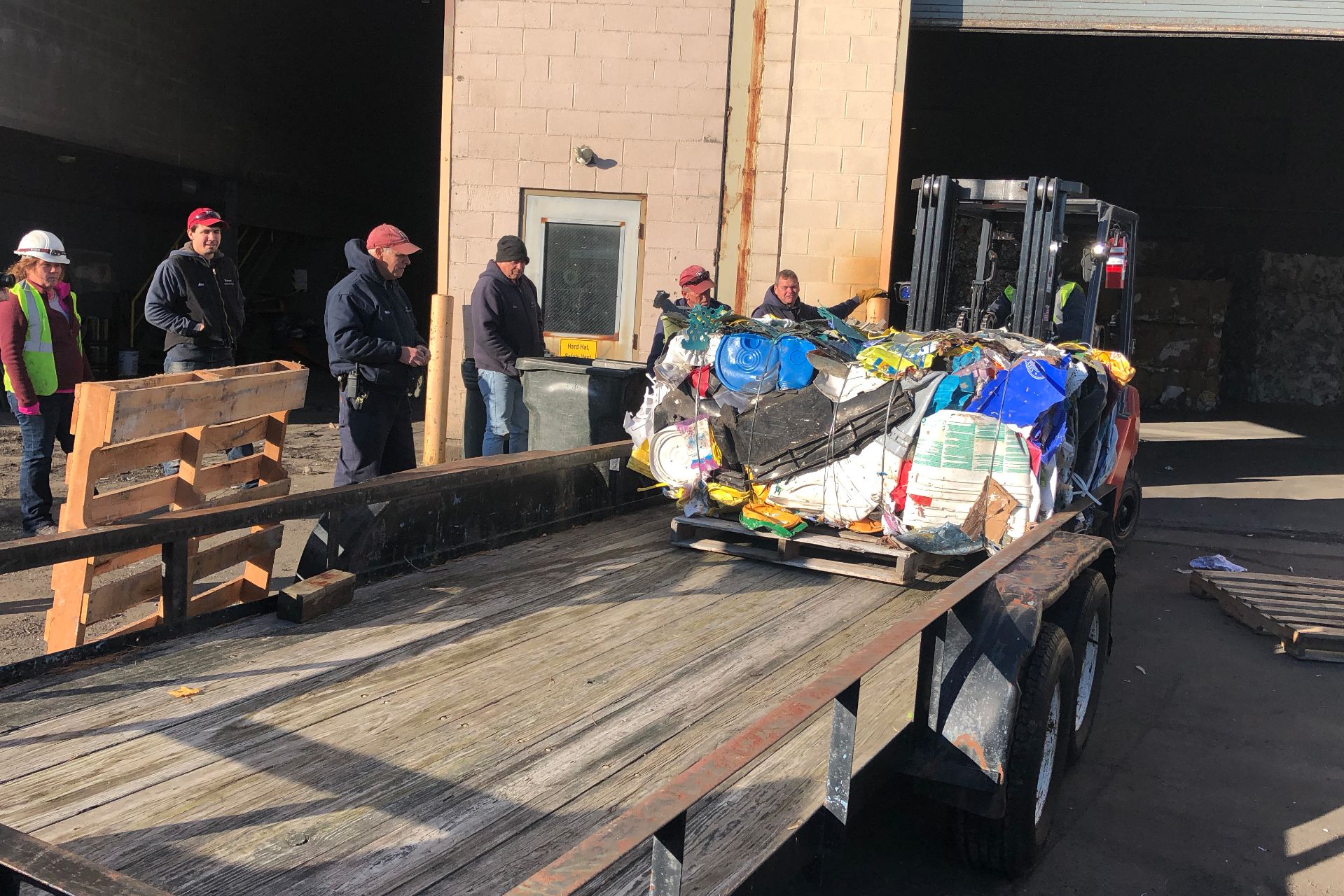 A forklift loads one of five bales of plastics recyclables, all destined for the Bates campus, onto a flatbed utility trailer at the Casella facility in Lewiston on Oct. 25. (Jay Burns/Bates College)

“One of the folks moving the bales asked me, ‘Is it art yet?’” said Adriane Herman, a Maine artist who’s behind the exhibit Out of Sorts, now on view on the lawn outside Commons. “It’s an interesting question.”

Herman’s installation is best appreciated in context, including why it’s here: as part of a bold new Bates Museum of Art exhibition, Anthropocenic: Art About the Natural World in the Human Era, which opened last week, featuring artwork examining humanity’s mark on the planet with pathos, wit, and an eye-opening diversity of conceptual approaches and media.

Herman, who has shown her art at the Portland Museum of Art, the Center for Maine Contemporary Art, and the Brooklyn Museum, among other venues, is a Bates visiting artist. Supported by the Learning Associates program, she is joining classes and meeting student groups.

+What's in the Five Bales? 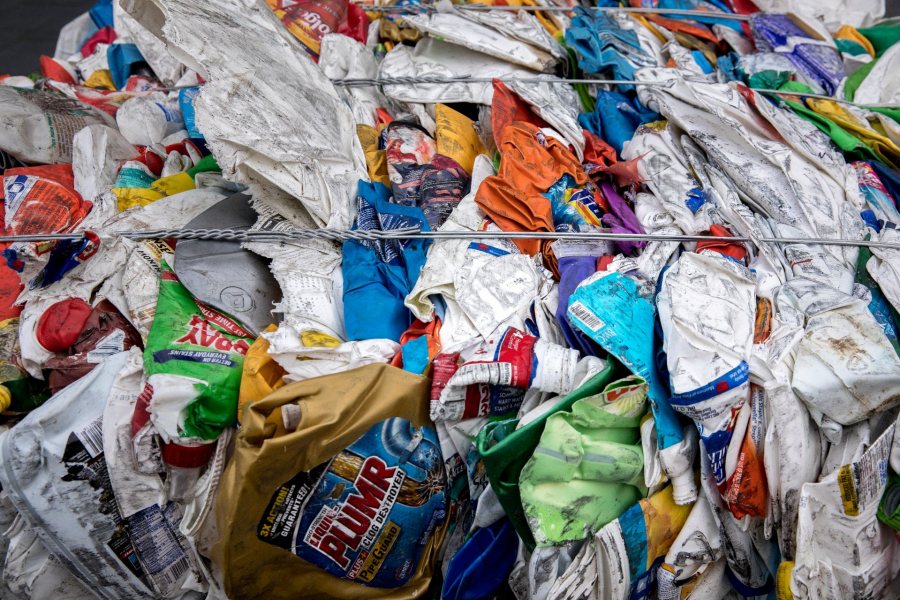 On loan from Casella Waste Systems, the bales that comprise the installation Out of Sorts contain five types of commonly recycled plastics, according to their identification codes. Casella also bales up paper, metal, and glass.

Bale 5: Rigid plastics — e.g., larger items such as laundry baskets and utility buckets. These have mixed plastic identification codes up to 7.

Last year, Herman installed a version of Out of Sorts at SPEEDwell Projects in Portland, where it challenged viewers with “an anti-aesthetic appearance,” critic Daniel Kany said in a Portland Press Herald review.

It’s offering that appearance at Bates, too: The five bales sit in an otherwise pretty Bates place, pieces of plastic from the bales flapping and flying away in the October breeze.

And as the bales did in Portland, they present at Bates “a practically inexplicable oddness,” in Kany’s words.

Perhaps odd because the bales embody a paradox. They’re about “doing the right thing by our world” by recycling, Herman says, yet so many items inside the bales, like plastic water bottles, suggest that “we’ve hooked our wagon to the paradigm of convenience.” 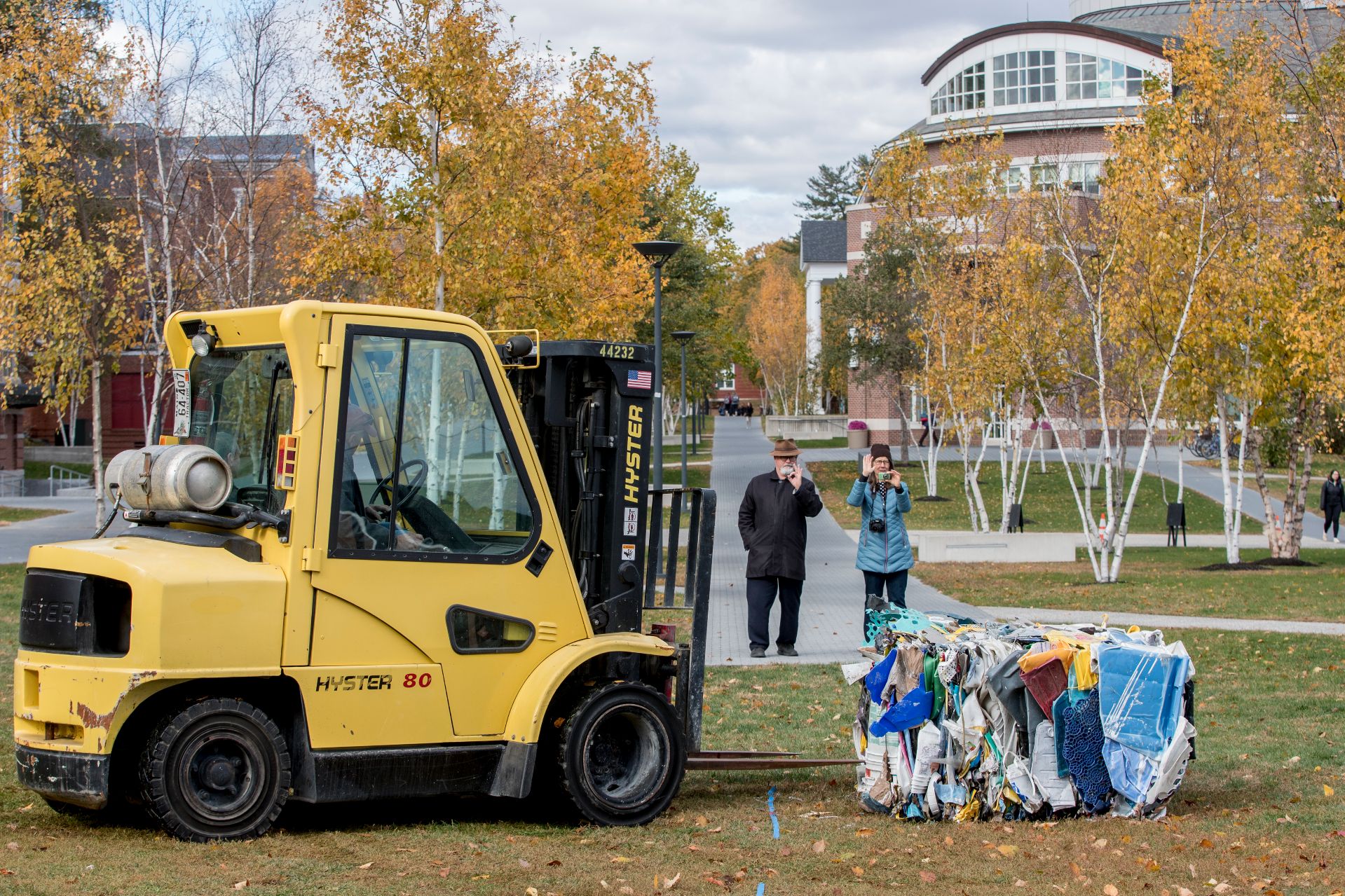 Mike Adams of Bates Facility Services uses a forklift to nudge one of the five bales that comprise the installation Out of Sorts into position outside Commons on Oct. 25. Artist Adriane Herman (left) and Dan Mills, director of the Bates College Museum of Art, guide the placement. (Phyllis Graber Jensen/Bates College)

As an oddity, “it’s definitely art,” says Jake Michael ’21, a prospective English major from Ketchum, Idaho, who stopped by the bales on Tuesday. His reasoning: “It’s a representation of something designed for a specific purpose. In a way, it’s aesthetically appealing, the way they’re lined up.”

Herman says the quip “Is it art yet?” was made in fun but is still worth addressing. For one, the bales, measuring 5 feet by 4 feet by 3 feet, weren’t even created by an artist (though in terms of what defines art, that’s not a dealbreaker, considering Marcel Duchamp and his Readymades). And, she says, “I’m not necessarily invested in them being called art.”

“My intention is to pluck these things from ‘the unseen’ and to boomerang them back.”

Instead, she explains, her creative act is in “borrowing them and recontextualizing them.” That is, removing them from a recycling facility tucked away in an industrial park and plopping them down in a highly public space at a liberal arts campus.

“Context and intention are very important,” she says. “My intention is to pluck these things from ‘the unseen’ and to boomerang them back. It’s like finding gum on your shoe, which this stuff really is.” 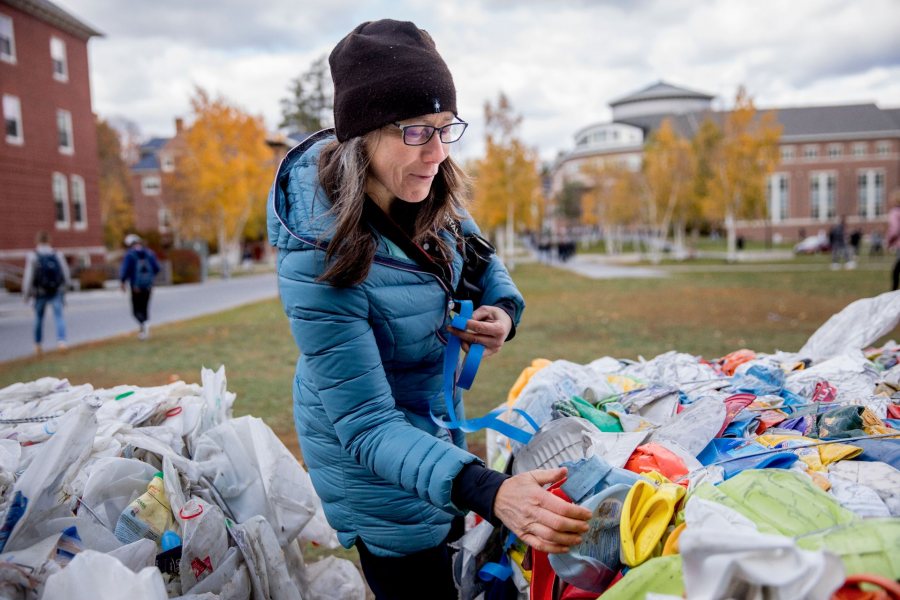 Maine artist Adriane Herman inspects the bales of plastic recyclables before they were placed into position on the lawn outside Commons. (Phyllis Graber Jensen/Bates College)

And some of that gum could be our own. Since Casella handles Bates recyclables, “some of what’s in the Bales may be making a return trip to campus,” says Dan Mills, director of the Museum of Art.

After seeing a few photos of the bales on the Bates Instagram feed, Nahida Moradi ’22 of New York City says that context matters in another way: distance.

“It stood out to me: the photo of guy with a skateboard, really up close, looked cool.” From another perspective, the top floor of Roger Williams Hall, “it just looked like blocks of plastics gathered together. It didn’t seem that cool, from far away.”

The blocks also make her think, in a hopeful way, of the building in Taiwan that was created from PET plastic bottles. “It’s a good way of putting to use what’s been wasted.” 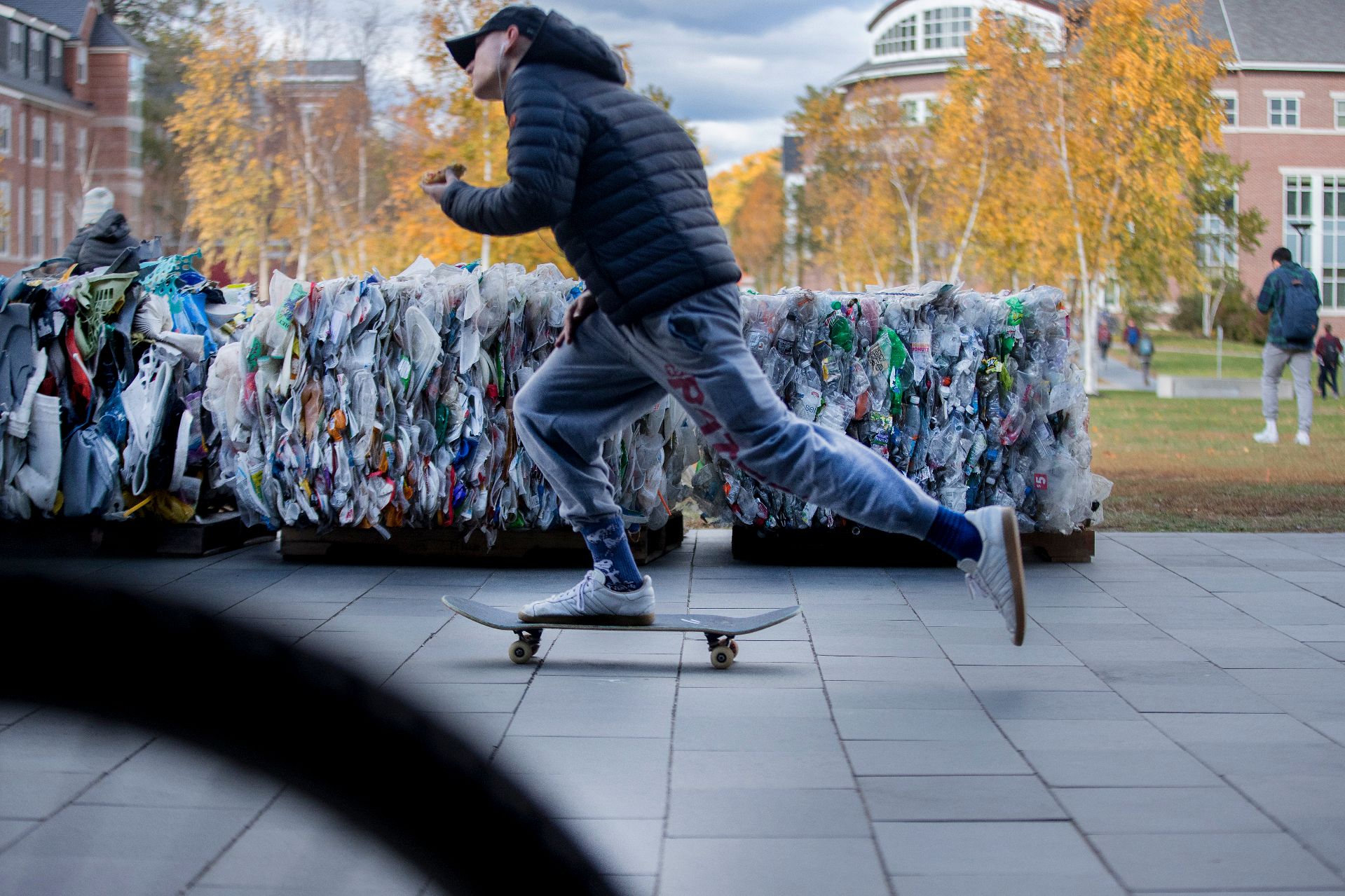 A skateboarder flies past the bales of plastics before they were placed into position. (Phyllis Graber Jensen/Bates College)

The bales have thus become objects of contemplation by an audience, Herman says. “So I think they fulfill that role of art — to make people think about things, and to activate people around what they’re consuming and disposing.”

As Jake Michael got closer to the bales and saw the twisted and contorted items smashed inside, he also thought about context. “I’m thinking about how I view these things differently when they’re not bundled together in a heap of trash — and it makes me think they’re kind of disgusting now.

“Yet we created them and we don’t think ‘disgusting’ when they’re not bundled together, when we don’t see this product. In that respect, I would say that it is art, yes.” 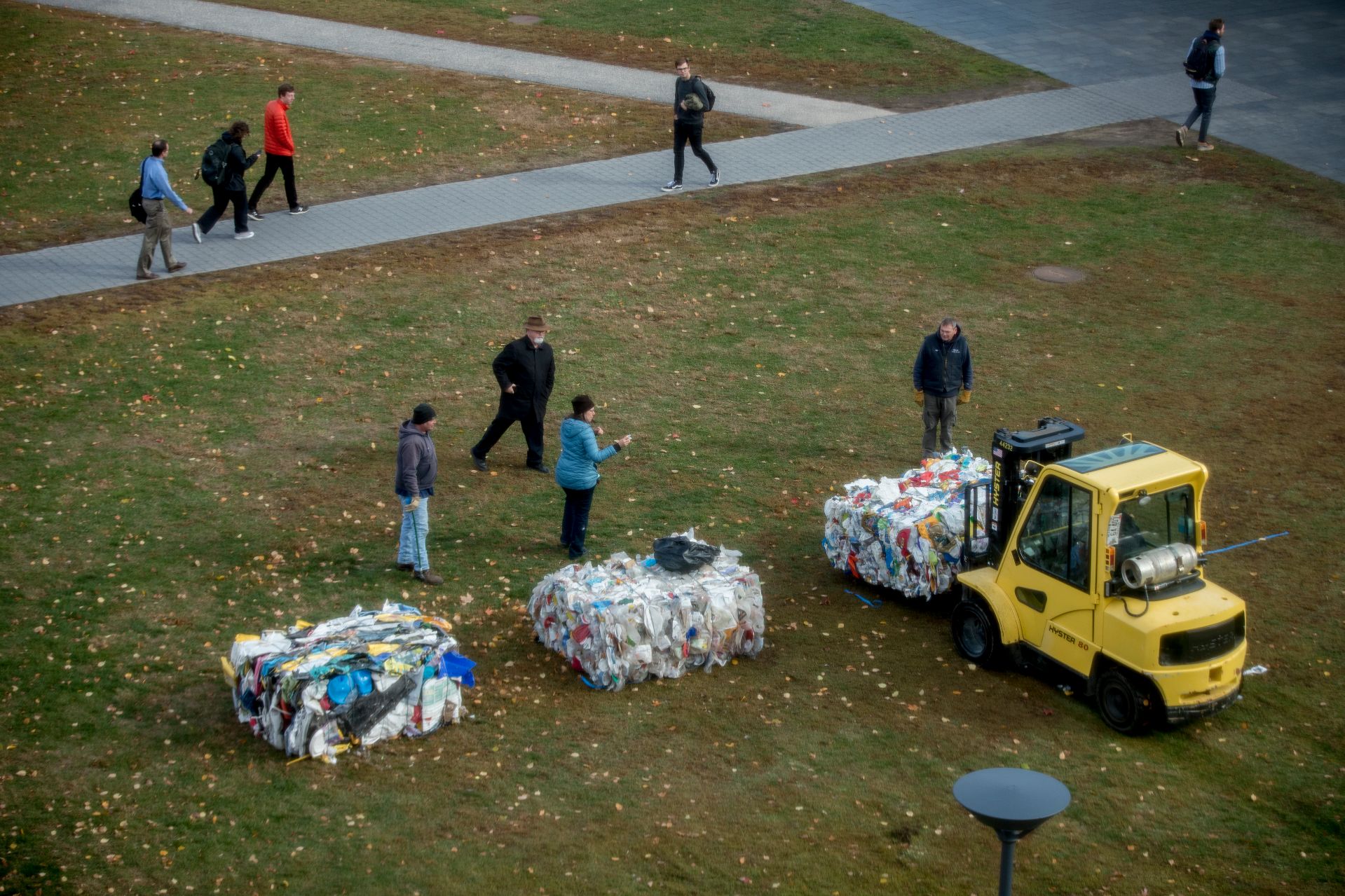 Seen from the top floor of Roger Williams Hall, the bales are placed onto the lawn in front of Commons. (Phyllis Graber Jensen/Bates College).

As Austin Dumont ’21, an aspiring politics major from Auburn, Maine, considered the bales, he thought about privilege: Who gets to recycle? Who gets to have the knowledge about recycling?

“Because of the disparities in knowledge about these things, some communities may have recycling, and some may not,” he said. “It might depend on where you live, your ZIP code — and some of that might have to do with income.”

At Bates, earnest efforts by the college’s sustainability team, including Dining Services, has increased the percentage of waste diverted from landfills to 45 percent.

Improving the diversion rate can pay dividends: Bates pays between $60 and $80 per ton for trash that goes to a landfill, and typically about half that for out-going recyclables, though the volatility of the market in the last year has meant that Bates has paid as low as $7 per ton and as high as $107 per ton in the last year.

The Casella facility in Lewiston takes in recyclables — cardboard, paper, plastic, metal, and glass — from Bates as well as cities and towns around Maine and New Hampshire, processing up to 22 tons of material each hour and selling the baled results to manufacturers to create new products.

(More context: The route to the facility from campus takes you past Casella’s neighbor: a massive Walmart distribution center, one of only two in New England. You can’t help but think: Stuff heads out one door at Walmart and, eventually, in the other door at Casella.) 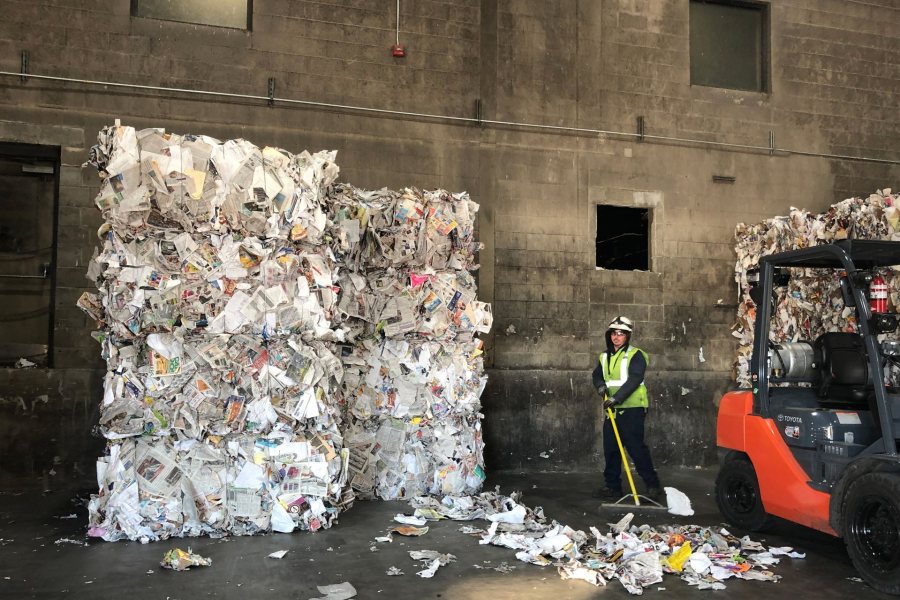 A Casella worker sweeps the floor next to a stack of baled recycled paper. (Jay Burns/Bates College)

At Casella, the sorting requires brute force and a light touch, a mix of people and machines. “It’s sorted by and it’s baled by us,” says Mary Haynes, a Casella supervisor.

At the beginning of the sorting process, workers hand-remove nonrecyclables, like Styrofoam, as the materials speed by on the conveyor belt. From there, much finer sorting processes, both mechanical and human, eventually yield a balable stream of recyclable materials.

Look at the bales, says Herman: All that industry is inside. “They’re monumental and massive. Look at the heft of them, the weight — it takes machinery and people and trucks and more fossil fuel to move them.” 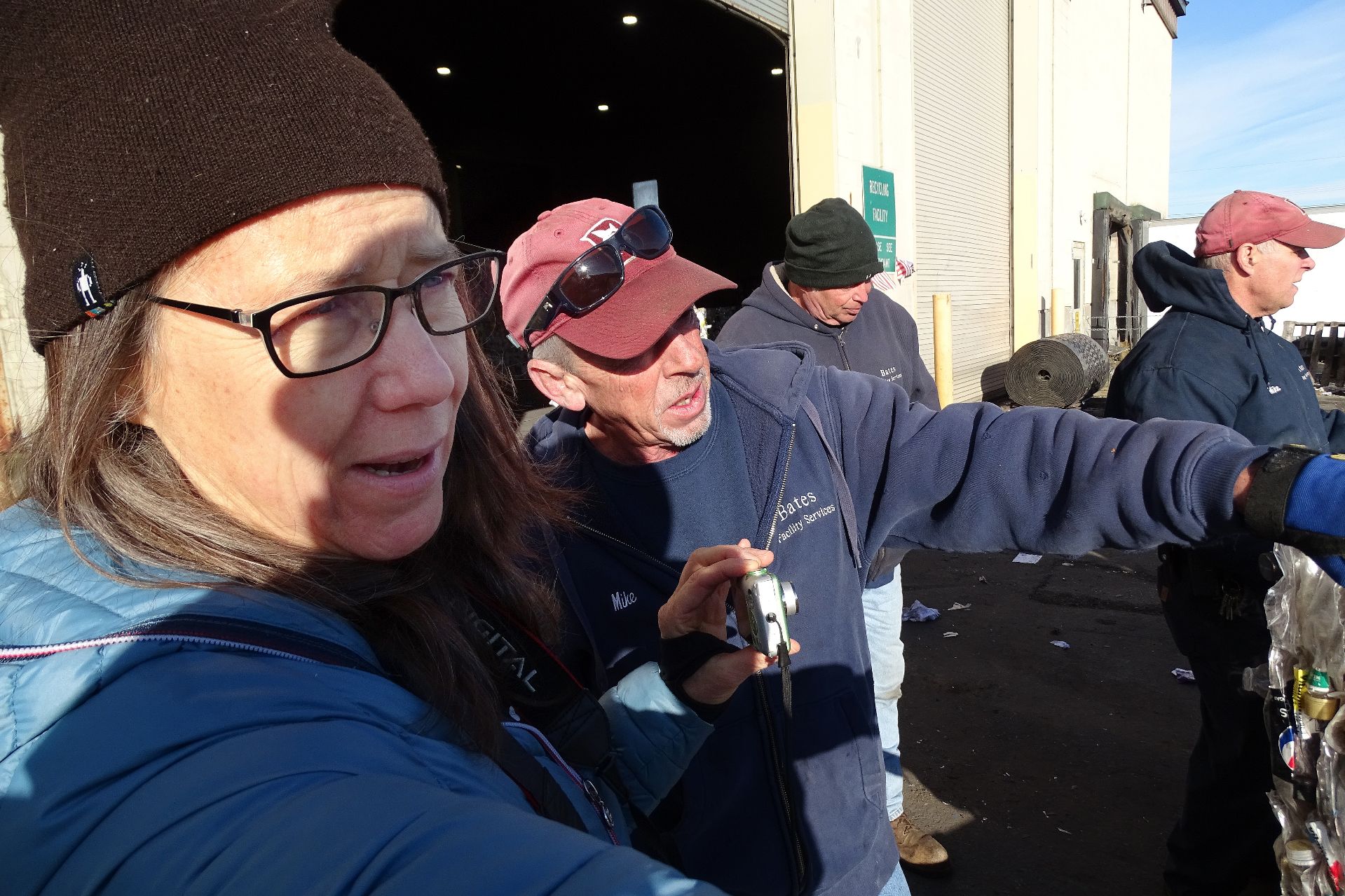 Yet while the bales suggest big ideas like consumerism and recycling, Herman asks that we notice, too, how they’re loaded with poignant, if mundane, evidence of “our daily activities and efforts — to feed ourselves, our families, and our pets; to clean and organize things; and to stay alive and mentally stable,” the latter a reference to prescription-medicine bottles here and there in the bales.

All of it, she says, is worth our attention and focus. “We can always look more closely at what we are doing,” she says.

And when we “attend to things at the granular level,” she says, we stake a claim for being “more sensitive to subtlety and nuance” — a lesson of the liberal arts, to be sure — at time when such qualities are in short supply.