Brains and how we study them: Views from the Kelsey Professor of Neuroscience

Roll these questions around in your mind for a minute, and you’ll get a sense of what makes Bates’ approach to teaching neuroscience distinctive. As exemplified in a recent talk by Nancy Koven, John E. Kelsey Professor of Neuroscience, it’s an approach that considers not just the science of neuroscience, but the cultural context into which that science and its subjects are inextricably woven.

The Bates neuroscience program, perhaps uniquely, points “specifically to the value of humanistic inquiry to help students evaluate the context in which neuroscience operates,” Koven said in the Oct. 25 talk that celebrated her appointment as the inaugural Kelsey Professor. 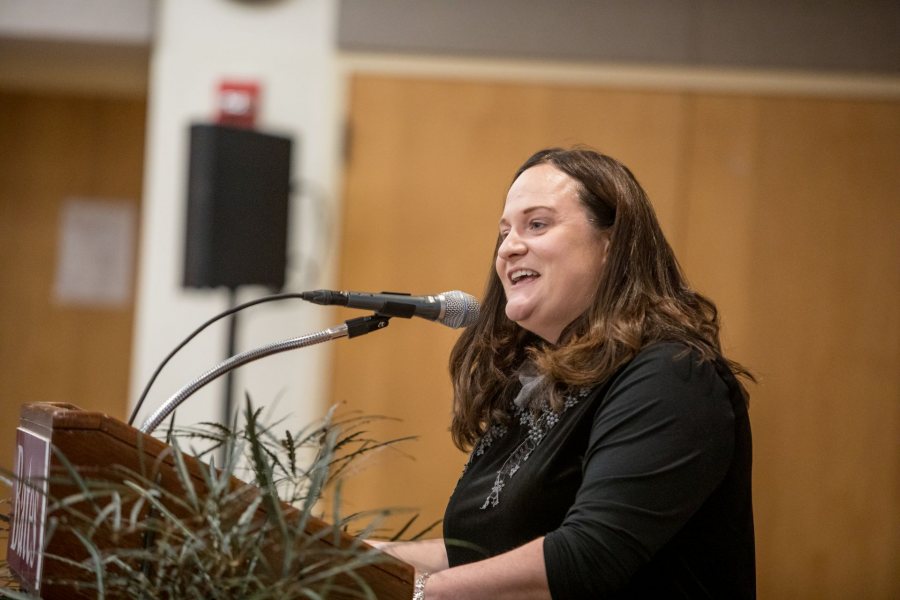 Nancy Koven delivers her address, “Stories of Neuroscience,” celebrating her appointment as the John E. Kelsey Professor of Neuroscience on Oct. 25. (Rene Roy for Bates College)

Titled “Stories of Neuroscience,” Koven’s address was the centerpiece of a crowded and festive gathering that, as President Clayton Spencer indicated in her welcome, had every reason to rock. “The celebration of a professorship is always one of the most significant moments in the life of a college,” she said, “and today’s celebration is particularly rich because it is multi-generational in multiple ways.”

First, the new professorship honors John Kelsey, who came to Bates in 1979, taught and conducted research for 34 years, and, in Spencer’s words, became “a distinguished and beloved member of the Bates faculty who had an outsized impact on the life of the college and the lives of many, many students.”

Kelsey, who was on hand for the occasion (and lent a hand too, helping to set out extra seats as the room filled up), played a definitive role in establishing Bates’ Program in Neuroscience, which Koven chairs.

In Koven, Spencer continued, the Kelsey Professorship honors “a current faculty member who upholds these traditions of commitment and generosity in every aspect of her work — teaching, research, and service.” 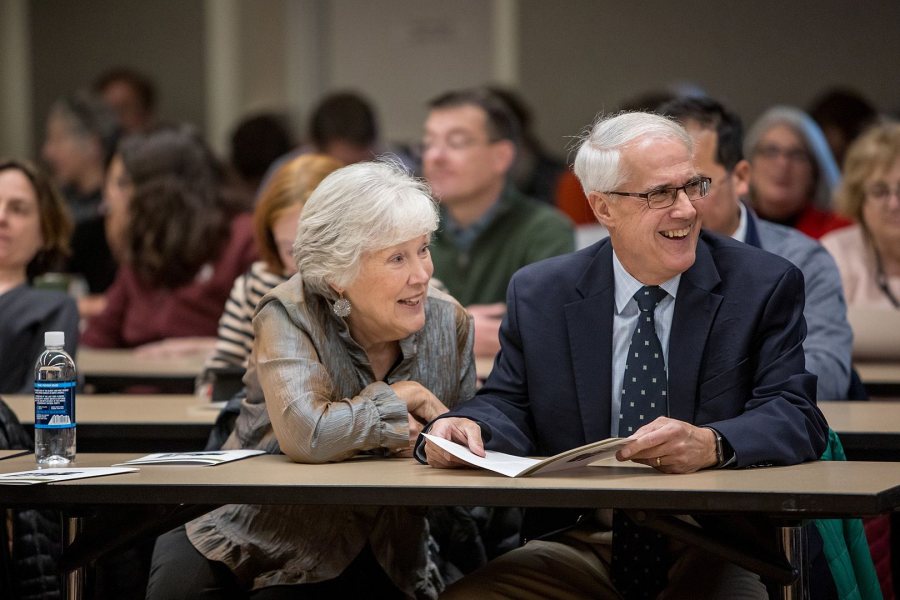 Sally Kelsey and her husband, Professor Emeritus of Psychology John Kelsey — namesake of the new Bates professorship— chat with another table prior to Nancy Koven’s address on Oct. 25. (Rene Roy for Bates College)

And the professorship itself, announced last spring, was the gift of a family “with long ties over many decades to Bates”: the Bonneys, represented at Koven’s talk by members of three generations, including the couple who endowed the Kelsey professorship, trustee chair Michael J. Bonney ’80 and Alison Grott Bonney ’80.

Using his introduction to offer a primer on Kelsey, Koven, and the neuroscience program itself, Dean of the Faculty Malcolm Hill summarized the program as “one which today provides students with a deep understanding of the relationship between the nervous system and behavior, but also the historical, political, and ethical context in which neuroscience operates.

“This is important in our liberal arts context here at Bates.”

A Bates professor since 2006, Koven is a clinical neuropsychologist who studies connections between brain regions and cognitive and emotional functions. Her address did uphold its title with a couple of stories, including one about an early lesson about tribal hierarchies in the medical establishment.

The audience fills the Keck Classroom in Pettengill Hall for Nancy Koven’s talk, “Stories of Neuroscience” on Oct. 25, 2018. (Rene Roy for Bates College)

But the heart of the talk was a sampler of student work at the intersection of neuroscience and what Koven called humanistic inquiry — a means of enriching a discipline, she explained, that can otherwise be reductive to a fault, treat brains as disembodied phenomena, and fail to see its own reflection in its conclusions.

“In essence,” she said, “we simplify the complexity of a person into variables that we care most about, hope that we’re capturing the essentials, average those essentials with those from other stripped-down people, hope that the resulting data that’s really no one is really everyone, and then tip-toe quietly around this question of what to do with all those juicy leftovers.”

With science fiction common to both, a first-year seminar and an upper-level seminar that Koven created provided examples of the humanistic approach in action.

Offered in 2016, the FYS engaged new “students from the get-go with lines of humanistic inquiry,” she explained. Last winter’s upper-level course, “Embodied Cognition, Technoculture, and Future of Identity,” provided a “culturally critical lens” for students already well-versed in neuroscience. 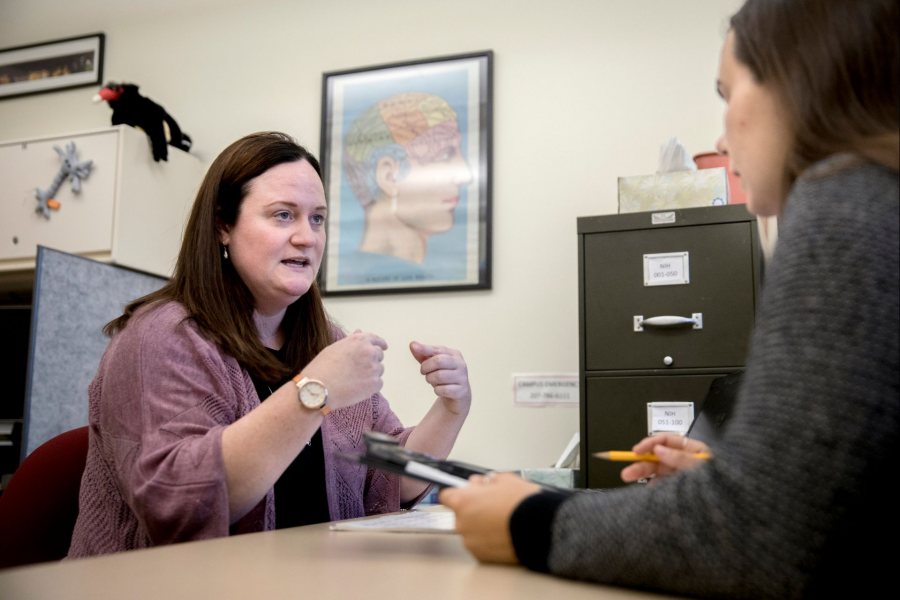 Why science-fi? It’s a genre that “prompt[s] a realization for the reader that the here-and-now of our world does not have to be the way it is,” and ideally liberates readers to ask challenging questions. Another commonality between the courses is that Koven asks her students in both to undertake creative work in a variety of media.

In the FYS, for instance, “I asked students to conceptualize a piece of future neurotechnology, and to think about commercialization by marketing this fictitious concept in the format of a Victorian-era ad,” she said.

In both courses, she assigned students to find two real examples of “body technologies that have implications for cognition, emotion, sensation, perception, or movement” — with one example being something sanctioned by medical neuroscience, and the other representing “body hacking,” where people install technology into their bodies independent of the medical establishment.

The body-hacking example was a “third ear” — an ear-shaped growth on an Australian performance artist’s forearm that is equipped with a microphone and wifi to enable, “basically, a global sharing of a person’s immediate soundscape.” Its medically approved counterpoint was a deep-brain stimulator, implanted in people with conditions such as epilepsy, that both monitors brain activity and applies an electrical pulse as needed to avert possible seizures. 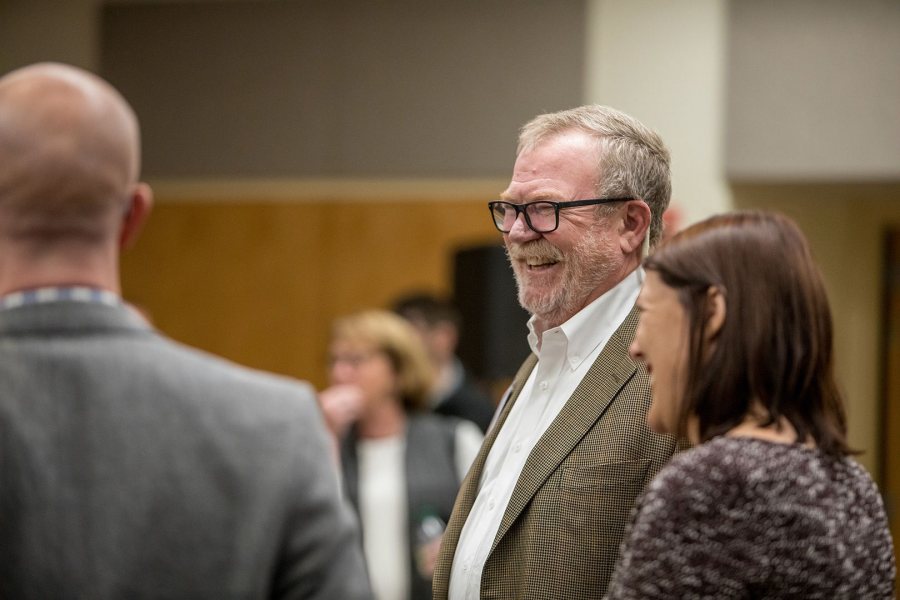 Michael Bonney ’80, chair of the Bates Board of Trustees, in conversation prior to Nancy Koven’s address Oct. 25 celebrating her appointment as Kelsey Professor of Neuroscience. Bonney and his wife, Alison Grott Bonney ’80, endowed the Kelsey chair. (Rene Roy for Bates College)

“What I deeply appreciate” about that example, Koven said, was a question that it raised for the student who submitted it, Claire MacKay ’20: “While this device addresses troubling symptoms of a disease, it is nonetheless a vehicle by which to impose electrical norms in the brain. What mental phenomena might we police?” That was one of many provocative student queries that Koven shared and that, in and of themselves, were one of the most engaging aspects of the talk.

An outstanding example of student creative work came from the upper-level course and Koven’s challenge to create a so-called body-shopping catalog for consumers in a future “in which the body is an optional mode of existence and is, as such, deliberately constructed and customized.”

Julie Stitt Self ’18 and Lindsey Beauregard ’18 rose to the challenge by creating a faux Amazon.com site that took themes from the course and set them in a commercial context. With one of their imaginary products, the customer can be re-embodied in literature: “Feel like you always have your head stuck in a book? Try your whole body. Swap out your meat bag and become a body of literature instead.”

“It opens the door for people, now bodies of information, to be uploaded into digital beings.”

The site came complete with Amazon verisimilitude in the form of apparatus such as customer reviews. “Generally love this product,” said one review. “Not only can I keep immaculate records of my memories, but I can also write myself into a new fantasy whenever I choose.” 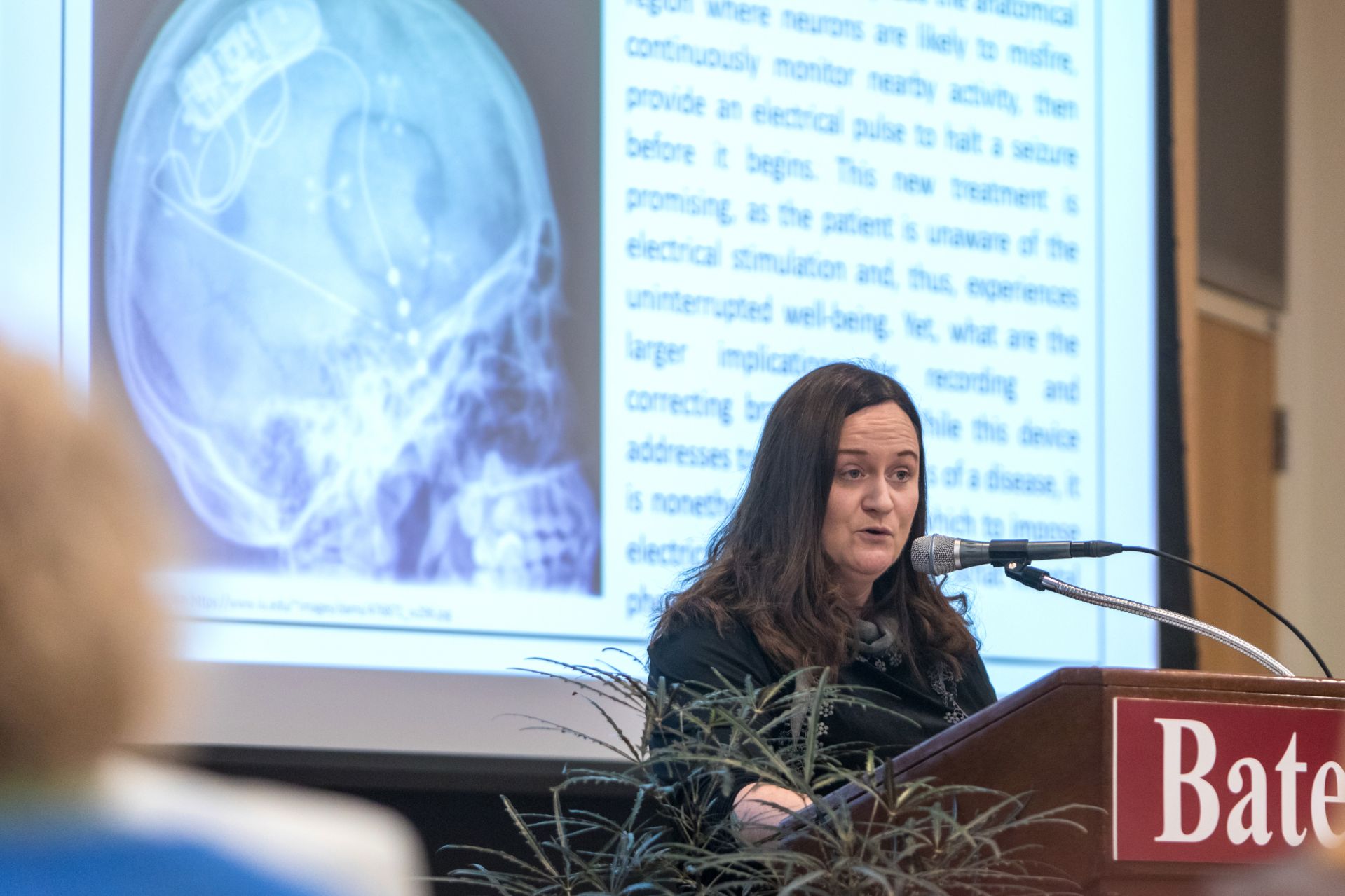 Koven introduces her audience to a theme that has emerged from her students’ work: the relentless thinning of the wall between human and machine. (Rene Roy for Bates College)

That project speaks to one of the broader themes that emerged from the student work: the relentless thinning of the wall between human and machine, and a mind-bending projection of that trend. Digitalization, Koven said, “reinforces the idea that bodies can be read as information, opening the door for human beings to be rendered in code.

“For excited futurists, it opens the door for people, now bodies of information, to be uploaded into digital beings. A wide-scale leaving-behind of what some see as a perennial problem of the body would constitute a digital diaspora. Digital uploading also invites the idea of digital downloading, and it promises immortality either way,” as the body-shopping notion suggests.

Still, the prospect of a digital diaspora “is fraught territory,” Koven noted, especially among those who have worked so hard to defend their identities here in the realm of flesh and blood. She said, “Looking forward can sometimes seem like a dereliction of duty to the past and to the present.”

“I think humanistic lines of inquiry help up do this kind of work, and I’m delighted to be part of a developing Bates neuroscience story that recognizes this.” 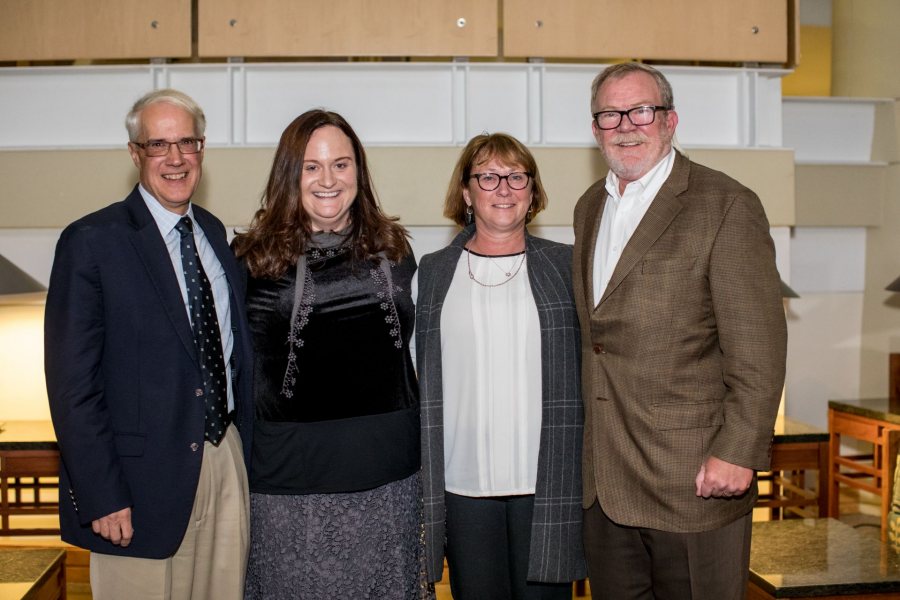 From left, John Kelsey, Nancy Koven, Michael Bonney ’80, and Alison Grott Bonney ’80 pose for a photo after Koven’s talk. The Bonneys’ gift endowed the new neuroscience professorship held by Koven and named in honor of Kelsey, a member of the psychology faculty for 34 years. (Rene Roy for Bates College)

Evelynn Hammonds, eminent scholar on issues related to women of color in STEM, elected to Board of Trustees