Evelynn Hammonds, eminent scholar on issues related to women of color in STEM, elected to Board of Trustees 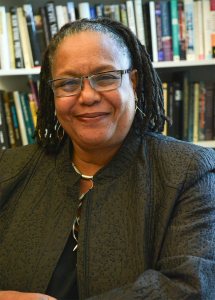 Evelynn Hammonds, L.H.D ’11 has been elected to the Bates College Board of Trustees. (Don West / fotografiks)

“I am thrilled to welcome Evelynn Hammonds to the Bates board,” said Chair Michael Bonney ’80, P’09, P’12, P’15. “Evelynn is an accomplished academic leader, a distinguished scholar, and a recognized expert on issues related to race, gender, and science. She will add a uniquely powerful perspective to the work of the board.”

“I am very pleased to be joining the Bates trustees,” said Hammonds. “I have long been aware of Bates’ distinctive history and strong commitment to sustaining a college and community dedicated to academic rigor and inclusive excellence. I look forward to working on behalf of this wonderful institution.”

At Harvard, Hammonds is also the director of the Program in Race & Gender in Science & Medicine at the Hutchins Center for African and African American Research. She previously held senior academic leadership positions at Harvard, including dean of the college and senior vice provost for faculty development and diversity.

She is the author of Childhood’s Deadly Scourge: The Campaign to Control Diphtheria in New York City, 1880–1930 (Johns Hopkins University Press, 1999) and numerous scholarly articles. Hammonds is the co-editor of The Nature of Difference: Sciences of Race in the United States from Jefferson to Genomics (MIT Press, 2008) with Rebecca Herzig, professor of gender and sexuality studies at Bates.

Hammonds was named a Sigma Xi Distinguished Lecturer (2003–05) by Sigma Xi, The Scientific Research Society. She has been a visiting scholar at the Max Planck Institute for the History of Science in Berlin and a fellow in the School of Social Science at the Institute for Advanced Study in Princeton, N.J.

In 2011, she was awarded an honorary Doctor of Humane Letters from Bates for her “informed hopefulness and critical brilliance, twin qualities of leadership that encourage us all as we strive for greater social justice in our society and world.” She was also a Commencement speaker that year.

In 2015, Hammonds returned to the Bates campus to deliver the opening address at the Bates-hosted Creating Connections Consortium Summit, speaking on “Creating an Inclusive Academy in the 21st Century.”