“The commons” is a term applied to things that belong to everyone and to no one — things like the oceans, intellectual property, and cyberspace. Since his days at Bates, Christopher Crum ’17 has been a student of this concept and of the legal means that people devise to stake a claim on the commons.

Crum’s interest recently received some powerful validation: a highly competitive Marshall Scholarship, which will support two years of postgraduate study in the U.K.

One of 48 recipients of a 2019 Marshall Scholarship (selected from more than 1,000 applicants), and only the second from Bates since the program was founded in 1953, Crum will take a hiatus from Chicago Law to spend his two years at the University of Oxford. (Linda Griffiths Johnston ’79, a music major who also went on to Oxford, was the first Marshall Scholar from Bates.)

At Bates, Crum’s award-winning honors thesis in history scrutinized 17th-century intellectual debates over ownership of the seas, comparing arguments made by Portuguese jurists with those from other naval powers.

These days, he’s focused on a wholly contemporary, even exigent, slice of the commons: the internet and social media, and ways they’re undermining politics and society. A second-year student at the University of Chicago Law School, he’s interested in legal measures that governments might take to protect the integrity of elections, journalism, and data privacy.

At Oxford, Crum will dedicate the first year to a study of the social science of the internet at the Oxford Internet Institute, coming away with a master of science degree. Independent research culminating in a master of philosophy will consume the second year. Thereafter he’ll complete his law degree at Chicago.

“Chris was simply masterful at facilitating difficult conversations among his peers.”

Funded by the British government and offered only to U.S. citizens, the Marshall Scholarships are meant to strengthen bonds between the two countries. The program is named for World War II general and U.S. Secretary of State George C. Marshall, whose name also distinguished the famous, massive aid plan intended to get war-ravaged Europe back on its feet.

While Crum admits to thinking that he was a long shot for a Marshall Scholarship, no one familiar with his Bates accomplishments will be too surprised that he received the honor. A Dana Scholar, he headed for Chicago supported in part by Bates’ Raymond J. Oakes Fellowship for continuing legal studies.

Then there’s his thesis. Its potential won him the John Cole Prize for historical research, and the final product earned the Ernest P. Miller Prize for most outstanding history thesis. “Besides his academic successes and intellectual gifts, something that particularly impressed me about Chris was his tenacity,” says history professor Karen Melvin, Crum’s thesis adviser.

“He exerted an enormous amount of energy trying to track down an elusive primary source. He communicated with librarians in Australia, the Czech Republic, and England before eventually sneaking in a trip to the National Library in London during a couple of free hours while in route to a debate tournament in Oxford.” 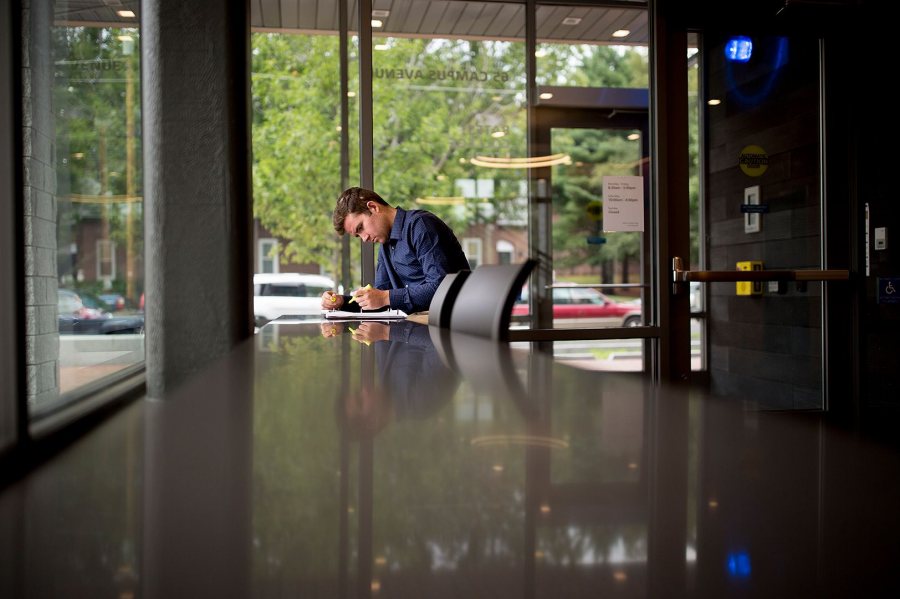 Shown in the lobby of his campus residence, Chu Hall, Chris Crum reads an essay about the U.S. House of Representatives for a politics course in 2016. (Phyllis Graber Jensen/Bates College)

Alongside his academic achievements, Crum’s co-curricular contributions also stood out, notes Dean of Students Joshua McIntosh. Crum was prominent in debate, and served as an AESOP leader and Admission tour guide. And, as a member of an organizational review board in the Bates student government, he played an instrumental role in navigating that body through an especially challenging time.

In that context, says McIntosh, “I was able to observe Chris’s many talents, courage, and character. He was simply masterful at facilitating difficult conversations among his peers, being sure to provide space for different perspectives to be shared and engaging in difficult discourse in a civil manner, even when emotions ran high.

“Chris’s calm, steady, and diplomatic approach to leadership is what allowed the issues to be resolved and to help student government move forward.”

Crum spoke to us from a vacant classroom in the University of Chicago’s Harper Library just moments after a morning of classes and just days before the start of finals.

How did the ownership of the seas lead to the dark side of the internet?

I wasn’t really sure how to take that [earlier interest] and put it into practice following the Bates ethos of trying, in a very clichéd phrase, to make the world a better place.

I was going to law school in the fall, but I wasn’t entirely sure if that would give me the space to really explore how all of these ideas fit together. And that’s where I got the idea of applying to the Oxford Internet Institute, which is essentially a degree-granting version of the Berkman Klein Center.

An objective of the Marshall Scholarship program is to help scholars better understand Britain, and thereby strengthen ties between our two countries. How will that work in your case?

Something that has to happen as a result of Brexit is that the European Union and the United Kingdom will need to set up some sort of new data-sharing agreement. Depending on what that agreement ends up looking like, the U.K. and the U.S. are going to have to renegotiate data sharing across their borders. Given the sort of America-first rhetoric coming out of the U.S., for better or worse, it’s a lot more difficult to cooperate with other countries on things like free-trade agreements or in this case, free data-flow agreements.

I’m really hoping to understand what a potential data-sharing agreement between the U.S. and U.K. could look like, and whether or not it’s going to be predominantly informed by European conceptions of privacy, English conceptions, or, you know, whether an American idea of privacy is going to predominate.

And that has very deep consequences for the special relationship between our countries. Whether or not we are able to cooperate on this fundamental issue of data-sharing across borders, is really, I think, a marker of the health of the relationship.

There’s ample reason to worry about the corrosive effects of the internet and social media on democracy. You’re looking at data privacy in particular. How do privacy and democracy interact in the digital realm? 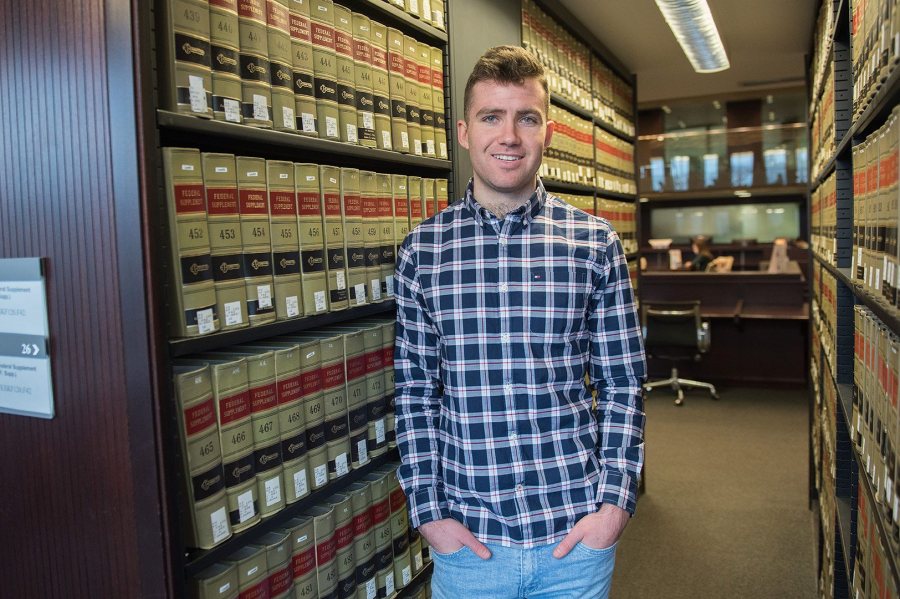 I’m not a political theorist, but I think privacy is fundamental to people operating independently in a society. If there is information that only I know, I can choose whether to give it to other people. That imbues a sense of control, a sense of agency, that is important because it allows people to function more independently.

In addition, a pluralistic society, like the United States aspires to be, depends on people having different understandings of the world and different political views. And in an ideal world, we let the crucible of the political process determine what’s best for the majority of people. Information privacy allows people to develop views that are crucial to that sort of pluralistic society. It’s a theory, but I don’t think it’s implausible.

You received the Libby Prize for contributions to the Brooks Quimby Debate Council not once, but twice. How did the BQDC contribute to you? 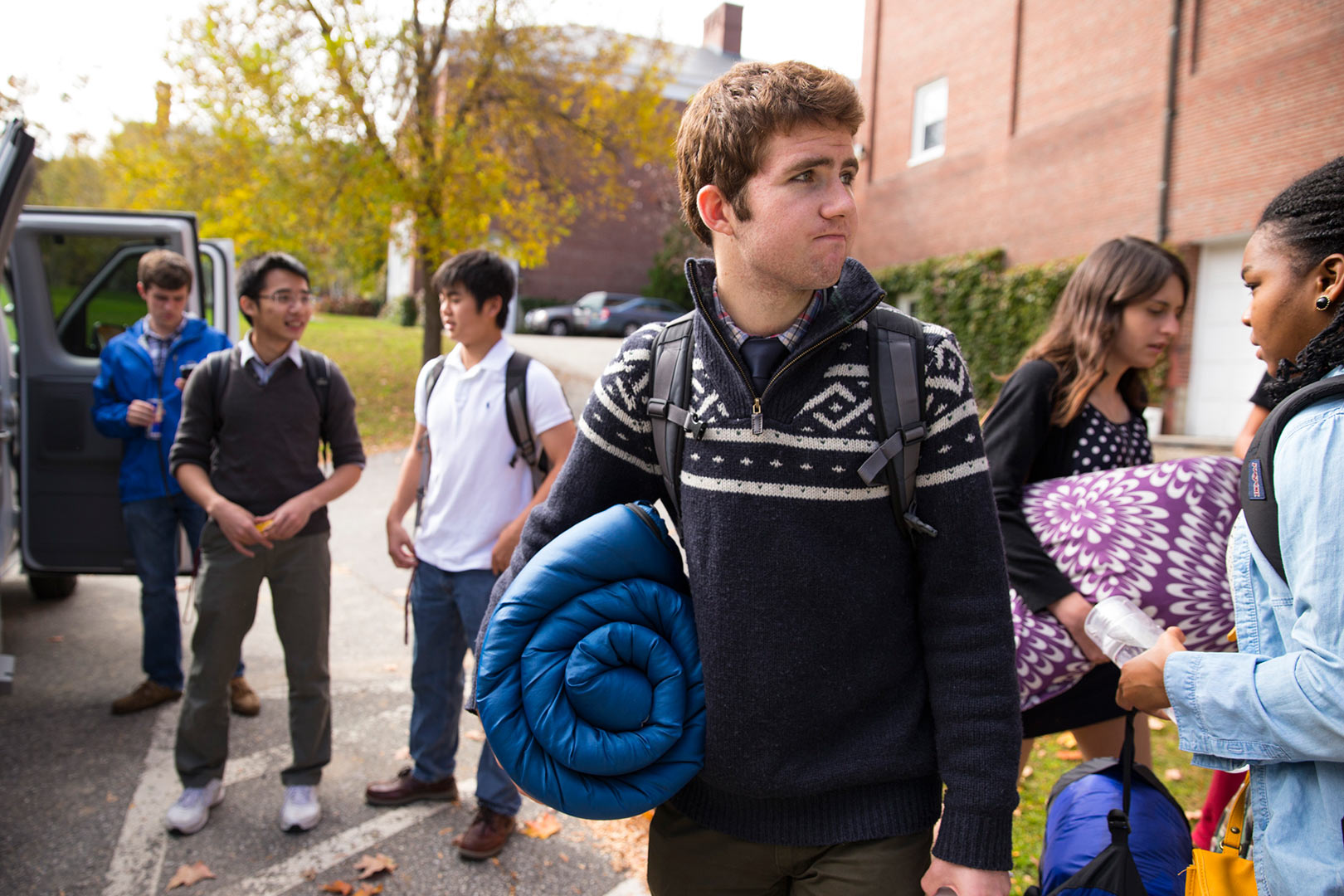 Chris Crum and fellow debaters get ready for a van trip to a match at Harvard in October 2013. (Phyllis Graber Jensen/Bates College)

In a lot of ways, debate was my life at Bates. A significant majority of my friends were on the debate team, I spent a lot of weekends traveling for debate, we practiced three times a week. I’m very lucky that I found the debate team early on in my college experience.

Debate taught me how to put together an argument, and that’s the most invaluable part of, really, anything I’ve ever done. And that’s not an exaggeration. You know, my papers got better a month after I joined the debate team. And it’s served me incredibly well in law school. I have to say that it really does play well in job interviews, when I can say that my favorite extracurricular activity is competitively solving problems on the weekend.

It also was sort of an entrée into Oxford. My senior year, the team went to the Oxford Intervarsity Debating Competition. Oxford is just such a gorgeous place, the libraries are amazing, and I thought, if this could be in my future, that would just be the icing on the cake.