Some of their meanings are self-evident (perhaps deceptively so). Other terms dig deep into the latest thinking on the intersection of issues of race, class, gender, and sexuality in America.

Here are six we heard during the sessions on Monday, Jan. 21, and how they were used by presenters.

The work to achieve greater equity within the Bates community, for all members of our community, is an ongoing process. While this and other stories of MLK Day 2019 show progress and community engagement, we are mindful that much work remains ahead.

This year’s MLK Day theme was “Lifting Every Voice: Intersectionality and Activism.”

In one session, criminologist Chad Posick talked about how race, gender, and geography intersect in criminal sentencing.

While it’s well-known that black people tend to receive harsher sentences than whites who have committed comparable crimes, little is known about how those disparities play out between race and gender and across rural and urban settings.

Black females in rural areas were more likely than their urban counterparts to receive a sentence including incarceration.

Posick and co-author Brenda Blackwell have found that black females are sentenced to prison at a higher rate than white females.

In addition, black females in rural areas were more likely than their urban counterparts to receive a sentence including incarceration— “highlighting an intersectional research strategy for exploring sentencing disparities in the U.S.” 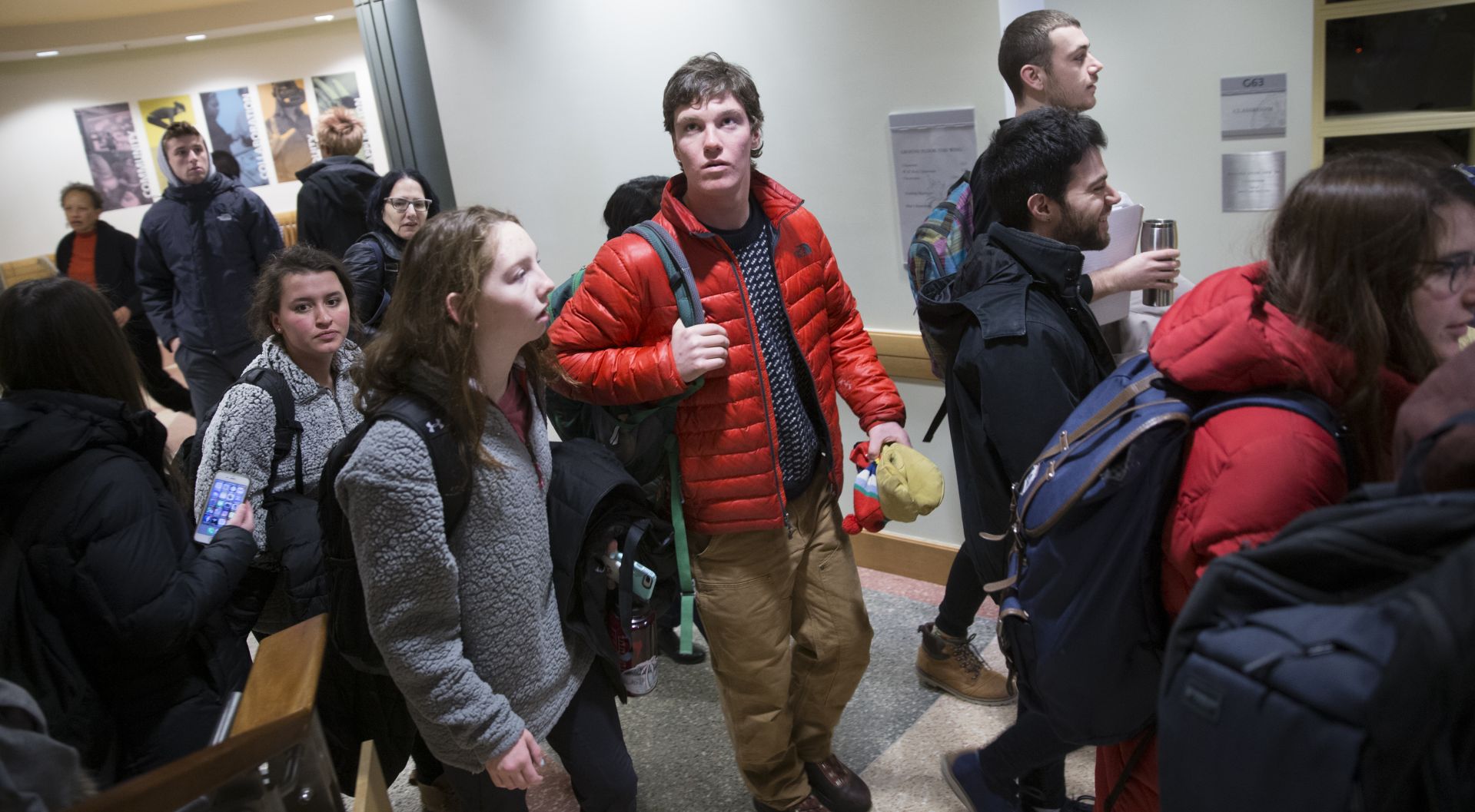 One definition of “activism” is “doing something to change something,” said Creighton.

When it comes to academic writing, “we are trapped, to some degree,” she said.

“I think Bates historians are pretty good activists in the classroom,” she said, in the sense of awakening students’ minds, “being provocative, asking big questions that expose power structures, and helping students think about how the world we are given is made up.” 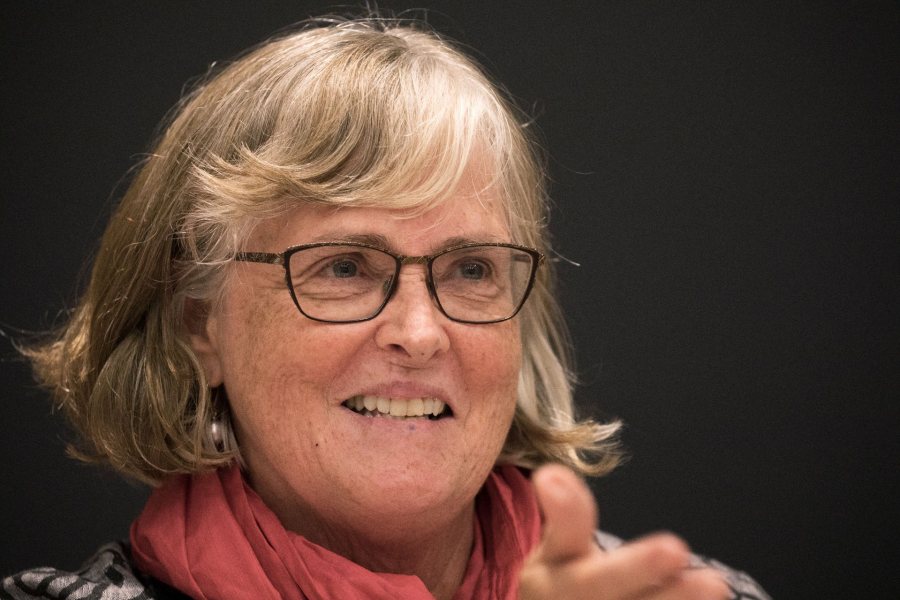 Professor of History Margaret Creighton took park in an MLK Day panel discussion about the intersection of activism and scholarship in the discipline of history. She is seen in 2017 during a Bates faculty discussion after the Unite the Right rally in Charlottesville, Va. (Phyllis Graber Jensen/Bates College)

But when it comes to academic writing, “we are trapped, to some degree,” she said.

“We do wonderful analytic work — thousands of citations and footnotes — and we ground our sources in impressive ways and use the most post-, post-modern language and vernacular. We win friends on tenure and review committees — and we sell about 80 to 100 books.”

She asked, “Is that activism?” Answering her own question, she said, “We could do better,” by communicating scholarly ideas in ways that are more “accessible and democratic.”

This term was used in a session led by professors Charles Nero and Dale Chapman as they looked at the song “Lift Every Voice and Sing,” popularly known as the Black National Anthem.

Nero explained that the phrase was coined by scholar Evelyn Brooks Higginbotham and came to describe how “black activists always sought to put their best foot forward” to counter negative black stereotypes.

Nero and Chapman talked about two record labels, Motown and Stax, and their different response to the Civil Rights Movement and to the “image of respectability politics.” 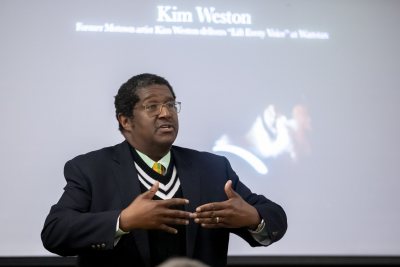 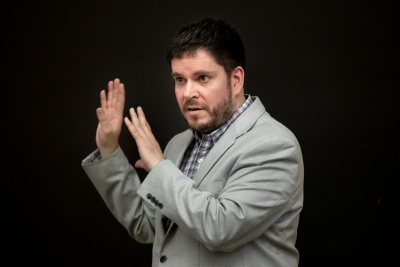 Of the two, said Chapman, Motown has always been known for engaging respectability politics in order to “appeal to a crossover audience” of white consumers.

Meanwhile, in its approach to selling records, the Stax label tended to move “away from that respectability politics and toward an embrace of black pride,” drawing heavily on the sounds of gospel, urban blues, R&B, and, to some extent, country music. Stax, along with Atlantic Records, was where soul music was most prominently recorded and cultivated.”

An example was the label’s sponsorship of Wattstax, a benefit concern in Los Angeles in 1972 on the seventh anniversary of the Watts riots, which featured a funky, soulful, improvisational, rendition of “Lift Every Voice and Sing” by Kim Weston.

Nero is the Benjamin E. Mays Distinguished Professor of Rhetoric, Film, and Screen Studies. Chapman is an associate professor of music. Both are members of the Program in African American Studies.

This term was also used in Nero and Chapman’s discussion, and was coined by scholar Imani Perry, author of the book May We Forever Stand: A History of the Black National Anthem.

Black formalism, said Nero, emerged “at the nadir of black life” in the late 19th century, explains Nero. That nadir came after “separate-but-equal became law of the land” with Plessy v. Ferguson and after “America said, ‘We don’t have to be concerned about black rights.’”

In response to “intense white supremacy,” Nero said, “we see an increase in black churches and civic organizations and black sororities and fraternities in colleges.” Perry describes the rituals that emerged to stitch together this social fabric as “black formalism.”

Importantly, “it is usually outside of the white gaze,” he added. “White people tended not to know about” these organizations. “They are what black people are doing as a means to produce pride among themselves.”

A song like “Lift Every Voice” becomes an example of this. Not just about respectability — ‘Black people can do classical music, too’ — but also about black people creating rituals for themselves beyond the white gaze.”

AK Wright ’17 used this term in a presentation that argues that America’s racially biased criminal-justice system — one that particularly harms black transgender individuals — can only be solved through its abolishment.

“One in two black transgender individuals has been incarcerated” in America, said Wright. “That’s a staggering number.” 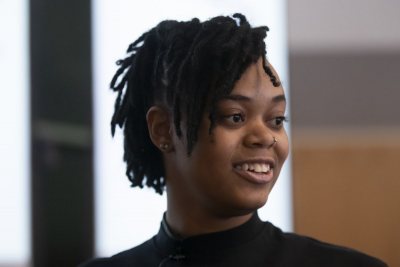 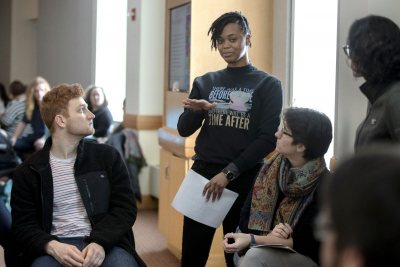 A doctoral student in feminist studies at the University of Minnesota, Wright uses the tools of decolonial feminism to “connect the legacies that we see in race, gender, and sexuality today” back to the origins of slavery in America and ideas about gender established by the continent’s white colonizers and those who profited from colonization.

In other words, decolonial feminism “understands that the root of gender- and race-based oppression lies in coloniality.”

This word was in the title of a session led by Trisha Kibugi ’21 of Nairobi Kenya. 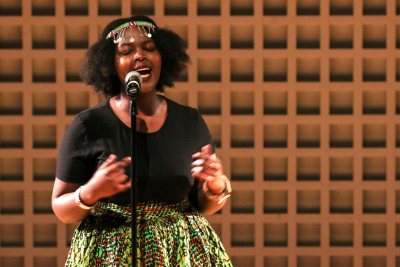 The workshop “Effective Allyship” taught participants that being an ally — which in this case means to support LGBTQ+ individuals — needs to be more than “signing a petition and giving yourself that pat on the back,” in the words of the session description.

Being effective at anything takes practice, the group learned. “You have to have real conversations,” said Kim Trauceniek, associate dean of students for campus life.

Having a real conversation means overcoming fear of making a mistake, because we all do. “I get things wrong every day,” Trauceniek said.

“But I keep trying.”

Video: ‘A remembrance of what our country should stand for’