“Next time, we need to get you guys on one of the big machines,” photographer Rene Roy told her subjects, who were posing in front of heavy construction equipment parked neatly by a large excavation.

“I’d like that,” said one of the subjects, Sarah Pearson ’75, Bates’ vice president for college advancement. 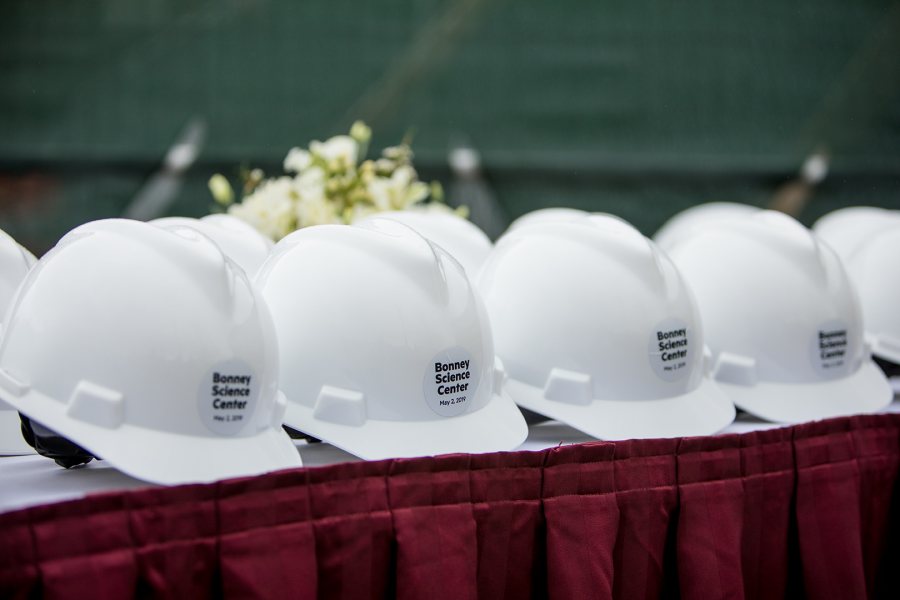 It was a drizzly May 2 and a couple dozen people had gathered on the science building construction site for one of the big holidays in the construction world’s calendar: the ceremonial groundbreaking.

And this was no ordinary groundbreaking. It was also the debut of the building’s formal name: the Bonney Science Center, honoring both the couple whose generosity made the center possible, Michael Bonney ’80 and Alison Grott Bonney ’80, and the extended Bonney family, whose connections to Bates date to the early 1900s.

Preceding a public fete held in Memorial Commons for the building and the Bonneys, the groundbreaking was a smaller gathering. In addition to Michael and Alison, six members of the Bonney family representing three generations were present, including Michael’s parents, Wes Bonney ’50 and Elaine Bonney.

Members of the Bonney family representing three generations were present.

Spencer and Schaeffner offered brief remarks, but most of the speechifying was reserved for the following campus-wide event, which also featured cupcakes and music, and less mud. 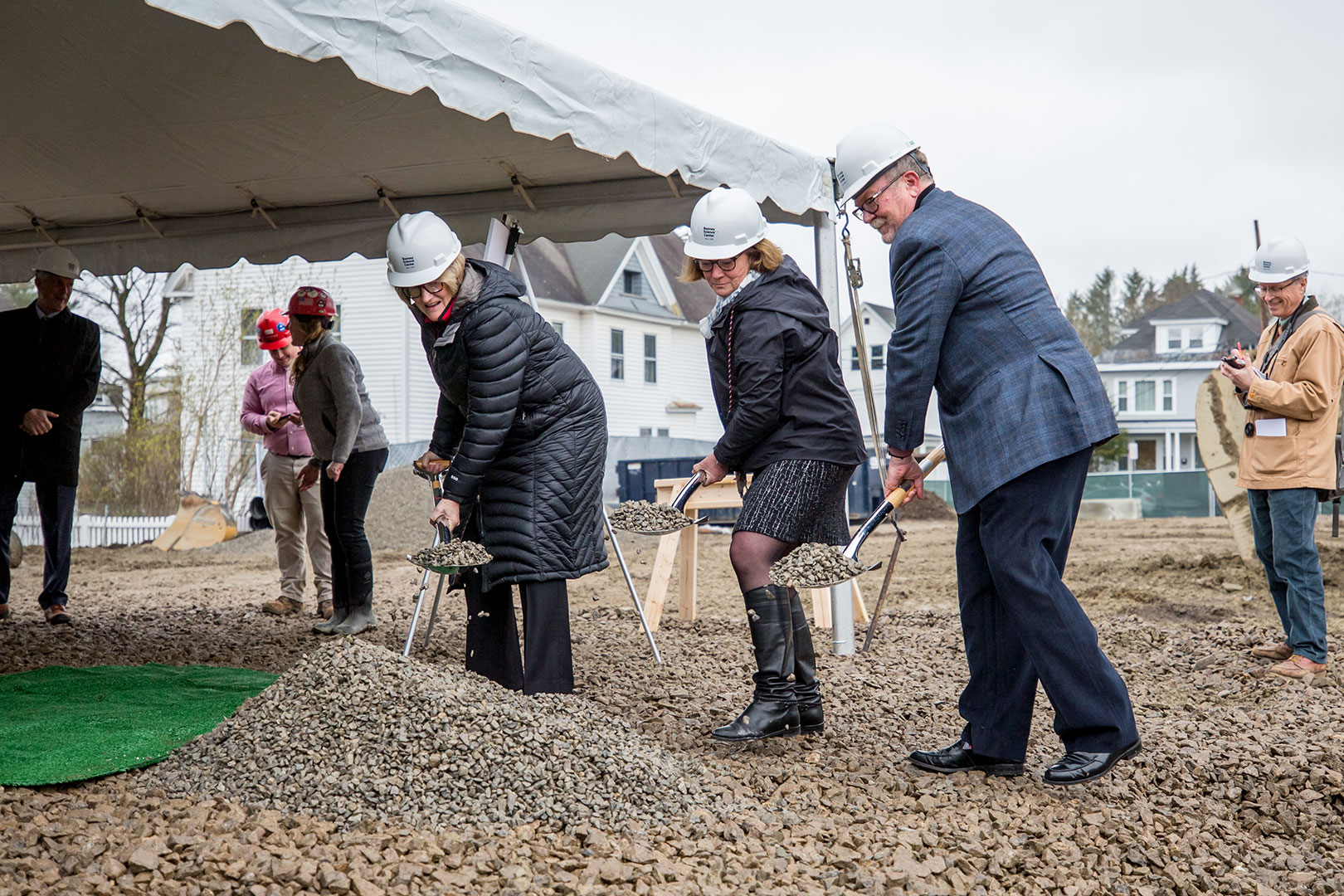 The ritual gravel-flinging essential to a groundbreaking was undertaken by Spencer and various Bonneys, mostly Michael and Alison, in multiple passes directed by the photographers. Gleaming engraved spades had been provided for the occasion, as were enough brand-new “Bonney Science Center” hardhats to fill a table.

It was an easy and lighthearted occasion, and one of the many laugh lines came from Consigli project executive David Thomas: After the ceremonial gravel toss into the science center’s foundation hole, he said, there would be only 1.2 million shovelfuls of material left to move. So much for those shiny spades.

South parking: On nearby Vale Street between Nichols and Wood, Consigli is undertaking a related project that, as workers show up every day to build the science center, will help preserve on-street parking for residents and Bates folks. 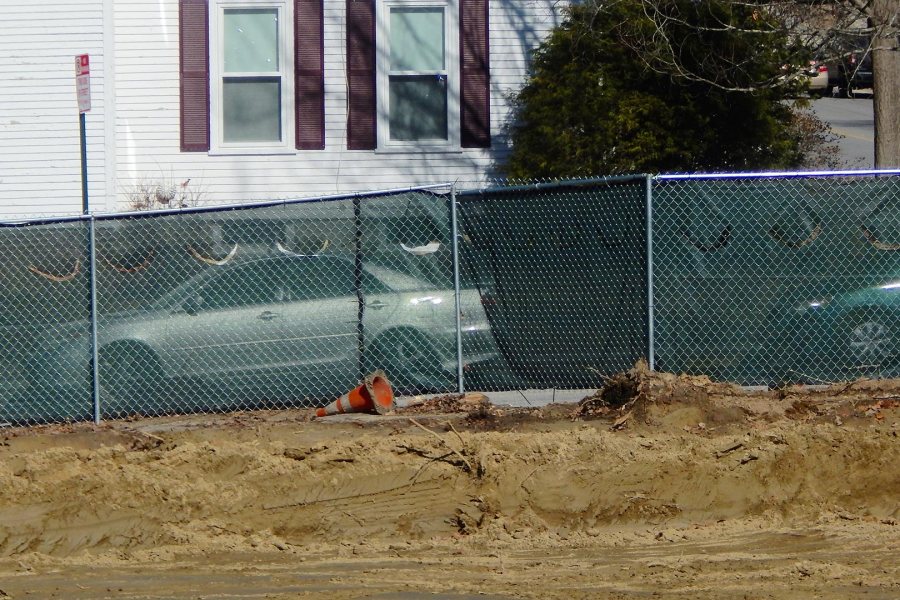 On-street parking around the south end of campus is a precious commodity. (Doug Hubley/Bates College)

In vacant grassy space a block south of the science center site, the construction firm is creating new parking expressly for its own employees and those of the subcontractors. “This will minimize the impact to the campus parking supply during construction,” says project manager Streifel.

Pile on: By the day of the groundbreaking, the heavy equipment that sat decoratively during the ceremony had already removed a few million shovelfuls. The first phase of preparing the science center’s foundation hole, excavating to a uniform five-foot depth across the building footprint, had been completed a day or two prior to the groundbreaking.

Materials and equipment were in place for the second phase: shoring up the walls of the hole with so-called sheet piles. These are long, narrow metal panels, channeled for rigidity. Each long edge is curled such that adjoining panels can locked together (imagine curving your fingers and interlocking your hands, as for one of those isometric arm exercises).

One at a time, the piles are submerged several yards into the earth by a so-called vibratory (or vibro) hammer, a big hydraulic machine that perches atop the pile and creates rapid up-and-down vibrations. A car-sized power unit is tethered to the hammer by a bundle of hoses. The hammer’s weight and the persuasive effects of vibration on the soil make the pile sink.

After a test run on May 2, production pile-setting began the next day. A small crew from subcontractor H.B. Fleming of South Portland, Maine, is doing the job. 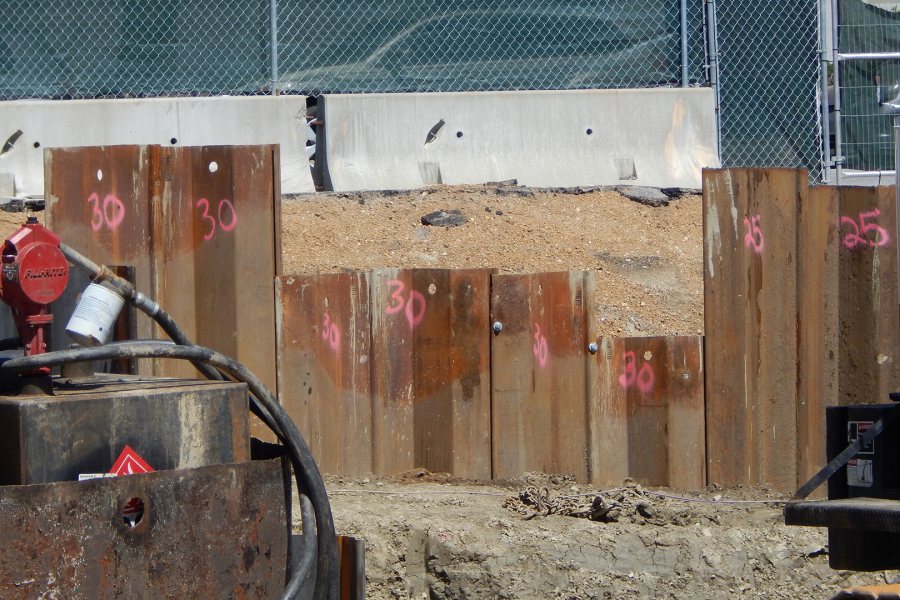 Let’s add a new pile to a row. Along the front of the row is a temporary structure of girders (which become “H piles” when they are implanted vertically). A crane hoists a pile by one end, floats it to the designated spot, and lowers it such that the curled edge locks into the adjacent panel. That helps keep the newcomer upright.

The crane operator eases the pile down and the ground workers use a giant clamp and other fasteners to fasten the loose edge, temporarily, to a horizontal girder. Then they pull ropes to release the crane’s clamps from the pile, and the crane, with a few engine revs and puffs of diesel smoke, picks up the vibro hammer.

Once the hammer is clamped onto the sheet, looking like a cherry popsicle (but muddier) on a long stick, one crew member operates it via a remote-control box. The other stands close to the new pile, checks it with a level as it sinks, and adjusts clamps and fasteners. Typically the crew does a “rough set,” driving a quantity of piles partway, and then after a quality check, finishes driving them. Just a bit of the piles remains visible. 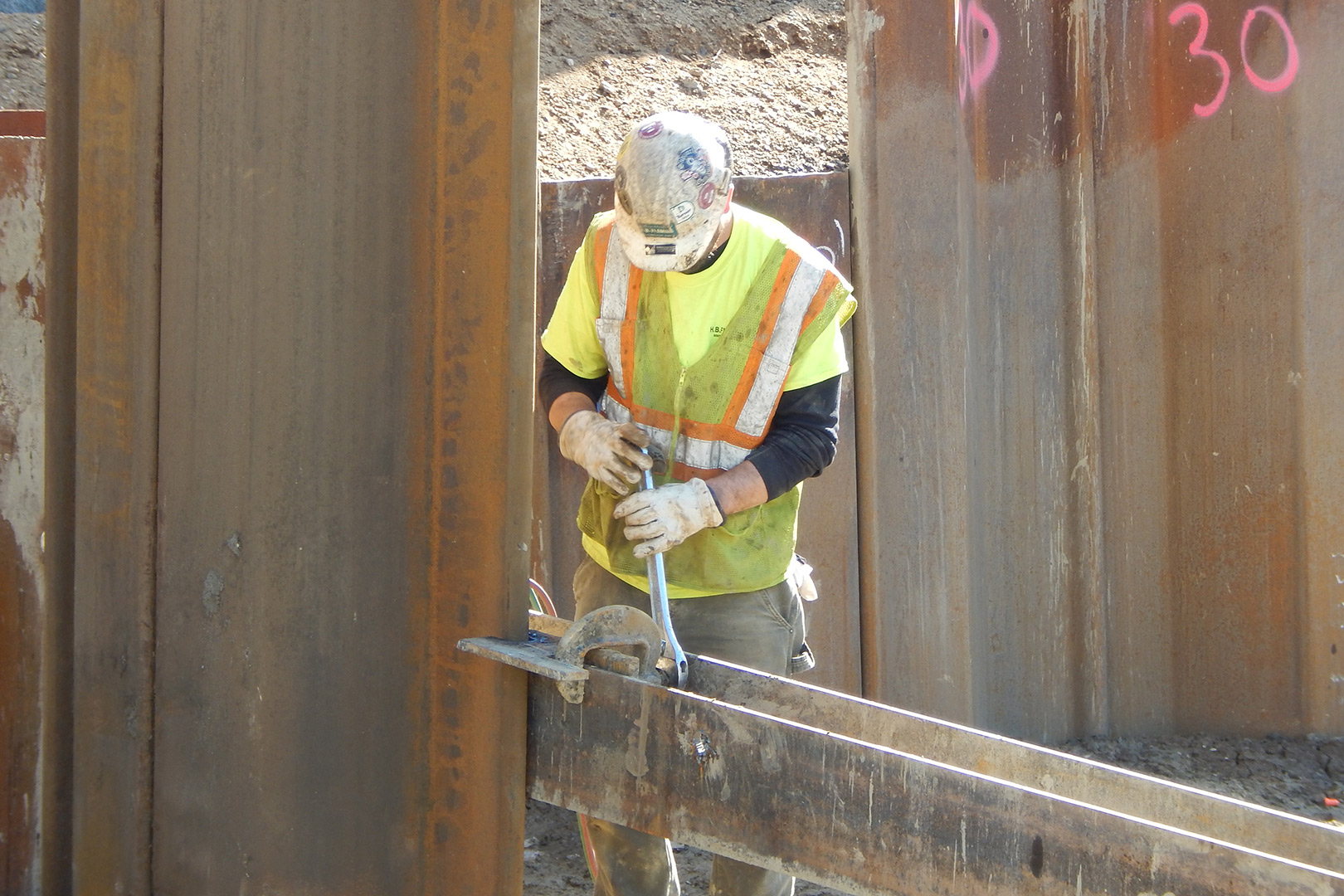 An employee of South Portland subcontractor H.B. Fleming tightens a clamp holding a sheet pile in place on May 6. (Doug Hubley/Bates College)

All told, unless they hit a rock or other obstacle, they can drive a pile in about 10 minutes.

Unlike the CLONG-CLONG-CLONG of a conventional pile-driver, the hammer makes an enveloping shudder that’s intense if you’re close to it and surprisingly mild if you’re a few dozen yards away.

The choreography among the crane operator and the two workers on the ground is captivating. You get the impression that the operator could use the crane to turn over a playing card. Because of vibration and engine noise, hand signals — pretty subtle ones — are key to communication.

The crew aims to set six piles a day, says Consigli’s Stacey Harris. Forty will be planted all told. By May 8, the Nichols Street side of the hole appeared fully empiled, if you will, and the long Campus Avenue side was about done.

Wasting no time, an excavator returned to the foundation hole on May 9 and started digging along the completed sheet-pile wall. This is to provide access for workers who will insert 12-foot long anchoring pins, like really long corkscrews, through the piles and into the dirt to hold everything together.

Once that job is complete, in a couple of weeks, wholesale excavation will resume.

Feeling drained: Frequent rains and even snow during April left a lot of water standing in the excavation. Most of it was pumped to the catchment basin at the back corner of the work site.

But Chris Streifel, Bates’ project manager for the Bonney Science Center project, reminded us that in this endeavor, rising water is as much a consideration as the rain that falls. 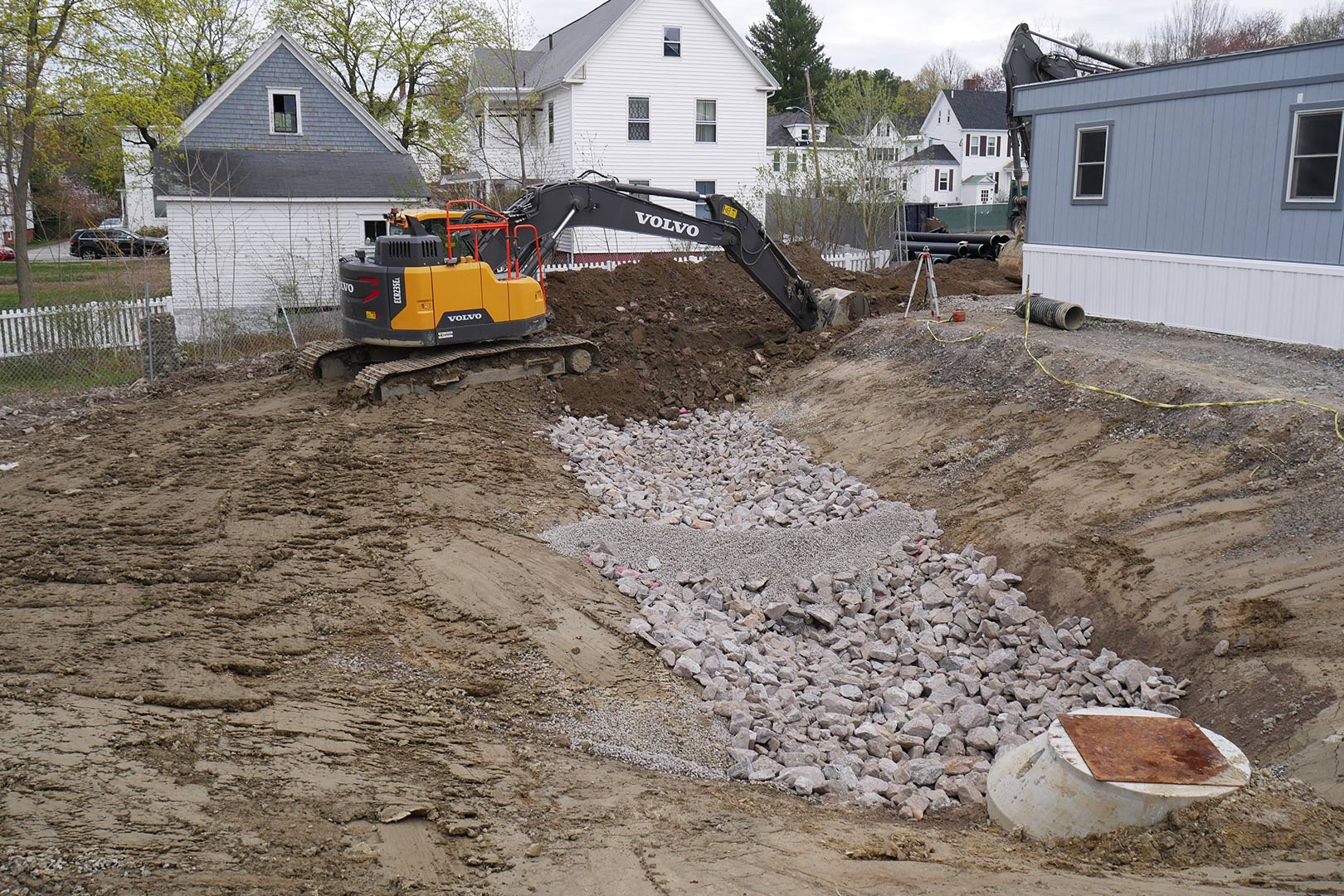 Trenches are being dug around the Consigli field office to accommodate pipes that will carry water from the science building foundation site to the catchment basin shown here. (Doug Hubley/Bates College)

The excavation will go as deep as 20 feet in spots, and it’s possible that it could breach the groundwater table, he explains. That did not happen with nearby Kalperis Hall, four years ago, but the Bonney dig will go deeper. “And we’re downslope a little bit from Kalperis.”

“It’s absolutely something that’s on people’s minds,” Streifel says. “We’re thinking optimistically” — and taking steps. Water that enters the hole in quantity, from heaven or earth, will be pumped to the basin in the southeast corner. A crew from the local firm Gendron & Gendron is cutting trenches now for pipes that will convey the water.

In other watery news, during the fourth week of April workers from the city of Lewiston, Consigli, and Gendron got together to tap into a high-pressure municipal water line and run a connection to the perimeter of the science building site. This will be the building’s water supply for drinking, washing, and fire suppression.

“The city upgraded that line last year to give us high-pressure service for the science building,” Streifel says.

Finally, the south fence of the Bonney Science Center site recently gained a layer of quilted silvery-gray panels. For close neighbors, these ameliorate noise coming off the site, and block views that don’t fascinate everyone as much as they do Campus Construction Update.

Can we talk? Please send your thoughts about past, present, future, and speculative Bates construction projects to Doug Hubley. Please put “Construction Update” or “Empiled? Are you licensed to make up words?” in the subject line. 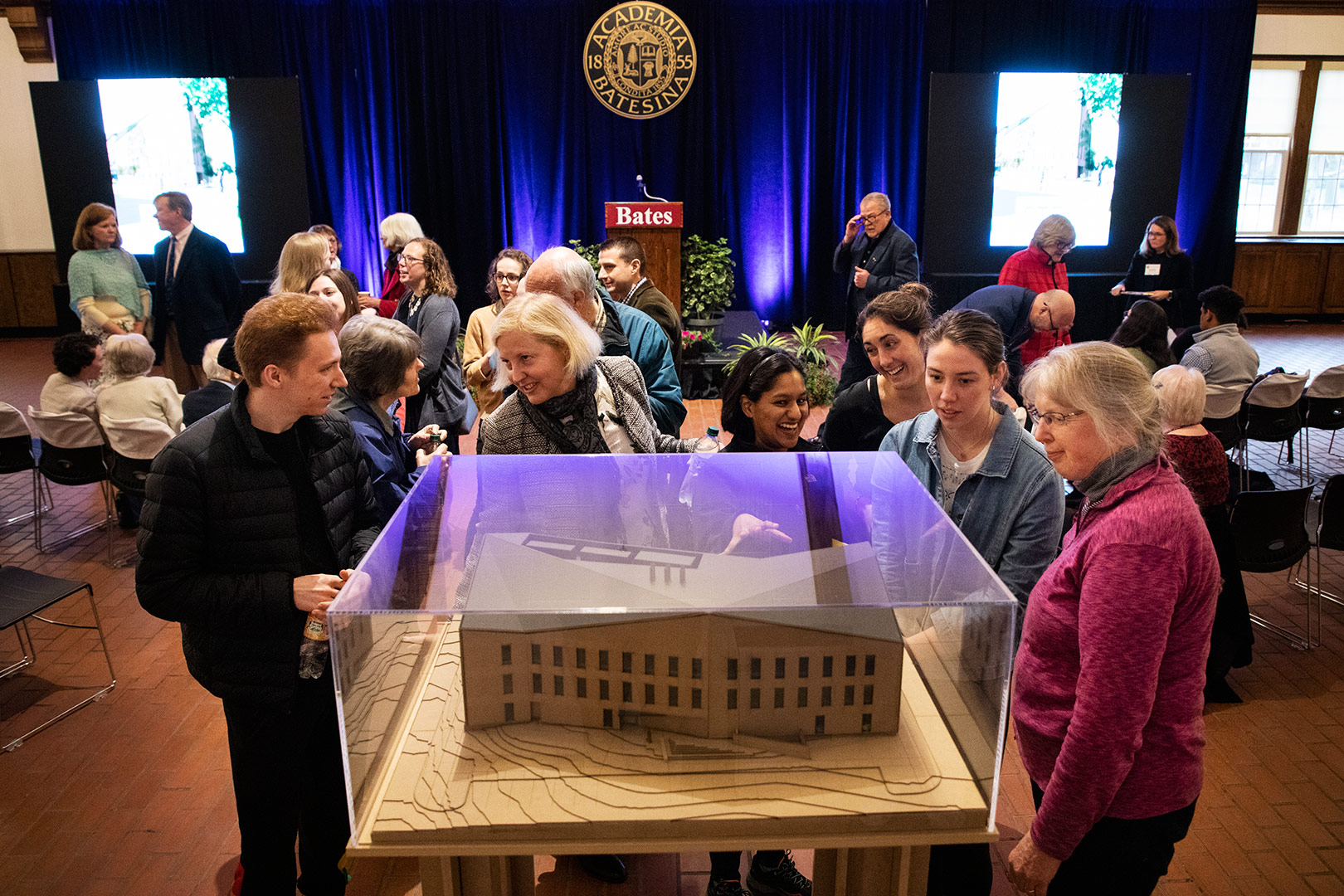 Shortly before the start of a campus-wide celebration of the groundbreaking of the Bonney Science Center on May 2, attendees inspect a model of the building in Memorial Commons. (Theophil Syslo/Bates College)