After a 22-month closure for exterior restoration, including 13 months behind a green construction fence, a Bates College landmark will again welcome the campus community — subject, of course, to COVID-19 precautions — starting sometime in August.

The Peter J. Gomes Chapel will return to service (or, if you like, services will return to the chapel) following a restoration project that has included:

“Gomes Chapel is re-opening, in all of its beauty and sanctity, amidst a powerful moment of need for sacred space,” says the Rev. Dr. Brittany Longsdorf, Bates’ multifaith chaplain. “In a time where members of our community are seeking spaces that are spiritual, centering, quiet — and screenless — more than ever before, we envision the historic Gomes Chapel entering into a renaissance period embraced by our campus in new and creative ways.

“May all feel warmly welcomed there.” 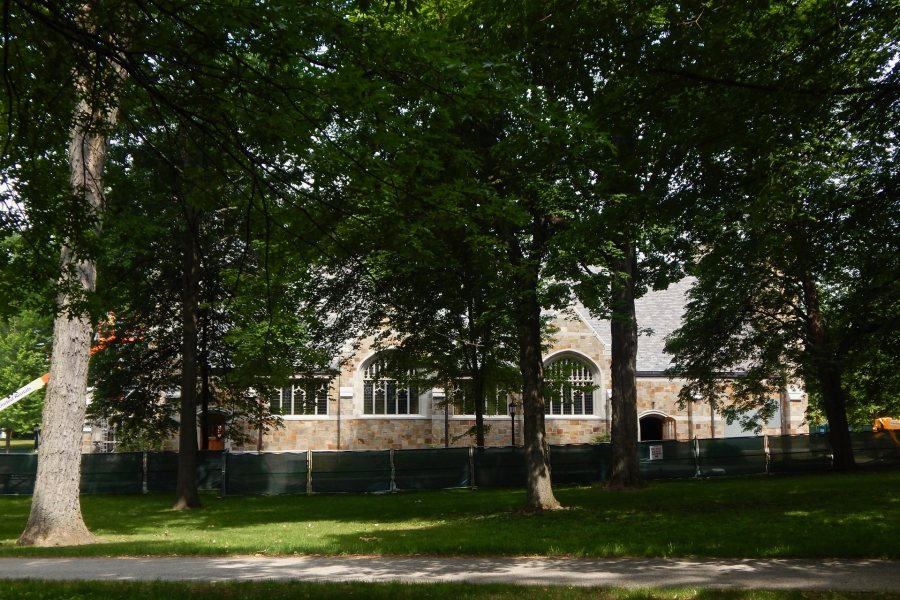 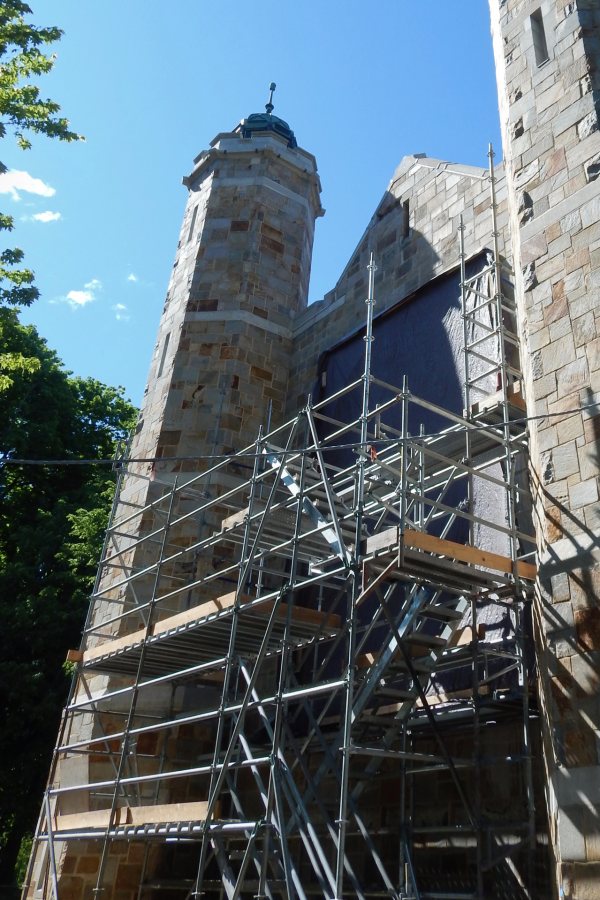 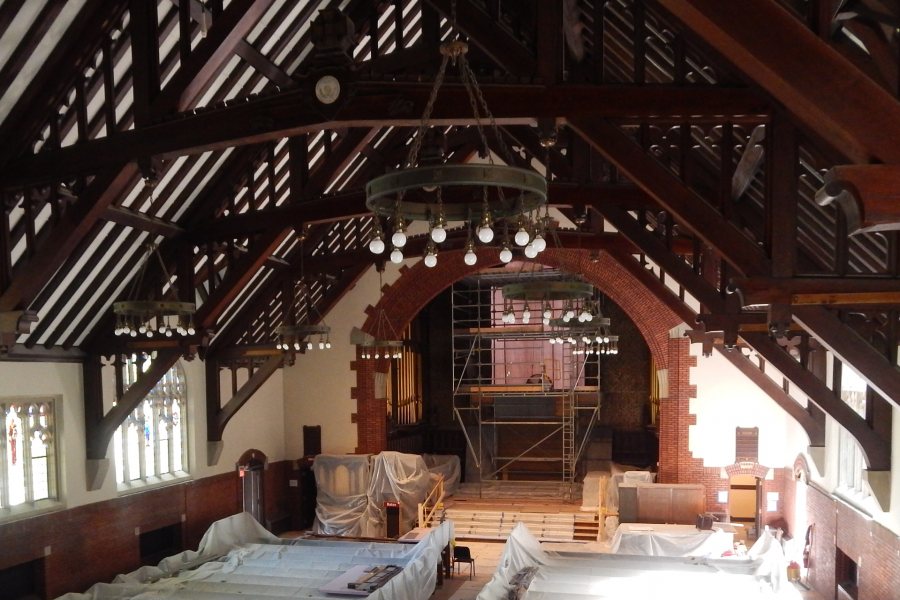 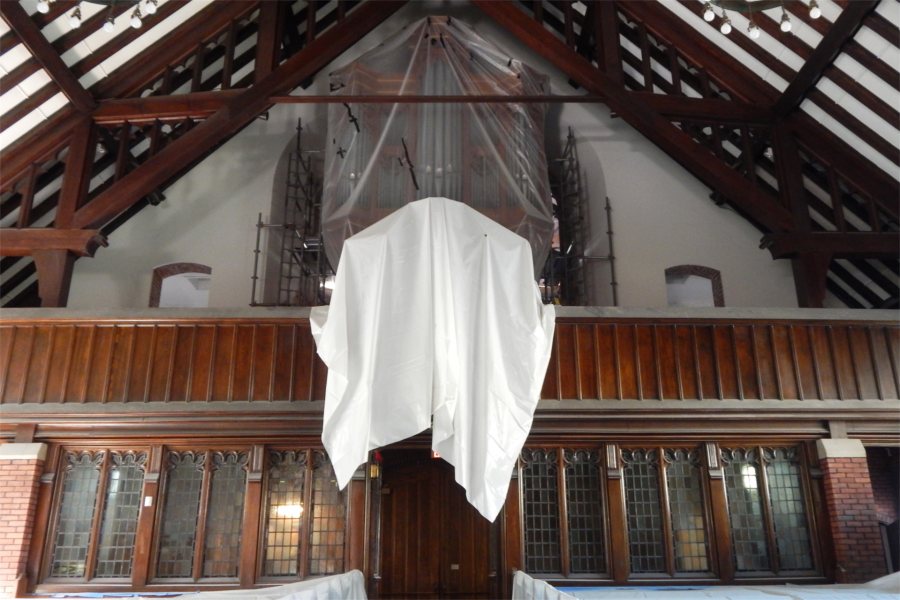 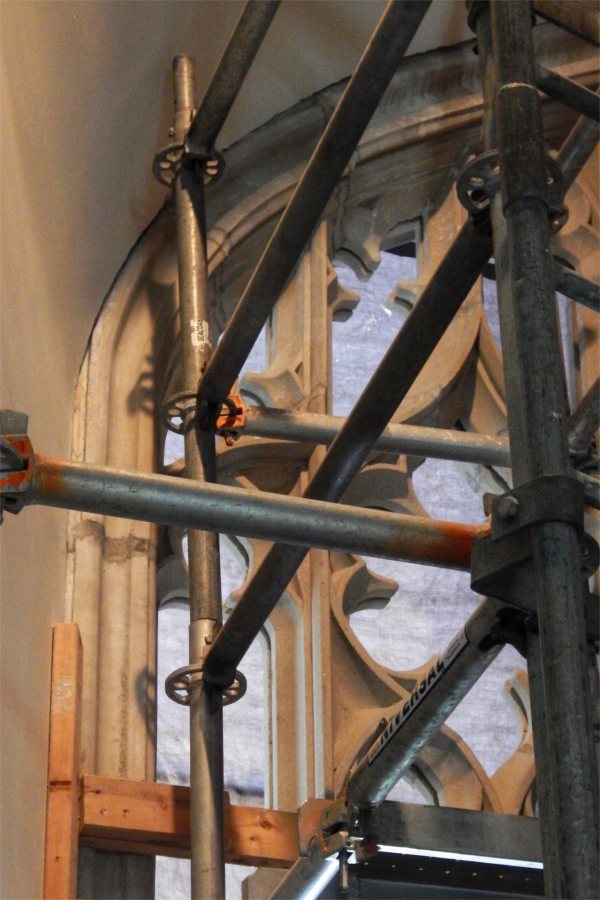 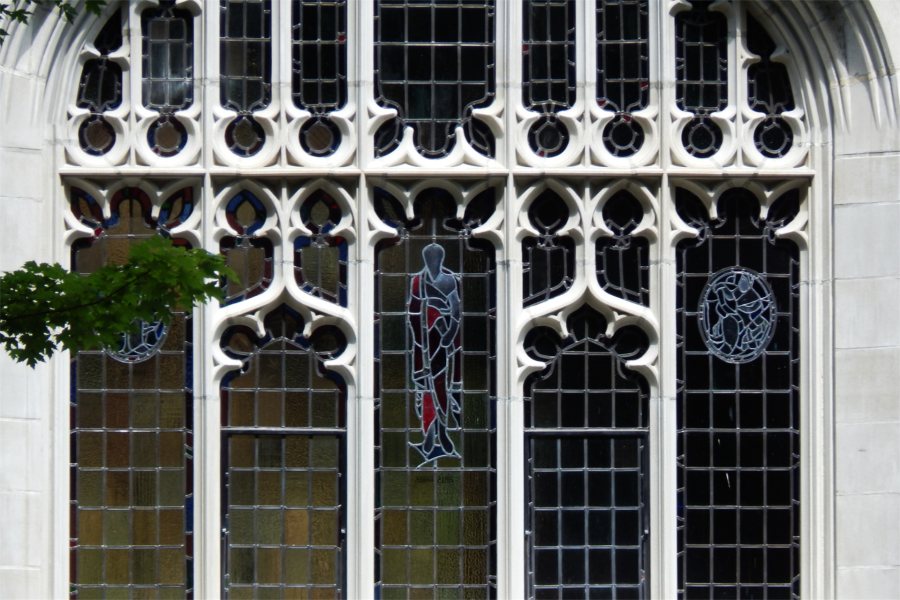 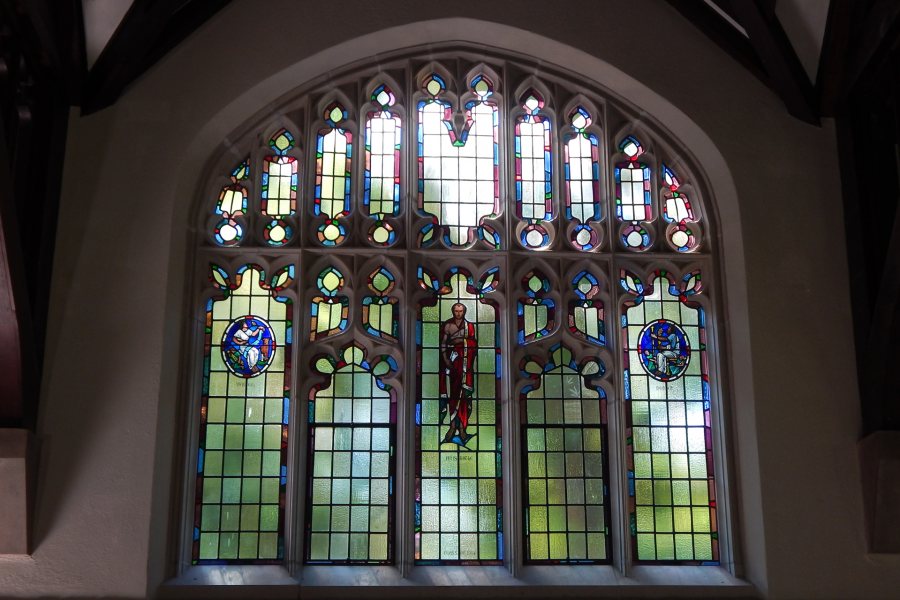 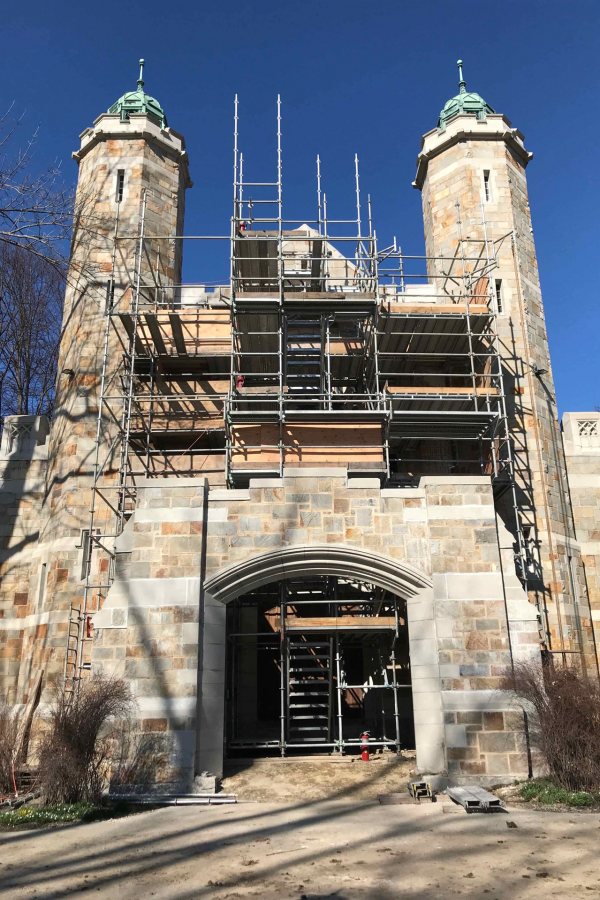 As we’ve reported, construction management firm Consigli Construction has most recently focused on the north and south faces of the chapel. The south wall, looking down College Street toward downtown Lewiston, is the location of the portico and a large non-pictorial window. (Interior views of that window are largely blocked by the chapel’s primary organ, the 36-stop Wolff instrument installed in the choir loft in 1982. A second, smaller organ sits behind the altar.)

Most of the decorative windows have been rebuilt by Jim Nutting ’76 of Lisbon, Maine, known for his original creations under the Maine Art Glass brand.

Nutting started working with glass the year after he graduated from Bates and has been doing it full time since 1999. “I always admired stained glass,” he says. “And I love the colors — the color was always exciting to me.”

A biology major, “I took one art class and that was with professor [Donald] Lent, when he was there. One of the few A’s I got at Bates.”

Where Nutting’s focus is on the glass, Matthew Kendall handles the field work for the pair’s restoration projects, doing business as Vintage Glass Works. They have collaborated on such projects for a couple of years. “I’m more on the job site, whereas Jim is more in the studio,” Kendall explains. “He’s more the artist, I’m more the contractor.”

Reinstalling a rebuilt work of stained glass poses its own painstaking demands. “You’re doing restoration work based on a set of plans…and hoping that what you’ve created in a shop environment fits an opening that hasn’t even been constructed yet,” explains Kendall, who will likely finish installing the restored south window this week. “So it’s a little unconventional in that process.”

Yet, he adds, “we’re obviously very close to being done with the project — so, so far so good.”

Masons and other trades for Consigli will complete the new portico roof once the staging for the window has been taken down. Through July, work on the portico railings and steps will conclude the portico restoration. Steps for the chapel’s side entrances will be replaced at the same time.

Normally the north wall is dominated by a large, mind-bendingly intricate chancel window that, in stained and hand-painted glass, portrays Christ as the Lamb of God, flanked by Matthew, Mark, Luke, and John. Consigli masons are now prepping the window opening for the return of the restored glass in mid- or late July. “They will begin placing the sill stones and tracery next week,” says Shelby Burgau, the Bates project manager overseeing the work.

Nutting points out that the north window stands out from the other stained glass in Gomes. In particular, the nave windows with their formative figures of Western Civ have been quite consistent: “We’ve had basically six or seven different colors of glass that we’ve been working with. Other than the intricate detail of the characters in there, all of the matrix glass has been pretty uniform throughout,” he says. (He has also replaced all the original zinc strips that hold the glass pieces together — strips known as “came” — with the more traditional lead.)

But the north window “is totally different than all the rest,” he says. “Every single piece of glass in that entire window system” — totaling in the thousands, in fact — “has been painted. So any of the broken pieces that we have to replace, I will also have to paint and fire them in the kiln. The replacement of any glass is going to be a lot trickier.”

Once the big window is back in place, there will remain the task of re-installing the decorative woodwork around it in the chancel, including carved figures of St. Augustine and St. Thomas Aquinas that have been loitering in the nave awaiting their homecoming. Consigli will be bringing in specialty carpenters for that.

Exterior masonry repairs on the north and south walls were done by mid-June. And the final steps in the Gomes restoration will be a professional cleaning of the interior and, once the construction fence has been taken down, tidying up the lawn and plantings around the building.

The project just ending is the second in a two-phase restoration of the 1913 chapel’s exterior. The first phase took place nearly a decade ago and was concentrated on the building’s roof and turrets (although one stained glass window, on the College Street side of the building, was rebuilt as a demonstration project at that time). Both phases were necessitated by the forces of time and penetrating moisture.

The chapel was inspired by the 15th-century King’s College Chapel at Cambridge University and named for the late Rev. Peter J. Gomes ’65, a larger-than-life cultural presence among the Bates and Harvard communities. The building’s closure in 2018 left the campus without not only a sanctuary for religious expression, but a venue for some of its highest-profile events — notably the worship service and the keynote address that are key to Bates’ Martin Luther King Jr. Day programming.

The chapel also sends important visual messages. By pointing its main entrance toward downtown and showing a (usually) unconcealed western wall to College Street, just steps away, it tells the greater community: Welcome. But on the Historic Quad side, partially screened by lush old trees and settled into its place like it’s been there 1,000 years, it tells the Bates community: Here you’re safe to be who you are.

That said, policies regarding use of the facility in the context of the coronavirus pandemic are still in development. “We’re still working out our strategy for social distancing in the chapel in the fall — it’s a long process,” says Longsdorf. “We’re collaborating with the Dining, Conferences, and Campus Events office, as the space will likely be used by other groups and classes in a way it hasn’t before.”