The next big objective in the construction of Bates’ new Bonney Science Center will be the driving of piles, dozens or hundreds of them, to support the building’s foundation. That work could begin as soon as the week of June 10.

This does not mean piles as in “heaps.” Instead, these piles will consist of steel pipes driven 40 or 50 feet deep into the bottom of the building’s foundation hole, and then filled with concrete.

Nor should these pipe piles be confused with the sheet piles that subcontractor H.B. Fleming has been sinking for more than a month. Those interlocking metal sheets are shoring up the sides of the foundation hole, whereas the pipe piles will stabilize the soil beneath the hole and eventually beneath the building. They’ll be capped with steel plates that underlie the foundation.

Between the two systems, all that pesky earth will have no choice but to keep still and behave. 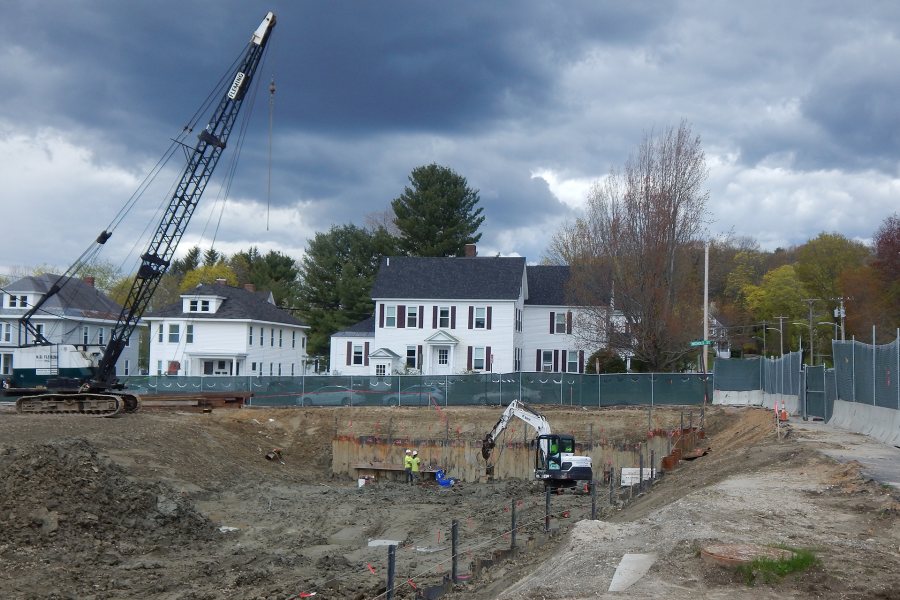 Columnar piles like the pipes are often driven down to bedrock so as to transfer a structure’s weight to something really solid. But the pipe piles likely won’t go that deep, explains Chris Streifel, who’s managing the science building project for Bates Facility Services.

“It doesn’t necessarily have to go to bedrock,” he says. Instead, the piles will improve the site’s weight-bearing capacity by displacing the soil, effectively stiffening and reinforcing it.

Compared to other systems, the pipe piles allow for greater monitoring and control during the driving process, he says. The pile-driver is equipped to transmit “real-time information about the condition of the support that’s being driven,” as well as the soil it’s penetrating, Streifel explains. “Every time the hammer strikes the pile, you get a sense of the stiffness [from resistance] and the anchorage that it’s providing.”

Water is also a factor favoring the pipe piles. A different choice for soil reinforcement would be so-called rigid intrusions, which involve injecting concrete directly into the ground. But “water and concrete aren’t the best of friends, and the ratio between the two is very important,” explains Stacey Harris, project superintendent for Consigli Contruction, the firm overseeing the science-building job.

At the Bonney site, the piles will be sunk through wet marine clay, and 2019’s soggy spring has introduced even more moisture, putting unprotected concrete at risk of failure. Encasing the concrete in a pipe is a good way to protect it, Harris says.

So what is this crazy soil 40 or 50 feet down that needs to be reinforced? Is it more of the glutinous and seemingly endless clay that subcontractor Gendron & Gendron and its excavators have been removing for weeks as they’ve dug the hole? Yes and no, says Streifel.

“That’s a really thick clay layer,” he allows. “I don’t think we’ll see the bottom of it during our excavation.” But as revealed by core samples taken in anticipation of this project, he notes, “below the clay layer is a series of sandy and silty layers.”

Still farther down, maybe 70 feet or more, is bedrock — but, as noted, the pipe piles likely won’t go that deep. As a reference, the excavation for the science building foundation will be about 25 feet at its deepest. (And as a different kind of reference, the college’s administration building, 1964’s Lane Hall, was built atop 144 piles.) 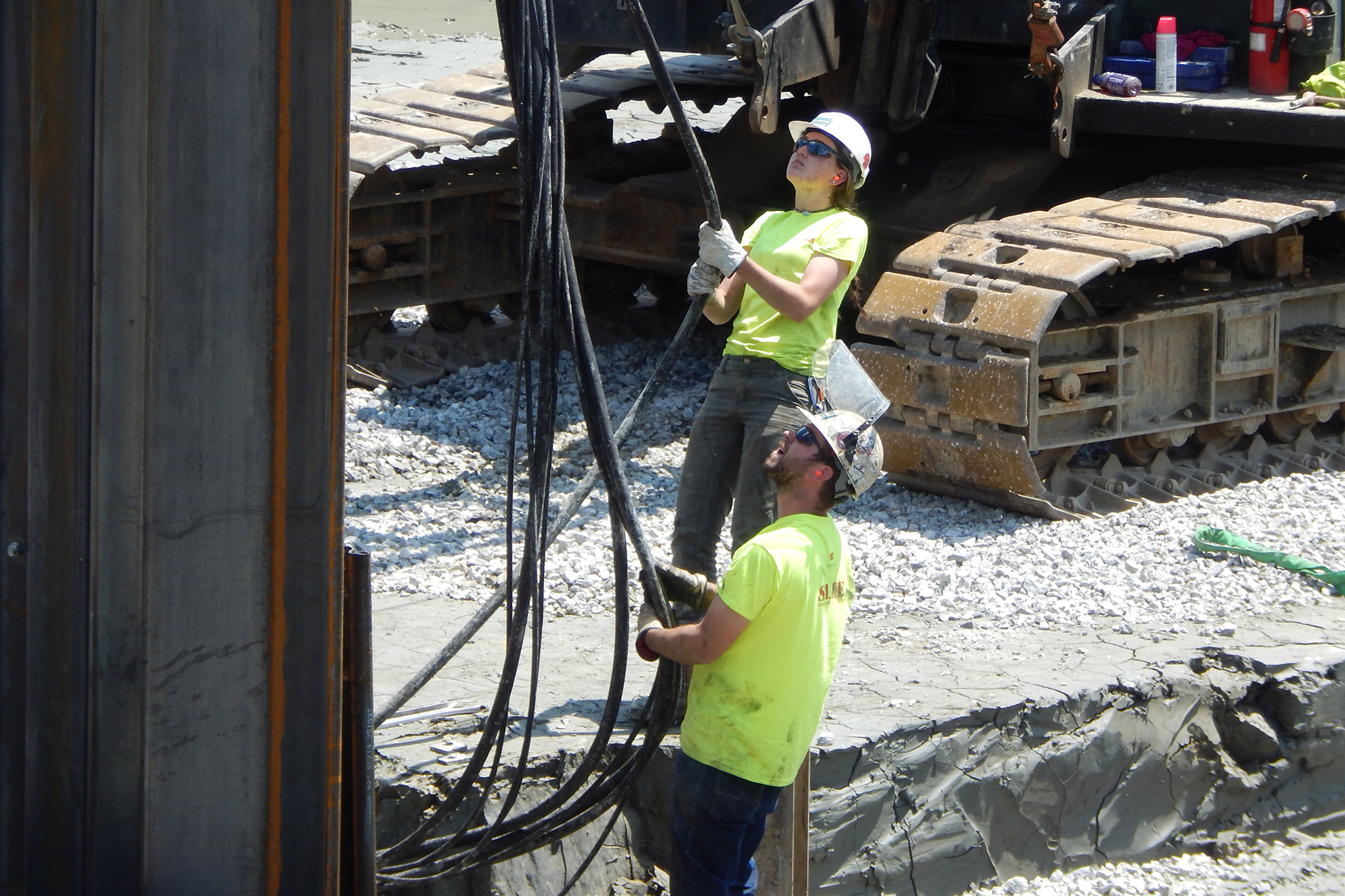 Two H.B. Fleming employees guide the vibro hammer into position atop the sheet pile at left. They’re pulling hoses that connect the hammer to its power unit. (Doug Hubley/Bates College)

Based in South Portland, Maine, H.B. Fleming is designing and will carry out the pipe-pile installation. Unlike the sheet piles, which were shimmied into the ground by something called a vibratory hammer, the pipes will be sunk the old-fashioned way, one blow after another, by a pile-driver. It will definitely be audible in the vicinity, Streifel says — reminiscent of the last pile-driving job at Bates, in 1997 for the construction of Pettengill Hall.

The pile job should be complete sometime in July, and then it will be time to start pouring concrete footers for the foundation itself.

Down in the Hole: It’s been quite captivating to see the science-building foundation hole shape up, or down, since it first became discernible around the second week of April. One week all you see is construction machinery frolicking on an expanse of dirt, and the next week you’re all, “Well, look’ee there! Foundation hole!” 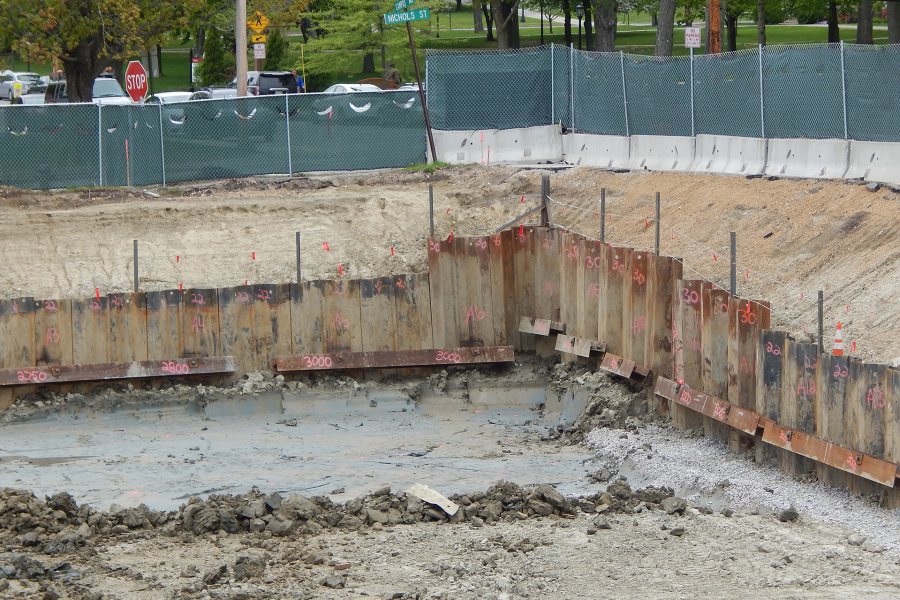 With the Historic Quad in the distance, this view of the northwest corner of the science building site shows how sections of beam are used to reinforce the retaining wall. (Doug Hubley/Bates College)

And the hole has become impressively deep, although Streifel says the end of the digging is in sight. “This is what I’ve been trying to convey to everybody,” he says. “It’ll be a deep hole when it’s all done,” with more of a vertiginous big-city construction feel than Bates folks may be used to seeing.

The sheet-pile retaining wall lining most of the hole certainly adds to the metropolitan aesthetic, especially since workers reinforced the wall. It looks pretty serious: First, using a driver mounted on a small excavator, they went around and screwed long, auger-like anchor pins into the earth banked behind the sheet piles. Then they welded short sections of H-beam to the protruding pin ends to hold the whole works together.

Each sheet “is basically holding that whole slope back,” Streifel explains. “There’s a lot of pressure trying to push that sheet pile back into the hole. The anchors resist that pressure, and the beam gives it rigid support to hold that force and distribute it across the face of the whole pile.”

Along with the sheet-pile driving, a source of fascination for us has been the afore-mentioned marine clay. What gives clay its personality is for a geochemist to explain (although we are eager for the chance to drop the term “flocculation” at a dinner party), but what we can say is that there is a lot of clay underlying Bates and its environs. 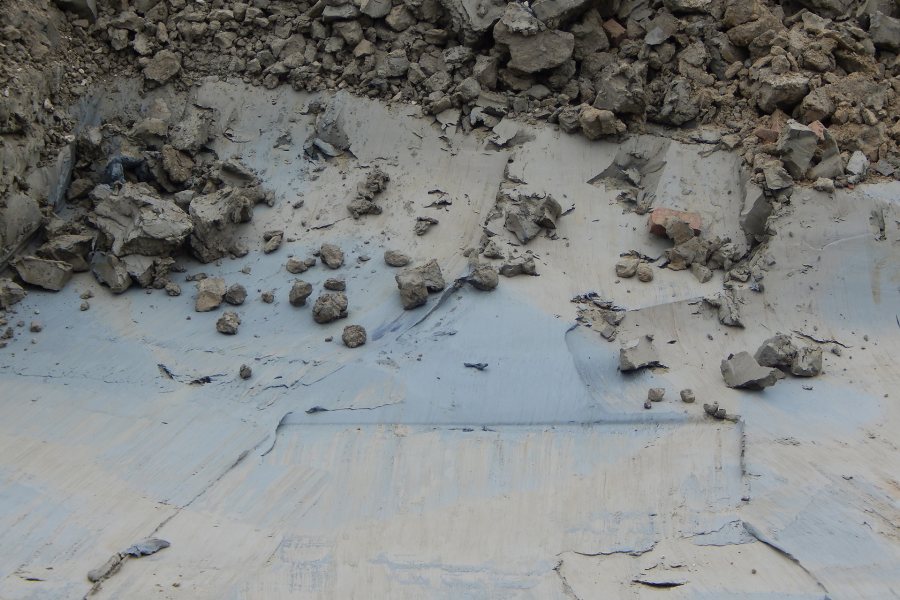 Marine clay on the floor of the Bonney Science Center foundation hole shows marks from the scoop of an excavator. (Doug Hubley/Bates College)

The personality of clay? Damp, heavy, and, paradoxically, both slippery and clingy. When an excavator claws at it, the clay rolls up like a wave hitting the beach. It drops out of the scoop in solid clumps. It comes in subtly different colors and it retains impressions, so the floor of the hole rewards some good long looking, at least if you’re us.

The people dealing with it have a contrasting viewpoint. “Clay is not ideal,” says Harris. “It’s very slippery for the crews to walk around in. Also, when it rains, water sits on the top and doesn’t soak in. We often have to pump it out of the hole.”

Another clay characteristic is that a skilled excavator operator can carve out perfectly rectangular, crisp-edged hunks of clay, just like cutting brownies out of the middle of the baking dish, which we were warned never to do (along with cutting the point off a new wedge of cheese). Such a phenomenon appeared in early June in the form of a straight-walled, crisp-edged trench forming a squared-off “U” in the foundation hole. 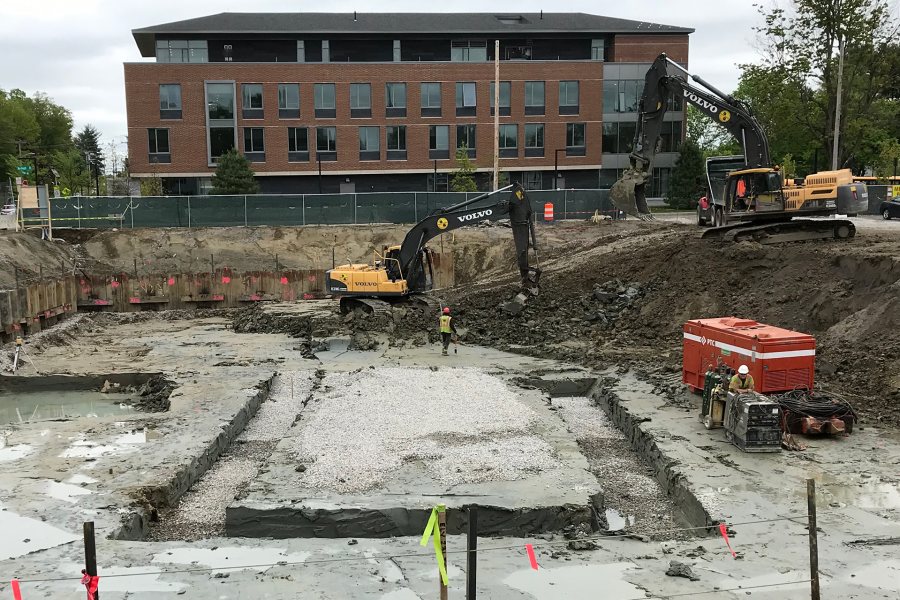 Shown on May 30, this U-shaped trench will become a site, six to eight feet deeper than the prevailing level, for wastewater collection tanks and the base of the elevator shaft. But first, sheet piles will shore up the walls of the trench, and only then it will be fully excavated. (Doug Hubley/Bates College)

This trench will become the deepest part of the hole, as much as eight feet deeper than its surroundings. Ultimately the base of the elevator shaft will go here, as will tanks where sewage, stormwater, etc. will be held before being pumped into the city collection system — which is well above the eventual level of the tanks.

This week, that trench has been a kind of microcosm of the entire hole. Gravel was laid in the well of the U (or its counterform, as a typographer might say) to make a stable base for Fleming’s crane. Then the sheet-pile team used the crane to plant a wall around the outside of the U, to bolster the walls of the trench. Next, the inside of the U will be dug down to its final depth. 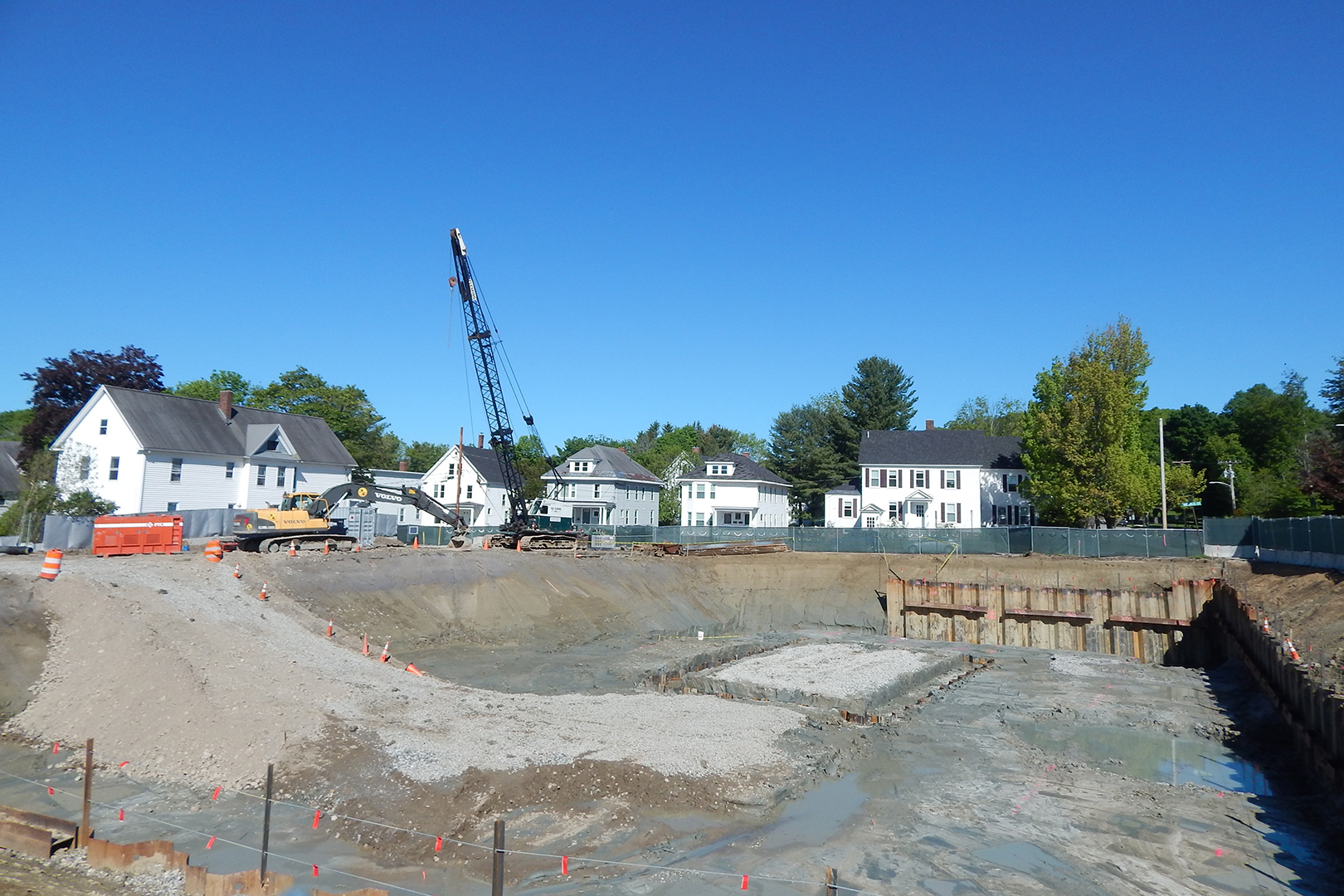 The construction site is quiet at mid-morning on June 7, the Friday of Reunion 2019. Note the tops of the sheet piles barely visible around the rectangle in the foundation hole: That spot will be dug down another eight feet or so. (Doug Hubley/Bates College)

Finally, in the realm of construction-site convenience, last week Consigli was finally able to open the long-awaited Gate B, on Nichols Street. The gate had been blocked by an adjacent utility pole, and the pole couldn’t be removed until all of its many cables were shifted to another pole.

With the second gate, the constant parade of dump trucks hauling away clay will be able to leave without backing up, which is awkward in the tight confines of the Bonney site.

Speaking of cables, an electrical panel connecting the work site to Central Maine Power was installed at the corner of Campus Avenue and Bardwell Street this week. Once feeder cables are run around the site, the panel will supply juice for tools, chargers, lights, Campus Construction Update’s espresso machine, and other workplace essentials. 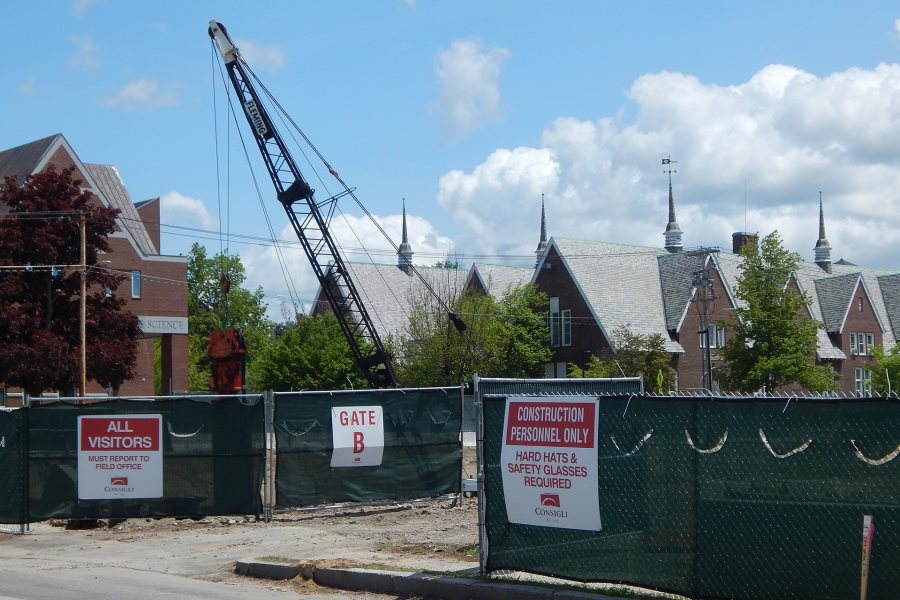 Consigli Construction opened Gate B, on Nichols Street near the former location of the Bates Communications Office, at the Bonney Science Center construction site in late May. (Doug Hubley/Bates College)