My Maine Summer: Charlie Richardson ’84 and an ‘education at any time’

By Emily McConville — Published on September 5, 2019

“Education can happen at any time,” says Charlie Richardson ’84.

That’s the philosophy Richardson has developed over 30 years at Kieve Wavus, a renowned summer camp on Damariscotta Lake. As education and operations director, he’s responsible for much of the camp’s administration, but any given summer day you’ll most likely find him out and about with the boys and girls on the lake, or the beach, or somewhere deep in the mountain wilderness of Maine. 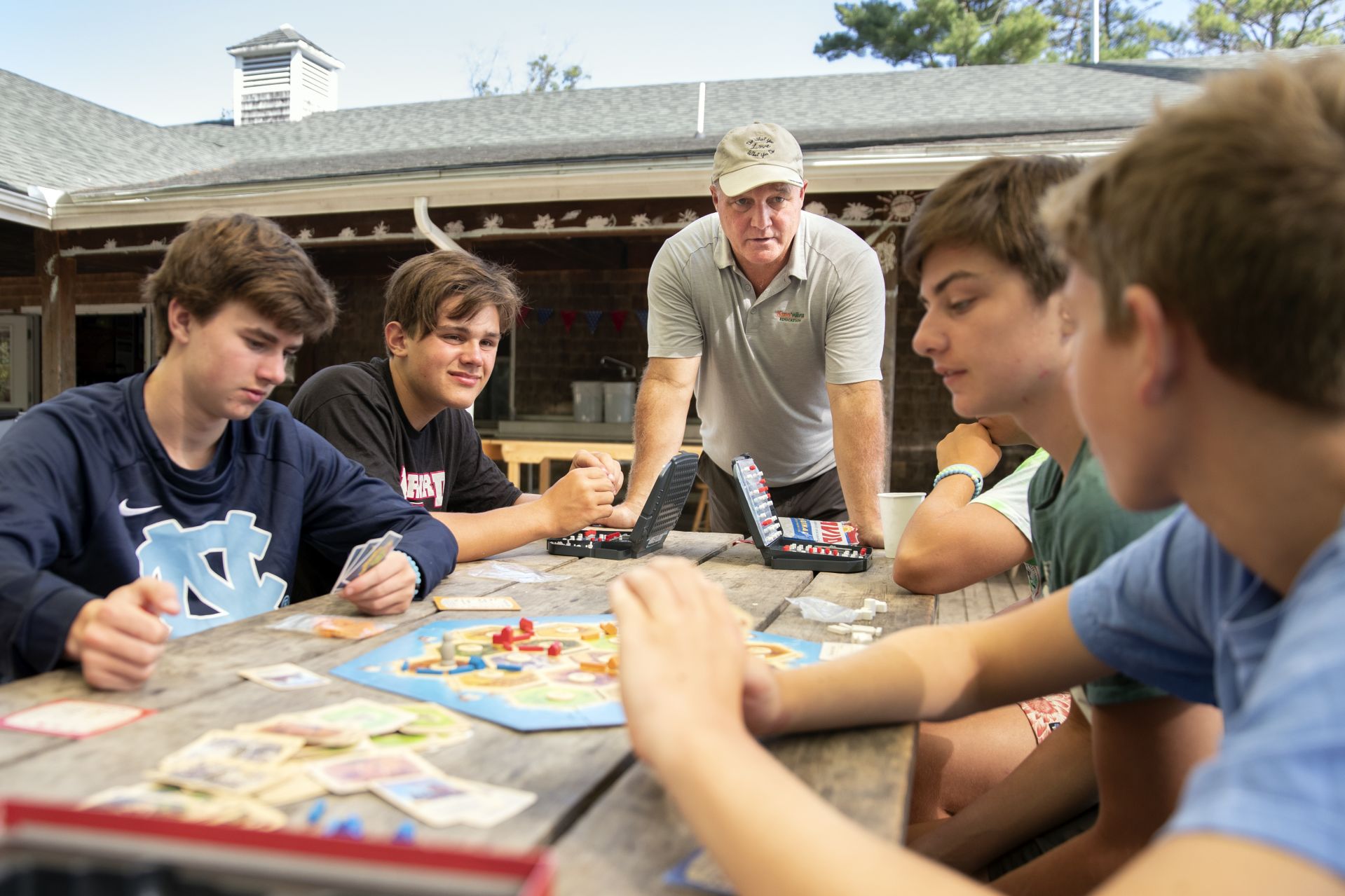 Charlie Richardson ’84 checks in with campers who are decompressing with board games after returning from a wilderness trip. (Phyllis Graber Jensen/Bates College)

Richardson’s first taste of Kieve was in his junior year at Bates, during a Short Term course on experiential education. The place was captivating, and he returned summer after summer in many capacities before making it his year-round home.

Things have certainly changed in the ensuing decades — formerly an all-boys summer camp, the organization has incorporated the Wavus Camp for girls and developed a year-round leadership school for Maine boys and girls, in addition to its many adult retreats.

But what’s most remarkable, Richardson says, is how summers at camp have stayed the same. 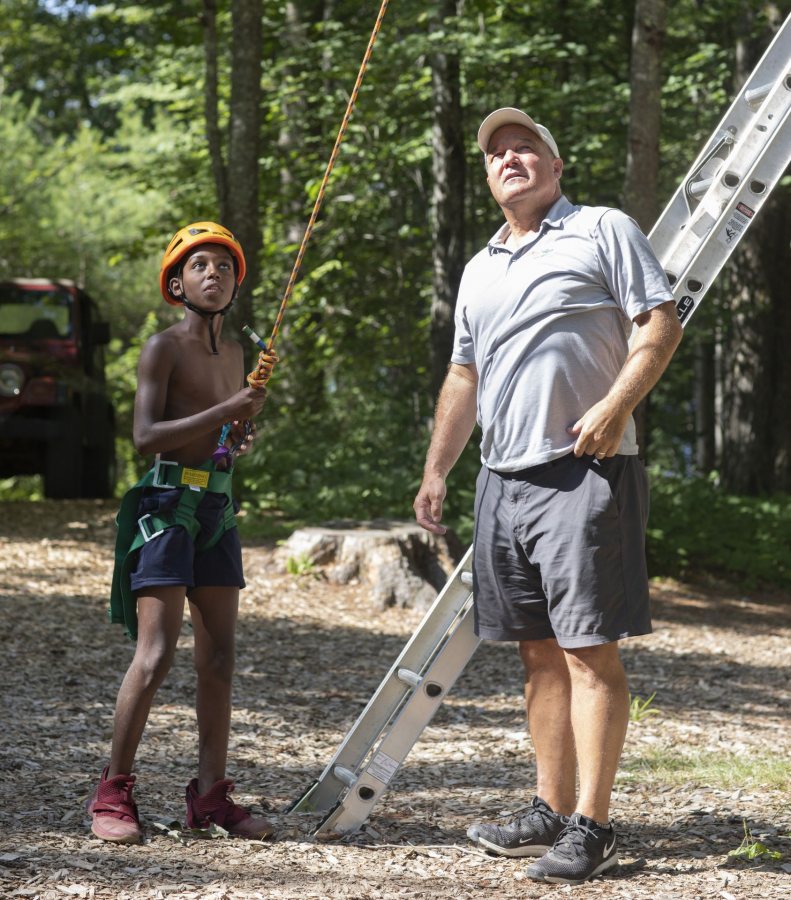 When has summer begun, and when is it over?

There are so many starts of spring and summer. The ice goes out in April, then you hear the first loon, then you hear the peepers. There’s the first time you can go in the lake and not freeze. You can see the traffic get heavier on the weekends. The lupine come out, and the tiger lilies come out.

I personally think September is the most beautiful time here. The crowds leave, and we can go to Popham Beach. Here in midcoast Maine, there’s an event on Columbus Day weekend called Pumpkinfest. To me, that’s the end of summer. 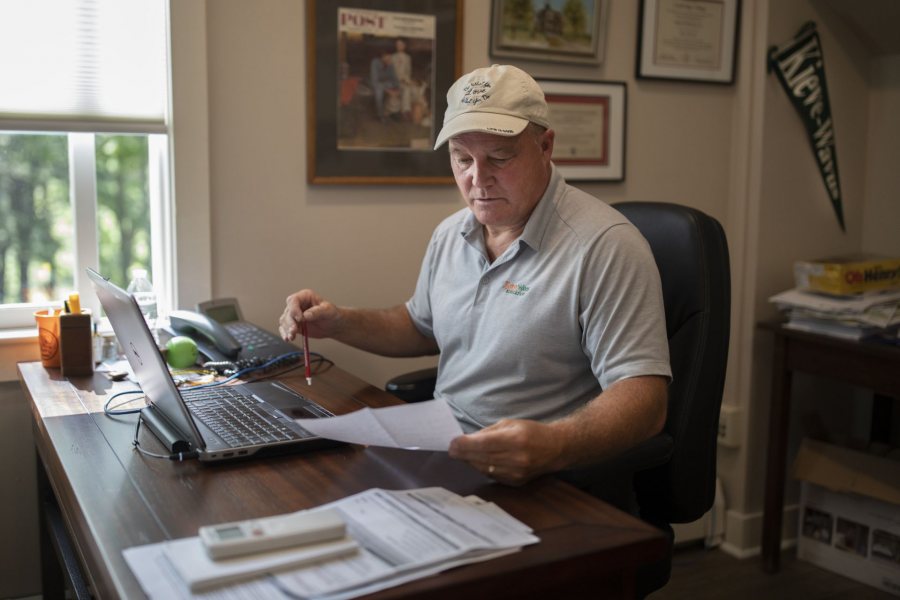 Charlie Richardson ’84 checks his messages before heading back out. (Phyllis Graber Jensen/Bates College)

What does your day-to-day work look like in the summers? Are you more in an office or out with the kids?

We always use a number here: 168. That’s how many hours there are in a week. We try to do the office work when the kids are not out and about, so that when the kids are out, roughly from 7:30 in the morning to 8 at night, we’re out there with them, playing with them.

I might be out in my rowboat checking on kids who are sailing. I might be down at the ropes course helping a kid climb. I might be driving a group of kids down to the ocean to a lobster boat. I might be taking kids out to the White Mountains and hiking with them, or going down water slides. It’s always unique, it’s always new, it’s always different, and it’s always fun. 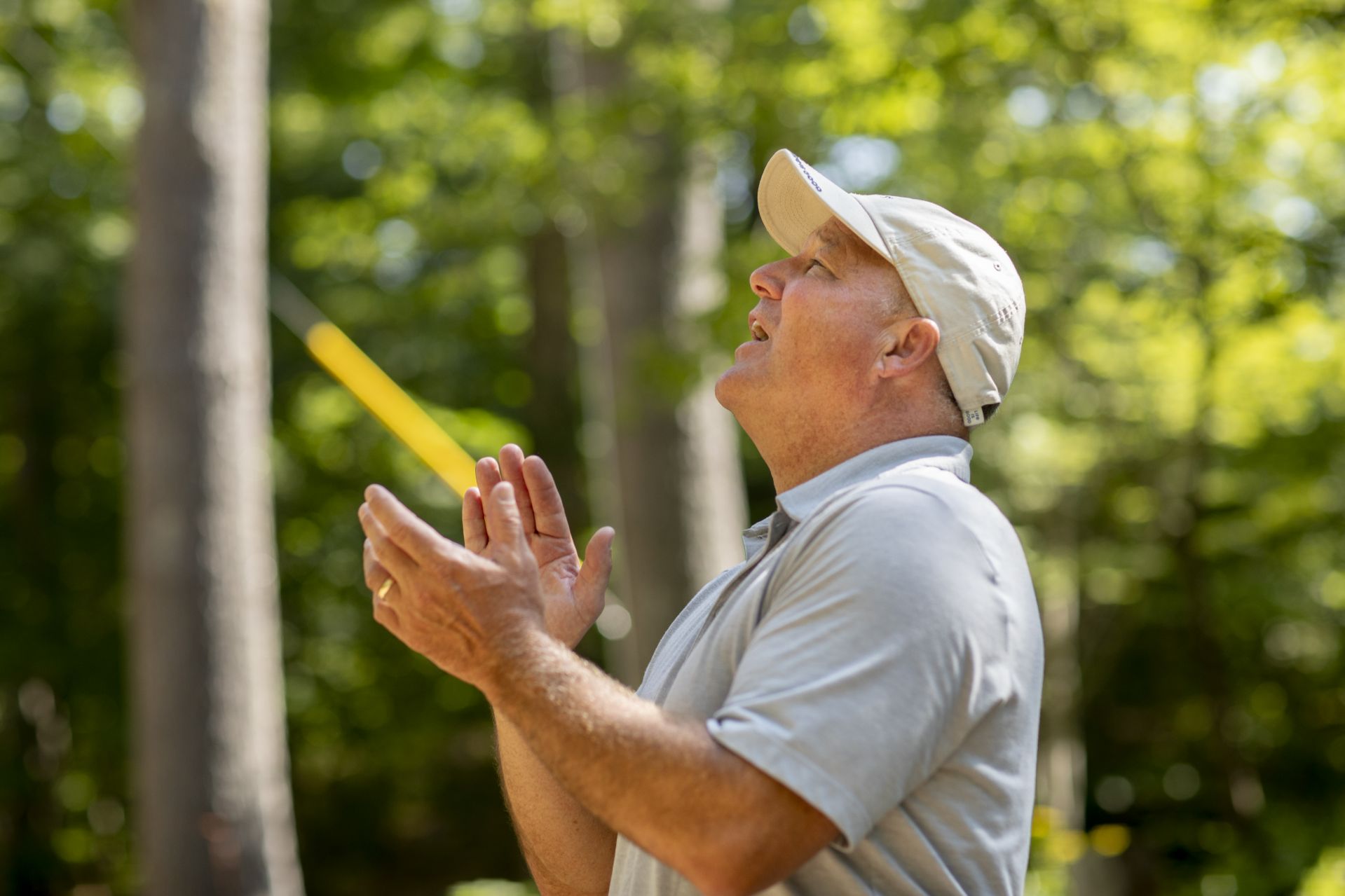 How has the camp changed over the years?

The best thing to say is that it hasn’t changed. Today, you hear about things like maker spaces and helping kids learn about 21st-century skills like grit and resilience and collaboration. Camps, in general, do that by their nature. The kids are outside playing and experimenting and learning all the time.

The camp does a good job of teaching both independence and dependence, in terms of realizing that you have to be part of a team. Our wilderness trips lend themselves to that. Every child goes on an overnight trip — even at 8 years old, they’re gone for three days hiking in the Sugarloaf Mountain region. Our 16-year-olds do 200-plus miles of the Appalachian Trail. It’s bonding and building of character.

The kids are always the same age, and the counselors are the same age. The only one who’s getting older is me. I’ve been here long enough now that I have kids of kids, second-generation children whose moms and dads I watched grow up. Now to see their children coming back to camp is really rewarding. 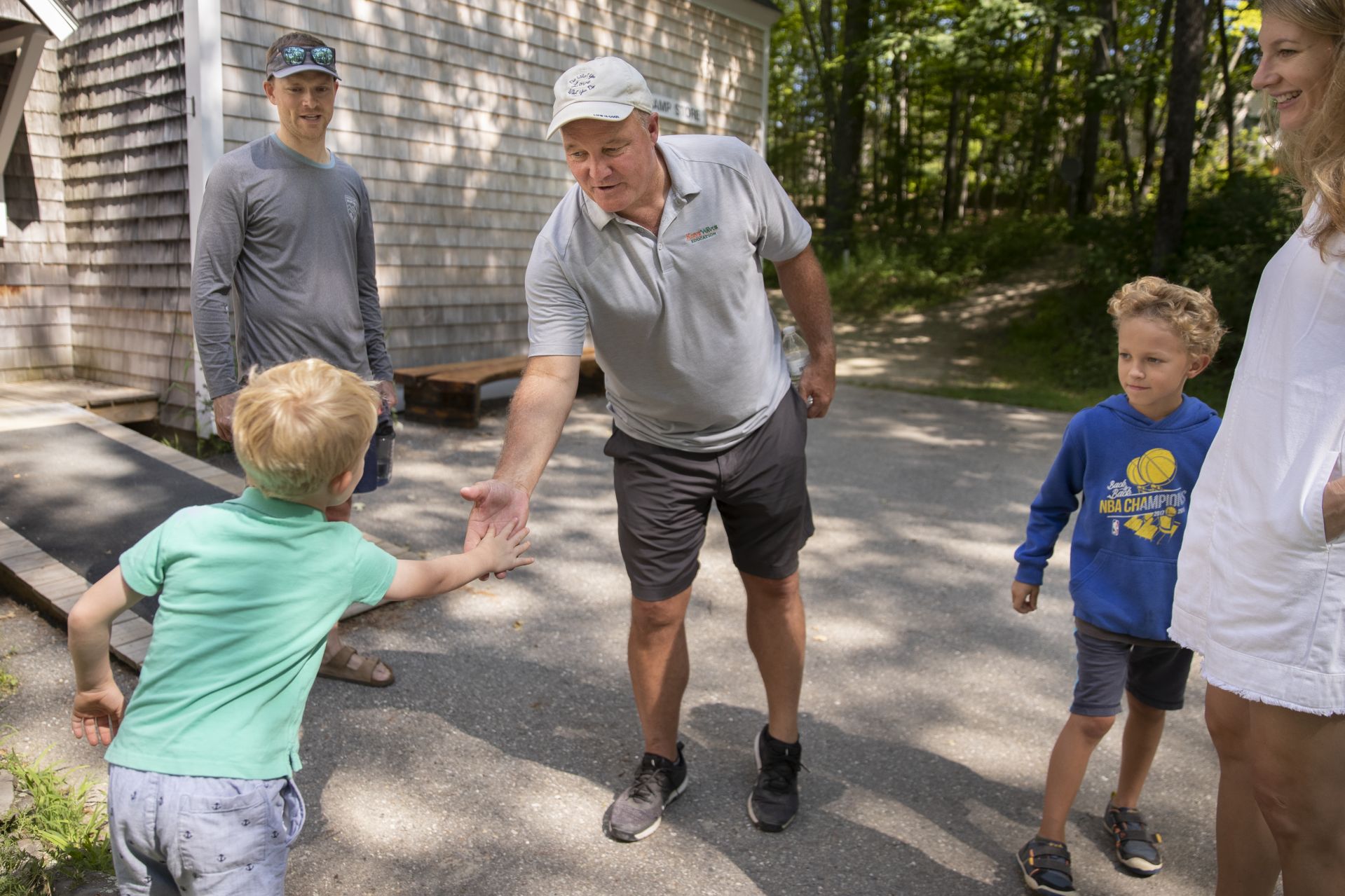 Richardson greets the Webb family from San Francisco. The father, Robb, was a summer camper and counselor at Kieve, and his sons will attend camp next summer. (Phyllis Graber Jensen/Bates College)

What have you learned during your time at the camp?

Being a residential facility, we’re able to see the kids beyond a normal academic day. Every kid wants to learn, but the key to helping them learn is to wait for teachable moments. What we’ve been able to develop here is having people at the ready to teach and help and model good behavior for kids, but let the kids pick the times.

It could be 9:30 at night around the campfire. It could be 5 in the morning, when we’re taking down the tents. It could happen on a Saturday. That part has been gratifying, to train staff to be good role models for the future. 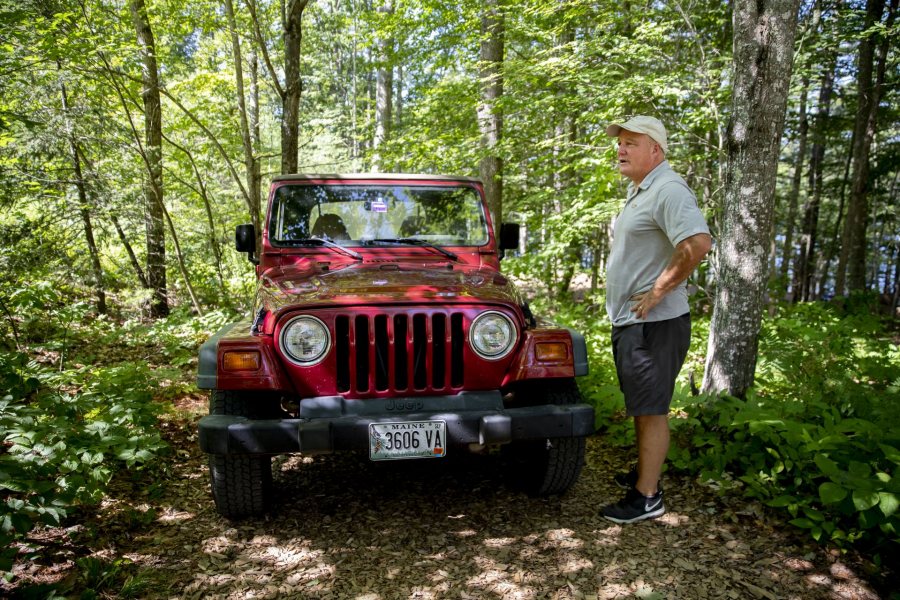 Charlie Richardson ’84 stands by his red Jeep adjacent to the ropes course. He uses the vehicle to move around the camp. (Phyllis Graber Jensen/Bates College)

Are you seeing major changes in Maine summers?

More and more people know about the state of Maine and how beautiful it is during the summertime. We have had to adjust some of our trips in terms of the footprint — we’re a big operation, the girls and boys’ camp. We have 1,200 kids that come through in the summertime. Whether we’re on the Allagash Wilderness Waterway or campsites throughout the state of Maine, it’s gotten more and more crowded. 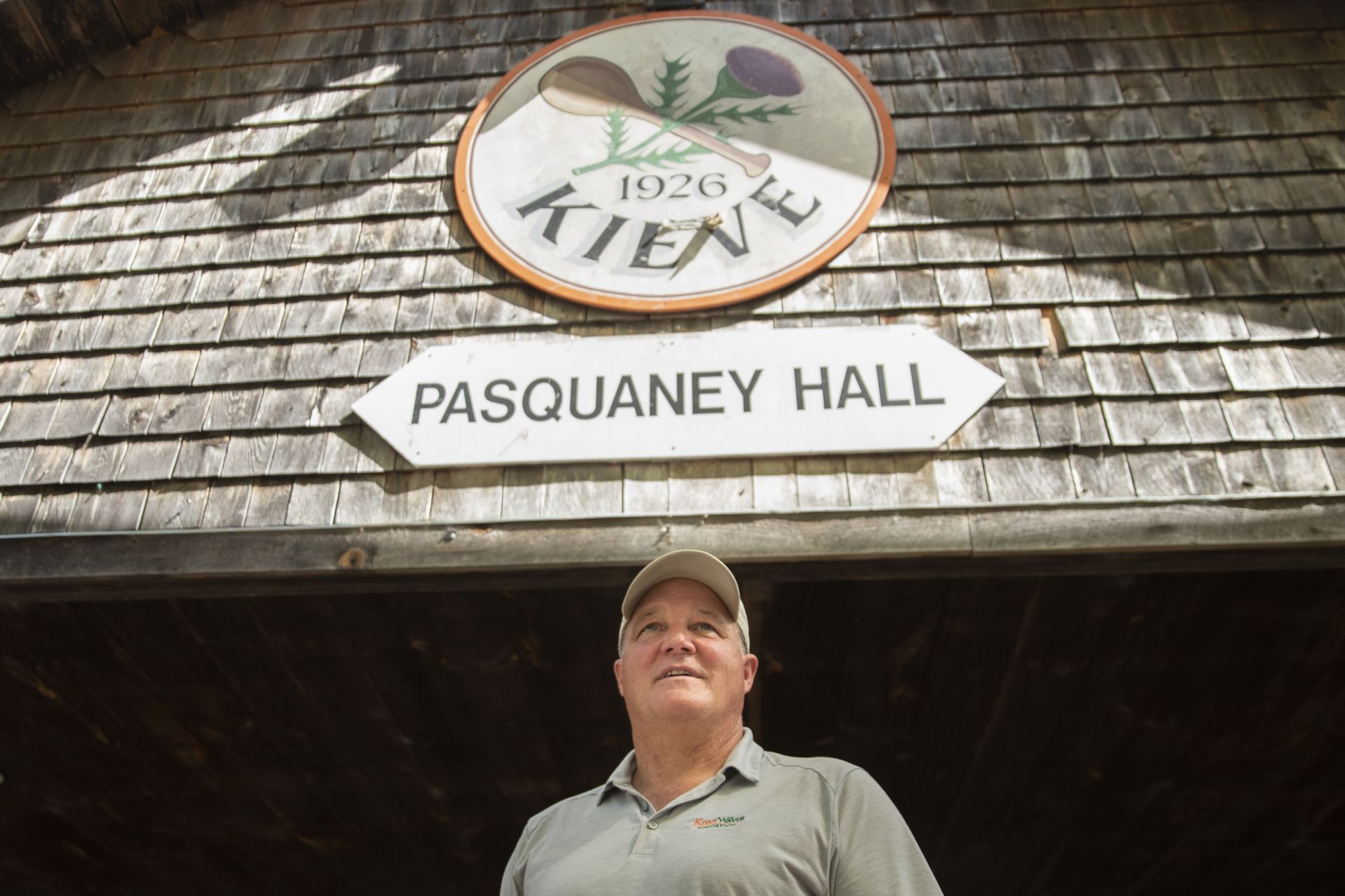 Charlie Richardson ’84 poses in front of Pasquaney Hall, which is the camp’s dining facility and is said to be its oldest building. (Phyllis Graber Jensen/Bates College)

What makes Maine summers so special?

The beauty of Maine is that in a short period of time you can go to so many different places. We’re on the lake, and in 20 minutes we can get down to the ocean. In 40 minutes we can get to a hike in the Camden Hills. Maine lends itself to a lot of outdoor, healthy activity. There’s so much more to do in the state of Maine.