At 8:30 p.m. on a recent Thursday in the Benjamin Mays Center, there’s a calm before the concert. Only a few tables are occupied. People trickle in, grab some chai and cookies, and talk with friends.

By 8:55, the center is packed. Students crowd around the tables, cluster on the steps near the back, and sit on the window sills lining the curved walls of the building. Tabletops are crowded with mugs and stickered water bottles, and even a textbook or two.

They’ve come for a special edition of the Village Club Series, a weekly performance of music, poetry, or comedy sponsored by the Campus Life Office. 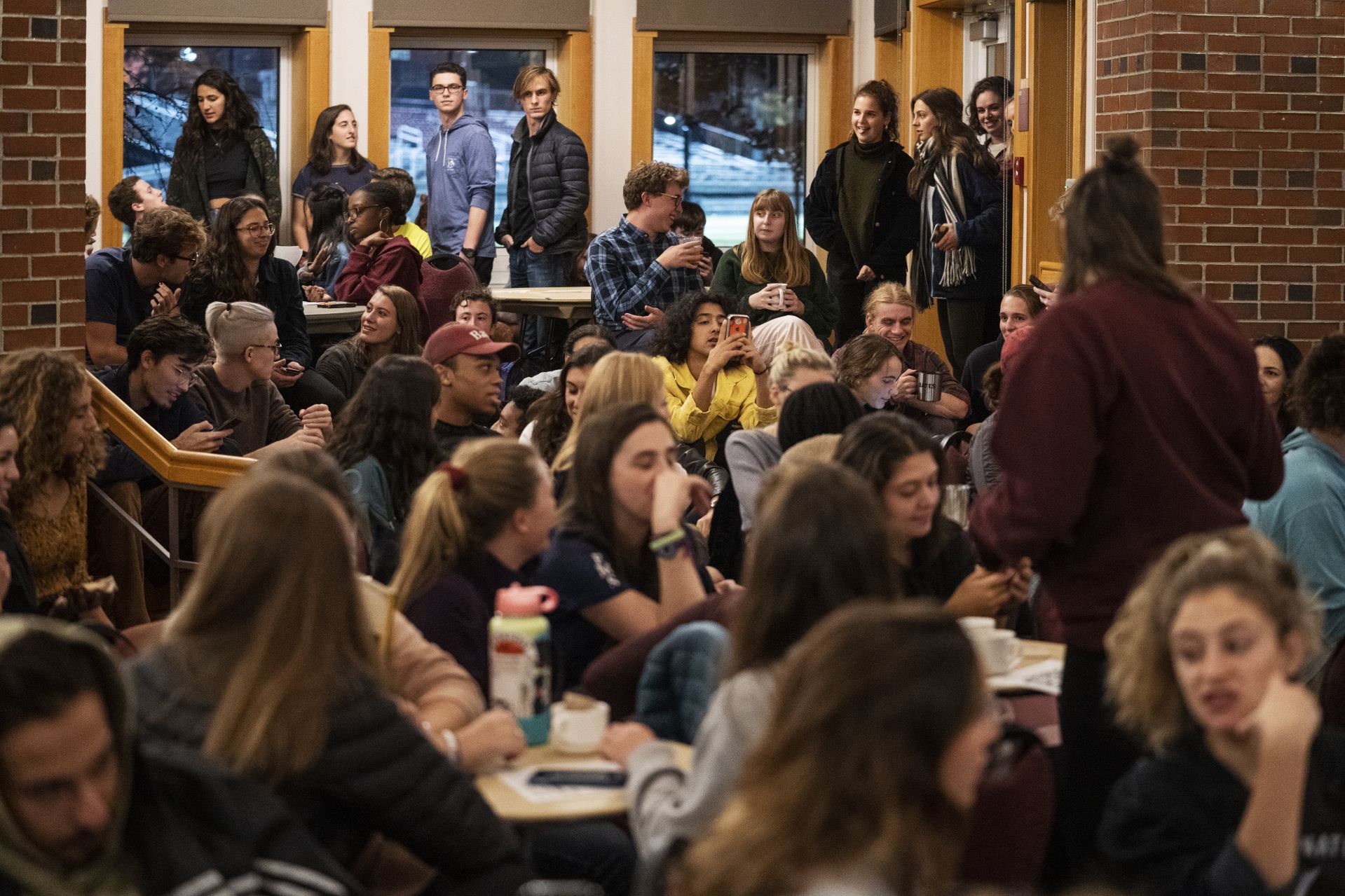 A staple of campus entertainment since 1993 (before any of today’s students were born), the VCS usually features outside performers. This week, however, is the once-a-semester Student Showcase edition — an all-student lineup that draws performers’ friends from the library and labs and into the Ben Mays Center’s welcoming interior.

“These are one of my favorite shows,” says audience member Ella Westerfield ’20 of Denver. She sits with friends who’ve come to see their fellow members of TakeNote, a campus a cappella group, perform in a band. 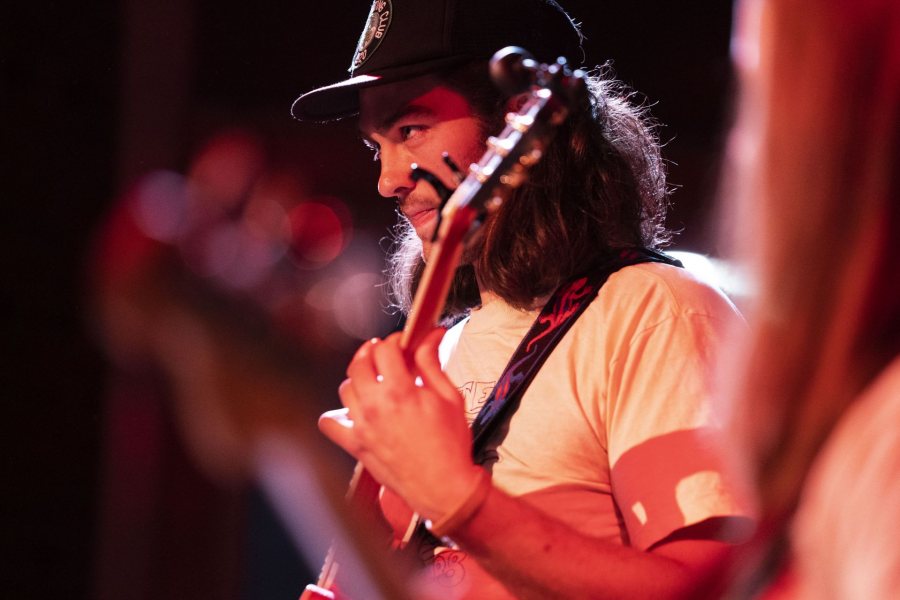 How does the showcase compare to an ordinary Thursday night performance? “It’s nice to see the talent on campus. I see a whole lot of people who I didn’t know played an instrument or read poetry,” Keirston says.

It’s not just students who gather to see their friends perform. At a table near the stage are economics professors Lynne Lewis, Julieta Yung, and Luke Chicoine. They’re here to see for the first time one of their students, Maddie Sirois ’21, play in her band.

“We’re here to see the rock-star side of her,” says Lewis.

While most people show up 10 or so minutes before showtime, several students have been working since around 5:30 to set everything up and make sure all the performances run smoothly.

VCS crew member Cyan Hunte ’22 of Brooklyn, N.Y., helps out before each show, setting up equipment, preparing the space near the stage that serves as a green room, and making the bands comfortable before their performances. “The Student Showcase is a little more work for us,” Hunt says. 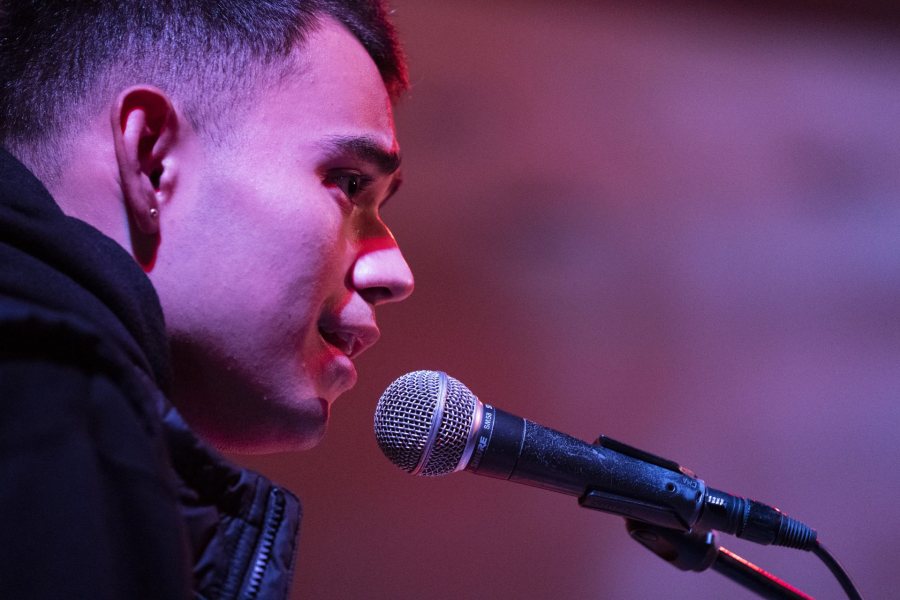 Anthony Anzora ’20 of Oakland, Calif., leans into the mic during a set that included “Fools” by Troy Sivan and “Lovely” by Billie Eilish. (Theophil Syslo/Bates College)

Erick Ramos ’22 of San Diego, one of two VCS student managers along with Lillian Chang ’20 of Wilton, Conn., agrees. “It’s basically a continuous sound check,” he says. Setting up equipment and getting a good balance of sound for a show, especially with multiple acts, can stretch on for hours and keep the VCS crew working until mere minutes before showtime.

The night’s lineup, a mix of first-time performers and returning acts, opens with Exit 80, which takes its name from the turnpike exit that the band members take to get to Bates. A freshly formed cover group, it features singer Esme Goldfinger ’21 of Portland, Maine, drummer Daniel Tepler ’21 of Bridgeport, Conn., guitarist Alex Platt ’20 of Groton, Mass., and the econ professors’ favorite, bassist Sirois of Maplewood, N.J.

At first, says Sirois, “we were really nervous. But then we kinda got into our rhythm.” She’s wanted to perform since her first year at Bates, and the showcase is her campus debut. Her bandmates, after talking over the summer, decided to get together this semester and have a go at being a cover band. 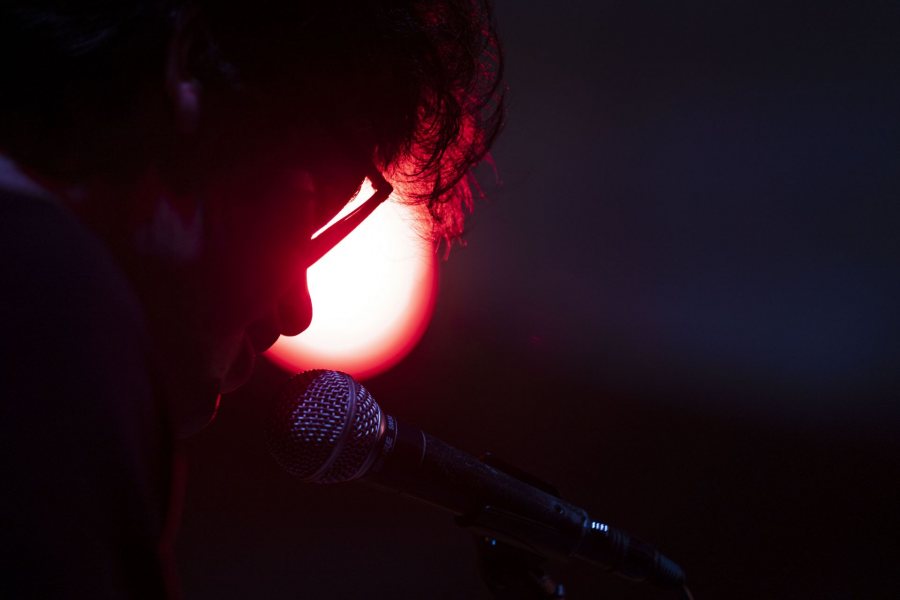 The second act is Robyn Moss ’20 of White Plains, N.Y., who sings and plays guitar to cheers from the crowd. Moss, who is on the board of college radio station WRBC, is no stranger to the VCS student showcase, having performed multiple times.

A new face emerges as the third act. Brady Chilson ’23 of Carlisle, Mass., sings and plays the keyboard for his first Bates performance. His renditions of “Your Song” by Elton John and “New York State of Mind” by Billy Joel draw applause, making his debut an undeniable success.

In a break from music, Justice Geddes ’20, does a standup routine centering on his queer identity and growing up in Bozeman, Mont. A VCS veteran, Geddes almost instantly draws laughs.

Anthony Anzora ’20 of Oakland, Calif., follows Geddes with another round of covers, singing “Fools” by Troy Sivan and “Lovely” by Billie Eilish. 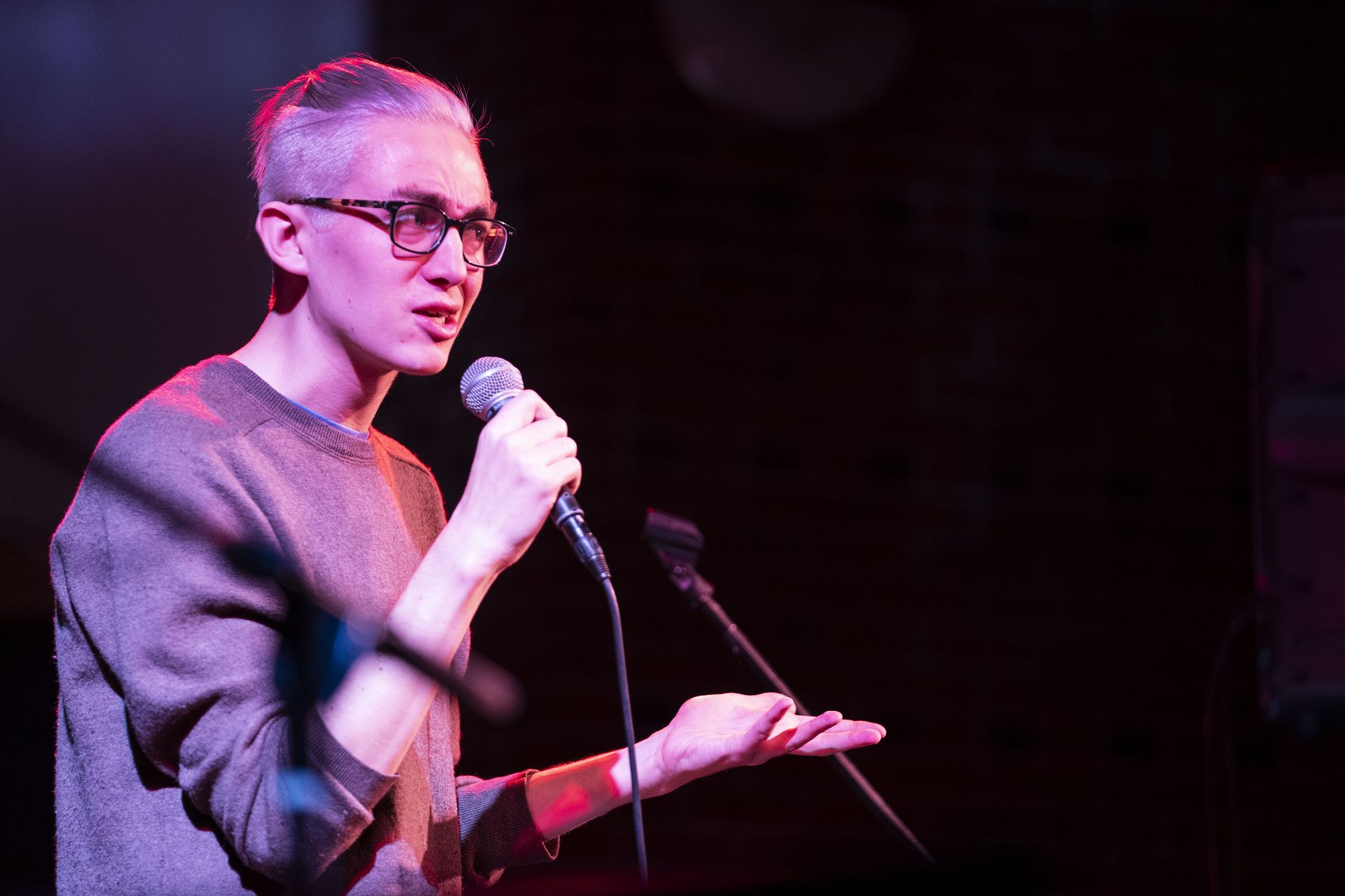 The night’s sixth and final act is the all-senior band Shoes on the Rug.

Named for one member’s former roommate who insisted on a “no shoes on the rug” rule in their dorm room, the band features Becca Kraft of Newton Center, Mass., on vocals and guitar; Ben Skiest of Longmeadow, Mass., on keyboard; David Maffly-Kip of St. Louis on guitar; Will Weeks ‘20 of Portland, Maine on vocals and bass guitar; Drew Collins ‘20 of Piedmont, Calif. on guitar, Julien Cook ‘20 of Beersel, Belgium on drums, and Tanner Stallbaumer ‘20 of New York City on bass guitar.

The Shoes step out to cheers and shouts of “Where’s the rug?” and “Take your socks off!”

The band is well-seasoned, having played their first set their sophomore year, and the confidence shows. “We’re gonna start off with a song we put together two hours ago,” says Kraft.

After several songs, the band closes the night with an upbeat “Valerie” by Amy Winehouse. 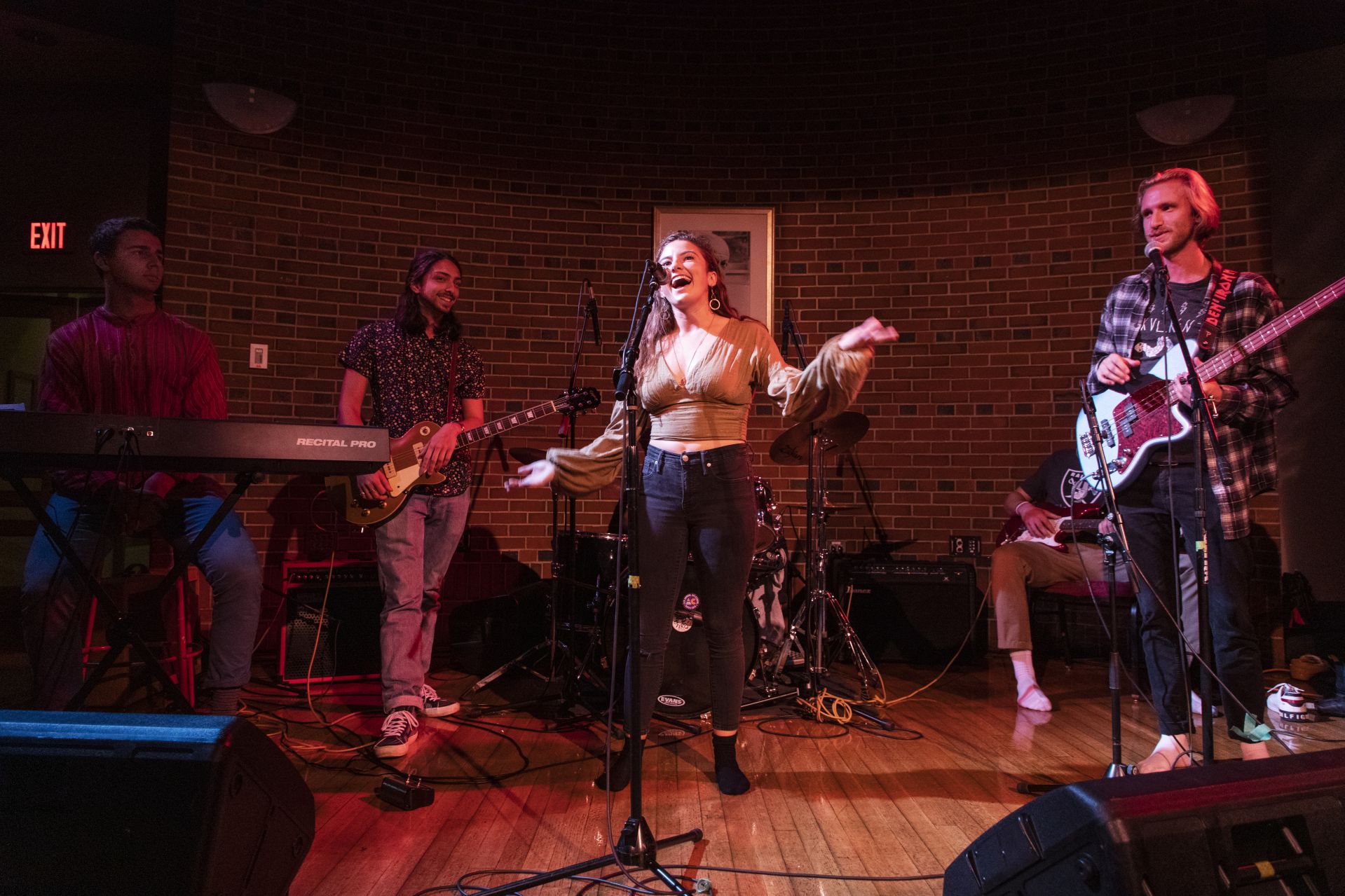 Surrounded by Shoes on the Rug bandmates, Becca Kraft of Newton Center, Mass., responds to the audience toward the end of the Village Club Series showcase. (Theophil Syslo/Bates College)

The performing done, the showcase ends as it began — quietly, with friends congregating around the room, congratulating their performing peers, and lining up for final cups of chai.