Steve Collins of the Lewiston Sun Journal spoke with Professor of Psychology Krista Aronson, the creator of the Diverse BookFinder.

Now in its third year, DBF’s online database and physical picture-book collection makes diverse children’s books more accessible, Aronson told Collins. Since its launch, the physical collection has grown, and the DBF has helped dozens of libraries analyze diversity in their own collections. 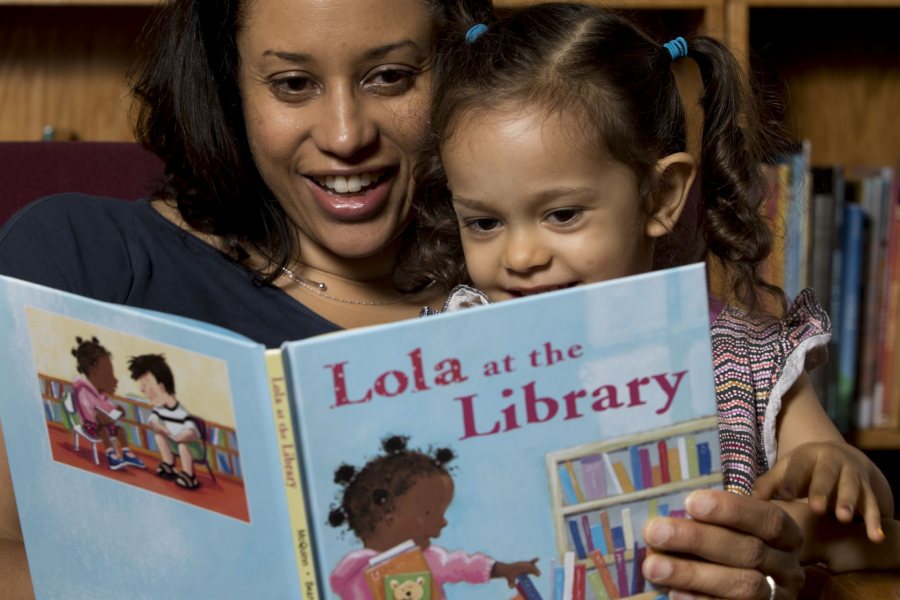 Aronson also spoke with Meghan Mangrum of the Chattanooga Times Free Press, who wrote about teachers in the Tennessee city who are trying to diversify their own book collections.

“We live right now in segregated societies, and we think of school or work as places where we come in contact with people who are different from ourselves,” Aronson said. “That’s going to be increasingly common, and we need to prepare our children to be successful in those environments.” 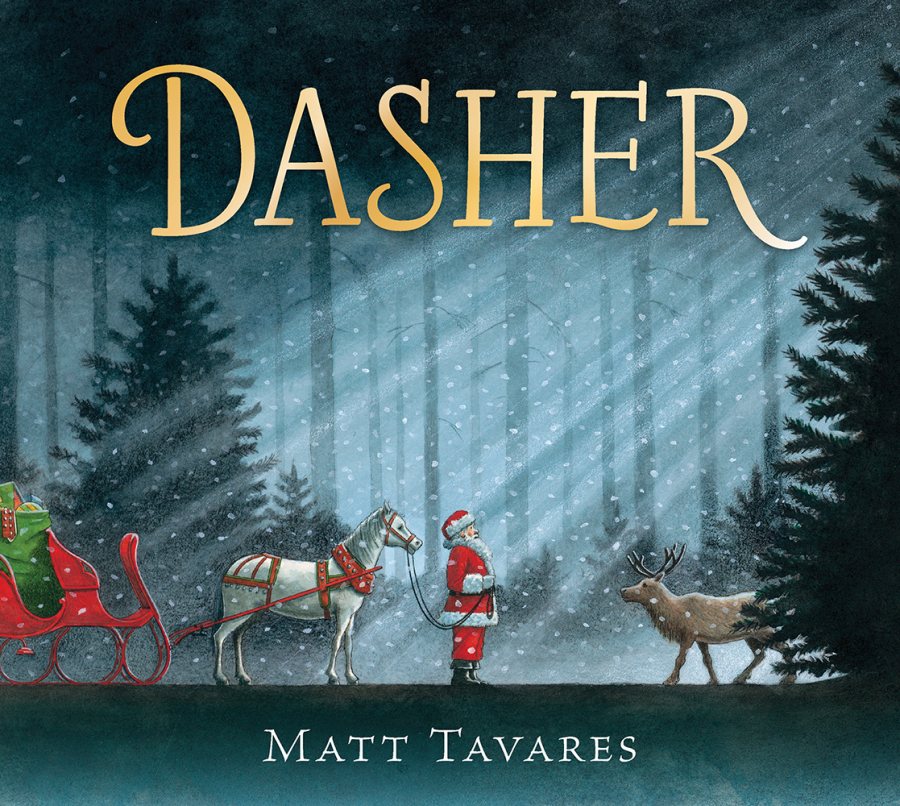 Tavares wrote and illustrated his first picture book for his senior thesis at Bates, under Robert Feintuch. Dasher, his 20th book and the first to make the bestseller list, is a kind of origin story for Santa’s reindeer.

Tavares lives with his family in Ogunquit, Maine, where, as he told Routhier, the beautiful Maine winters are inspiring.

“I do a lot of my writing during the winter,” he said. “I find winter in Maine is a good time to clear your mind and really focus on your story.”

Why are poor Americans more patriotic than their wealthier counterparts? — The Guardian 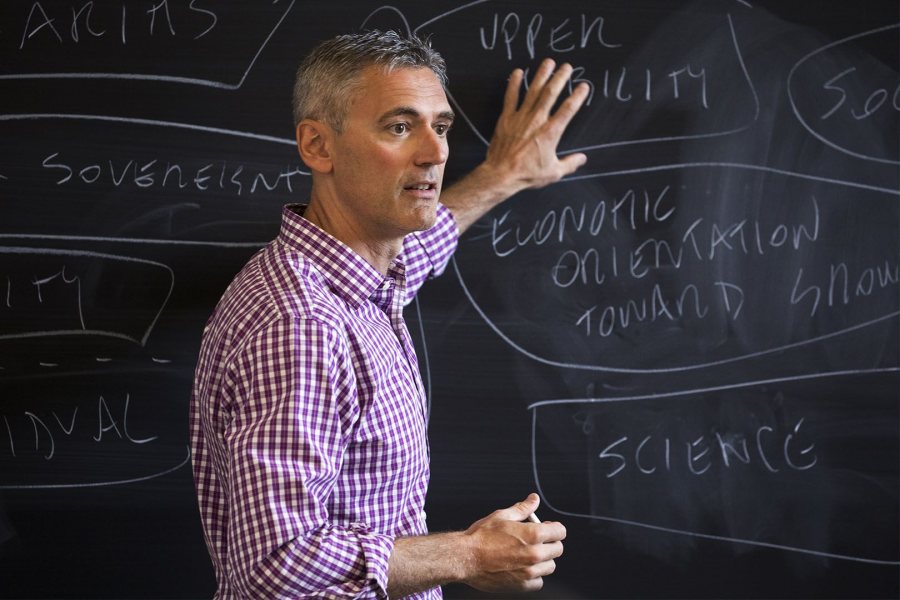 Most of the financially disadvantaged people that Francesco Duina interviewed for Broke and Patriotic, he says, “take ownership of their life histories.” They don’t blame the system. (Theophil Syslo/Bates College)

Duina is the author of the book Broke and Patriotic: Why Poor Americans Love Their Country. By interviewing residents of Montana and Alabama, Duina learned that some of those with the lowest incomes saw the United States as a place of dignity, abundance, and freedom.

“As long as they remain deeply patriotic, America’s poor won’t rise up,” Duina wrote. “Indeed, they’ll continue to fill the ranks of the military, strive and sacrifice to help America assert itself in the world, and even feed into and support the slogans and successes of the country’s political leaders.”

Rich Kramer of Wisconsin Public Radio interviewed Katherine Frank ’94, who will be the next chancellor of the University of Wisconsin–Stout, the state’s polytechnic university. She will take the post in March. 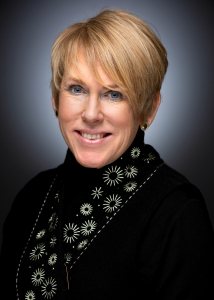 Katherine Frank ’94 is the new chancellor of the University of Wisconsin–Stout. (UW-Stout Communications)

Frank studied English at Bates and holds a doctorate in English from the University of Washington. She has held a range of administrative positions, most recently as vice president of academic innovation and professor of English at Central Washington University.

Frank told BatesNews that Professor of English Steven Dillon and Professor Emerita of English Carole Anne Taylor, who died in 2015, were instrumental during her time at Bates. “They are/were remarkable scholars, teachers, and mentors, and I feel very lucky to have worked with them and many others in the English department at Bates.”

Bass is the author of One Goal: A Coach, a Team, and the Game That Brought a Divided Town Together, which chronicles how the soccer team, largely made up of African immigrants and reflecting the changing demographics of Lewiston, won its first state championship in decades in 2015. 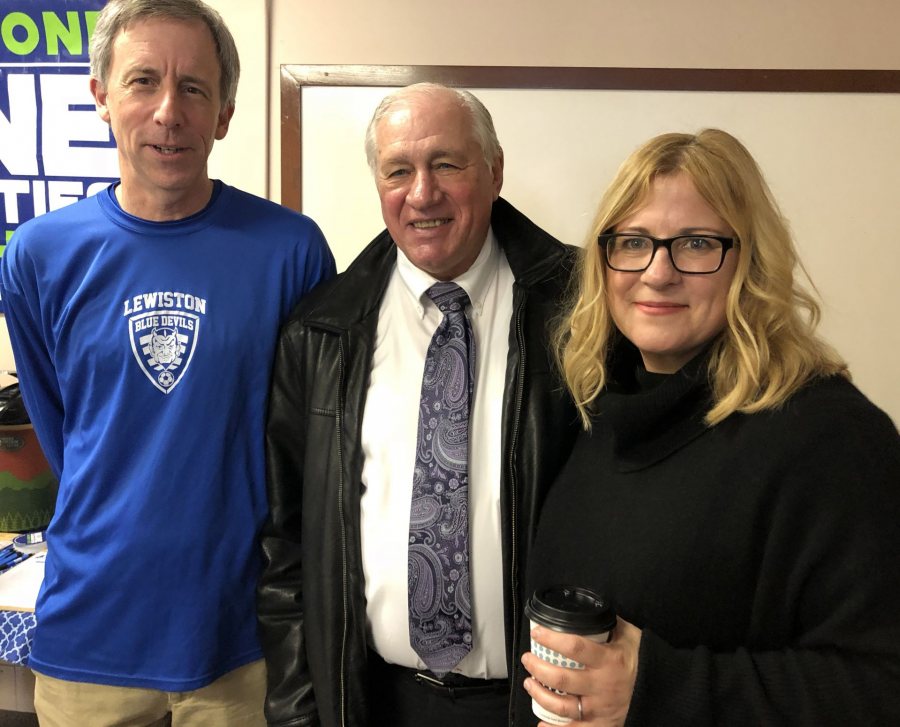 Amy Bass ’92 (right) poses with Mike McGraw (center) and Kim Wettlaufer ’80 during a reception at the Maine Immigrant and Refugee Services offices in Lewiston during her visit to the city and Bates to promote her book One Goal in March 2018. (H. Jay Burns/Bates College)

Bass got to know McGraw, the rest of the coaching staff, and current and former players deeply. Quoting many of those players, she wrote that Lewiston was better for McGraw’s leadership.

“Whether on the soccer pitch, in a classroom, or at a local watering hole, that is who Mike McGraw is — someone who can talk to anyone from the moment he looks at them with his twinkling blue eyes,” Bass wrote.

One year on Capitol Hill, Republican Rep. Ben Cline has been effective even while in the minority — The Roanoke Times

U.S. Rep. Ben Cline ’94 was recently the subject of a lengthy profile in The Roanoke Times. A first-term Republican representing Virginia’s 6th District, he’s aligned himself with the GOP and President Trump, while simultaneously reaching across the aisle, wrote reporter Amy Friedenberger. 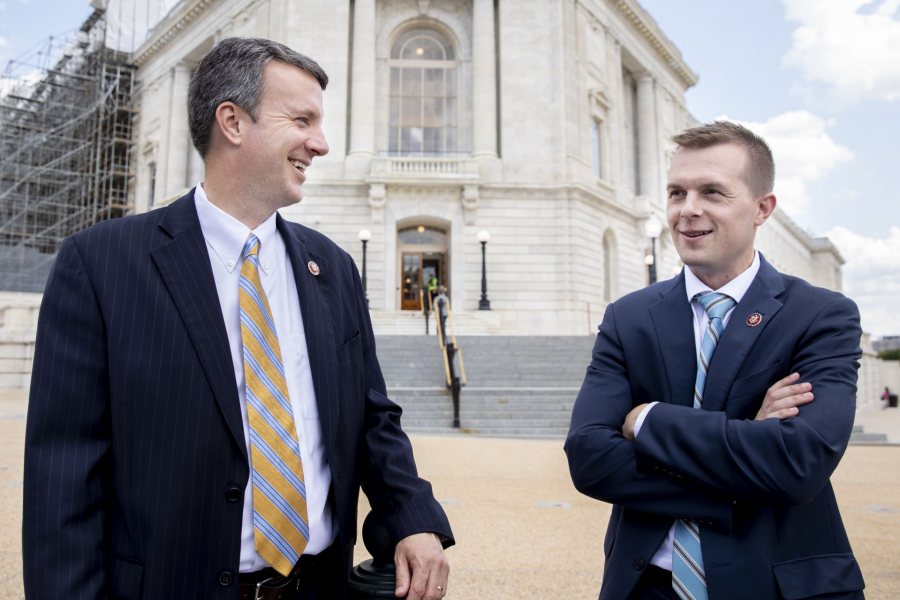 Cline succeeded longtime Rep. Bob Goodlatte ’74, who retired in 2019. Now a member of the Judiciary Committee, Cline is part of important decision-making around issues like gun control and immigration — all overshadowed, of course, by the fall’s impeachment hearings.

On Dec. 13, Cline voted “no” on articles of impeachment against President Donald Trump, though the Judiciary Committee as a whole voted to send the articles to the full House for a vote.

Still, in one of the most partisan environments imaginable, Cline tries to work with Democrats. “You need to understand where the other person is coming from in their position and recognize that they come at it from a position of morality as well,” Cline told Friedenberger.

When deadly X-rays were used for hair removal — OZY

At the turn of the 20th century, using X-ray treatments to remove body hair came into vogue, wrote Virat Markandeya of the digital magazine OZY. Doctors and scientists didn’t know how dangerous high doses of X-rays were, and deadly cancers later afflicted many women who had undergone the treatments. 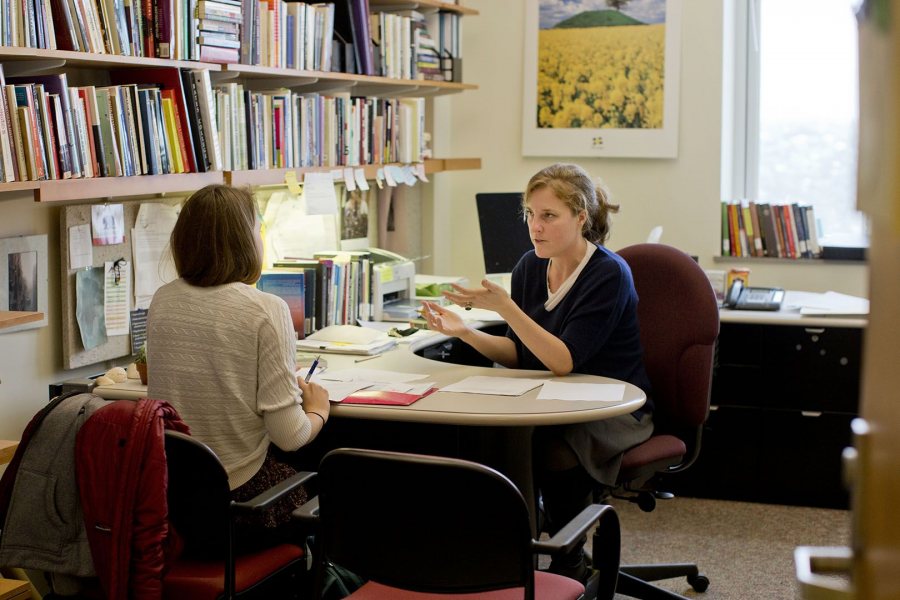 To explain the appeal of X-ray hair removal, Markandeya turned to Rebecca Herzig, a professor of gender and sexuality studies at Bates and an expert on the politics of body hair.

Some women turned to X-rays because they “bypassed the inescapable physicality of all other hair-removal technologies” like shaving and waxing, Herzig wrote in a 1999 article in the journal Technology and Culture.

In the space of a week, the Portland Press Herald covered both of the Bates Museum of Art’s current exhibitions, placing them at the forefront of a strong showing of art at Maine colleges. 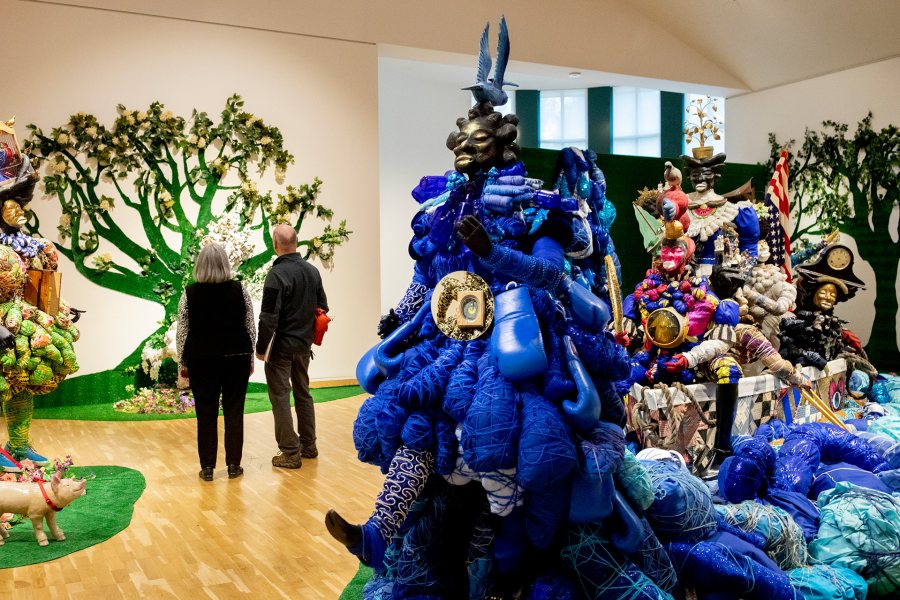 Bob Keyes reviewed Vanessa German’s Miracles and Glory Abound, which explores the stories societies tell themselves and who gets left out of those stories. One piece reimagines Emanuel Leutze’s famous 1851 painting, “Washington Crossing the Delaware.”

“German aims to add depth to those stories by fleshing them out and starting a conversation about public memory,” Keyes wrote.

Elsewhere in the museum, Daniel Kany took a look at Stages for Being, an exhibition of photography by Ralph Eugene Meatyard, who took surreal photos featuring his family, and props like masks and dolls, in abandoned places.

Additionally, the museum collaborated with the Maine Museum of Photographic Arts on another photography exhibition, Jack Montgomery & Ralph Gibson: Appearances, at the University of Southern Maine. 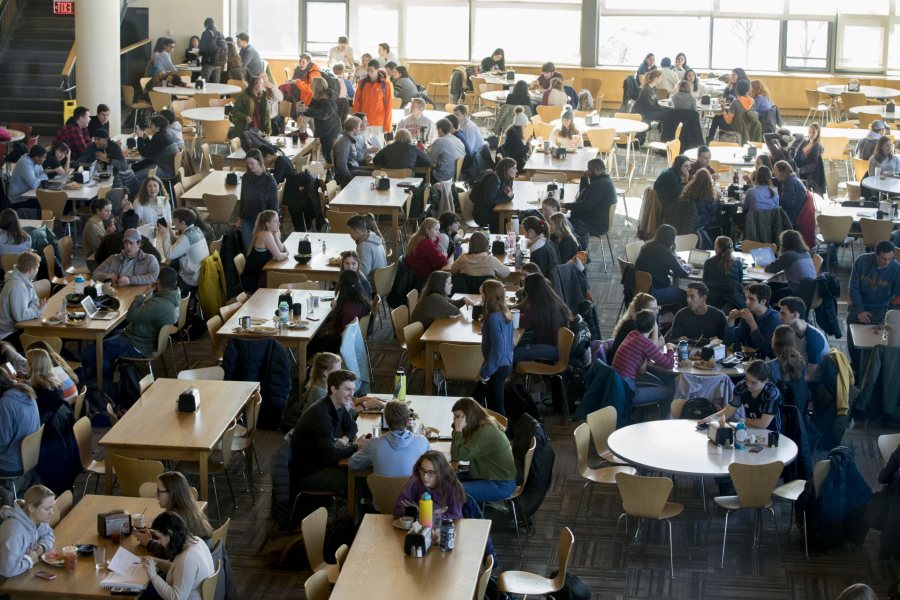 Tice marveled at the cereal wall, the thinly cut French fries, and especially at the beef panang curry on offer, which, she said, made her a “curry fan” for the first time.

The blog ClassicMovieChat.com, which shares photos and stories from the Golden Age of Hollywood, posted about Jeffrey Lynn ’30, an actor who made a name for himself in film during the 1940s. 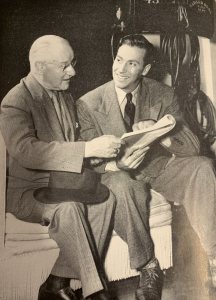 Jeffrey Lynn ’30 (right) sits with Grosvenor Robinson, professor of elocution at Bates, in 1941.

Lynn’s notable roles include My Love Came Back, opposite Olivia De Havilland, and A Letter to Three Wives, with Kirk Douglas and Jeanne Crain. He also famously screen-tested for the role of Ashley Wilkes in Gone with the Wind. (The part ultimately went to British actor Leslie Howard.)

“The blandly handsome actor was most often cast as a young husband, a young recruit, or an interesting boyfriend,” wrote Joe Morella and Frank Segers.

Lynn also fought in World War II, for which he received a Bronze Star, and later worked as a film and theater producer.