It may be cold comfort in the midst of the COVID-19 pandemic, but within disasters there are ultimately lessons that benefit humanity.

At Bates, in fact, the name of an environmental studies course reflects this reality. Taught by Jane Costlow, Clark A. Griffith Professor of Environmental Studies, “Catastrophes and Hope” scrutinizes how disaster narratives can serve us.

Including, in a way, lessons about our expectations from narrative itself. Costlow led the course this winter as the catastrophe of COVID-19 tightened its grip — a catastrophe that, as Costlow and her students discussed one day, is all the more disturbing because we have little idea of how it will ultimately play out.

In other words, unlike hurricanes or earthquakes, COVID-19 thus far is defying our sense that many disasters, like novels or films, have a plot arc.

In that way, the pandemic reminded Costlow of the Chernobyl nuclear disaster, which was a topic of that class discussion. In the midst of the pandemic, she said, we’re “far away from having a sense of a beginning, a middle, and an end.”

Costlow is not the only member of the Bates faculty who is watching COVID-19 and wondering what it has to teach us in terms of what we believe, how we feel and respond, and how we get along. Meet a few more:

For Kelley-Romano, a rhetoric scholar known for her research into conspiracy theories, the noise around COVID-19 may be too much of a professional opportunity.

Conspiracy theorizing is as old as humanity, but “what’s most different about COVID-19 is the audience,” Kelley-Romano says. “We’re all stuck at home, all on lockdown, and that’s around the world. And we have this ‘infodemic,’ this glut of information about the virus.

“Of course, people want to know what causes it, what could potentially prevent or cure it, where did it start, why is it here?” — questions that are like an open cash register to the conspiracy spinners. “And what’s different is that we’re all just available to look on our phones for obscene amounts of time.”

Another difference is the universal reach of the virus. “When we have something that so broadly affects all members of our community in such dramatic ways, it really shakes people up and makes the grasping for information to anchor ourselves more desperate,” Kelley-Romano says.

Which primes people to believe things that, in normal times, they would reject as ridiculous. “And the degree to which people stay engaged on the internet with news seems to me to be inversely proportionate to their actual emotional health,” she adds. In short, she advises, limit your screen time and don’t share conspiracy theories, even just for laughs.

From a Chinese lab being the origin of the virus, to 5G cell phone technology being a vector for it, to cow urine as a cure for it, the pandemic has produced a bumper crop of conspiracy theorizing. Unless she’s working and deliberately thinking about politics and rhetoric, Kelley-Romano finds it helpful to filter her consumption of mainstream news. “I do that only when I cook meals and I’m semi-distracted. I just trust that what I get will be enough.”

“Like so many of the people around us, writers and artists are responding to the pandemic with creativity and with compassion,” Nayder says. “Literary representations will no doubt help us to understand the inequities and injustices underscored by the pandemic, as well as the connections that it has fostered and exposed.”

Looking ahead, she continues, “scholars who study ‘the literature of COVID-19’ will help us grasp the meanings of the disease in cultural, social, and artistic terms — meanings which are already emerging in the medical context of the disease and our efforts to contain it.”

Nayder’s own teaching models that scholarly imperative. Her two courses that examine relationships among literature, empathy, and medicine, she says, are “closely tied to our current crisis and our ways of responding to it — not only in terms of the panic and anxiety generated by the pandemic, but also in terms of the creativity, narrative and otherwise, that it is inspiring.

“In particular, the humanity — and the vulnerability — of medical practitioners who have stories to tell about their patients, themselves, and their families have really come to the forefront.

“These stories of loss, of suffering, of sacrifice, recovery, and love foreground the power and value of what we are calling ‘the medical humanities,’ and our understanding of our own corporeality more generally as well.”

Nayder follows The New York Times’ continuing portraits of people touched by COVID-19, “as well as the political dimensions of the pandemic,” she says.

“And, of course, I’m learning from the stories and experiences that my students are relaying as we’ve been meeting remotely” for her course “The Arctic Sublime,” which looks at 19th-century perceptions of the Arctic — a literature “with its own representations of fear, physical duress, and feelings of awe.”

As events unfold, Nayder continues, “my questions involve the ideas of ‘normalcy’ that the pandemic has raised: What is ‘normal’? When and how — and should — we return to it?”

“My research is on disaster,” Shepard says bluntly. Specifically, this New Orleans native examines the impact of settler colonialism — the systematic replacement of an existing population with settlers from away — on the rebuilding of her home town after Hurricane Katrina.

(Long after the 2005 storm and subsequent flooding, many longtime NOLA residents were stranded in cities where they’d taken refuge, clearing the way for a variety of new people — colonizers, really — to take their places.)

“I think about settler colonialism as a disaster,” Shepard explains. “And as a matter of fact, I consider it the disaster that creates more disaster.” 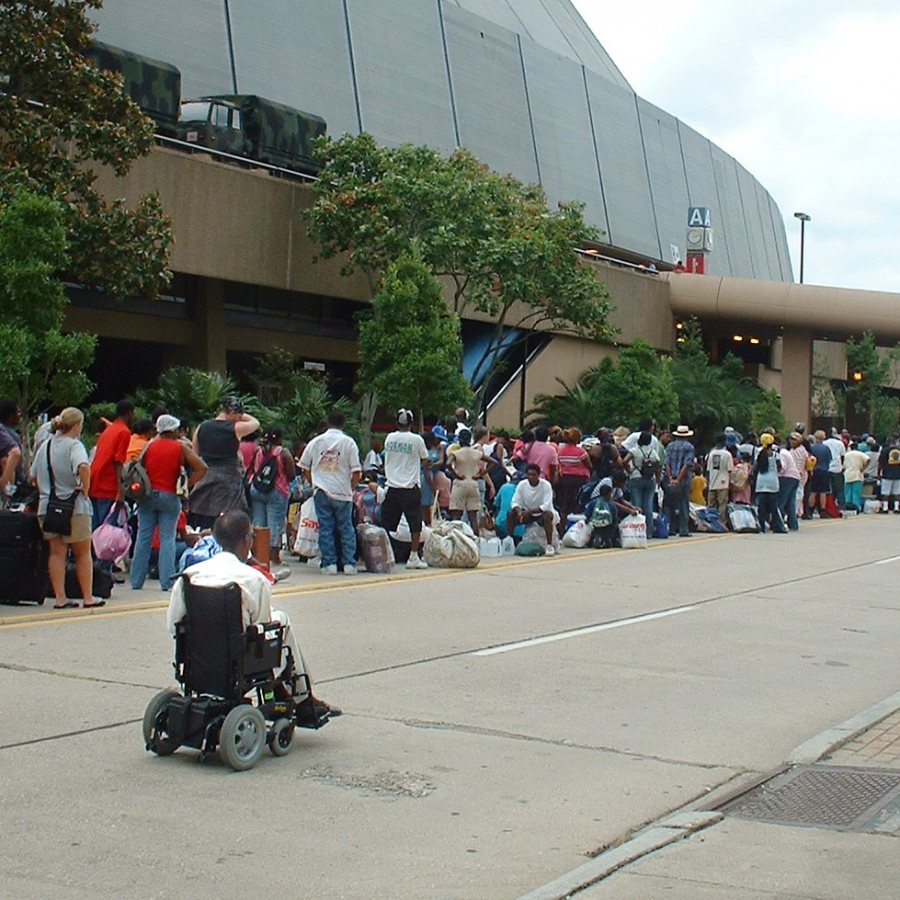 In August 2005, New Orleans residents, hauling what belongings they can, line up to enter the Superdome in advance of Hurricane Katrina. (Marty Bahamonde/FEMA)

In other words, the legacies of racial, economic, and civic injustice left by settler colonialism constitute a slow-motion, mundane kind of misery that gets noticed only when a more-newsy catastrophe comes to call. 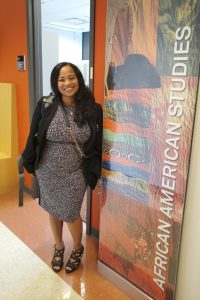 “The things that we think are disastrous are really just an additional cataclysm,” she says. “We’re already existing in a state of disaster — I would consider it perpetual disaster. Then we get a spike, an unusual cataclysm — that could be a hurricane, that could be coronavirus, it could be different things….These spikes really reveal what was already there.”

Shepard sees strong parallels between a phenomenon like COVID-19 and the dominance in recent decades of so-called neoliberalism, the privileging of private-sector over public interests in government activity.

“We see how hard it’s hitting communities of color,” as well as unemployed, precariously employed, and undocumented workers — people ineligible for stimulus funds even though they may be doing work that’s now considered essential. “The people who were the most vulnerable are still the most vulnerable.” 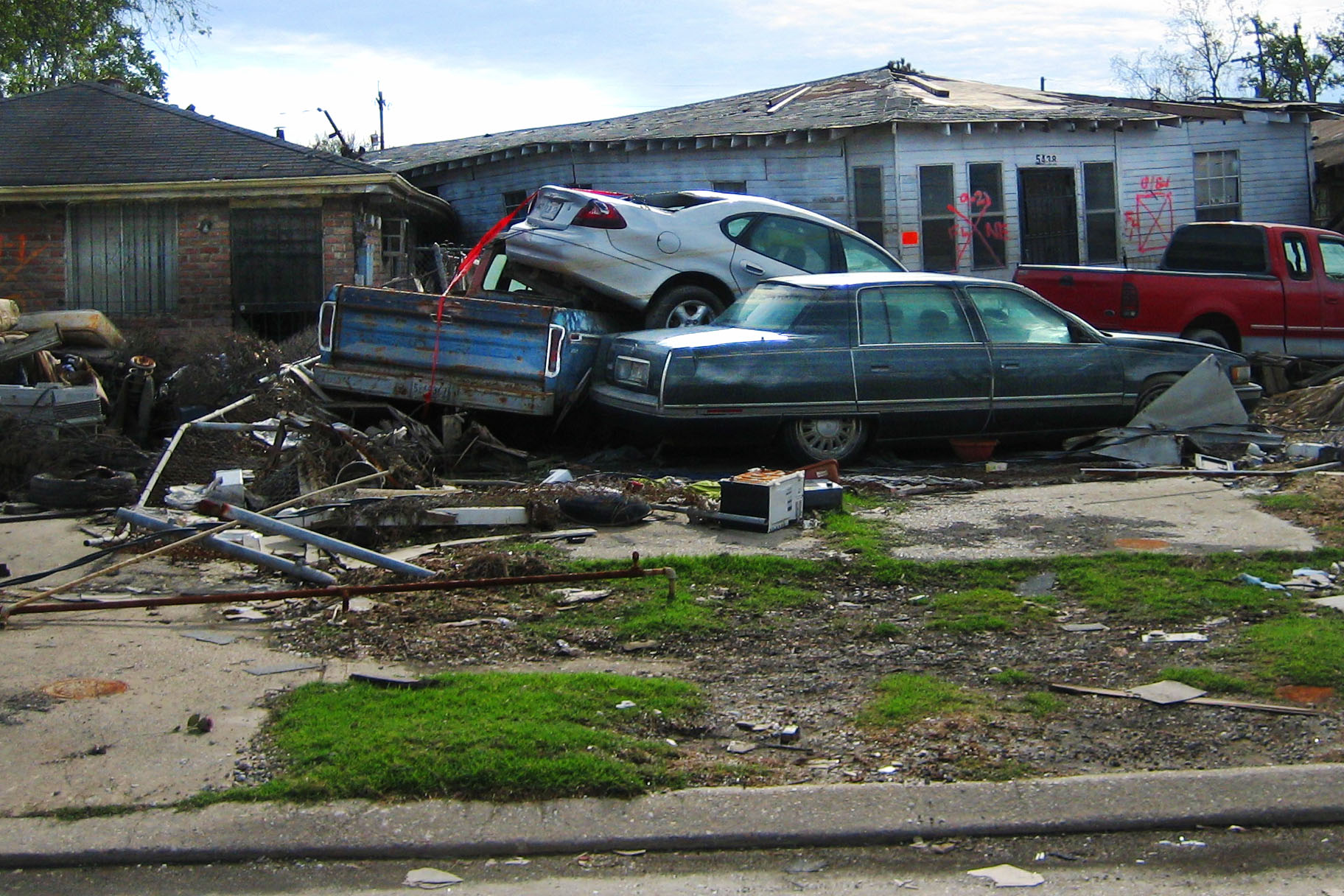 In New Orleans’ 9th Ward, houses and automobiles are in piles after Hurricane Katrina. (Photograph by Infrogmation)

A disaster like the coronavirus places a certain obligation on scholars like Shepard. “One of the ways that we can show people that what we’re doing is valuable to their reality today is by engaging with disaster and showing what people don’t know,” she says — “helping people to make sense of what’s happening around them.”

Wiesinger has conducted extensive research into the 2011 earthquake, tsunami, and subsequent nuclear disaster in Japan’s Tōhoku region. Specifically, she studies how that catastrophe and others are represented in film and theater (indirectly inspired by the Tōhoku events, her play Waters Rise premiered in 2019). 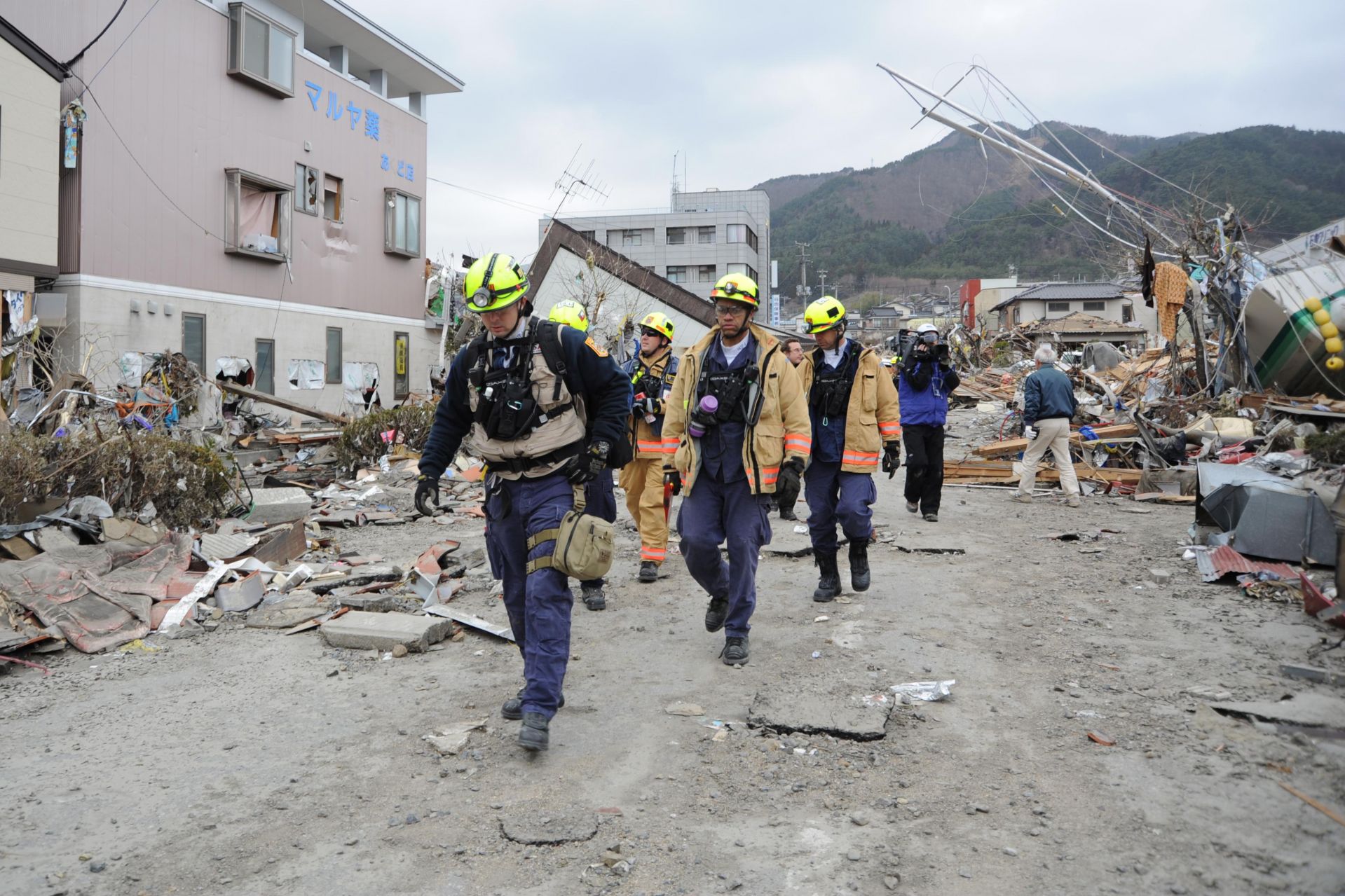 Members of a fire and rescue team from the U.S. head into downtown Ofunato, Japan, to search for survivors following the March 2011 earthquake and tsunami. (Photo by Petty Officer 1st Class Matthew Bradley)

She had planned to bring a Short Term class to Japan this year, so Wiesinger has followed the progress of the outbreak there since early February.

Still, Wiesinger notes, there are parallels that are hard to miss. “We continue to see, in my opinion, a tendency toward slow and ineffective responses from the central government.” Japanese Prime Minister Shinzō Abe’s “rhetoric has been critiqued as frequently meaningless, impenetrable, and avoidant of responsibility,” she says — a “tone-deafness that’s being widely criticized in social media.”

For instance, “his policy of providing two protective masks per household has been mocked in memes on Twitter using iconic pop-cultural families trying to decide how to divide up two masks among multiple people.”

“In some senses I think people throughout Japan are coming into contact with the absurdities of a leadership that is often more concerned with economics than human life — whereas after 2011 it was mostly just people in the rural Tōhoku region who had to contend directly with similar approaches.”

Wiesinger adds, “Many of us are encountering similar problems in our own countries and these tendencies will have to be confronted worldwide. Sometimes disasters give us the opportunity to clearly see where the cracks in our value systems lie.”

Bates commencement slated for May 29; Tutu to speak